Peeling Away the Effects of Sandy; Boats Get Royalty Rocked & Rolled

As far as realm rockers go, Sandy was a Richter scale buster for LBI.

While the mainland seems to have adjusted fairly quickly after Madam Superstorm, the Island still isn’t sure what’s what – or what’s to be.

A few shops have reopened, including a number of oasis coffee shops. A decent number of other hardcore LBI businesses are hoping to get registers buzzing real soon.

On the other side of the waterlogged coin (huh?), many Island businesses that traditionally try to hold on for the Christmas shopping season have given up that ghost of a notion.

But, bank on this: There’s absolutely no doubt that seasonal businesses will be up and properly running by next spring. It’s gonna take more than your everyday superstorm to sink this Island.

SANDY PEELS AWAY: Almost like Sandy’s wind bands, the storm’s damage keeps coming in waves. As the Island opens further and further to returners, the storm’s toll continues to rise to the surface.

Every day, more and more first-timers are arriving to have their sinkingest fears fulfilled. Even second time arounders, who thought they had already removed the ruinedness, are returning to discover new and often deeper down water damage.

And Island curbsides grow heavier and uglier. Never has so much trash gathered so thickly on such a densely developed Island. It’s often a surreal-looking overload.

There is talk of reopening a landfill in Little Egg Harbor, maybe call it Sandy’s Place. It would be, exclusively, a repository for all Sandy hath wrought – and which is now further rotting.

Even with a pit in place, it would then be a case of rallying caravans of trash trucks and dump trucks, much the way heavy plowing equipment pulled together right after the storm. I’m just not sure that trucking types will rally as readily.

I hate to even hint at this but health hazards might arise should street shoulders stay piled high with debris containing who-knows-what. Luckily, we’re in cooler times. Still, it’ll soon become imperative to get thousands of tons of indiscriminate debris rolling outta here.

MY HURTIN’ HOUSE: I spent Sunday in my own trenches, trying to sort through watered-down things, trying to differentiate between those that were ruined, badly damaged or were collateral damage, i.e. only slightly wounded by the flood but being thrown out as part of this odd – and disheartening – resignation that it’s easier to discard just about everything.

While I’m not big on tapping our government for anything, I’ve quietly begun reading up on FEMA’s helping handiness. It’s the first “Best Seller” I’ve read in ages.

By the by, I’m hearing some incredibly upbeat reports from those who contacted FEMA early on. How can we not thank our president and governor?

A weekend family I know had removed their home’s saturated, wall-to-wall rugs and were feeling decently about the sturdy wooden floorboards below. I checked on their house yesterday and found virtually every frickin’ floorboard had turned up like the toes on the Wicked Witch of the West.

TALKIN’ SHACK: I talked with Jimmy Yuhas, the man behind efforts to save the Shack.

He’s amenable to a facsimile being built where the icon stood – as if there was much of an option.

Jim is also willing to deem the remaining pilings as adequate symbolic representation of the entire disappeared structure. Again, the options were a bit limited.

Both he and I felt the appropriateness in a 100-year storm finally stealing away the Shack.

I kinda balked when he wanted me to go and look for Shack debris. I told him I would put out word that anyone in Stafford finding an old hunting shack in his or her yard, please contact me. Watch me get calls about a dozen of ’em. “How about this one, Jim? Ring a bell?”

It’s weird. I became a co-host of the annual parade six years ago. Since then, two have been cancelled because of storms. Prior to that, not a single parade had been cancelled.

BOATERS GET ROCKED: I talked with a load of boat owners who fared horribly in Sandy’s wake.

You know you’re in a mess when you go to the marina, ask where your boat is, and get handed a pair of binoculars.

Many mainland captains who had side-yarded their vessels are still out there cruising the neighborhood, trying to sort through flotillas of breakaway boats, trying to extricate Fishin’ Fool and What, Me Worry?

While many flood-loosed, free-roaming vessels now sit on sedges or in bay meadows, often no worse for wear, a couple mariners I talked to had their stored vessels utterly ruined on the spot. They had, advisedly, removed the plug to allow rainwater to run out. Holes are equal opportunity openings: rainwater out, floodwaters in, makes no never-mind to a hole. Those unplugged boats were essentially weighed down where they sat, as floodwaters rushed in and filled to the gills, not to mention the uninsured electronics.

I know of at least one “Come get your frickin’ boat outta my front yard,” call. It was among neighboring residents in Beach Haven West. And it had a gnarlier angle. The boat had done a bang up job on the neighbor’s house as it settled in. There’s one for the courts.

As I noted in here last week, the state is advising boat owners of where marine police have located their vessels. They have 30 days to come and get them. After that it gets kinda interesting.

RE-TRUCK ME: Well, I’m back in the saddle again.

Barlow (GMC) on Route 72 made me a “certified used” offer I couldn’t refuse – and it was bright red, much less. I’m sporting a Silverado, with crew seating. By the by, that fire engine toning adds a high-viz factor when driving road, field and stream.

My new “buggy” is so similar to my drowned Sierra that I won’t be missing a stride when it comes to exchanging waves from passing cohorts. Of course I will be fielding a few hundred, “Wow, you got your old truck back.”

Truth be told, I’m not big on change, though a lottery win here and there would be nice.

In my new buggy, I did give up bed length for people pleasures. It has a four-door set-up. That means I can now jam tons of dignified junk inside the vehicle, for safe and dry keeping. I think I can finally collect “dry goods,” whatever the hell they are.

Expectedly, local car dealerships are getting busier by the day with what amounts to flood overflow business – almost exclusively folks looking for new vehicles. Show-offs.

CLASSIC ANOTHER SANDY VICTIM: The Southern Ocean County Chamber has suspended the 2012 Long Beach Island Surf Fishing Classic. That’s a first in the event’s 58-year history. It was a 100-year storm, so the math makes since.

Per a communiqué I got from Michelle: “After conversations with the Chamber’s Executive Committee regarding the impact of the hurricane on the overall safety and integrity of the tournament, the Classic was suspended as of the last day before the hurricane, which was 10/28/12.”

As for those who shelled out the entry fee, the Chamber is trying to see if maybe that can be extended to next year’s event. There’s some legal stuff to be worked out.

I will note that a huge factor in that decision was the legal implications of encouraging over 600 anglers to hit beaches barely recovered from an historic erosion hit.

I sure hope fishing folks don’t hold this against the tourney as a whole.

SANDY VERSUS OLD ’62: While there is no doubt that Sandy was epic and approaching “all-time,” there should rightfully remain some questions regarding which was the more kick-ass storm, March ’62 or Sandy ’12.

When it comes to drowning former high-water marks, Lady Superstorm was in a flood league of her own. She dwarfed ’62. One for her.

When it comes to the fastest rising high tide seen in Jersey’s white man timeframe, Sandy again takes the soaked cake. Fairly official reports had the tide rise three feet in less than 8 minutes. I saw that rapid rise factor firsthand. Another one for the girl.

However, for plain old gnarliness and utter terrorific sky fury, old ’62 – which literally powered oceanfront houses all the way down onto the Boulevard – remains the kick-assiest storm to modern date. Sure, many more homes are on pilings now, but even so, the fury factor of March ’62 simply wasn’t here during Sandy. Had I tried a height-of-the-storm hike from Ship Bottom to Surf City at the peak of the March Storm, this column would be owned by someone named Melvin or Biff.

LET FREEDOM FLY: Now that LBI access and transiting has been freed up from the vice-grip of “Disaster” rule, I want to join the many folks thanking the police and National Guard forces for taking such good care of things hereabouts.

At the same time, I have to admit that during the closure of the Island, I experienced, albeit on a mini-scale, what life must be like in an occupied nation.

Don’t get me wrong. The near-Martial Law was all good – and well needed – in the immediate wake of the storm. But the sense of paranoia I got when driving or even stepping out onto the road – to be put upon by authorities wanting to see my papers, so to speak – added a whole new feel to Veterans Day for me. I can’t comprehend being under that plunger of power policing, year in/ year out.

Seeing our police officers now back to their friendlier, public service mode, is a soothing indicator that things are getting back to normal.

Personally, I’ll be getting a whole new set of U.S.A. flags to display this year, though the ones that got flood-soaked – and now show a bit of color drift – do offer an added story of their own when unfurled.

I saw a fellow who had done some plugging, mid-Island and had a keeper bass to show. However, he had his session shortened by the heavy equipment doing beach fixes. The Island is filling up pretty fast and with the lights off, it can be a bitch just pulling onto the Boulevard, mainly mid-Island.

RUNDOWN: I saw some fishing success from boats near Barnegat Inlet taking nonstop schoolie bass on spot, jigs and even on umbrellas (actually that troll was outside the inlet). Outside the one plugged fish I heard about yesterday, I haven’t seen many folks working the surf. I’ll try later today – after putting in another day helping folks lighten their flood loads.

Though most folks lost their spot pens to the storm, there are still spot to be had via shop and whatnot. They’re sure-shot bait.

This is also the season of the jigheads, especially Spros and Wildeyes.

Surfcasting is mainly bait-based, though I hope to soon get back to plugging.

Refrozen bait sucks. I know many a home was without electric, then got it back – all before folks returned. Even though the bait only got slightly soft, the rehardened bait just hold rancid oils. One exception is salted clams.

Of my ten-some tackle boxes, only a couple garaged ones got floodwater inside. Talk about ugly. Still, it was just the hooks that rotted – instantly. It’s simply re-trebling time. Something I do anyway. Just remember to also change out any low-grade split rings. You’ll know them by the rust.

For any rust-stained plugs, go out of your way to track down some Whink, in the brown rust-colored bottles. Go online and buy a case of it the way I did. It’s a miracle on rust, be it plug stains or boat stains. Just make sure to fully rinse any item or area after Whink has done its rust-removing magic. 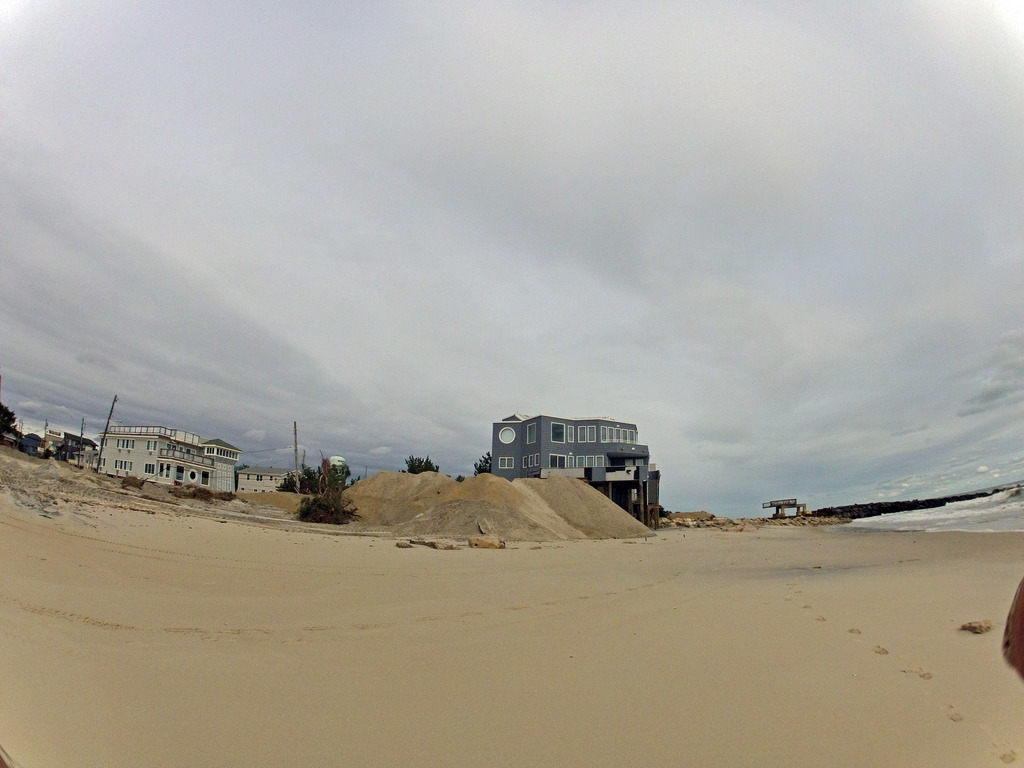