Windmill Wheels Go ’Round and ’Round; Leadfoots and the Causeway Don’t Mix

This is one of those politicized weeks, i.e. a bitch-a-minute – assuaged by a pretty sweet “Rundown,” with blue, bass and drum galore.

As a launch, I have to mention the huge, big-buck boost the Fishermen’s Energy wind farmers got from, uh, some guys all named Fred. No, wait; make that the feds, not the freds. A little typo while I was taking notes.

Many coastal folks have been energetically eyeing the effort to build rotary wind farms off Barnegat Inlet. Lately, the waters have gotten a bit muddled.

Fishermen’s Energy was recently denied a state-level permit by the New Jersey Board of Public Utilities. The BPU boys said the projected cost of the energy plan – $263, per Reddy megawatt hour – was too high and could end up shocking ratepayers. Fishermen’s Energy rapidly appealed the decision, claiming that those projected costs were a buncha BPU BS – and assuring anyone who would listen that megawatt costs would be significantly lower, likely under $200. The muddling thing is the way the U.S. Department of Energy (Energy Department) couldn’t care less about state permits, per se. The department just dedicated a luscious lump of high-energy greenery to three national wind projects. The total grant amount is $46.7 million. Hell, that would be a decent start of my electric bill.

That grant potential means the projected cost numbers for each Reddy megawatt have to be recalculated, re-bean counted.

While such a recomputing will surely lower projected energy costs, there is the unslight variable regarding how the dangling $46.7 million will be divvied out among the three national wind energy projects – which could create a bit of a Catch-22, by my thinking.

Firstly, the project closest to Reddy-to-go status might very well get the electric lion’s share from the freds. However, until a specific amount is assured, the NJBPU won’t permit, which means the project can’t be accelerated to get at the better bucks. Did ya catch that 22? Me either.

All that said, I’ll out-limb myself by saying I fully and irrevocably support wind energy. No ifs, ands or buts.

I can already hear the screaming, tearing of upper-end clothing and gnashing of chemically-whitened teeth by beachfront homeowners, fearing an eye-soring congregation of windmill blades sky-lining our ocean horizon. I, also, harbor a touch of scenery-loss sympathy for ocean-gazers but would you prefer OPEC battleships on that horizon?

OK, that was a bizarre stretch, but before the sands of my three-minute-egg timer of life run out, I’d sure like to leave future generations with all these really cool-looking, whirling things out over the ocean.

“See those swirling things out of the ocean, Larggark? You can thank someone named Jay Mann for those.”

“Damn if anyone knows. When we took over this planet and wiped out all those obnoxious creatures that lived here, we thought we’d leave ’em there since they look so cool.” 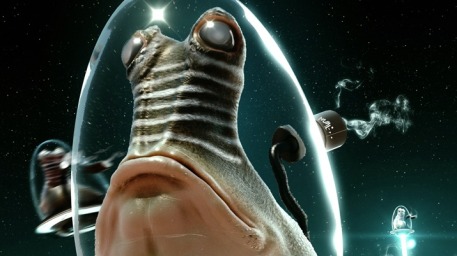 Hey, I didn’t say how far into the future the windmills would be appreciated.

Anyway, it once again looks like Fishermen’s Energy is in the captain’s chair in a rush to get crankin’ with alternative energy. Wind-powered, energy-generating devices are very likely on the horizon.

As for fishing out on the farm, it’s hard to say whether or not that’ll fly. I’ll be pushing for it, especially at the next Intergalactic Council on Planetary Take-Over Etiquette.

CAUSEWAY CAUSE FOR CONCERN: If you’re a frequenter of the famed span twixt LBI and those strange and exotic lands across the bridge, you know things aren’t exactly safe in the Causeway construction zone, as the new bridge is being built. But I’m on a bit of a bender regarding traffic crossing that bridge, particularly eastbound. I balk at the humorous road signs alleging a 45 mph speed limit. 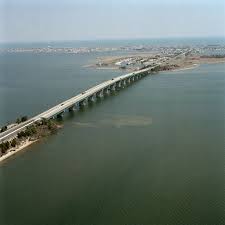 Being primarily a denizen of the right lane – what we used to call the “slow lane” – I travel at close to the un-assigned speed, by that I mean 55 mph. Drive the assigned 45 mph, you risk getting creamed from behind. In fact, even at 55 mph, I indubitably get a rear-view mirror full of the infuriated faces of antsy motorists on my ass.

But it’s the speed freaks in the left lane that have me sweating out my bridge crossings. Left-lane leadfoots will pass me as if I’m broken down, fixing a flat. I peg some low-flying passers as doing 70 mph and up – as they accelerate down slope, into the shoulder-less stretch of roadway with scary-close concrete barriers poised to move nowhere if struck. Just one sideslip-up by a belligerent driver can send two lanes of traffic catastrophically pin-balling between the barriers.

It recently hit me why eastbound bridge traffic has begun pushing the reach-the-beach speed envelope. A long-standing, un-ignorable, surely menacing, speed deterrent is gone. We all knew the boys in blue all but lived at the base of the Big Bridge. It was no secret. They’d hide in plain sight, smack dab in the middle of the grass median. Nobody with a sand grain of local knowledge was crazy enough to go balls out down that bridge. Now, that fear is gone. It’s the proverbial pedal to the metal for way too many maniacs. 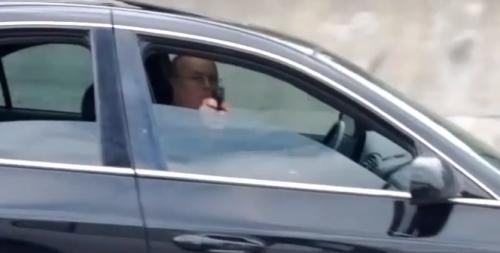 Personally, I’ve prepared for the not-so-good. I now have a dash-cam running, fulltime. If some out-of-control, left-lane lunatic wipes me out, just let him/her allege it was my fault, i.e. that I crossed the line and caused the wreck. A bad driver might have the best excuse but I’ll have the living proof – providing I’m still as living as the proof.

Anyway, I see a bad-driving moon rising this summer over the Causeway Bridge building zone. Even when driving safely, you’re far from safe and sound. Per usual, defensive driving is the best route to go, especially when accompanied by the likes of a $50 Blueskysea Dashboard Dashcam.

BUNKER DIE EASY: I had calls about the bunker die-off just to our north. It was big and, at first, unexplainable. Early guesses included algal poisoning – or lowered dissolved oxygen from algal blooms. That didn’t work for me; too early in the algae season. Plus, I knew better – from my years as a keeper of saltwater fish tanks. It was a clear case of hypoxia, i.e. death by suffocation. In fact, suffocation die-offs are fairly common menhaden phenomena, dating back to days of yore. There are scores of archival accounts of menhaden suddenly going belly-up – sometimes by the millions. But why, in this case?

In spring, bunker in massive numbers – made a bit more massive with some of the conservation measures now in place – flee in something akin to blind terror, chased by a perennial spring onslaught of utterly voracious predators, mainly bluefish, stripers and weakfish. Through a sometimes lengthy stalking process, predators chase – or purposely herd – bunker into shallower and shallower water, where the forage fish become so compacted they can’t find adequate oxygen.

The key word here is adequate oxygen. Metabolically high-demand bunker, when jammed into what we call balls, can quickly deplete the dissolved oxygen within even highly oxygenated water. Most often, this occurs nearshore, within rivers or lagoons.

I have this unorthodox belief that nature takes something like pity on fish that are pretty much alive to be eaten by other creatures. It allows the likes of bunker to give up the ghost very quickly. In practical terms, it doesn’t take much to kill a bunker – though they have great life tenacity as a biomass.

WELCOME HOME, ROCKY: Rocky the Manahawkin Bobcat – or not – is back with its owner, Ginny Fine. The courts returned it to her on Friday. “I’m amazed with the decision. I thought it was a done deal that he (Rocky) was going to be taken away from me. I’m ecstatic,” said Ginny.

The cat had gotten in hot water after going missing – a couple times. The most recent out-and-about event, in March, led to something of a bobcat manhunt, manned by police, animal control, friends, neighbors and media. I’m fairly certain the hounded bobcat holed up beneath uninhabited houses in the general vicinity of its BHW home.

When re-found, Rocky was immediately taken away from Ginny, leading to a nationwide media buzz.

Authorities with the NJDEP Division of Fish and Wildlife had demanded Rocky be confiscated. The Division cited state regulations prohibiting private ownership of certain wild animals, including bobcats. Rocky was taken to a holding cage at Popcorn Park Zoo, Lacey Township.

As to how the cat was returned to Ginny, it all came down to, well, inconclusiveness.

In an effort to get her cat back, Ginny and her attorney had mounted the defense that Rocky was actually a bobcat hybrid. An ambiguity in state wildlife regulations would allow a bobcat hybrid to be privately owned. At Ginny’s initial hearing, the judge ordered a blood test to determine Rocky’s DNA makeup.

The blood tests could only determine the motherly mitochondrial side of Rocky’s DNA. His mom was every bit bobcat. But it was impossible to establish if Rocky was anything less. Based on that DNA uncertainty, the judge returned the cat to Ginny.

I don’t know if it’s appropriate to thank a judge for a good call – since all verdicts are assumed to be good calls – but I think the cat give-back was the way to go. It certainty set Ginny to openly celebrating. She had fully prepared for the worst.

“I had made arrangements with a friend in Florida to take Rocky,” she said.

Not that she was delighted with the possibility of sending her pet to the Sunshine State; she simply had greater qualms about giving it over to Popcorn Park Zoo, which she felt would be too traumatic for such a domesticized cat. “To be on display like that wouldn’t be right,” Ginny said.

Not that the zoo didn’t covet the comely feline. In fact, Ginny worried that Popcorn Park was openly vying for the cat’s affections, so to speak. To be sure, a cutesy bobcat would have been the talk of the zoo walk.

Despite winning back her big cat, Ginny didn’t get out of court unscathed. At the behest of the prosecutor, she was fined the “maximum amount” for violations, including allowing a pet to run at large. With other assorted expenses, she must pay $1,300. Fines include charges for a dart gun and dart, used in a failed effort to capture the cat after he had escaped in March.

As for future Rocky misadventures, perish the thought, said Ginny. During Rocky’s legal stay at Popcorn Park Zoo, Ginny used publically raised money to make significant bobcat-friendly improvements to both her home and outside kennel, assuring that Rocky won’t be going on any more great adventures.

THAT’S COLD, MAN: This is a kinda weird weather thingy. My close buddies at Lee Brothers Cranberry, Inc., had to fight a frost – this past weekend! I kid you not. Mid-May.

How low did it go? Steve Lee IV took a nasty, 27-degree reading at the family’s bogs over Chatsworth way. That’s not frosty, that’s freezy.

Just as weird, at 11:30 p.m. that same night, the air temps were well into the 40s, with a slight cloud cover. However, the clouds suddenly dissipated before midnight and the thermometer all but fell off the wall, dropping almost 20 degrees in a flash.

The temperature plunge couldn’t have come at a worst time, as cranberry vines are moving into their highly sensitive blossoming time.

Steve rallied to head off any cranberry-thwarting impacts from the subfreezing temps by turning on a sprinkler system, more commonly used for irrigation.

As we say in the farming biz, “Nice save.”