The following is anything but an amusing story. It’s just so frickin’ freaky that outdoorists like myself have to say, “WTF?! And I’ll also be passing on any and all future organ transplants.”

I’m talking about the viral story of the Maryland gent who died last week from rabies he contracted from a donated kidney. Making matters untimingly disconcerting was the fact he succumbed over a year after being re-kidneyed. That flies in the face of everything I had been taught about rabidity – a notorious wham-bam, here-and gone, no-contest, fatal viral malady. Making matters epidemiologically freakier yet was the fact it was a case of raccoon rabies, among the rarest form of this no-prisoners disease.

Please closely note that part about it being the “rarest” form of rabies. There is absolutely no pressing need to go hysterical over every raccoon you now see. And we certainly have no shortage of these highly sociable mammals, famed for making themselves right at home by nonchalantly entering kitchens through pet doors – or by scurrying in with the bevy of feather-lipped, semi-feral cats you let inside right before bed.

That said, it is also relevantly notable that, amongst wildlife, raccoons are the number one rabies sufferers in the Eastern U.S. Latest stats show they make up about 40 percent of diagnosed cases, followed, close on the heels, by skunks, bats and foxes. Ninety percent of all rabies cases in the nation involve wildlife. 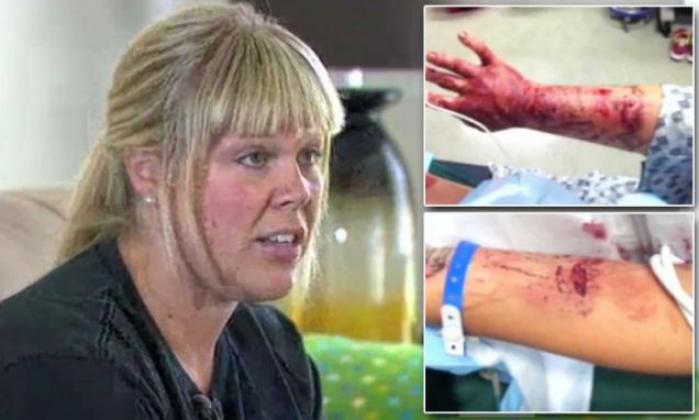 So how does one tell rabid raccoons from merely ravenously foraging raccoons – all coons being full-fledged gluttons?

A very rough rule of rabid thumb: Any raccoons out-and-about in broad daylight, acting oddly and sorta dumb-like, just might be a redneck. Wait, make that rabid. (Hey, even a rabid raccoon doesn’t wade into muddy rivers, reaching under logs to allow 50-pound catfish to latch onto their arms. That madness will be visited in some future rabid redneck column.)

One annotation to that daylight rabid raccoon rule of thumb. We’re inching into the one time of year that doesn’t always abide by thumbs. Spring is when coons will shed their nocturnal disposition to feel their diurnal (daylight) oats – before wolfing them down. Thus, that masked marauder looking longingly in through your storm door is far more likely rubbernecking for some vittles. (Above: Borderline odd raccoon behavior. Below: Unsavory coon could be a carrier.)

So, for now, we’ll run with the “behaving oddly” angle to hallmark rabid Rockys. (Damn, you know Baby Boomer life was easy when all that mattered on a daily basis was to be plopped down in a timely manner as to not miss a single second of the “Rocky and Bullwinkle Show.” And talk about twisted adolescent angst. I couldn’t get enough footage of that Pottsylvanaian hottie, Natasha Fatale. “I’m movin’ there, dude. I wonder how to transfer my grammar school credits?”

With my Rocky training in mind, I’ll note that a rabid behavior commonly seen in our local coons is when an otherwise normal-looking coon suddenly dances in front of your car draped in an Old-and-New Shop aloha shirt, wearing ill-fitting Michoacan sandals, and singing, “Mammy, how I love ya, how I love ya…” Call animal control immediately. Describe in detail. By the by, I constantly warn that shop to refrain from throwing unusable stuff into their outside Dumpster.

Bad stuff momentarily aside, I have to throw a bone to these indigenous creatures. Studies show raccoons are extremely intelligent – so, just maybe, they could learn the words to a Gershwin ditty. (See origins, “Mammy, how I love ya…”) In studies, they can remember solutions to assigned tasks for as long as dogs. It’s unknown how they would fare against dolphin brains since the stodgy ASPCA won’t allow them to be tossed into the ocean for comparisons. Killjoys.

For you academians, the word raccoon comes from Native Americans, who were unendingly amazed with the animal’s uncanny ability to do things with its front paws.

“Hey, buddy. Yeah, you with the buckskin pants. Pick a single card from these three. Huh? Yes, those are naked squaws on top of the cards. That’s not what’s important right now. I’ll bet you two wampums you can’t follow your card while I move ’em around like this.”

Anyway, Algonquian speakers, i.e. our Lenape, called these three-card Monte mammalsarahkun, from the word arahkunem, meaning, “That little bastard just ripped me the hell off.” Not true. It means “he scratches with the hands.”

Arriving pale faces, who already couldn’t hear straight after banging around in the ocean for half a year, heard “raccoon,” not arahkun. It stuck, even after the Indians kept repeating, over and over, “Arahkun, you idiots!” – before finally getting so pissed off they commenced with the First Raccoon War of 15-something. Wait, I better make that the First Arahkun War of 15-something. This political correctness thing is exhausting.

But back to that poor Maryland guy. You remember him, right? Talk about bad luck. It appears he got a donated kidney from a good-hearted, albeit deceased, outdoorsman, a former Air Force mechanic. The donor had apparently been infected with raccoon rabies while hunting in North Carolina.

At the time, doctors misattributed the donor’s passing to a stomach virus. Well after the fact – as in last week – they went with the raccoon rabies conclusion. It couldn’t be determined if he had actually been bitten. More likely, the man contacted the virus through an open wound that was exposed to the saliva or brain matter from a bagged coon. That’s actually kinda sickening all on its own, rabies notwithstanding.

To his credit, the donor was a devout outdoorsman. His spouse was quoted as saying, “He did a lot of trapping and hunting and stuff. … He didn’t care what the animal looked like. He just picked it up.” Eeks. I think I might be related.

By the by, there’s no picking up rabies from simply contacting just the blood of an infected animal, as in when skinning. However, it isn’t far up the anatomical ladder to reach the inner organs with saliva and brain juice, especially when frivolously placing a freshly removed raccoon pelt on one’s head – you know, just for laughs. Sorry, but it’s not that rare a stunt. I hate to admit it but I’ve done same – though my taxidermilogical headwear comes strictly from road-kill that I don’t want to go to waste.

“OK, who doesn’t have a raccoon cap yet?”

So, now it’s a waiting game to see what the always fun-loving folks at the Centers for Disease Control have to say about time-released rabies. Semi-fortunately, this go ’round they only have this one victim to write about. Somewhat inexplicably, three other recipients of organs donated by the same hunter show no signs of the illness. Of course, that’s one phone call you don’t want to get after a hard day.

“Uh, Mr. Martin, you remember that organ you got awhile back? It turns out it mighta kinda been rabid and stuff.”

“I swear, if this is someone with Sallie Mae I’m going to find you and kick your sorry ass!”

In passing, this wasn’t the first case of rabid internal organs making it into the mainstream bloodstream. In 2004, four organ transplant recipients in Texas died from transplanted rabies. That same year, three patients in Germany also died from rabies-contaminated organs. That does not alleviate the freakiness.

Maryland in now mulling over a law requiring all donated organs to undergo a rabies test. Can’t happen. By the time such tests are completed, the organs will only be marketable on the Asian traditional dried medicine market.

For now, I’ll keep you posted on any aberrant coon behavior in our parts. SLIMIEST OF POACHERS: Last week, there was a serious bust over the illegal taking of glass eels in Atlantic County.

The enforcement crew at Fish and Wildlife netted three New England poachers with over 24,000 babiest of eels in-hand – actually, they were confusedly swimming in aeration tanks. The DEP had been tipped off to the rip-off. 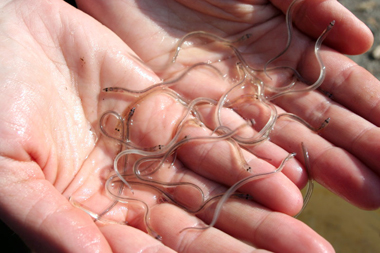 Disturbingly, it’s unknown how many trips these slimy scum buckets had made before getting caught.

Glass eels are the see-through young of American eels. They are just now blowing in all the way from the Sargasso Sea, to restock the biomass.

It is my avowed, outdoorist duty to alert folks to potential poachifications hereabouts.

Our Ocean County nape of the saltwater meadows is a prime target for these eel thieves, who are feasting on our stocks, fiscally speaking. Glass eels are currently netting millions of yen-ish dollars in profits. The Japanese are just about paying a buck each for them. Should I reiterate that 24,000? That is merely a few-hour take? Glass eels are the equivalent of squirming gold. 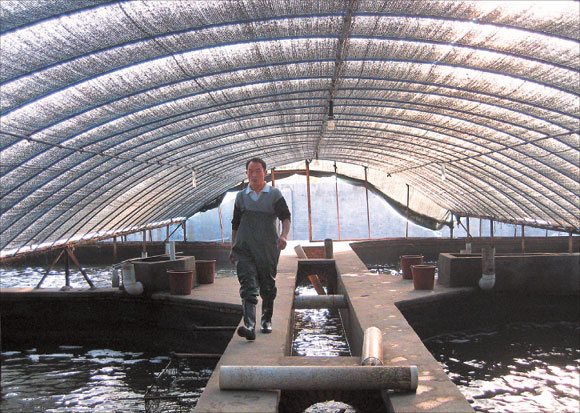 (Above: Japan eel farming has driven poachers to make some extreme moves.)

New England and Canadian poachers are most menacing. Until recently, they had been legally harvesting glass eels, while perfecting their glass eel nabbing talents. We surely have to worry big-time about those damn northerners. (Wow. I sounded like a bona fide, tobacco-dribbling redneck there.) Those from-up-there poachers are dangerously adept at wrangling glass eels into easily concealable fyke nets – long tube-ish nets that look like a windsock made of netting.

Pro poachers can denude a creek of every ever-lovin’ glass eel that arrives, indifferently wiping out the future of American eels for all of us.

I will, at this point, admit that I have glass eeled – when it was fully legal. Gospel truth, I stopped after two seasons, despite some sweet money. It took only two harvests for me to realize the insane and instantaneous biomass destruction. I even tried to discourage others. My harshest shut-upists were some state police officers, who were ravenous glass eelers.

But, back to the current crime wave against eels and our fishing society.

These cruising cretins are all too atuned to the dangers of being caught in prime glass eel habitats, like Tuckerton Creek. They are now homing in on more hidden creeks. And we’ve got creeks out the kazoo.

So, I’ll take care of guarding the more out-there waters if you’ll keep an eye on roads heading back to the easier-to-reach waterways.

I don’t want all y’all to get over aggressive, just keep a well-honed eye open. Any pickups or SUVs tailing tags from New England states or Canadian provinces seen frequenting back-bay accesses need to be noted. Report any sightings, especially if those vehicles seem to fit the bill of glass eel hunters, i.e. loaded with gear (aeration equipment), or even containing passengers seemingly reluctant to make eye contact in passing. Do not try to stop or approach. Those numbnuts have been known to bear arms.

Of course, there is also a very real threat from NJ’s very own poachers, though the ramifications of being caught in-state are surely severe, including nasty-ass fines, public disgust and long-term or even lifelong relinquishing of all rights to hunt or fish in the state. However, I’ll repeat: I guarantee there are poachers out there right now.

Anyone observing what they suspect is illegal fishing activities should contact the DEP hotline at 877-WARNDEP (877-927-6337).

Raccoons are neat animals. But there was one last year taking a stroll up the street around 11 AM . You could tell there was something wrong, though. He went scampering back into the woods. I don't think they live long after contacting the disease.