That Hair Is Here for Protection;Storm Saturn Was a Superfreak

All ye bearded anglers, take note: A study has found that facial hair is a sun fighter of the highest order. My beard applauds this finding – an odd sound if ever.

The details arrive via hirsute researchers at the seriously sunned-upon University of Southern Queensland, Australia. Their facial findings were recently published in theRadiation Protection Dosimetry journal. Sadly, my subscription had just run out before this report so I had to get the story via email. Those Aussie researchers found that beards, overall, are a boon to better skin, lower skin cancer risks – blocking 90 to 95 percent of UV rays – and even better asthma resistance. Yes, all those chin and cheek hairs rise up to help filter out asthma allergens. There is no mention of how often the filter should be changed, per se. Maybe when you change your smoke detector battery. Just guessing, mind you.

But the study didn’t hold to merely the health and welfare bennies of beards. A goodly portion of their findings focused in on “the look.” It might now be said that scientific studies have proven that a sleek, well-groomed facial coiffure assures that you’ll be a standout to the opposite sex – though I’m thinking that refers more to bearded men.

OK, so some of you gals who like men with baby butt faces are hissing, “How did they come up with that beard stuff?” And you’re right to question – since your taste in men is obviously questionable. I’ll have you know that those researchers in the heavily bushed Land Down Under used one of the most respected testing methods known to the entire world of science: they left bearded mannequins – along with far less attractive, follicley-challenged ones – in the blistering sun of the Australian Outback.

After days of solar cooking, the sunnyside-up mannequins were studied for stuff like radiation absorption, wind damage and unprovoked abuses from passing schools of kangaroo. (Hey, how the hell should I know what they call a slew of kangaroo?) The beards worked wonders when up against some of the planet’s harshest elements. Of course, Neanderthals already knew this.

Admittedly, further findings also detected some downsides to facial fur. Along with inviting kangaroo abuse, some infection concerns surfaced, mainly when unfettered and unattended beards were allowed to go berserk. They were tempted to call the malady Duck Dynasty Disease but knew those cable stars are heavily armed so they went with the far safer ZZ Top Syndrome, “Something ’bout a sharp-dressed bearded man …” Did you know that the drummer with ZZ Top is Frank Beard?

The study also mentioned the obvious catch-all pitfall of beards as repositories for wayward food pieces. For longtime bearders, you can tell if something awkwardly obvious has gotten lodged in your beard by closely monitoring the eyes of those you’re talking with. Two or more direct beard glances by a talker indicates a need to casually do a one-handed beard grab-and-pull. This de-itemizing move can be followed by a casual two-arm, chest-out stretch, if playing it very cool. Hey, it all comes with the territory. Overall, the beard bennies easily outweigh the woes. As for that skin protection thing, that health benefit angle can surely grow on anglers. (Above: In wild NJ, it's good to have rodent predators, like a pine snake in the grass. Give it a few bucks.)

CHECK IT OUT: If you have even a jot of appreciation for the amazingly diversified wildlife population within tiny NJ, please line-item a lively check-off donation into the Endangered Wildlife box on your New Jersey income tax return.

The Endangered Wildlife Fund check-off, located on Line 59 of Form NJ-1040, is critical to continuing the work of the DEP to protect threatened and endangered species. These are highly dedicated folks who live and breathe the Garden State’s rarer inhabitants. Taxpayers are provided the option of contributing $10, $20, or an amount of his or her choosing, toward protection of threatened and endangered species. Even if you are not expecting a refund, you may elect to make a contribution. STORM SATURN WAS A SUPERFREAK: I know I exhausted my storm-writing welcome in my last weekly blog but I just have to offer a few parting words about Storm Saturn. That girl was a superfreak. I kid you not. And I’ve been watching weather like a hawk my entire life. My first words weren’t “mamma” or “dada” but “quantitative precipitation forecast.” I was immediately placed on intravenous Ritalin. What Saturn Girl loosed was, verbally speaking, outside common meteorological wordage. What does one call a one-day storm that floods like crazy for four days, including a road closer (Boulevard) an entire day after she was long gone? Freaky, that’s what.

That said, I do want to note that some aggravated folks were getting a bit overblown in their descriptions of Saturn’s day-after-day-after-day of moderate flooding. While it was a major-ass inconvenience to be sure, I twice heard folks making genuine references/comparisons to Sandy. We both know those folks obviously weren't in the house for the Superstorm. They were bunching together all of Saturn’s moderate flooding to form a severe flooding classification. It doesn't quite work that way – any more than, say, day after day of moderate rip current risks doesn't make it a high rip current risk.

Speaking of rips, the recent storm-based beach damage was fierce. The north end of LBI might very well have gotten chewed beyond a Sandy degree, per locals there. No Island dissections, though, by a long shot.

In calibrated retrospect, the high tide readings from Saturn didn’t even inch toward established severe parameters. I’ll re-agree the daily road sinkings comprised a severely bothersome volley of flooding. However, Saturn will not be leaving her mark on any (remaining) walls where we keep high-water marks from dearly departed storms.

While Storm Saturn deserves some sort of asterisk for the above-noted freaky-deakiness, it’s now time to wonder what would possess the bay to keep overflowing long after Saturn was all but off the weather maps.

(Below: I've always told folks LBI is 20 miles long but they refuse to believe it's not 18 miles, as advertised.) 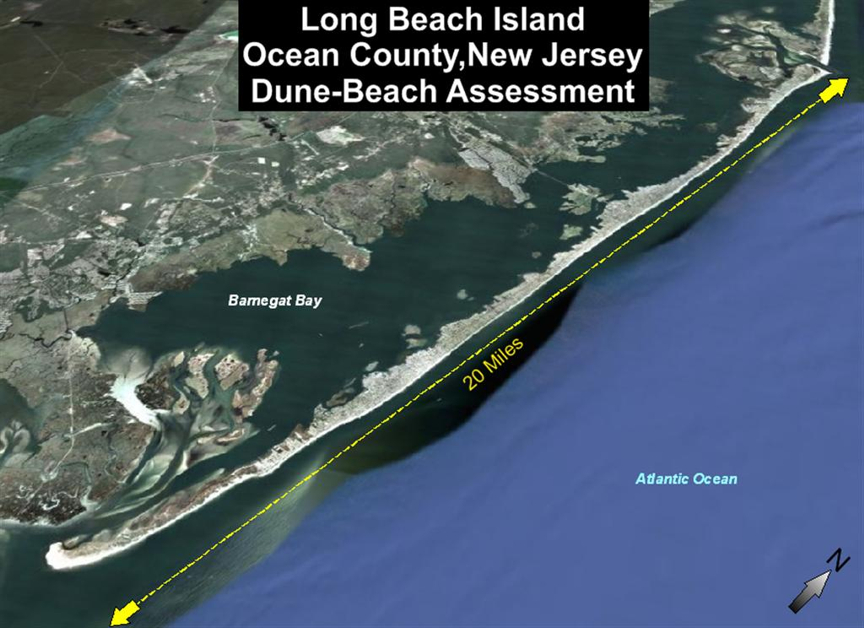 First, one has to realize the ocean was fully riled by Saturn’s consistent 50 mph winds. Even I noted that the frequency of Saturn’s rafter-shaking gusts (60 mph plus) were more consistent than Sandy’s gusts – though, again, any further comparisons to the killer Superstorm are unwarranted.

So, Saturn offers us a storm-perked, high-rise ocean. Such a sea situation is always able to power water into the bay. The problem is we’ve seen that same scenario many a time but elevated bay waters have always obediently scurried back out to sea shortly after the storm departs.

(Below) Little Egg Inlet this year. Note how little area for the tides to work with. One of the main flood culprits had to be the big, highly consistent swells in the wake of Saturn. The waves remained steady, even after she moseyed off. They kept pounding ocean water toward our inlets, preventing what is technically known as an evacuation of accumulated bay waters. As distant proof of the waves’ pizzazz, Saturn’s swells quickly reached Puerto Rico – as grinding 12- to 15-foot waves, testimony to the swell’s power.

But even the swell setup we saw after Saturn is rarely enough, on its own, to pen up bay waters for days on end. Enter my pet concept: Our bay is getting worse and worse at handling tidal waters. This is due to overall shallowing, and, most notably in this flooding case, an insidious closing off of the Little Egg Inlet area – all the way north to bayside Beach Haven.

Saturn’s floodwaters couldn’t escape even if they wanted to. Predictably, Beach Haven, nearest the piled up water, suffered worst – though many other places in the Barnegat Bay complex were also up to their gills in piled up water.

Below: Even less room to get through LEI when waves are whacking the shoals. 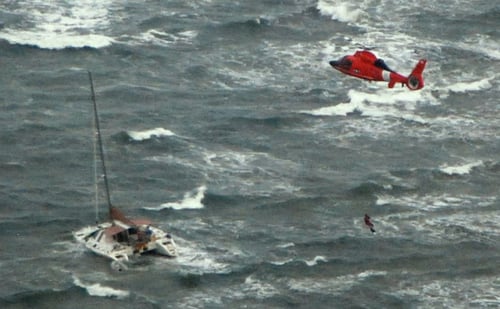 (Below) Barnegat Inlet has its own woes, mainly that sunken portion of the north jetty.

A BIT OF BASSING: The bass are kinda back – as in, barely back.

There are some small stripers being caught in the Mullica area and also near the east-facing sod banks off the end of Seven Bridges Road. It’s a chore tracking down these winter bass, much less getting them to suck in bloodworms. Still, it’s always a great outing just to get out and finally shake off what has become a mighty thick layering of winter blahs. The near-time problem is we have some very cold nights arriving, which won’t allow a warm-up of the flats, where overwintering bass come onto the shallows to sun.

I hope to kayak out to the creek flats near the Sheepsheads. Years back I did some ice-out sight fishing there on my yak – until I paddled too close and spooked the bass back into the nearby 113 hole. I have a GoPro this time so I can record the high-speed V-lines made by the bass as they spook off the eel grass beds. It shows how shallow they’ll go to get at that first solar warmth of the season – and to nab a stray grass shrimp or two.

PLUG CHAT: I’ve gotten my third email from various nearby folks who are building batches of homemade lures – and emailing pics of their poppers and such. While there’s no judging a lure by just its cover, the visuals I’m seeing through photos are drop-dead gorgeous. How their winter-crafted plugs swim is beyond words. Literally. There’s no verbally explaining their action until conditions improve enough to allow some functional test casts – when actual fish are on-scene to determine irresistible lookingplugs are truly irresistible.

I’ve worked many perfectly swimming, ideally sashaying plugs – with an in-water look that makes you wanna jump in and bite them yourself – that inexplicably all but spook gamefish. With many plugs, it so often comes down to a final micro tuning, a miniscule tweak, that makes it come alive in the eyes of fish. In fact, those crucial final tweaks mark a magical mastery of plug making. Some shapers just have magical hands.

I was recently told by a top plug maker that he once changed just the brand of paint he used to coat his plugs and damn if it didn’t launch the final action into another dimension.

As for factory plugs, many a better-than-me plugist swears that factory-made plugs, fresh from the box, need serious, albeit simple tweakings – often a mere twist of the lip.

Many pro pluggers won’t use a production (everyday) plug until they’ve traded out the hooks. That I can relate to. I won’t mention names out loud (Atom’s, saltwater Bombers, Cordells) but many companies cut corners on hook quality. Swapping out those cadmium-coated factory trebles for fully ferocious designer hooks is just about routine for me. Might that upgrade change the way a plug swims? Yep. Maybe better, maybe worse. Thus the never-ending effort to find the ultimate plug – which I’ll immediately smash against jetty stones. 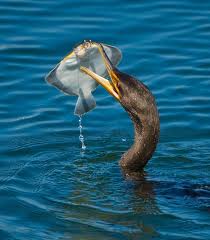