Yocom said that while he appreciates the recognition and enthusiasm over the catch, he's ready to move on.

"It was a relief to me to finally get this behind me," he said. "It's been almost six months now since we caught the fish."

Yocum has received the first of the $20,000 annual payments due him over 50 years, and most of it went to the crew of the fishing boat he used for the catch, he said. Most of next year's payment probably will go to the crew as well, he said.

After that, Yocom and the crew had to go through a review by Mustad, whose million-dollar promotion challenged anglers to catch a record-breaking fish by Sept. 30 using a Mustad hook. Yocom said he even had to submit to a polygraph test.

Despite the long process to confirm the record, DiStefano said he had no doubt the tuna would break the former mark of 405 pounds.
"We knew what we were looking for," he said. "We were aware that we had a potential world record. Once we measured the fish, we were certain, and we decided to quit fishing and weigh the fish."

So what's next? DiStefano said he wants to break this record. Yocom is open to the possibility.
"There are some nice fish out there I'd like to target," Yocom said. "I think we're planning a trip in June or July.
"But I will not be disappointed if we do not break it again," he said with a laugh. "It's kind of a once-in-a-lifetime deal. And there it is, I got it."

< NEW BEDFORD — Three of the biggest problems in fisheries management in the Northeast will be tackled soon by a top-to-bottom review led by the UMass Dartmouth School for Marine Science and Technology.

<"There are going to be four workshops conducted over several months," Rothschild said. "It's being led by Cadrin with a lot of cooperation with the NOAA Fisheries Service.

<"People from other universities are going to participate. We're basically looking to find out common elements in stock assessment we could improve."


A bill that would have allowed bans of fin-fish net pens has sunk at the state Legislature.


The measure died in committee, as did the hopes of environmental activists and Island County decision-makers.


Erickson was among those who argued passionately against allowing such farms to operate, particularly those raising Atlantic salmon.

Under the failed measure, counties and cities would have authority to legally ban fin-fish net pens.


The bill was seen by supporters as a speedy and conclusive end to what may yet prove a lengthy and trying battle with the state Department of Ecology over the county's recent prohibition of non-native, fin-fish net pens.


Erickson said he believes pollution generated by the pens and potential for transmitting diseases to native sea life are too great a risk to allow them to operate in any of the waters surrounding Whidbey and Camano islands.


"Anywhere these things are, they are a threat," Erickson said.


There are currently nine permitted pens in Puget Sound.

One is located in Skagit County near Deception Pass. Owned by Seattle-based Icicle Seafoods, Inc., it's nestled between Skagit and Hope islands, both of which are state parks.


Repeated calls to the company's headquarters were not returned.


Public testimony was so one-sided on the issue that the board agreed to prohibit net-pen aquaculture for all non-native fish.


Final approval of the development rules, however, is in the hands of Ecology officials.


Holding to a long-held position that net pens are a water-dependent use - as opposed to a hotel or retail store - and can not be simply banned outright, department reviewers notified the county in a January written cumulative impacts analysis that the shoreline plan may not pass muster.


"Although citizens may have raised concerns, it's the county's responsibility to determine if the concern has merit," wrote Cedar Bouta, with ecology's shoreline program. "Science does not support the concern."


Studies have shown that the risk of disease transfer is actually greater from native stocks to penned salmon, as "most diseases already exist in the native population," she wrote. 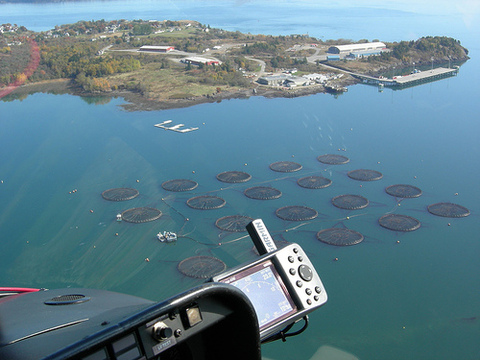 "One unsubstantiated concern is not enough to warrant prohibition of a water-dependent preferred use," Bouta wrote.


The agency is so firm in that position that it's held up final approval of Jefferson County's shoreline plan for two years.


Lawmakers from the legislative district and a Jefferson County commissioner were at the forefront of the bill.


According to Josh Weiss, director of policy and legislative relations for the Washington State Association of Counties, representatives of the aquaculture industry attended the session in opposition of the bill and there just wasn't enough support to vote it out of committee.

The issue was talked about Thursday at the association's legislative steering committee meeting, but Weiss said there isn't much hope for any forward movement this year.


"I don't think there is anything that can be done to resurrect this bill," Weiss said. "I don't see it coming back this session."


Island County Commission Chairwoman Helen Price Johnson said Monday that she isn't sure what the board's next steps will be.


All three commissioners signed a letter of support for the bill, but she could not say whether the board will continue to argue the issue or acquiesce to ecology officials.


She personally debates net pens being a water dependent use as there are examples of successful farms on land. Also, Island County isn't like other communities in Puget Sound, she said, because nearby rivers and estuaries make the area a "nursery" for wild salmon species.


"I think there is a flaw in (ecology's) thinking... we're different," Price Johnson said.


"There are just some things that are better decided at the local level," she said.


Erickson said he also debates ecology's position. Fish pens may be a water dependent use but that preference shouldn't come at the expense of the environment and wild fish stocks.

Should the state agency refuse to approve the shoreline plan with the ban in place, he said he's hopeful the board will remain firm and appeal the decision to the Growth Management Hearings Board.


Should they board decide otherwise, he said WEAN is prepared to step in.


"If the county won't, we will," Erickson said. STONE HARBOR MANOR, In a race against the clock, the Wetlands Institute, American Littoral Society and Middle Township, along with a committed group of conservation partners, will restore prime horseshoe crab and shorebird habitat destroyed by Superstorm Sandy on the Delaware bayshore in time for this spring's horseshoe crab spawning and shorebird migration season.

In a rapid assessment of the impacts of Hurricane Sandy immediately following the storm, researchers Larry Niles, Amanda Dey (NJDEP), David Mizrahi (NJ Audubon) and Lenore Tedesco (Wetlands Institute) identified the Delaware Bay beaches, critical habitat for the world's largest concentration of horseshoe crabs and a key stopover point for migratory shorebirds, as significantly impacted by Superstorm Sandy, and a priority for habitat restoration. The storm stripped the beaches of their sand.

Without sand at the high tide line on the beach, horseshoe crabs will be unable to bury their eggs, further endangering this Bayshore icon whose numbers are already low. This would also be harmful to migrating shorebirds, especially the red knot, an endangered species in New Jersey. When the birds arrive on the Delaware bayshore, they depend on the fat-rich horseshoe crab eggs to replenish their strength for the last leg of their 10,000-mile journey from the tip of South America to their nesting grounds in the Arctic. Based on monitoring led by NJDEP and Niles, these beaches were used by more than 50% of shorebirds on the bayshore during the 2012 stopover. “This project is critical to the continuing efforts to protect and restore the horseshoe crabs and shorebirds of Delaware Bay especially in light of the added blow that Superstorm Sandy dealt the area. The prospect of losing a spawning season for the horseshoe crabs and the potential for a huge impact on already endangered shorebirds made action imperative. It's been amazing to see the multitude of people and organizations that have come together to get sand on the beaches ahead of the crab's arrival. In the weeks following the storm, most assessments were that it would be impossible to make this project a reality in time” said Lenore Tedesco, executive director of The Wetlands Institute.

The project will be carried out by a partnership which includes the American Littoral Society, the Wetlands Institute, LJ Niles Associates, Dianne Daly CEP, New Jersey Department of Environmental Protection, The Richard Stockton College, Coastal Research Center, and Middle Township. More than a dozen partners, both public and private, are working to accomplish this project. Critical support has been provided by the USFWS Cape May National Wildlife Refuge, The Nature Conservancy and several Bayshore landowners.

The project partners will restore nearly one mile of beach in segments that include southern Reeds Beach, Cooks Beach, Kimble Beach, and possibly northern Pierces Point. Restoration will involve trucking in nearly 24,000 cubic yards of sand and removing rubble from several beach areas. “This is a unique project because the project design and specifications are based on creating suitable habitat for horseshoe crabs. It's not a beach renourishment project or dune construction project” said Tedesco, who has been evaluating sand characteristics and beach profiles that have been designed by scientists at The Richard Stockton College's Coastal Research Center.

"This project is unique because it's a great example of how a project targeted to benefiting the environment can also benefit local residents and the regional economy" said Mayor Dan Lockwood of Middle Township. In addition to the revenue for local businesses receiving contracts for the project, nature tourism to view the wildlife of Delaware Bay is a multimillion dollar annual contributor to the region's economy. Concurrent to this project, the Township's Deputy Mayor Tim Donohue and Open Space and Recreation Project Team have been part of a cooperative effort with environmental groups to improve the Township's Delaware Bay recreation areas to attract more of the nature tourism market.

Committee member Susan Delanzo added, “It is wonderful to see this project come through so quickly. It is for the common good and as a result of a lot of hard work and coordinated efforts of so many organizations and agencies. I think that our bay community is one of our most beautiful natural resources and we should do everything within our power to preserve it.”

The project has had strong support from the NJ Department of Environmental Protection and the Army Corps of Engineers who have been reviewing the permits required for the work. Middle Township has been providing direct assistance in carrying out the field work, and local landowners have granted permission for the conservation work to be done on their properties.

The project is funded by grants from the National Fish and Wildlife Foundation, NJ Corporate Wetlands Restoration Partnership, and in-kind contributions from the project partners. 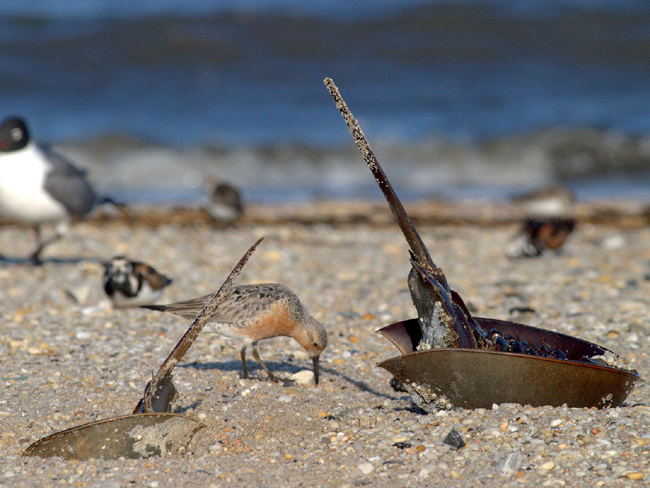