I watched this small ghost crab as he glanced over, mistook his own shadow for a foe, reared up and went into a fighting dance bobbing action. Dumbass. 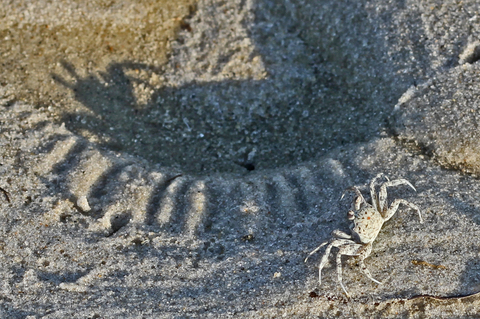 Wednesday, October 19, 2016: It’s a SPF50 day … in mid-October. Enjoy the short-sleevedness since there is some far brisker air on the weekend horizon, including a couple nights in the upper 20 – in Pineland bog areas.

Driving the beach got very testy with beachgoers coming out of the woodwork ... seemingly all of them with dogs.

The waves just won’t quit. While they’re down to 3- to 4-feet today, there are still stints are larger waves. That means the washover will be seriously showing, now being enhanced by the openings left over the last week. Those are like valleys in the sand, usually east-to-west, where the ocean now enters and exits. I bring those up since they can become brutal buggying hazards at lower tide, when their sides can present sudden drop-offs, sometimes a couple feet or more. Making it worse, it’s hard to see the drop-offs up ahead at low tide.

Ocean clarity is fair but highly fishable, plug-wise. It is also fine for bait fishing, though heavier sinkers (up to “5”) are still in order. Fishfinder rigs with circle hooks allow bottomed bait to explore the surroundings a bit.

I took ocean water temps at three locales, mid-Island to Holgate. I wasn't believing the numbers, even after repeating the temp-taking process. I had a 67.3 (Ship Bottom), 67.7 (BH Terrace) and an astounding 68.3 (Holgate). Even the water coming out of the bay was in the upper 60s.

More disturbingly unusual was the absolute lack of bait in areas of Holgate that usually have at least some forage fish flow. In fact, we should be hitting the height of the spearing and rainfish migration. I threw both my 8-foot mullet (7/8th") net and 7-foot spearing (1/4") and not even a rogue corncob mullet or larger spearing to be seen. This has become one odd fall in many ways.

I probably shouldn't note this but that odd haze in the air, especially toward sunset was actually a bad buildup of ozone. Not good ... though it adds a kind of comely eeriness to the sky.

A RARE BARE BIRD: John Weigel and Olaf Danielson are engaged in a frenzied battle of "extreme birdwatching," hoping to close out 2016 as the new North American champ of the American Birding Association.

The Smithsonian has Weigel ahead of Olaf, but by a hummingbird breath margin of 763-759.

May the best birder win. Or might that be the barest birder? I’ll explain.

I got wind of this high-flying bird-off battle through my freaky-stuff grapevine -- as more and more folks now email me about sundry oddities out there. Thanks … I think.

So, what could possibly be a-freak within the seemingly serene and sane birdwatching realm? It has to do with Danielson’s use of flesh-toned natural camo. Better put, he does his most serious competitive birding in the buff – a bare birder.

I’m not sure how his au naturale birding will fly with the oft-older birdwatchers realm. Of course, many a now-oldster hails from the free-hangin’ hippy days; they might get a gander at Danielson and be nostalgically stimulated to tear off the old L.L. Beans and commence to gamboling through the meadows, sadly lacking the look they had back in the Sixties.

Now, I’m above-average in what might be called birdwatching psychology. I’ve developed many a method to ease the fear of birds as I move near. My favorite enamoring move for shorebirds is pretending I have no interest whatsoever in them; moving slowly along, always looking the other way, as if hunting tasty berries and insects. Being fully clothes has always worked when coastal birdwatching. In fact, I can’t imagine some of the hungry looks I might garner from herring gulls if I was, let’s say, dangling about.

After perusing all my clandestine bird-approach methods, nudity doesn’t even enter into it. Nonetheless, Olaf is hoping to get a trend on through his book – and don’t jump on me, Madam librarians, since it’s the actual title! – entitled “Boobies, Peckers & Tits: One Man's Naked Perspective.”

Hey, anyone with half a grain of bird knowledge knows Olaf’s book title is playing on actual bird names. Now, whether or not the author is playing with a full deck …

While I’m not overtly opposed to naturalism – which is basically nakedness with an apparent purpose – I worry that aligning birding with bare-assedness might attract a whole other flock of birdwatcher. While that sudden popularity might be a boon to the binocular-building industry, it could add an in-field confusion to shouts like, “Look, a couple great tits!”

(The great tit (Parus major) is a passerine bird in the tit family Paridae, indigenous to Europe. How one might be loudly announced hereabouts, I haven’t a clue. … Or do I?) Below: Some great tits. Just sayin'. 
Classic weigh in for Jimmy Finn.
Jimmy's fish was caught on bunker last night on the northend and weighed 33.44 and was 45 inches long.
Jimmy came down last night just to fish on Ric's birthday. Jimmy meet Ric many summers ago when he rented across the street from him. Once Ric saw fishing rods they became fast friends and fished together whenever they could. 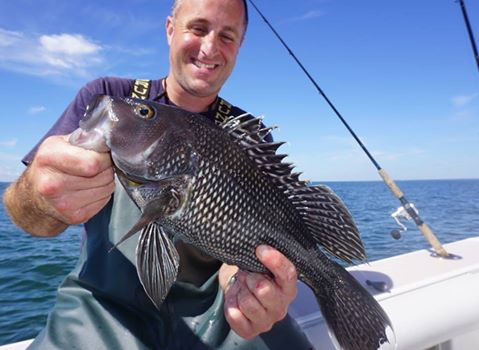 Jake returned to the west coast where he hooked a Bonnethead, which unfortunately did not make it to the beach in one piece... Soon after, he is hooked up again, this time it's a Blacktip, but there is something hanging out of its mouth.... The remaining part of the Bonnethead. Talk about a tax return! Another sneak peak . Her head and boobs will be acting like the lip for diving and her tail fin will be positioned in a way for her to glide. There will be an R version and a pg version 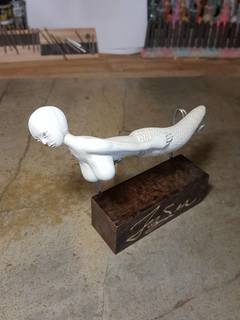