Wednesday, October 04, 2017: And then there were none. Sorry if I’m overdoing this mullet run but it’s my current outdoor shtick

Wednesday, October 04, 2017: And then there were none. Sorry if I’m overdoing this mullet run but it’s my current outdoor shtick -- after spending too much time in the office this summer.

Just like that, the mullet spigot has been turned down to mere drippage. Despite beautifully clean water, in which no nearshore mullet could hide, I saw only a couple highly separated pods; far from a “run.”

What the return of a mullet dry-run means for me is more downtime for plugging. Using small freshwaterish metals in Holgate, I humbled a goodly number of snappers, including a few that were almost take-home material – filet material for my bluefish jerky making. I have a new sauce to marinate bluefish fillets within; it has more citrus than I usually use, meaning I have to dry the meat faster to prevent it from cooking in the citric acid. Nonetheless, the sauce recipe is called “Jerking marinade.”

DEFLATED FOLLY: I have to speak of the insane showing of Mylar balloons along the entire LBI beachfront, though most notably on the south end. I have never seen close to that many balloons coming ashore here.

Below: Just a few, via

Since the balloons are just slightly weathered, evenly, it seems they come from a single mass release.

Balloons in a mass-release stick together, traveling the same wind currents. That means they also deflate (helium denatures) at about the same rate, hitting the ocean at about the same time, thusly washing ashore in unison, especially with the onshore winds we had for a few days. 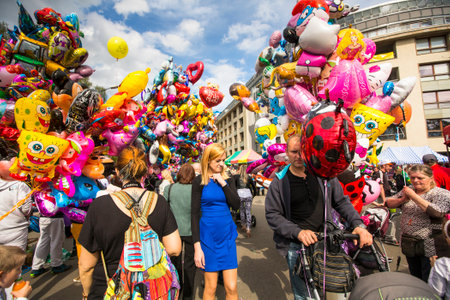 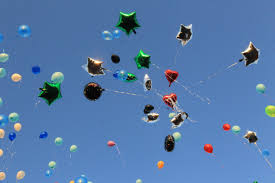 I have this infantile notion that there might be a way to follow these suckers back to their culpable releasers(s), maybe level some littering charges … times the number of recovered balloons. Short of some balloons that have the name of organizations and businesses on them, there’s very little chance of forensically backtracking balloons to their release point … and fining those folks behind the release.

Here’s an appeal to surfcasters tapping into the amazing weather: grab any nearby balloons on the beach – and odds are there are one or two – and place them in the trash. If you happen to find one with a business card attached, let me know. I can have some fun with that, so to speak.

BAD SPEAK: I have to let on about four separate folks – just today! – telling me how much fishing sucks, overall ... and over the past few years. The folks ranged from a born-on-LBI 70-year BH local to one of the guys over at Lowes. Same sad song for all.

Now, I’m a die-hard “It’ll get better” fan but I take it to heart when I hear this moaning – helped along by the fact that, not long ago, the Classic had already started by now and so many slammer blues would hit the scales, straight away, we had to change the rules to restrict how many could be weighed in per day. Almost all of you recall the days of which I speak. What’s more, the tourney almost always had large bass (over 32 inches) from the get-go. Something just might be wrong … big time. 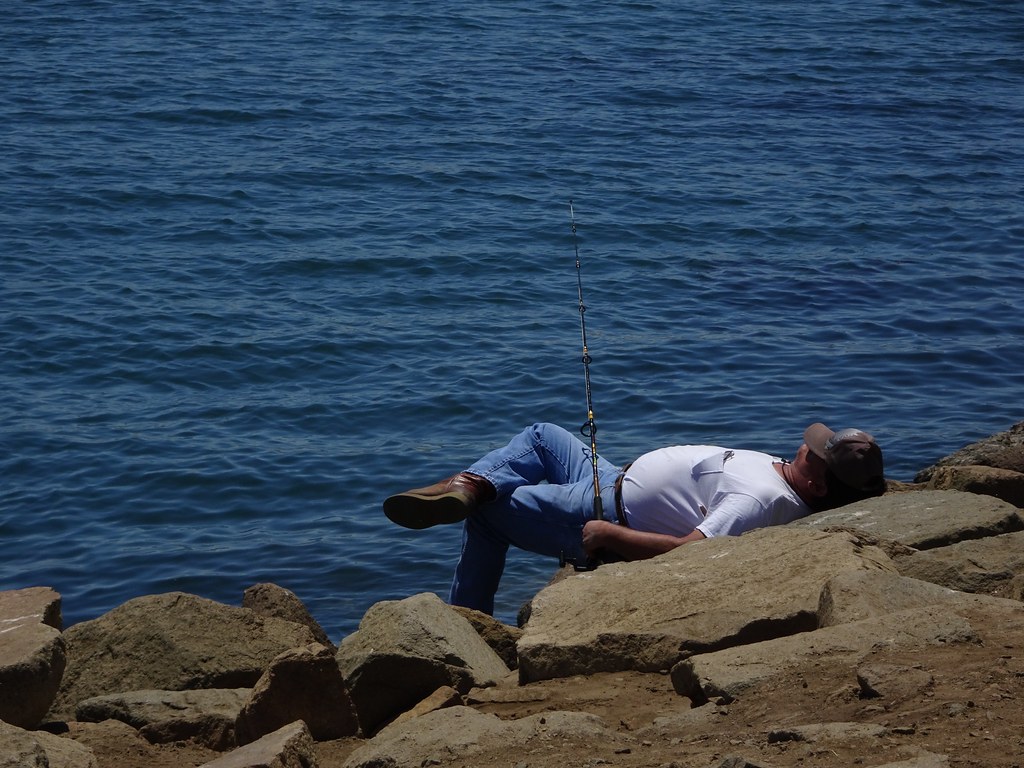 I’m admittedly an awful indicator when it comes to how surf fishing is going. Hell,  I once ran up to an insane beach blitz, joining dozens of folks throwing out Wildeye jigs and hooking into utterly nonstop mega bass and chopper blues. In nothing flat, with folks reeling in trophy fish all around me, I hooked up – and hauled in, firstly, one massive stargazers and, on the very next cast, an even bigger stargazer. I calmly put my rod away and began taking photos instead.

That recalled, I’ve lately been stopping at many a frontbeach spot to vigorously plug away. Absolutely nothing of value has gone after my assortment of plugs and jigs, short of some sub-small blues attacking the plastics on the later.

That troubling no-fish issue offered, hope springs maternal, mothering me with kindly words like, “There, there, Jay. This will be the fall that surfcasting will get all better.”

Thanks, disembodied voice, whoever the hell you are.

And that’s all I need to rig up my brand new heavy-duty Penn surf rod and equally brand-new spinning reel, via custom reel-maker Spyron Alexakis.

This fall season I’ll be trying something I haven’t done in a dog’s age: chunk-bait fishing. I’ll be going with mega chunks of bunker on a circle hook, using a very short fish-finder rig, with just a light pyramid sinker – or no weight at all, if conditions allow; just using the weight of the chunk to cast out. Hey, I feel more optimistic just thinking about this … but I’m still not doing any of those stinkin’ all-nighters. You gotta love coffee to pull those off. I don’t touch the stuff.

Join us all month long as we celebrate the bounty of sustainable seafood! From finfish to shellfish, Americans love seafood—and it's easy to see why. This healthy food choice provides key nutrients and proteins for children and adults. The seafood caught and farmed in the United States comes from some of the most sustainably managed fisheries in the world.

A Global Leader in Sustainability

The United States is recognized as a global leader in sustainable seafood thanks to a rigorous science-based fisheries management process. This process is enforced under ten national standards of sustainability through the Magnuson-Stevens Fishery Conservation and Management Act—exceeding the international standards for ecolabeling of seafood.

NOAA Fisheries tracks 474 fish stocks managed under 46 fishery management plans. We have rebuilt 43 stocks since 2000 as a result of our fishery management process. Overfishing and overfished numbers remained near all-time lows in 2016. To learn more about seafood, check out FishWatch.gov—the nation's database on sustainable seafood—providing science-based facts on more than 100 marine species.

Governor Chris Christie and Department of Environmental Protection Commissioner Bob Martin today visited Ocean County's Cattus Island Park in Toms River to announce a comprehensive action plan for Barnegat Bay and that the state will provide $20 million to ensure the continued recovery of the Bay. A key part of the action plan is the development of a total maximum daily load (TMDL) standard to reduce the nutrients going into the impaired areas in the northern section of the Bay.

"From the very beginning of my administration I have made it a priority to do what no other administration ever attempted - to implement a cohesive strategy to protect an ecological treasure that is so important for area residents, visitors and the entire state," Governor Christie said. "This $20 million will fund projects to improve water quality, protect natural resources and restore ecological balance to Barnegat Bay."

"We have laid a strong foundation with extensive scientific research and implementation of efforts to restore and protect natural resources," Commissioner Martin said. "It is vital that this work continues for years to come, as envisioned by the Governor's comprehensive action plan. This funding will largely go directly to local governments and nonprofit organizations that will continue to do the work of restoring Barnegat Bay."

The success of the plan so far is due to the partnerships that have been forged over the years and the immense sense of pride and ownership in the bay's future that this effort has built among countless thousands of people across its 660-square-mile watershed.

"The U.S. Environmental Protection Agency is proud to be part of the many collaborative efforts to restore Barnegat Bay," said EPA Region 2 Acting Administrator Catherine McCabe. "In addition to supporting New Jersey's work, EPA awarded more than $700,000 of National Estuary Program funds this year to assist in improving water quality by reducing sources of nutrients, contaminants, and other debris; restoring shellfish populations; protecting and restoring valuable eelgrass and wetland habitats; and many other efforts to improve the Barnegat Bay watershed."

The Governor and Commissioner Martin released the state's "Barnegat Bay Restoration, Enhancement and Protection Strategy: Moving Science into Action" report, developed with extensive stakeholder input to provide the framework for continuing to move forward with the Governor's Barnegat Bay comprehensive action plan, launched in December 2010. To review the new report, go to: www.nj.gov/dep/barnegatbay/docs/BarnBay-REPS.pdf

Barnegat Bay is 42 miles long and is very narrow, ranging from 1.2 miles to 3.7 miles wide. The brackish estuary is also shallow, four to five feet deep in most places. Because it only has two natural outlets to the ocean, its water flushes slowly. These features make the bay vulnerable to impacts from nutrients such as fertilizers in stormwater, algae growth, and ecological damage from boats.

Among its key findings, the Moving Science into Action report concludes that while the northern third of the bay is ecologically impaired, and others are showing signs of stress, many parts of the bay and its resources are healthy.

Specifically, the report notes that the overall health of macroinvertebrates in sediments is good but that the bay continues to show signs of stress from algae blooms, which degrade water quality and reduce dissolved oxygen that fish and other aquatic life need. The highest amounts of the algae-causing nutrient nitrogen, for example, are in the highly developed northern part of the bay, where water flow is also very restricted.

The report adds that damage from boat propellers to underwater ecosystems, such as eelgrass beds, lasts much longer than previously thought, while noting that the problem of stinging sea nettles can be managed through implementation of practices to limit attachment of polyps to structures such as docks and bulkheads.

The DEP's implementation of the 2010 action plan has included spearheading scientific research, conducting extensive water quality monitoring, preserving land, and assisting local governments in reducing impacts from stormwater. Key achievements include:
. Implementing a comprehensive public education program that has included watershed-wide Barnegat Bay Blitz cleanups that resulted in the removal of thousands of cubic yards of litter and debris by tens of thousands of volunteers;
. Providing tens of millions of dollars to finance local stormwater infrastructure-improvement projects;
. Amassing one of the most comprehensive bodies of scientific work on any estuary in the nation through 10 studies, including research on nutrient impacts, the response of fish and crabs to human impacts, sea nettle distribution, the importance of wetlands, and utilizing the health of bottom-dwelling life (such as insects, worms and clams) to assess nutrient impairments;
. Implementing one of the nation's toughest laws regulating the formulation and application of fertilizers;
. Establishing a comprehensive water monitoring network for both fresh- and marine-water quality;
. Preserving through the DEP's Green Acres Program more than 3,800 acres of open space in the watershed since the beginning of the administration, plus more than 7,800 acres preserved by the Ocean County Natural Lands Trust and its partners since 2011;
. Implementing a comprehensive public education program to raise awareness about the importance of the health of Barnegat Bay;
. Conducting green-boater compliance sweeps to heighten awareness of protecting ecologically sensitive shorelines and underwater ecosystems from propeller and wake damage; and
. Securing a commitment by Exelon Energy Corp. to shut down the Oyster Creek nuclear power plant by the end of 2019.

The press release posted by the Governor's Office can be found at www.nj.gov/governor/news/news/552017/approved/20171004a.html