Wednesday, November 02, 2016: Ditto. That’s the easiest way to say we have another mimeographed day ...

Retraining primitive tribesmen for life in modern society had its drawbacks:

After watching soccer all weekend, Pretty Boy Mauler got into the ring and ...

Jim Hutchinson Sr. report: The fall bite that the boats of the Beach Haven Charter Fishing Association has been waiting for has arrived. The striped bass are here in many sizes, and these fish are hungry.

The body of fish which had been massed to the north of Ocean County has begun to make its way to the south into the welcoming arms of the BHCFA captains. While the best bite is still a short ride north of Barnegat Inlet, more and more fish are showing up right off the shores of Long Beach Island.

An indication of the number of fish around is the final count from the recent Sea Shell Striped Bass Derby in Beach Haven. A total of 93 boats weighed in 94 fish with 58 of these coming on Sunday morning.

Prior to the last couple of days, the bite had been mostly restricted to boats trolling bunker spoons and Mojo’s. Now there are pods of bunker close to the beach, and there are bass under them. This has made it exciting for “snag and drop” fishing in water depths of 20-60 feet. At times the bass are right on top of the water making for fun on plugs and poppers.

Besides the bass action there are whales and dolphins around also feeding their faces on the bunker. Captain Gary Dugan of the “Irish Jig” recently ran up to just south of Barnegat Inlet and found “massive pods” of bait with some whales putting on a show. Captain Gary said he took a beautiful 44-inch striper home for dinner.

Email from just north: Alex Lynn "dont know who you have been talking to but over 50 stripers caught from the beach at seaside heights on plugs sun and mon  35-42 in!"

Wednesday, November 02, 2016: Ditto. That’s the easiest way to say we have another mimeographed day. Hey, who remembers ye olde mimeograph machine. In school we’d get the copies hot of the machine and sniff the ink like a buncha addicts … following the long inhale with an equally long “Ahhhhhh.” Thinking back on those days, life was actually kinda weird. 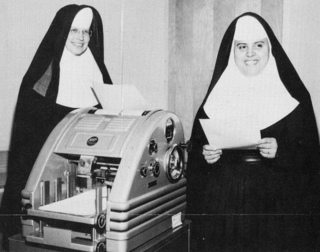 Not so weird is the ongoing utter domination of boat bassing over beach bassing. This is tears on end for this trend – which I’ve said all along has to do with a massive increase in bunker schools hanging off the beach. Even when the bunker aren’t balled up, the bass hang out there waiting. 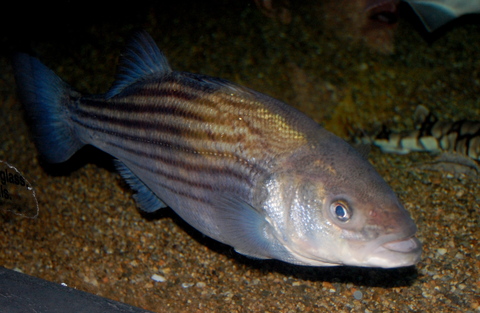 Anglers seldom recognize how long fish, like bass, will just hang, nearly motionless, near the bottom. I’m talking hours on end, especially when knowingly waiting for a ball of swimming food to arrive.

When diving, I’ve seen bass hugging the bottom near jetties, so much so that I’d see a couple hunkered down on the lee side of one jetty, swim all the way down to the next jetty, come back, and those bass hadn’t moved an inch. In the case of beach bass, they often feed at night or have loaded up on crabs to where they can’t eat another bite.

I’ve seen other cases of bass locked in place when night fishing the Hochstrasser bridge, under its light. Sometimes half a dozen stripers would idly hang in the shadows of the bridge – for hours on end! Many other bridge anglers saw this weird phenomenon – weird because there was nothing you could do to get those bass to bite. In the past, I’ve written about the identical near-comatose resting behavior with fluke.

Note: As recently as last week, I was told there will be fishing off the north side of the renovated Hochstrasser bridge. I can assure that there can be exceptional fishing there, though getting a larger fish topside could lead to the use of bridge/pier nets. 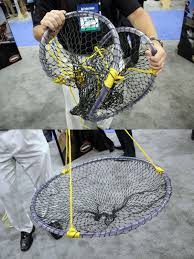 Getting up for night fishing ...

As to today’s ocean, it not only looks sweet for surfcasting but the south winds aren’t hard enough (midday) to ruin boat bassing. Below you’ll see some boat takes. Tides are low, late-day, though not blowout. 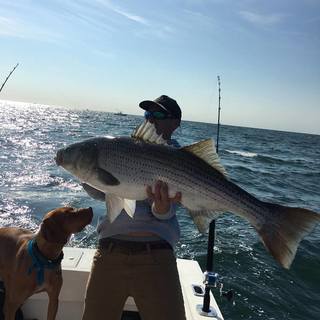 The huge ruts made by dredge pipes being hauled from HC to Holgate have been nicely filled in. I have to admit that Great Lakes Dredging is a very professional group, for many reasons, not just because they quickly filled in those ruts like they said they would.

If you missed this yesterday. https://www.youtube.com/watch?v=y2V0OiBHjEw&feature=youtu.be

Nine bass and one blue have been entered into the 2106 LBI Surf Fishing Classic. Don't tell me you don't sign up because you're outclassed by sharpies. Get the hell signed up so you not only win money and prizes ... but show the world who the real sharpie is ... you! 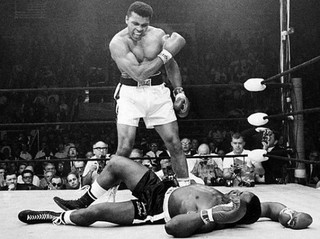 Have an experienced angler coming down for the next couple weekends, looking to boat fish/mate this weekend. Anyone need company or a deckhand? Contact me at jmann99@hotmail.com or private message me on Facebook.

Message: Jay, I'll be down the next two weekends, do you know of any Fishermen that could take an extra guy out? I'd pay my way, clean fish and boat! Thanks in advance

Below: When word gets out about a hot surfing spot ... 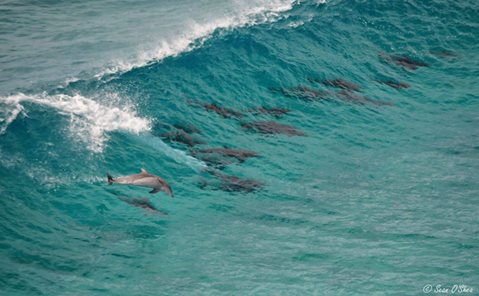 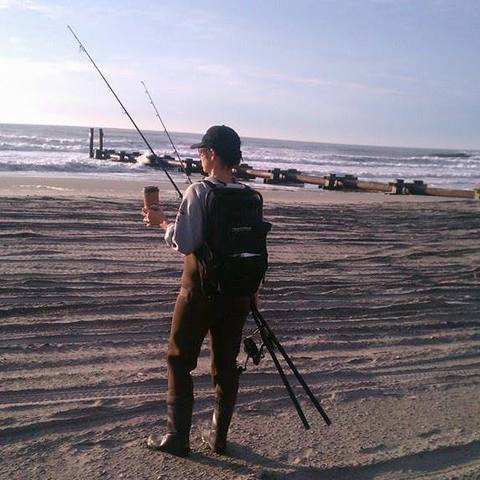 Day three of fish trap charters. Come get your stripers there's an happen Little different today!!!! Hundreds of boats all over and the fish scattered! After starting 0-1 with more and more boats coming, we decided to push way up north and came across a large pod without another boat around. Started off with a triple and slammed them from there on out! Epic fishing, these are the trips that we'll never forget. 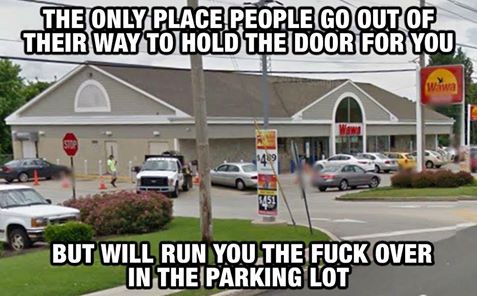