Wednesday, March 07, 2018: A subtle wind shift from the NE to NNW removes some of the ocean-effect warmth, meaning the white stuff will be moving quite close to the coast

Wednesday, March 07, 2018: A subtle wind shift from the NE to NNW removes some of the ocean-effect warmth, meaning the white stuff will be moving quite close to the coast. While the white’s main target remains west of I-95, more areas of Jersey could see three inches and (way) up. We might now see anywhere from an Island coating to sweepable amounts. Should a wave or two of precip swing down the coastline as the storm moves out, it could get slick … and thick.

The shift to side-ass winds might help reduce any road flooding later today. It still won’t be the best afternoon to hightail down the Boulevard at 45. Also, a couple inches of rain will add its own flair to flooding, though it could knock the salt content of the flood waters down a bit.

The entire online March 7, 2018 issue can be found at:  https://thesandpaper.villagesoup.com.

Take a quick look-see at the flood-driving piece:

If you can’t avoid driving through flood waters, then do it slowly. That’s the message local officials and law enforcement want residents, contractors, seasonal homeowners and visitors to take away in the wake of the recent nor’easter that saw an uptick of motorists speeding along Long Beach Boulevard during some of the highest floods.

“When going through high waters, the best thing to do is not,” Ship Bottom Police Sgt. Michael Nash said. “If you have absolutely no choice, go very, very slow. Driving fast only increases the likelihood of the vehicle sucking the water up into the engine.”

Taking water into the engine will destroy a car, he said. Borough police responded to a number of calls from motorists whose vehicles washed out during last week’s storm and who needed to be picked up, Nash said.

“Everyone is sensitive to it,” he said. In the recent past, residents have publicly complained to borough officials of wake waters flooding their homes on the side streets, particularly between the Boulevard and Central Avenue, where some of the worst flooding in the borough exists.

In neighboring Long Beach Township, Mayor Joseph Mancini said he has instructed local law enforcement to step up enforcement on motorists speeding through the flood waters.

“You are responsible for your own wake. ... And have some compassion for those who own homes and businesses on the side of the road,” who would prefer not to have waves of water sent toward and into their structures by vehicles moving fast through flooded areas, he said earlier this week.

More deaths occur due to flooding than from any other thunderstorm-related hazard, according to the National Weather Service. The Centers for Disease Control and Prevention advises motorists to avoid driving through flood waters because drownings can result, and it can happen quickly.

“It takes only 6 inches of water to move a vehicle,” said Valerie Meola, a meteorologist with the National Weather Service. “Cars are kind of buoyant because of the tires.”

From my editor's desk, I can't even estimate the number of "wake" complaints I've gotten over the years from business, homeowners and motorists. It's a genuine flood-time hazard.

While vehicles of virtually any and every size have been singled out for going through flood waters so fast they drench other vehicles and send wake waves into storefronts, I think trucks and SUVs are the main culprits -- with smaller Wrangler-type Jeeps and jacked-up trucks among the most aggressively attituded. The police have also singled out work/contract vehicles as problematic wake-makers, though I really don't see that as much. In fact, you'd think the detailing on the sides of their vehicles, broadcasting company names, would keep them a slow-go.

I'm not sure why but at the height of flooding, there's often an anything-goes bit of thinking, especially when trying to get through deeper waters. Most anything-goers know they can be ticketed for wake-making but assume a form of "Damn the torpedoes (tickets), full speed ahead."

Motorists impacted by opposite-way drivers goings balls out, often suffer a complete engine wet-down -- a salt-laden drenching. Over the weekend, I saw a wake go clear over the hoods of a couple swamped sedans. I know: They shouldn't have been out there anyway. Well, they were. 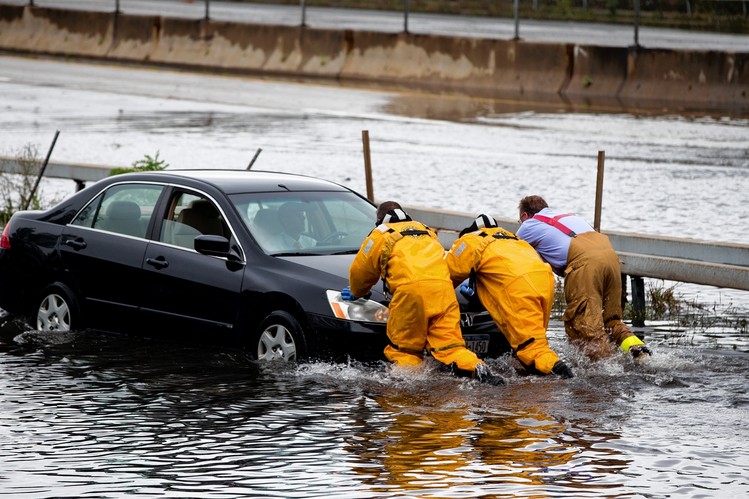 Gospel truth: I had a gal once call me about a Boulevard flood incident where she saw a "raised-up truck" speeding through the water, "spraying water up like a speedboat." Ready for this? So, she rolls down her SUV window to scream at him as he passed. How can you not laugh a little bit? And there's more. She was so furious -- and soaked to the skin -- she tried to pull a U-turn ... and hopelessly stalled out. I'm pretty sure she filed a police report, though I never saw it. Maybe she rethought it.

Far less laughable is the recorded damage done to stores in flood-prone areas. They offer tales of successfully staving off rising waters ... until wake-making drivers caused overwash into the shops. That sucks.

Below: Hey, if things have progressed to calling in the National Guard trucks, no-wake thinking is kinda out the window.

I'll be the first to admit there really isn't much that can be done after being drenched by a wake-making speeder, short of taking down plate info and then filing a personal complaint. If going that route, it sure does't hurt to have dashcams, both front- and rear-facing.

To be sure, the police do everything they can to protect motorists during flood events, but they're often up to their necks directing traffic, responding to flood-related calls ... and even assisting in rescues.

As to simply not driving about when waters rise, it's a worthy concept but not always as easy to maintain as it might sound. Life demands, not the least of which is the fear of what flooding might be doing to personal property -- or how good the surfing might be -- all too often override riding things out at home. Besides, dealing with flooded roads has long been a way of life hereabouts. It comes down to making an educated LBI call on when things have gotten too deep ... which is "never" when trying to get to Wooden Jetty to surf. 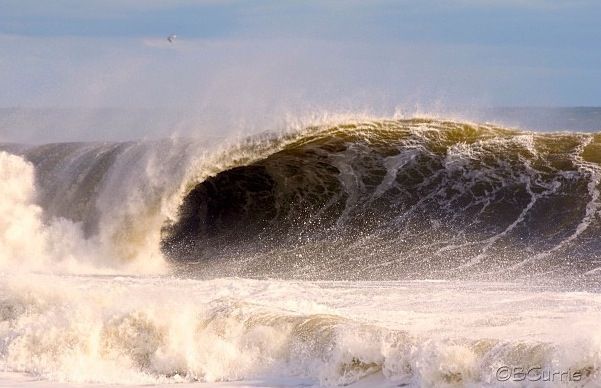 How to never hold a live fish with a plug still in its mouth ...