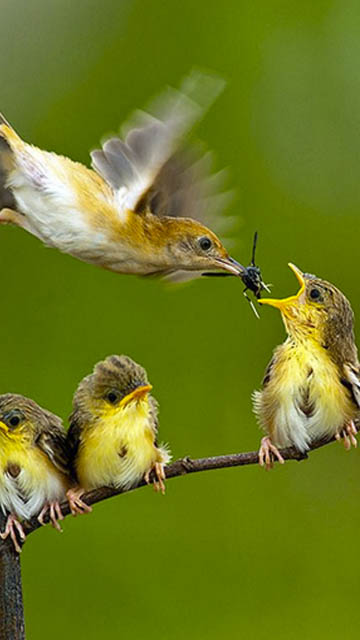 Wednesday, February 17, 2016: Did a load of woods time today and was lovin’ the ideal 45-degree temps. Yes, that’s ideal for me since I often dig like banshee. I guess banshees dig kinda wild-like. I found some cool smaller things, including a couple vintage fruit jars and a fine Berlin Soda bottle.

Much of the time I was digging, assorted fighter/attack aircraft were using the Warren Grove Gunnery Range … like banshees. As I noted on FB, “Spooky amount of jet activity all day and tonight at the gunnery range, Warren Grove. I say spooky because you always have to worry about world affairs when activity there picks up.

I assume the flights we're hearing are all manned, though the government won't be saying if the aircraft are part of the nation's new unmanned aircraft system (UAS). There's no telling just by listening.”

In the past, I saw the escalation toward the Iraq attacks, plain as day, by flight activity at Warren Grove. 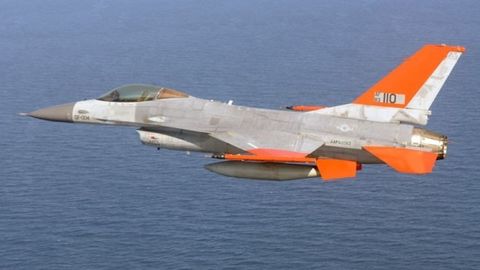 I fully understand that those flights at Warren grove are often the Air National Guard (ANG). However, the days of ANG being just weekend warriors are way over. ANG literally protects the nation when other military aircraft are deployed overseas. And we now know, all too well, the need for fast-response military aircraft right here in our own backyard. As I said, it’s all kinda spooky. 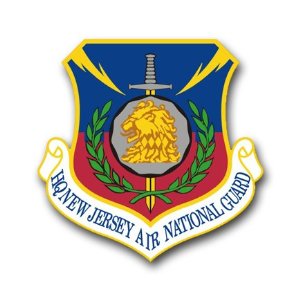 I did an a.m. Holgate run and ran into a troubling amount of loosed and free-wheeling sedge sod.

I guess I should be more technical about the mats and clumps of stuff down there. In that vein, I’ll call it, now and again, compressed vegetative material (CVM). It is, in fact, the stuff of which sedges are based upon. The decayed matter becomes the base of sedge islands. More grassy vegetation can grow atop it – and deposit more layers of vegetative material. Eventually, the CVM becomes rich enough to support more complex vegetation, like shrubberies and trees, the makings of a maritime forest.

(A maritime forest is an ocean coastal wooded habitat found on higher ground than dune areas within range of salt spray. They can be found along the Atlantic and Pacific Northwest coasts of the United States.) 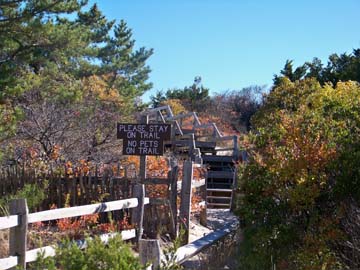 I’ll offer a little treasure note here. In Harvey Cedars, before replenishment, the sedges were exposed and excellent Lenape Indian finds were made. 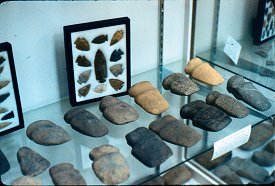 That second thing is the so-called politically correct, even archeological-sound, method of dating. I’ll explain.

As we all know, the meaning of BC is Before Christ and AD is Anno Domini or Year of our Lord, referring to the year of Christ's birth. The new BCE is identical to BC in actual years -- 400 BCE is the same as 400 BC – but it means "Before the Common Era." CE is meant to mean "Common Era." There is a meet-half-way interpretation, whereby BCE can mean Before Christian Era, while CE can mean Christian Era. Happy holidays, right?

As to those Native American artifacts, none from LBI are even remotely close to the Paleo Period 18,000 BC - 8000 BC. But don’t get me going on that again. A Paleo item found on LBI last year originated on the mainland … what part of the mainland is anyone’s guess.

I should add that once the full replenishment is in place it is doubtful any more Lenape artifacts will be found on LBI, except maybe BL.

Another canvas based on my OBE (out of body experiences) with primordial sea bottom ... Using Bob Popovics famed hollow tying method with our own CSF Synthetic Bucktail produces a fly that has the illusion of bulk but without the weight and of course being synthetic it will shed any water on the first back cast.

Environmental agencies must go much further in regulating aircraft emissions if they want to make a real difference.

Aviation has become a symbol of the world’s reluctance to make serious efforts to tackle climate change — perhaps unfairly, given its relatively slight (although growing) contribution to the global-warming problem. On an individual level, those who travel by air leave gigantic carbon footprints, governments continue to invest in runways and airports, and the industry remains focused on growth.

Most international frameworks to tackle carbon emissions struggle to include aviation. When the European Union tried to encompass emissions from international aviation in its emissions-trading scheme in 2012, it met with widespread protest from the industry and governments. Instead, the International Civil Aviation Organization (ICAO) — the United Nations body that oversees the skies — agreed to come up with its own measures.

The world saw the initial results of the ICAO’s work last week, when the organization proposed anew global carbon dioxide standard for aircraft. It was hardly an inspiring achievement. The proposed regulation, which is expected to be adopted later this year, is complex, but the gist is that all new aircraft would need to meet minimum fuel-efficiency standards by 2028. The ICAO says that the rule will guarantee reductions in CO2 emissions. This may be true, but it is misleading.

An independent assessment by the International Council on Clean Transportation (ICCT) suggests that new aircraft would emit on average 4% less CO2 when the measure takes full effect. However, each generation of new aircraft is already made to be more fuel efficient than the last, and the same independent assessment highlights that aircraft manufacturers are likely to achieve an efficiency improvement of more than 10% by the time the new standard kicks in, effectively rendering the rule redundant.

Still, the most notable thing about the global standard will be that it exists. It is both a precedent and a tool that could one day be used to push the industry further than it would go of its own accord.

Individual countries could yet adopt stricter regulations. Last year, the US Environmental Protection Agency (EPA) issued an ‘endangerment’ finding for aviation emissions, which represents the first step in a regulatory process under the country’s Clean Air Act. The EPA is expected to finalize its finding in the coming months, and then it could launch its own regulatory proposal. The agency could, and should, go well beyond the ICAO standard on new aircraft, and introduce rules for existing aeroplanes.

“Now is a good time to invest in a much cleaner future.”

The EPA will not be able to complete this process before President Barack Obama leaves office, so it will be up to whoever is elected president in November to follow through. Given the general opposition by US conservatives to any kind of action on climate change, there is little hope of getting a strong regulation from a Republican administration. Moreover, whatever the EPA proposes will surely be challenged in the courts, which can be fickle and unpredictable, as evidenced by the Supreme Court’s decision last week to block implementation of Obama’s power-plant regulations pending the outcome of a legal challenge. But one thing is clear: the EPA must act on flights, and environmentalists will surely take the agency to court if it does not.

Zero-emissions aircraft are not likely to be flying any time soon, so the key to the ICAO’s idea is the use of carbon offsets. It is probable that some kind of fee would be levied on international flights to pay for emissions reductions elsewhere. But there is scope to go further on cleaner aircraft too.

Airlines are currently reaping profits thanks to the collapse of the oil market, which has lowered fuel prices across the board. Despite opposition from the aviation industry to strong emissions rules, now is a good time for it to invest in a much cleaner future.