Wednesday, February 10, 2016:  I’m waiting for the insane cold almost as if it’s a storm coming. The meteoro-folks are now toying with the notion it will get down to 0 on Saturday night. What’s more, there will be wind. Where I had some hope for my outside shower – turned off, mind you – just the water fumes that hang inside will chew up the soldered points. Yes, I even blew out the pipes. It’s simply a case of too cold for the joints.

I checked with a plumber and he confirmed what I’ve often heard before: You have to allow your inside faucets – all of them -- to flow at about the thickness of (and here’s where some folks mis-hear) the lead inside a pencil. Simply put, there has to be a steady flow to relieve the pressure.

Important: You have to let both hot and cold run. Seventy percent or more of the pipes plumbers repair are the hot water pipes.

Yes, that seems like a lot of water over the dam but the damned cost of frozen pipe repairs makes a jacked up water bill seem like chump change. Here’s a rarer bit of advice to keep water pipes from going ice-up: Force yourself to climb outta bed in the middle of the night to flush the toilet(s).

If you wanna get highly preventive (and, knowing your handyman skills, I wouldn’t) it’s possible to toy with the back of the toilet to cause it to run, sans flushing. That tweak is for folks who have had a history of the john freezings. 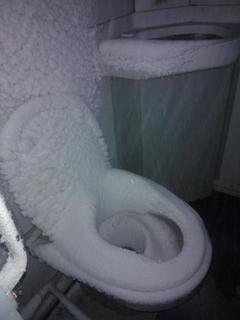 Don’t say you heard it here but this is the toilet-run technique:

In cold bathrooms, especially those above a garage, it's good to leave the toilet running to prevent pipes from freezing. 1. Cut a 3-foot piece of yarn. 2. Remove the toilet tank lid. 3. Put yarn in water. Flush the toilet while holding the yarn underneath the flapper. Do not allow the yarn to flush down the toilet. It could clog the jet and wash-down holes. 4. Drape the yarn over the tank's edge and hold it in place with the tank lid. 5. The running toilet keeps cold water moving through pipes. 6. Remove string when danger of freezing passes.

If you have a newer type toilet flush mechanism, check this out … an ideal use of sinkers … 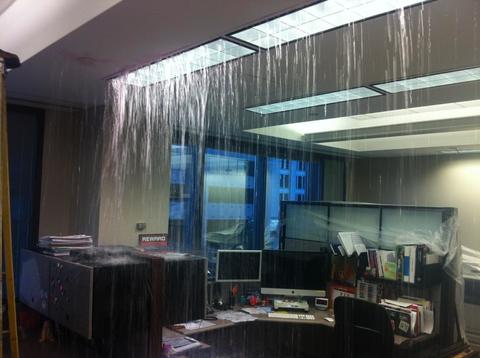 All I have for protection is this little ole pistol ... This cold weather has me all nostalgic for the old days. I ripped this out to consider joining the Kosseff team. I instead surfed for with Ron-Jon and then Rick's Surf Shop. 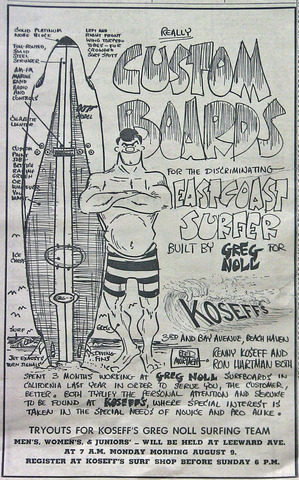 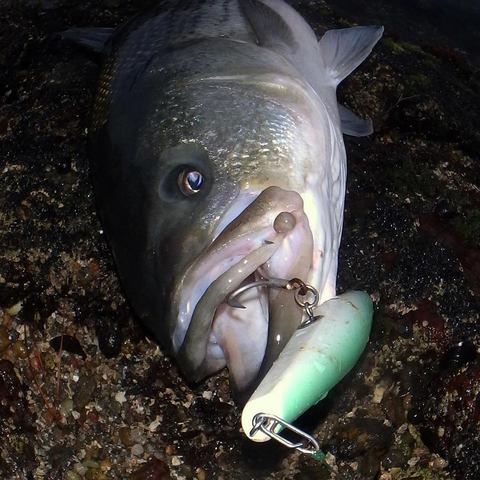 Now if I can only remember this ...

Another Study says to Reduce the Risk of Alzheimer's, Eat Fish, Not Oil Capsules


Eating seafood is linked to a reduced risk of dementia-associated brain changes in people who carry the ApoE4 gene variation, which increases the risk for Alzheimer’s disease. Eating seafood was not linked to similar changes in those who carried other forms of the ApoE gene.


The study, published in JAMA, looked at 286 autopsied brains and also found that eating seafood was linked to increased mercury in the brain, but that mercury levels were not linked to brain abnormalities.


After controlling for age, sex, education and other factors, the researchers found that compared with those who ate less seafood, ApoE4 carriers who had one seafood meal or more a week had lower densities of the amyloid plaques and neurofibrillary tangles typical of Alzheimer’s disease. Over all, they had a 47 percent lower likelihood of having a post-mortem diagnosis of Alzheimer’s.


Consumption of fish oil supplements was not correlated with pathological brain changes.


The lead author, Martha Clare Morris, a professor of epidemiology at Rush University, said that mercury from fish appears to pose little risk for aging people. But, she said, there are studies that show that mercury consumption in pregnancy can cause cognitive problems in babies.


“Most studies in dementia have found that one seafood meal a week is beneficial,” she said, though “they haven’t found that the more you eat, the lower the risk.” 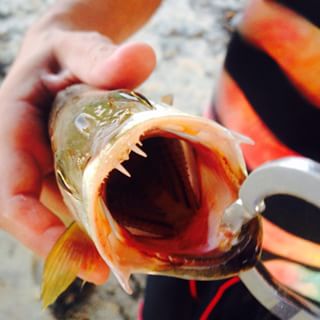 Weakfish are dying off. Their collapse, when graphed, is off the bottom of the charts, despite Draconian conservation measures – for years now.

I’d like to herein offer a pure possibility – while dreading the kickback from those who will hysterically disagree, even if silently agreeing I might have point.

If you said just about every predatory fish – with some marine mammals thrown in for good measure -- you’d be right. For being a gamefish, weakies are astoundingly low on the fish-eats-fish totem, so I’ll point out the just most obvious devourers of weakies.

First and foremost on the kill-weakfish list are striped bass. They engorge themselves on spike weakfish. They’re terrorized at every turn by attacking bass, including sub schoolie-sized stripers. 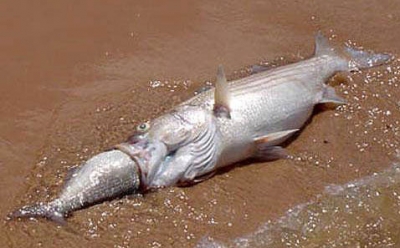 Of course, I wouldn’t dare suggest to bass lovers that we should diminish the bass biomass, starting from mid-size models. Just recognize that when you baby one species, you’ll be sacrificing another. It’s Biology 101.

Truth be told, many a basser might see such a sacrifice as perfectly justifiable in this bass-or-weakfish instance. All I ask is those folks admit to the sacrificial arrangement instead of coyly pretending the possibility couldn’t possibly exist.

But I have yet another angling group to offend in the great weakfish disappearance. 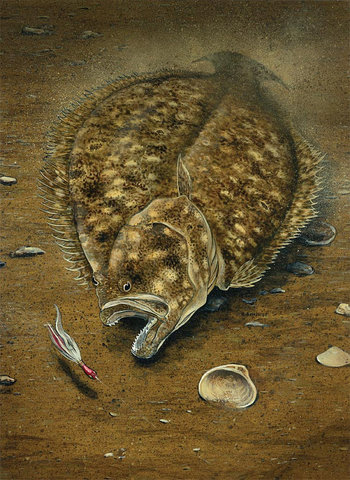 The double-barrel babying of fluke is like shooting weakfish stocks with a double-barrel shotgun. For ferocity, fluke can go one-on-one with bluefish. They’ll grab just about anything within eyeshot. Young-of-year weakfish haven’t got a prayer of sneaking out to sea through inlets literally layered with likely millions of under 16-inch fluke. So-called sustainable levels of fluke are easily enough to kill not just every weakfish in sight but also every y-o-y tog and black seabass. But fluke are just about every NJ angler’s baby.

Yes, it’s always easy -- and highly convenient -- to single out bluefish as the mass manglers of weakfish stocks. The immediate problem there is how the bluefish population has significantly diminished over the past decade with absolutely no accompanying uptick in weakfish. Still, there’s no denying that blues are yet  another biter in the lineup of weakies eaters. As to mankind, we might very well be among the early reasons weakfish got so low in numbers; to the point where natural predation began outpacing recruitment. But we’ve backed off, though not of our own accord. Right up until the current collapse, many anglers could be heard using the don’t-give-a-shit chant, “There are more weakfish out there than ever. We don’t need no stinkin’ bag limit.”

But I guess I should end with a cop-out that satisfies most anglers, while dooming weakfish. Let’s all blame the bay ecology, which is now so over-nutrified and chemically altered that weakfish can’t survive after spawning. Hell, I’m always willing to run with such a soundly environmental possibility. However, how do other bay-born species, like fluke, use the same waters and are seemingly not suffering any catastrophic ill-effects?

Damn, now I have the Barnegat Bay huggers pissed at me for implying the bay isn’t in a state of ecological disrepair. Sorry, weakies, there’s no winning. 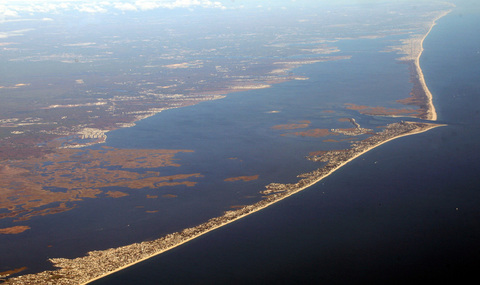 
This afternoon, the Assembly Environment and Solid Waste Committee is expected consider legislation (A-2404) that would direct the state Department of Environmental Protection to conduct a study of the bay, and if it determines it is impaired, to develop a so-called pollution diet to limit runoff into its waters.

The bill is identical to a measure already approved by the Senate Environment and Energy Committee and similar to another bill previously conditionally vetoed by Gov. Chris Christie and eventually died five years ago.

Barnegat Bay, a widely recognized jewel of the Jersey Shore and a critical cog in the state’s multibillion dollar tourism industry along the coast, has longstanding problems jeopardizing its viability.

Most of those problems have been well documented. The bay has been overloaded with nutrients, primarily nitrogen and phosphorous. That leads to eutrophication, which results in rapid algae blooms that upset the bay’s delicate ecological balance.

The process causes a sharp decline in eel grass, an important habitat for marine life, steep drops in clam populations, and an increase in sea nettles, a type of jellyfish, that has made impossible to wade or swim in some parts of the shallow bay.

In recent years, a by the Rutgers Institute of Marine and Coastal Sciences suggested those problems are worsening. The study, disputed by the DEP, said the bay’s condition is declining, blaming it on overdevelopment along the coast, which leads to runoff polluting its waters.

Sen. Bob Smith (D-Middlesex), who is a sponsor of the Senate version, said it is now time to act when the bill came up for a vote in his committee.

Sen. Kip Bateman (R-Somerset) agreed. “Barnegat Bay is dying. We should have acted years ago,’’ he said.

The DEP, as has been its custom in the past few years, did not appear at the Senate committee, but sent a letter to the panel saying it is still evaluating the science of the issues affecting the bay, which will allow the agency to identify the type of nutrient loading going into its waters.

Environmentalists generally backed the bill, saying the failure to try and control runoff into the bay is a universally recognized problem that needs to be addressed. But the Pinelands Preservation Alliance said there is enough science to warrant action now, suggesting that the requirement in the bill mandating another study be eliminated.

“Everyone knows the biggest problem with Barnegat Bay is overdevelopment,’’ said David Pringle, campaign director of Clean Ocean Action. “It’s really the only way we are going to fix the bay.’’

The committee unanimously voted out the bill with one amendment, which requires the DEP to develop nutrient standards for marine waters in the state, not only Barnegat Bay.

The dozens of bug species that live in your home, in one chart

For as long as we've been around, humans have lived with insects. From the earliest cave dwellings to modern-day McMansions, it's been impossible to find a human dwelling that's insect-free. But surprisingly little is known about the bugs thriving in the cracks and crannies of our homes.


So recently, entomologists completed what they say is the first census of the arthropod (a classification that includes insects and spiders) species that live in the typical American home. Assessing 50 houses in the vicinity of Raleigh, North Carolina, they found a stunning diversity of critters.

Here's a graphic summarizing all the types of arthropods they found in the average home. Say hello. These are your true neighbors.

On average, each house hosted 62 different arthropod families, for an average of 93 different species per home. Some homes had as many as 211 species. The authors stress that this is likely a conservatively low estimate, since they only assessed the room in each house that hosted the greatest number of species.

And, yes, every home contained arthropods. Of the 50 houses researchers studied, they found only five rooms that seemed to be bug-free. The paper was published in the journal PeerJ.

Most of the insects in our homes aren't pests

Of the 93 species found, surprisingly few of them were what we'd typically consider pests: cockroaches, fleas, bedbugs, termites, etc. "In fact," the authors write, "we found a relative dearth of typical household pests."


Which is to say, the vast majority of insects and spiders that live in our homes don't bother us. They may have even evolved alongside us, creating whole, nearly invisible, worlds. And we have yet to fully understand the benefits (insects may clean up our debris, like skin cells and nail clippings) or the downsides (they also may carry disease).

"Biodiversity in urban landscapes is richer than was once thought," the authors write in conclusion, "and we find here that the indoor, manufactured environment also supports more diversity than anticipated." 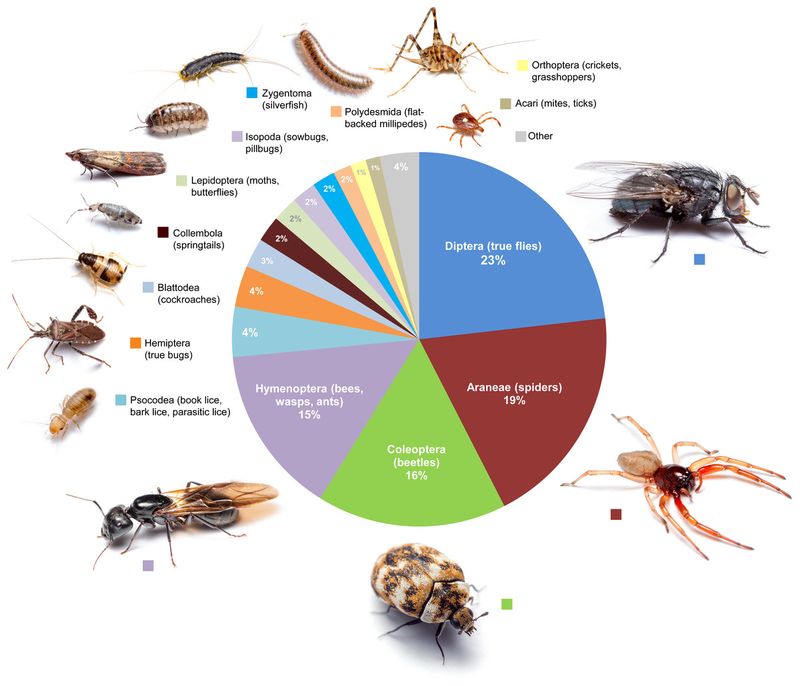 42' Calvin Beal #3 getting ready to head to the finisher! She looks awesome!!