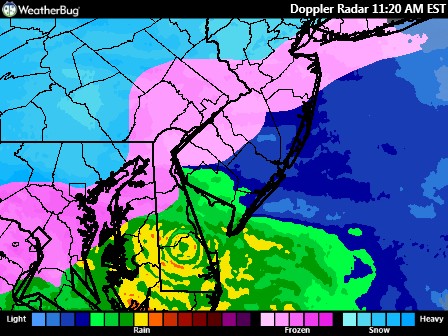 (Above: Midday today. A perfect example of that I-95 rain/snow line.)

I get a spurt of time off and the skies decide to become seriously unsavory.

I had mentioned last week that this week would be all over the weather board, and, sure enough, we’re about to be checkerboarded with a nice day, hellacious storminess, pretty day, hideous tempest, decent day, sleet day – right into next week’s dip into coldness.

I had also written about the tendency for warm front to skirt up the coast – literally along the I-95 corridor – knocking down the potential for snow event long the shore. Check this a.m. weather map and you can see the warm front now forming, heading our way rapidly. I’ll reiterate that the coldness – which really isn’t going to be much more than lows in the mid-20s – is essential to cleaning up our bay, still carrying a chemical load dropped by Sandy -- and later carried bayward via street flooding, as recently as last weekend. We’ll, be seeing some more flooding by tomorrow – though I’m not getting the anticipated two to three inch being forecast by some computers. Don’t be surprised to hear thunder – and some air temps in the 50s -- as the arriving storm gets pushed seaward by colder air.

Chatted with an LBI summerite who was here for Sandy then went to his government job near Mobile, Ala., and was in that tornado maelstrom yesterday. We both couldn’t resist nervously laughing when he mentioned he soon has to do two weeks of training in Oklahoma City – to me one of the most, lets’ say, vulnerable urban areas in the country, if not the world. 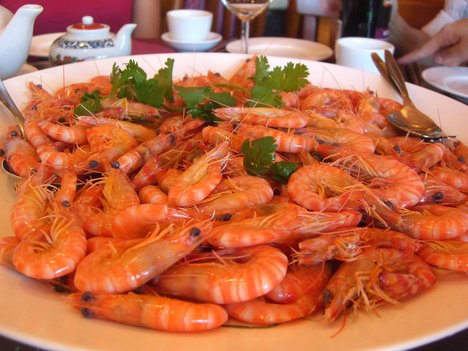 I read a Facebook entry from a fellow (former SandPaper writer) who was worried about some shrimp he feared had been thawed too quickly. Having worked with more shrimp than I ever want to see again while in Dallas, I can tell you that I’ve seen shrimp thawed every whichaway, and it’s all good --- providing the shrimp was good to begin with. And you’ll know instantly if it wasn’t. Shrimp is yet another seafood that speaks to you – nose first -- when past peak.

Even if that refrigerated shrimp is no longer a spring chicken –or has frostbite atop freezer burn – it cleans up real nice and edible when boiled one good.

Despite some secondhand reports to the contrary, bassing was anything but hoppin’ over the holiday. 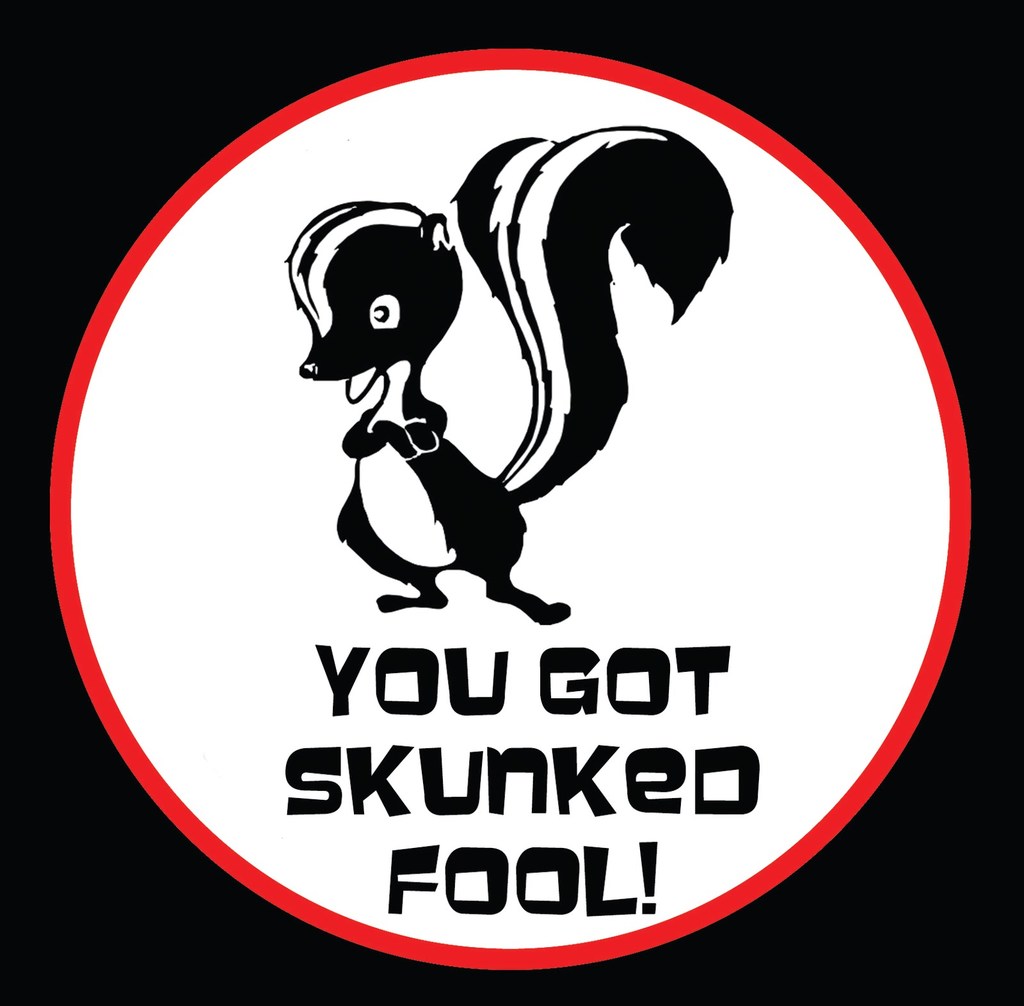 (Below: You might recognize the arapaima from the River Monsters TV series.) 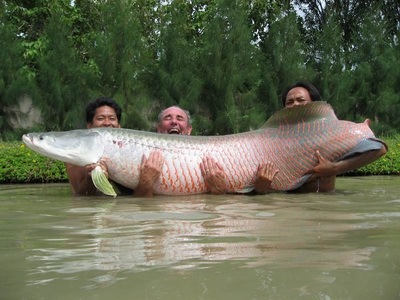 The scales come from a huge fish from Brazil called the arapaima. Known as the ancient river monster, it's one of the world's largest fresh water fish and can grow to 10 feet and top 400 pounds. It's also one of the few air breathing fish in existence. Each of its scales is coated with a rock-hard mineral material, with soft cores made from strings of stretchy protein. Researchers believe the scales could be used to make better body armor for soldiers or sturdier prostheses.

Find a report on the fish scales in the journal Advanced Biomaterials.

Also, pollock skins are a new source for nanofibers that have a similar tissue structure to human organs and skin. Bor-Sen Chiou is lead researcher at the USDA lab in Albany, Calif.

"Hopefully, if you have a damaged organ you can grow these cells outside the body and be introduced into the wound and help improve the ability of the organs to heal itself."

Antibiotics can be added into the tissue regenerating fibers and used for wound dressings. And studies show that fish gelatin improves cell growth better than mammalian gels.

Fish Radio is also brought to you by Ocean Beauty Seafoods - serving Alaska's fishing communities since 1910. On the web atwww.oceanbeauty.com .. In Kodiak.