It's better than spiders ...

Wednesday, December 02, 2015: Looks like me might just have to make this a do-other-things day. Thick and drippy out there. No boating potential with fog horns sounding.

There is some surf fishing to be had but the beach is going to go from a heavy fog – that’ll soak you as fast as a rain – and eventually end with afternoon downpours.

Then comes the winds. In this case, it’ll be good to blow away all this thick, foggy air. The problem will come with the west wind speeds, gusting over 30 mph. This go around, I agree with forecasts that the winds will thoroughly honk beginning tomorrow. The upside is the short stay scheduled for the hardest winds. It’ll only hang SCA hard for a day or so.

The bass are still in the hood, though mores so just to our north. A couple LBI regulars were recently in IBSP for what must have been insane bass blitzes. I saw some pics that showed a bass blitz so wild it looked more like a bluefish blitz. folks said they’ve never seen a better striper explosion in the surf.

With that fresh in-mind, we have to return to the surfcasting reality of LBI, namely, what they see just across Barnegat Inlet is rarely-if-never what we’ll soon see here. The weird wall twixt here and there seldom falls. Neither do my optimistic efforts to telepathically coax the IBSP fish frenzies this way.

And this time my telepathy might work. The power west winds about to arrive will smooth down the surf, very quickly. This time of year, blitzes lend themselves to offshore wind conditions, which allow schooled bass to choral baitfish flush to the shore.  I guess that means we need some baitfish hereabouts. Let’s hope.

The smooth-down of the seas also allows bunker balls to reorganize off the beach, out in the boat-bassing zone. I’m betting the west wind will die enough by late Friday to where some vessels can get out to track the bass biomass. Saturday should shine … beach and boat. If you’re heading out, make sure to tell the wife and kids to take in the Ship Bottom Fishing parade, beginning at noon.

Much of the central and eastern United States can expect mild weather often from December into January due to El Niño.

El Niño occurs when tropical Pacific waters are warmer than normal, and the pattern can last several months to a couple of years. The warm waters can impact the weather patterns around much of the globe.

While the pattern may not be good news for cold weather enthusiasts, it will translate to savings on heating for at least part of the winter.

According to AccuWeather Chief Long Range Meteorologist Paul Pastelok, an ongoing and strengthening El Niño may succeed in keeping arctic air out of much of the United States well into the winter.

"We see impressive signals that the overall mild pattern that got rolling in the Central and Eastern states during October and November will hold through December and into January," Pastelok said. 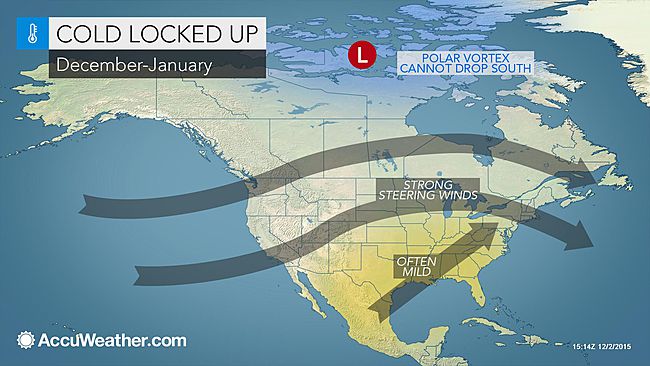 "El Niño is contributing to a strong belt of westerly winds across Canada that will help keep the polar vortex strong but locked up near the Arctic Circle," Pastelok said.

This does not necessarily mean that every day will be mild and free of snow in the central and eastern U.S., but rather cold and snowy days will be infrequent.

As temperatures naturally trend downward into January, some storms may still produce substantial snow, especially in the northern tier, in the Appalachians and the Central states. However, the snow may not lay around very long as temperatures may not remain cold enough.

Below: Ever wonder how photographers get such good close-ups of birds???? 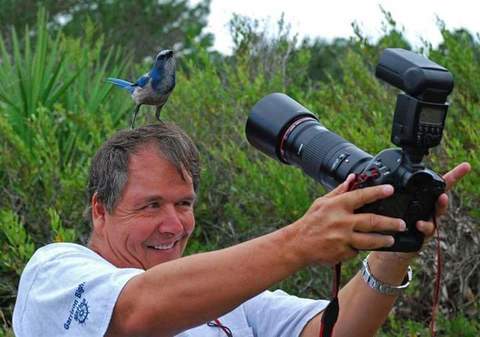 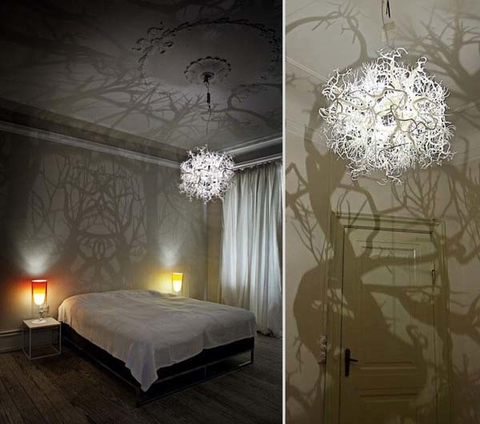 Four Prince George’s County residents were charged with poaching 33 striped bass in Kent Narrows as a result of an ongoing effort by officers to target illegal fishing hot spots.

Epifanio Malave, 60, of College Park, received citations for possessing 15 undersized striped bass and possessing 13 striped bass over the daily recreational limit. Most of the fish were able to be released back to state waters.

With these cases, a dozen people have received citations since Aug. 1 for recreational fishing violations in the Kent Narrows. The charges involved the poaching of a total of 164 striped bass.

“Poaching is not only illegal but also a threat to the sustainability of striped bass,” said Lt. Col. Ken Ziegler Jr., NRP acting superintendent. “We will not tolerate the blatant illegal taking of this resource at the expense of tens of thousands of recreational anglers and watermen who abide by the law.”

Sandoval, Villanueva and Linares can avoid a court date by paying pre-set fines of $500, However, if they choose to go to court, they face the same maximum fines and penalties. 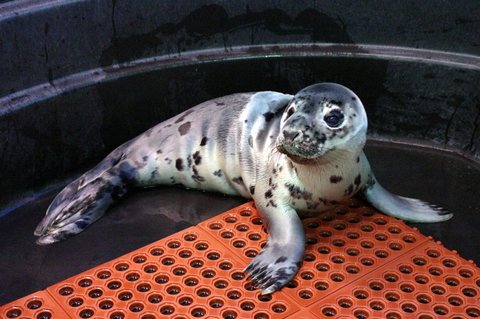 Cute seal picture to remind you there is still time to donate for
#GivingTuesday!
smile emoticon We still quite a way to reach our #GivingTuesday goal so please spread the word to any friends and family that would like to support MMSC on this day!
http://mmsc.org/ways-to-donate/givingtuesday Pic from this weekend's striperfest. Hammered the bass on the white 7" Jiggn Hogy with a 1 ounce head. The current was ripping hard and getting the jig to the bottom and bouncing it back was the killer technique. Glad to have the Hobie Revo 16 to hang in the rip, much less work in the long kayak! 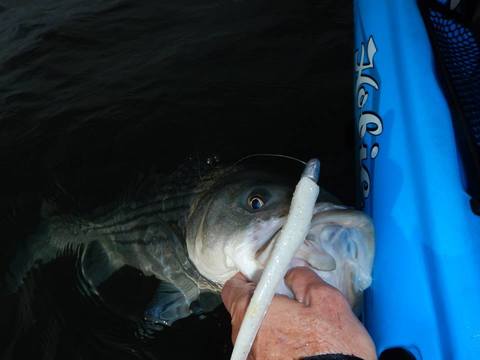 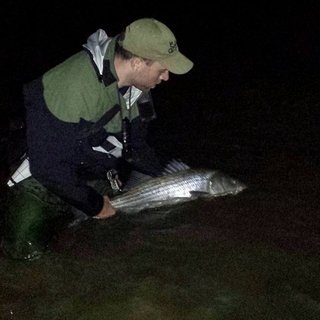 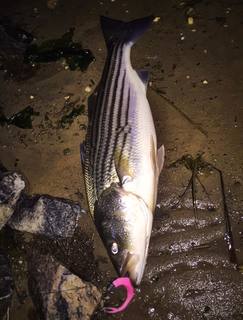 This 42-pound brown trout caught in New Zealand will stand as a new world record. What was your biggest trout. "Sasquatch" gets shotgun pellets removed after being shot at by the trigger-happy hillbillies from the TV series "Mountain Monsters" while the show was visiting Africa. 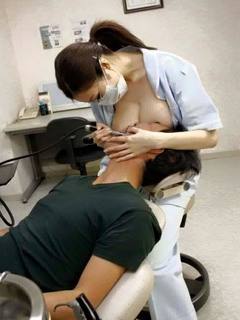 Tilapia has been America’s favorite fish for a long time. It is easily available in any grocery store or restaurant for a relatively low price. It is easy to prepare and doesn’t have that annoying fishy taste. However, don’t let convenience and taste lure you in.

Recent reports have stated that tilapia is, in fact, bad for your health. In America, Tilapia are raised and cultivated on farms in very unnatural habitats. Instead of being fed algae and plants, they are fed GMO corn and soy pellets. (Keep in mind that wild tilapia feed off of algae and plants, thus making it much healthier than farm-raised tilapia.)

Furthermore, cultivated fish carry higher levels of the toxin, dioxin, than wild fish. To be exact, farmed tilapia has eleven times more levels of dioxin than tilapia found in the wild. If you’re not familiar, dioxin is an extremely toxic chemical that can take a decade for the human body to completely filter out of its system.

If that isn’t enough with chemical overload, let’s not forget that tilapia are loaded with deadly pesticides. Yes, farmers treat the fish with pesticides in order to control sea lice. Unfortunately, cooking the fish doesn’t eradicate the pesticides.

Ailments that can come from consuming farm-raised tilapia include: coronary disease, asthma, arthritis and more! People are better off eating a juicy burger loaded with fatty bacon than a slim meal of tilapia. Think twice before picking up that value pack of tilapia at the grocery store.

Why they say it's best to never look back ...