On first seeing that new makeover ...

Wednesday, August 19, 2015: The ocean remains churned by south winds, though not as rough as it has been. There is also a decent east swell to three feet, making surfcasting and inlet passages quite bumpy.

The south wind aren’t going anywhere fast but will vary greatly in strength, with the usual late-day push of gustier conditions. These winds will be hardest nearshore.

More problematic is the thickening air and enhanced t-storm conditions. In fact, we might be seeing the worst pop-up thunderstorm stretch of the summer. 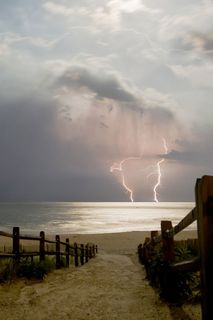 With real-time radar at the disposal of everyone, it comes down to seeing problems building and heading in to port (or off the beach) with leaving plenty of time to spare.

I know this is a broken record but even hearing thunder in the distance means the air around you is becoming electronically charged. You’re a player in a deadly bolt game.

We only have to look back a few years to when folks beaching on a sunny IBSP were fatally struck down by a bolt seemingly out of the blue but actually haling from a storm cell well off to the south. What wasn’t mentioned by the media was the fact some folks had quickly left that beach after hearing distant thunder. A life-saving move to be sure.

In case you think I'm overstating this:

ISLAND BEACH STATE PARK, N.J. -- A bolt of lightning struck two men tossing a football around on a beach on a clear day, killing one of them ...

I’m sure no expert on offshore fishing, having gone out maybe 20 times, tops, but I still spend computer time ogling over the canyon water temps and those famed and productive eddies. And, as of late, there sure seems to be some mighty nice water showing off shore; breaks everywhere. Hell, you can almost see fish from the satellite shots. 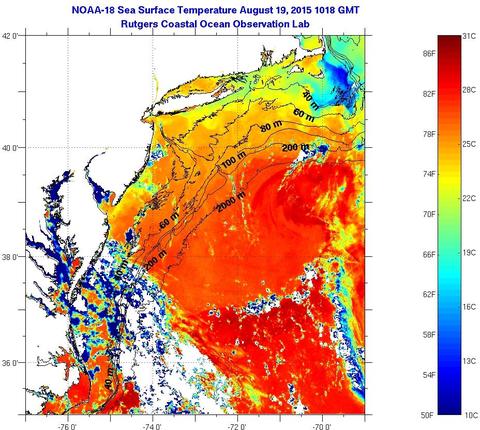 Being nonconversant about big game fishing the canyons, I’ve always wondered if it’s first come/first serve out there, meaning the early bird gets the billfish and tuna.

Most of my OS trips have started in total deep darkness, right around last-calls at the bars – with me then sleeping all the way out. Trolling would commence at the mere hint of dawn. The theory seemed to be the earliest boats nab the fish – and reduce the number of available pelagics so later boats get the scraps. However, the few times I’ve been on a troll/night chunk combo, we’ve passed boats heading in, reporting squat, then the instant we start troll, we hit nonstop hookups.

Well what a great experience with
Joey LaMonica on the Wild Fish . Myself and
Ryan Watermelon McMahon got to see some awesome crazy shit out on the canyon grounds ..I smashed my hand on the main line when I was jigging the green stick, Mr big eye smashed it..Then trolling in at night is down right nuts. .Boats cutting get each other off, but hearing green sticks snap away on fish is insane. Then late last evening I was able to get tight on the 50 wide stand up,harness up and went to work on a pig of a big eye..tape out at 71" ..this is what I needed to ease my pain ..

Closer to my surfside realm, I have absolutely no doubt that early and late angling sessions rock when surf fishing. Of course, we’ve all seen that newbie score an insane fish at midday, on a tourist packed beach, under a scalding sun, at max low tide, barely any deep water and using thawed crab bunker for bait.

It was my late buddy Bruce Hoagland who had an interesting theory on that scenario -- after a learning-to-fish fellow weighed in something like a mid-50-pound striper caught under exactly those conditions. I’m sure Pat H. remembers that. Bruce said that monster bass had likely learned the ropes of when anglers were stalking and only moved in close under the dead opposite conditions. Hmmm.

You have to believe a bass after being caught-and-released, or hooked and escapes, picks up some smarts about when (time of day-wise) it’s best to stay away from the shoreline. The late “Big Jim” H. was fond of saying, about monster cows, “How do you think they got so big?” Likely some smarts involved in there somewhere.

RUNDOWN: As for fishing in close, here and now, the fluke continue to fill the bill – and freezers. One meat fishermen mentioned, during radio chatter, “My freezer is as full as I’ve ever had it.”

I fully realize that freezer fullness doesn’t apply to everyone. And who’s to say this isn’t that anglers first year of retirement, so he can fish his brains. Still, the overall larger size of the fluke have to be offering some mega-fillets.

6.35 pound fluke one of many for dinner tonight. Good day on the ocean

FREEZE ‘EM RIGHT: Did you know it’s better to section large/thick fillets before freezing? That allows for a rapid crystallization to the core, which you want. Otherwise, a thick fillet quickly freezes on the outside and slowly freezes on the inside, exactly what you don’t want. Then, when thawing, the uneven melting of a too-thick fillet can damage the outside flesh, which thaws first then essentially sits there getting mushy. Also, if going from the freezer to the fire, the outside of a thick, frozen fillet cooks first and the inside only gets warm. You then have to overcook the outside to heat the inside. That thickness factor is why there is an industry standard for thickness when freezing tuna. You’ll see that at fisheries and groceries. The one-inch-or-so cut allows rapid and even freezing. Throwing a massive chunk of tuna straight into a freezer will lead to wild swings in freezing and thawing times, relegating it to tuna salad usages – at best.

Below: Manatee sightings in Great Bay ... please boat carefully. Story by DOWN THE SHORE  A BLOG BY JUSTIN AUCIELLO 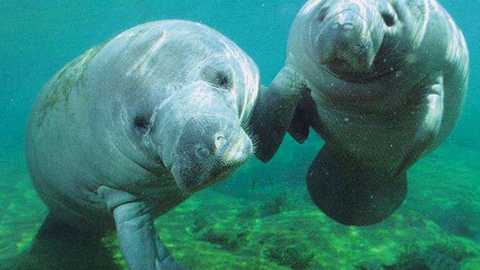 They have now been spotted south of the Barnegat Bay in the Great Bay, which is "one of the least-disturbed marine wetlands habitats in the northeastern United States," according to wikipedia.org.

The marine mammals serve as a barometer on the health of marine ecosystems, according to Marine Science Today.

“Manatees are the proverbial ‘canaries in the mineshaft,’ as they serve as indicators of their environment and may reflect the overall health of marine ecosystems,” Alonso Aguirre, executive director of the Smithsonian-Mason School of Conservation, told the publication.

While rare in Mid-Atlantic waters but not without precedent, manatees are prone to serious injury because of their slow-moving, curious nature, marine mammal experts say.

Sheila Dean of the Marine Mammal Stranding Center advises boaters to be aware of the possibility of manatees in the water.

"These warm temperatures are keeping manatees in our area," she wrote on the center's Facebook page. "Keep a lookout while you're cruising in your boats and jet-skis, especially in areas near marshes and docks."

The marine mammal is protected by the federal Marine Mammal Protection Act of 1972 and the Endangered Species Act of 1973.

"Observations may include a swirl on the surface caused by the manatee when diving; seeing the animals back, snout, tail, or flipper break the surface of the water; or hearing it when it surfaces to breathe," according to a Florida Fish and Wildlife Conservation Commission viewing guide.

"US Fish and Wildlife is monitoring these protected animals, and we give them updates on where the manatees are being spotted," she wrote.

REPLEN UPDATE (RE-DO): As to our new replenished beaches, I got worrisome word that the Beach Haven and Holgate area might not be seeing sand for many moons. DredgePadre Island, one of the two dredges working LBI, has been removed from its current LBI duties to undergo “required” routine maintenance and repairs down in Morgan City, LA. It’ll take upwards of three months to spruce her up.

The lone remaining dredge, Dredge Dodge Island, will soon be heading north to “fill in” the unfinished portions of Brant Beach. She could be joined by Dredge Liberty Island,now down off Ocean City, NJ, but expected to head this way soon.

It seems that Brant Beach touch-up work will pretty much round out the replenishment summer.

Per some reports, the Queen City might not be sanded upon until late in the year – and Holgate even later, though the arrival of that OC dredge could speed up the process. Currently, the Army Corps is not officially announcing what's up beyond the next couple/few weeks.

OUT OF THE BLUE VARIABLE: At first blush, it sure seems BH and Holgate will just have to sit back and wait for their sand fixes, which don't seem to be coming before the end of the hurricane season, per a report given at a recent Beach Haven meeting. It would therefore seem that we'll be suffering through the ongoing erosion of the Holgate Wilderness Area.

The good news is the Holgate surf fishing will seemingly not be impacted by replenishment sand throughout the 2015 LBI Surf Fishing Classic.

Now to an interesting variable. The state of New Jersey, via the DEP, is possibly closing in on a combo channel-cleaning (of easterly portions of Little Egg Inlet) and  replenishment of Holgate and Beach Haven.

I only recently heard about the possibility of LEI being used as a close-in sand borrow site, though the plan has apparently been in the works for quite some time. It has even cleared primary state-level permitting hurdles.

This LEH Inlet effort is purely at the state-level, though the Army Corps is onboard, providing Great Lakes Dredging also finds it doable.

If it were to fly, final plans would be made to dredge the Little Egg Inlet and use the sand to enlarge south end beaches. Such an effort surely aligns with what many of us thought would be a match made in bird-stoning heaven – as in killing two birds with one stone, though we might not want to use that expression too freely in the presence of the Forsythe Refuge.

Interestingly, there are some fears about what might lurk in the deep and clean sand in and around Little Egg Inlet, including sundry shipwrecks, dating back over 500 years. And wouldn't it be horrible to suddenly have gold doubloons and pieces of eight being spraying all over the beaches?

I’ll keep you posted on this Little Egg Inlet angle, as plans progress. I think it’s a prohibitive long-shot but Army Corps folks aren't as cynical.

The Fluke are safe this week. Hauled out at Grant Boat Works in Forked River.

If i get one more call that's it for these until Friday! My fishing level of addiction is kicking in idk how much longer i can contain myself. Still need package tags waiting for the print shop so it just might go down!