We talk about the way sharks freak out people. Well, this shark definitely sees things from a different angle. In fact, I'm kinda freaked out for him. 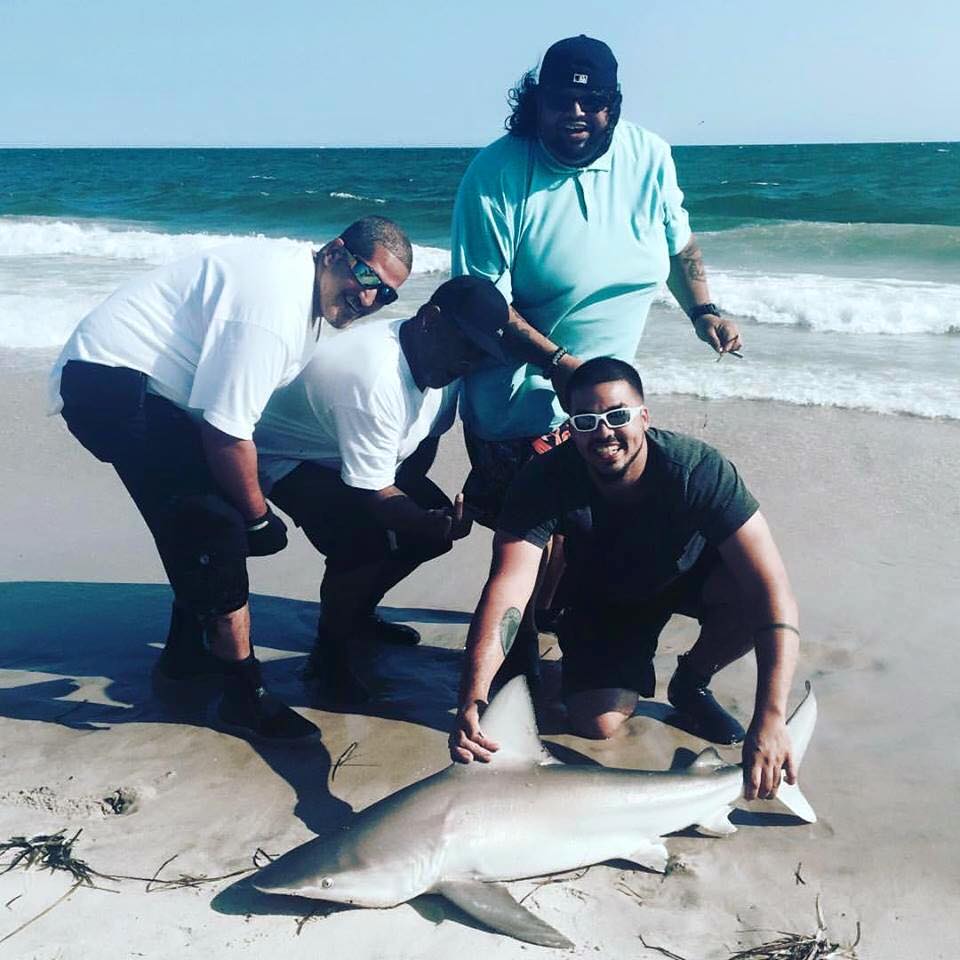 Some dogs can find truffles. Big deal. But a pit bull that can find stripers... Tuesday, September 08, 2015: Not that it should come as a big surprise but the crowds left on a dime. So to speak. Sure, the Labor Day weekend makes a quantum change but it doesn’t always show as much as it did this year, due to the maximal lateness of the holiday weekend this year.

While I was stuck to my desk for much of the day, I did a few outs-and-about and while it wasn’t ghostly quiet, it was weird just nonchalantly crossing the Boulevard with hardly any vehicles in sight.

As to the beach, any lingerers have the sands to themselves, not to mention lifeguard-less conditions. That unwatched solitude works just fine until you go for a lonesome swim in the 75-degree ocean and quickly realize you’re not as hot at swimming as you were in the past.

When pondering drowning, the trick is to shout your lungs out for help. I’m dead serious, in a living way. That’s the one time you’ll be glad there are so many nosey ocean-fronters out there … until they go snow-birding south. Also, wave one or both your arms. This remains the universal signal for help.

When you realize you’ve gotten some attention, lie on your back and float, thinking happy thoughts.

I know full-well about the downward facing ocean survival position – I once had to practice it for a solid hour -- but that’s for prolonged periods of surface survival. What’s more, you really have to know how to do it. When help is only seconds away, simply staying afloat and remaining cool as a calm cucumber is the survival ticket.

RIP-OFF REPEAT: I had yet another report of stolen fishing goods. This incident was a right-under-my-nose theft. “Brazen theft” is the most common term.

I used to be one of the worst violators when it came to keeping rods and reels on my truck overnight. That changed when my buddy Kurt lost his entire quiver of rods and reels to stinkin’ thieves. I then began backyard storage, until my buddy Lou lost everything from his backyard, including tackle boxes. He and I went over the loss and his pimped-full tackle box was easily as valuable as the rods and reels. Of course, if you lose a van Staal, you’re talking an immediate $800 replacement cost.

Worst theft I even heard of was from a boat that geared up the night before an offshore trip. The loss approached $10,000 in gear and electronics. The ugly irony there: the captain had turned off his motion-activated outside lights because he knew the crew would be coming very early to prepare -- and he didn’t want to disturb the household with the lights coming on. (Wasn’t in NJ)

By the by, outdoor motion-activated lights and video cameras cost next to nothing now. I kid you not. There are night-vision vid-cams for $100. When talking about fishing equipment worth thousands, it’s more than worth it to give the cops some visual evidence to go on. Vid-cams have already worked. I wrote about the bust of neighbor’s kid who grabbed $1,100 in fishing goods before forensics -- and a vidcam -- ratted him out. The kid came from a great family – he was just a certifiable kleptomaniac, as proven by the fact he kept everything. So you can imagine when there is theft for drug money involved. Yes, it happens even here.

DRUM BEAT CONTINUES: More and more black drum are being caught in a panfish manner, almost exclusively bayside on light gear and small hooks. One fellow was catching them off a backyard dock where he had never caught anything before – until he recently saw some tourists hooking up like crazy off a nearby dock.

As to eating drum, when utilized at or near the minimum size, they are exceptional. I kid you not.  And clean as a wormless whistle.

Loads of reports of blowfish to beat the band. The odd thing is many of these are being free-caught, meaning there is no chum involved. You know there are a lot of them out there when you can just anchor up and begin bailing them, along with kingfish.

Speaking of which, the surf is holding a few kingfish but the bay has way more. It’s only a matter of time before the beachline comes alive with them, though that might still be a few more weeks.

Kingfish migrate in large, loosely gathered schools. I’ve seen them when diving. They might spread 50 yards wide and twice that much north and south. They never stop nosing into the sand. When you see a little cloud of sand form under one, it’s hit something good and other nearby kingfish come rushing over.

Interestingly, I’ve seen very large stripers nose in with the kingfish and they couldn’t care less. It sure doesn’t look like there is much of an antagonistic forage/prey relationship at all.

Obviously, bluefish are a whole other ballgame. Down OBX way, I’ve seen feeding kingfish and spot vanish in a flash -- and a minute later the blues blast on-scene.

The yellow-tailed fish being caught are either yellow snappers or (if the head is sorta flattened) jack crevalle. They have become astoundingly common hookups of late, as have the now joked-about banded rudderfish. 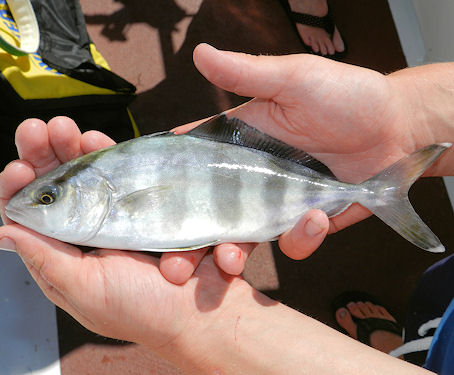 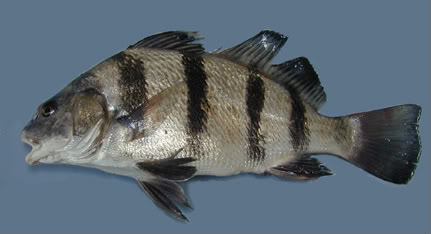 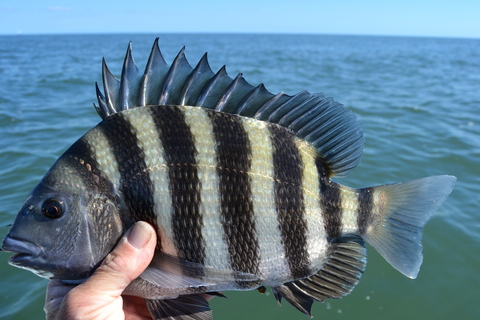 Below: A living sand dollar. 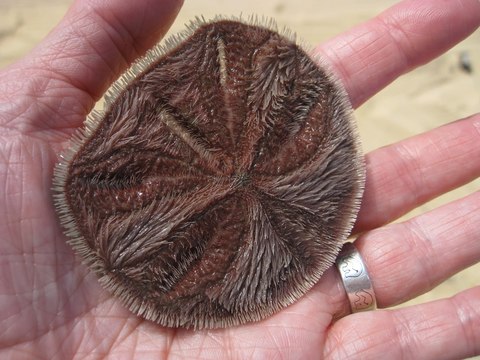 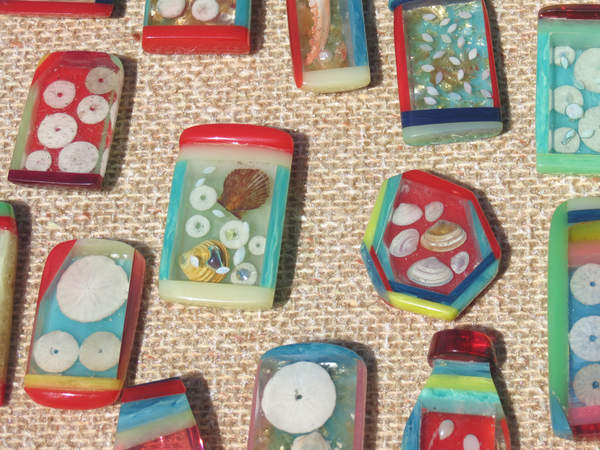 E-letter: I would like to ask for your help about a concerning matter.

I know that you have written about it in the past. However, I am so concerned about the sand dollars recently appearing on LBI. I know the overwhelming excitement and thrill that comes with finding an ever sought after sand dollar wash up on the shore of LBI. I too have spent years searching for a valued sand dollar and know the joy that comes with finding the perfect one after spending hours strolling the beach for one! Hence why I can understand why some are eager to collect sand dollars in overwhelming quantities.

Unfortunately, I see that people are taking advantage of the recent influx of these precious marine gems at the shore. I know so many are doing it unknowingly, but visitors are collecting live sand dollars. I have tried often to suggest and explain why it is not a good idea to take these living creatures home. However, I sadly know these words have fallen on silent ears. The majority are refusing to hear these warnings. I see people collecting handfuls near the areas that are close to the restoration project. I just feel it is so unfair and cruel. It breaks my heart that people will not respect these creatures. Is there any way to get the word out to protect these sand dollars? Perhaps explain the difference between a sand dollar that may be collected versus those that should be left behind? Help us restore the store and preserve the beauty of LBI!

Thank you so much for your time!
Jenna R

(Jenna, Fascinating. The closest I've ever seen living sand dollars in the surf are the Outer Banks, NC. I'll check to see if live ones are colonizing on LBI, brought on by either transplantation via replenishment or represent yet another northward movement of marine creatures due to warming oceans. Many of the bleached white sand dollars coming in with replenishment are very old, possibly from previous oceanic warming events. In recent history, there had never been sand dollars on LBI beaches prior to the replen work. j-mann) 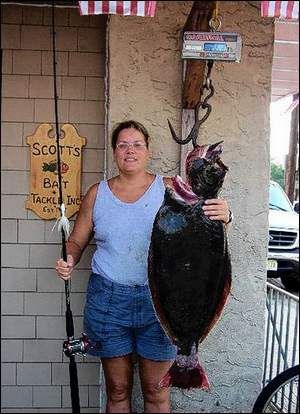 .... Barnegat Light has the BEST mayor .... the day after Labor Day and the traffic lights are back in their "blinker" mode .... thanks Kirk

Fishing with my bride. Blues, kings, blows and crabs. All behind the shop. Eatin good tonight. 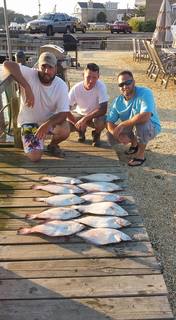