Tuesday, October 31, 2017: Might this be the cleanup that sets things off, fishing-wise?

This week's "Why it's best not to let uncles babysit."

The real reason behind the disappearance of honeybees ...

And to think the blue car was then cited for having a reverse light out ...

And doing it quite well ... 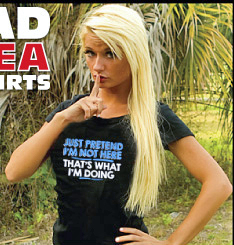 When I used to go all out for Halloween. That's me covered in quarry clay (gorgeous sculpting clay taken from where Perry Lake is now located) with smooshed in steel wool ... and a lovely non-intimidated Candy Svelling (Kooyman). My skin looked great for a week afterwards. 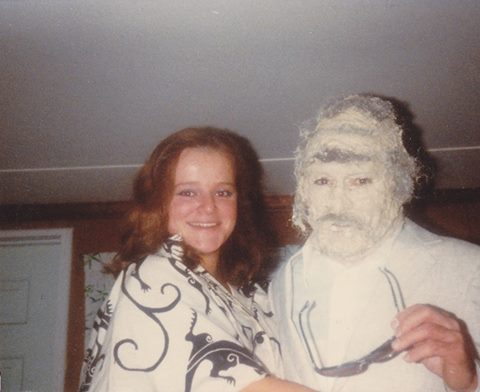 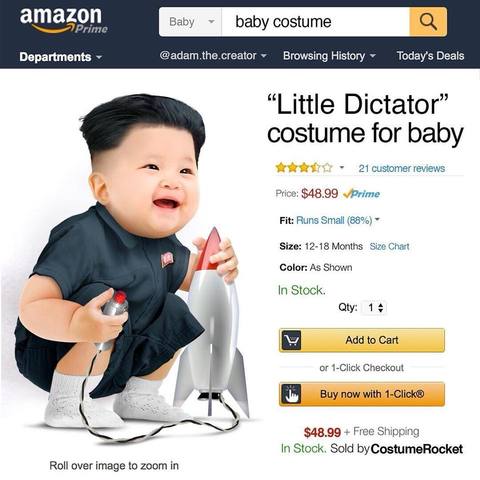 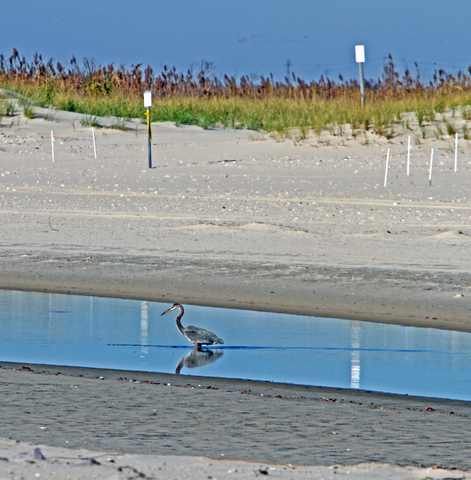 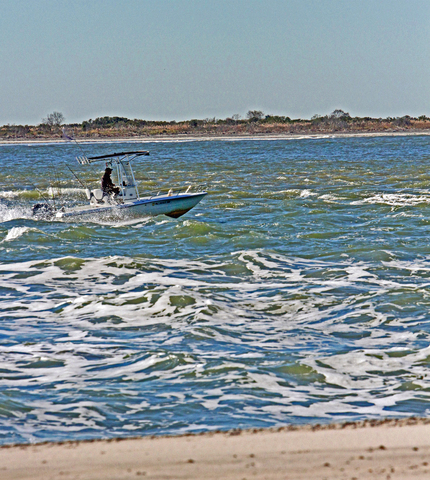 Tuesday, October 31, 2017: The ocean remains mucked up – turbid from wind and rain. It  should clean up under the influence of these honking west winds.

Might this be the cleanup that sets things off, fishing-wise? I’m not banking on it but I do have my heavier rods, reels and tackle at the ready.  Bunker chunks are on my horizon. I’m also digging a slew of local bloodworms in hopes of enticing just-keeper surfside stripers – which might pay out bigtime, the way this year’s LBI Surf Fishing Classic is going, i.e. ever so slowly.

It’s an anniversary most folks would rather not celebrate. It’s the fifth anniversary of our unwanted marrying into Superstorm Sandy; a shotgun wedding from which there was no easy divorce. Some folks are still paying an odd form of matrimony to her. At the same time, many have taken the “LBI Strong” route and now somewhat celebrate their post-Sandy perseverance from within mighty-fine, newly-built homes, replacing ruined ones.

As to fishing, I’ll whisper there is very much to be desired. If it’s not the waves, it’s the weather. If not the weather it’s the tiny matter of no frickin fish. But who’s complaining? OK, you can all put your hands down.

If I had to pick a prime culprit behind the slow surf fishing, it’s the temps, both air and sea. What’s more, we’re far from over this freaky-mild fall. Another bubble of mild air will be arriving just in time for November. If you think the 70s were weird in October, wait until they show up when Christmas jingles are already thick in the air.

The ongoing too-mildness will put to test the scientific assertion that, in the long run, it is the shortening of days, along with other astronomical triggers, that get forage fish migrations and gamefish detonations on the autumnal move. With the ocean still as much as 15 degrees above normal, we’ll definitely need cosmic influences to spark our once-famed fall surfcasting bite.

Not all that long ago, fall was a slam-dunk time to surfcast for bass, blues and weakies, with the likes of red drum, Spanish mackerel and spotted sea trout thrown in for good measure. Wethinks something has gone amuck and awry. Here’s hoping the amuckawryness soon fades.

To its credit, the 2017 LBI Surf Fishing Classic has seen a spattering of striped bass action, albeit smallish in nature. Nonetheless, it’s great to see legal weigh-ins of any dimensions.

(Even a blind squirrel finds an acorn once in a while. I got this 50-lb event-winner throwing a yellow Bomber into a striper frenzy feed just after dark in Holgate. I was driving and saw the bunker beaching themselves. I went with a bait rod and waded in a short ways. No takers. When I heard fish literally splashing around me -- and bunker banging at my legs -- I rushed back and grabbed a modified plugging rod. A fat rod meant more for light bait fishing. It happened to have a "school bus" Bomber on it. First cast fish on ... lost quickly. Reeling in that same initial cast ... bam! The fight was so-so. I'm really bad a time-frames but it didn't seem all that long getting it in ... based on the prayers I was saying, including the mantra of a just-hooked fish "Lord, just let me get a look at it then I don't care if it gets off."  Not for nothin' but the fish was so deeply hooked -- twice trebled, one hook in that rawhide side of the mouth -- I could barely get it out. A break-off would have been either line breakage (I was using Ande premium mono) or a knot-failure.

By the by, I fished an average of six hours a day, just about every day, that fall. Ironically, things had gotten so windy and crappy that day I wasn't going out.) 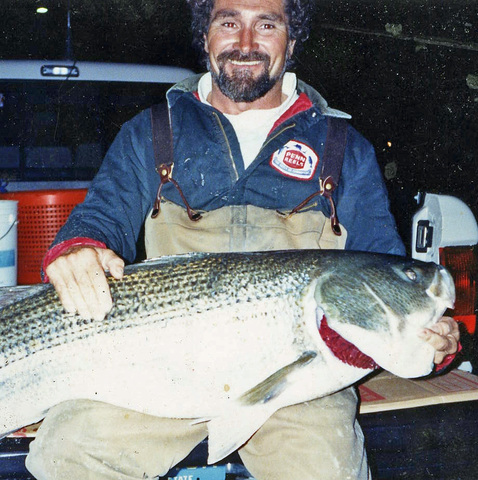 Below: When the tourney had south and north boundaries: Jeff Konnor, Frank Panzone and Jingles. Need info on this tourney winner ... 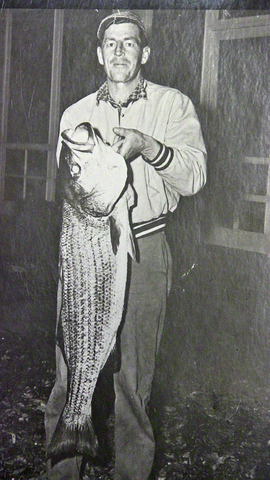 With over a month to go in the Classic, cows will surely come on-scene. The first trophy stripers will likely spark a rush to the suds, considering there are over 670 antsy entrants in the nine-week event.

I am getting a fairly brisk flow of folks emailing me – from out of the area – to see if I have any insider info on fish being caught. Believe me, the instant I get word of a bite, it goes in here – whole never burning a spot. Truth be told, most everyone in fine with simply hearing fish are being caught anywhere on LBI.

There is still loads of baby bunker in the back bay, per some lagoon folks. I’m not sure that means squat or not. Still, it’s never a bad thing to have forage fish in the system.

I had an odd report of some bluefish caught in the Barnegat Inlet area, by boat, that had crabs in their bellies. Yes, that’s sorta odd. I’m guessing the crabs are passing through the inlet and become a convenient snack for what looked to be (photos) 10-pound slammers. At the same time, I can’t help but wonder if there is actually a shortage of forage fish … at least momentarily. As you might know, there is a concerted effort to increase the protection of bunker. While part of the cause is to assure forage for ospreys, eagles and such, there is an angler component offering the welfare of stripers as a cause to reduce commercial harvesting of the menhaden. While I was asked to get involved, I’m conflicted. I still hold the far that over bassification can unbalance the balance of nature, I’m more concerned (legitimately) that massive schools of big bunker just off the beach draw bigger bass away from surfcasters. I know that dreadfully surfcaster-centric but why shouldn’t we have the right to stand up for our two cents worth?

This wild pitch/pull insta-sinking has gone viral ... for good reason. It can happen just that fast. https://www.instagram.com/p/Baz02FXlxTs/

Why a Great White Shark Jumped into Man's Boat

A great white shark jumped into a boat off the north coast of New South Wales, Australia, on May 27, 2017.

An Australian man got the surprise of a lifetime when a 9-foot (2.7 meters) great white shark weighing 440 lbs. (200 kilograms) jumped into his boat.

Terry Selwood, 73, was fishing off the north coast of New South Wales, Australia, on Saturday (May 27) when he suddenly found himself face to face with the ocean predator.

"There I was on all fours, and he's looking at me and I'm looking at him, and then he started to do the dance around and shake, and I couldn't get out quick enough onto the gunnel [or gunwale]," Selwood told ABC news, referring to the upper edge of the side of the boat.

The shark thrashed violently in a boat only 4.5 feet wide (1.4 m) and 14 feet (4.3 m) long. Selwood was able to grab the radio and call for help. A local marine rescue unit at Evans Head came to pick him up and later towed his boat back to port. [See Photos of Great White Sharks Breaching the Water's Surface]

Besides a minor cut on his arm, Selwood was unharmed. But why would the shark jump into his boat?

The great white shark on the deck of Terry Selwood's boat.

Selwood claimed he had no bait or lures close to the surface to tempt the shark to launch some 4 feet (1.2 m) out of the water and into his boat.

There are just three reasons a great white would ever jump into a boat, said George Burgess, director of shark research at the Florida Museum of Natural History.

"It's either caught by the angler, it follows a hooked fish to the surface and its momentum has it jump out of the water onto the boat, or a 9-foot shark in the ocean at random jumps up and lands in the boat," Burgess told Live Science. "The first two instances are much more likely than the last."

Despite what you may have seen on Discovery Channel's "Shark Week," great whites are not well-known for their jumping abilities, Burgess said. Mako and thresher sharks are more given to leaps from the water than great whites, he said.

A shark jumping into a boat without first being drawn somehow to the boat would be extremely rare, Burgess said.

In most documented cases of sharks landing in boats, the people involved were either fishers or biologists. In a 2013 case, a mako shark jumped into the back of a fishing boat off the coast of New Jersey, according to USA Today. In 2011, a great white shark leapt into the back of a South African research vessel, News Corp Australia reported.

"Sharks are unpredictable animals, but they don't just jump into boats for no reason," Burgess explained.

A great white shark breaks the water's surface only while hunting for food, Burgess said. At those times, the animal swims beneath prey and may look up and recognize the silhouette of an animal like a seal or porpoise. The shark then swims at great speed straight up, and the tremendous momentum generated launches the predator up from the waves, Burgess said. Great white sharks can swim at speeds of up to 25 mph (40 km/h), according to ReefQuest Center for Shark Research.

The silhouette made by a 14-foot boat would automatically send a signal to any shark that this potential meal is far above its weight class, Burgess said. A smaller boat, however, could attract a shark mistaking the vessel for prey, he noted.

If your boat just happened to be passing a shark at the exact moment it was striking at its prey, the animal could land in your boat without any lure or provocation from you, Burgess said. But the odds of that happening are incredibly long, he said.

"We're missing a lot of information. I'd certainly need that information" about the Selwood case, Burgess said. "My inference, and it's purely inference, is that one should look at the story more closely."

Alby Pavone 2014 blitzeoween ! Remember how beat we were from fishing all night with only a few fish ? And decided to sleep in the lot . Woke up and decided to go make a few cast before work not knowing what was about to unfold ?? Meanwhile we were supposed to be in work and didn’t make it till afternoon haha caught fish for 3-4 hours ! that was a very memorable morning .