Fails to stop for pedestrians crossing ... Where's a cop when you need one! Oh, here's one now.

This week's "He seemed so much brighter at the hospital nursery" goes to ...

Tuesday, May 23, 2017: Wasn’t all that bad today, though all I managed was a couple walks to see the street-end ocean, Surf City. We’re putting out a huge issue for the holiday weekend. Hopefully you’ll be down here to pick up a live copy from one of our many pick-up sites. If not, tune in at www.thesandpaper.villagesoup.com. My weekly column doesn’t go up until Thursday.

I’m glad I only get to predict the weather at an amateur level since I wouldn’t want to bank on forecasting the next few days … right through the big weekend.

Like most other sky-watchers, I see an unstable air mass now moving in, with some serious NE tomorrow a.m., then fading. I see way lower chances of rain than is being predicted on many of the big-name sites. In fact, I wouldn’t pre-cancel any event from Thursday onward until looking up to the heaven that very same day.

Surf and jetty fishing will be doable every day, rain gear unworn but at the ready.

Boat fishing can skip much of tomorrow’s NE SCAs … but stay ready to launch by Thursday’s drop to non-radical 10 to 15 mph SE winds. Saturday looks super after early-day westerlies back down.

That said, we’re in a big of a bite funk. There are still a goodly number of bass and small blues to be had but it’s no slam dunk. Still, it’s going to be worth the relaxation factor of holiday free time. Unlike me, I’m betting bait fishing from the beach will be the better go, though who doesn’t take a plugging rod with them when crossing the sands?

For beachgoers, I’ll go out on a forecast limb and note a dang decent chance of periods of genuine niceness Saturday and Monday, with west winds Saturday, turning to a steadier SE through Monday. If the sun busts out, beaches will be packed. I’m one of the few LBI folk who loves seasonal beach crowds. They remind me of the insanely good times I had as a kid, just hanging out in Beach Haven, sunning – sometime all frickin day! Those transistor radio time were hot as the bikini gals cruising the water line. Of course, what they called bikinis back then were granny-panty sized by nowadays standards. 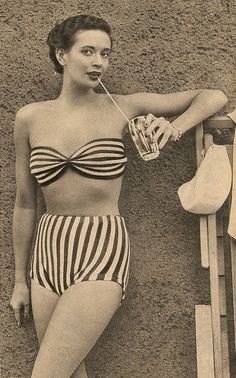 ATTENTION OFFSHORE-QUALIFIED  MATES: Capt. Lindsay Fuller of the vessel June Bug is looking for a canyon-trip mate for a June 16th trip. If you're trained, contact him by going to http://www.fish-junebug.com or give him a ring at 609-685-2839. Are you ready, Freddy? 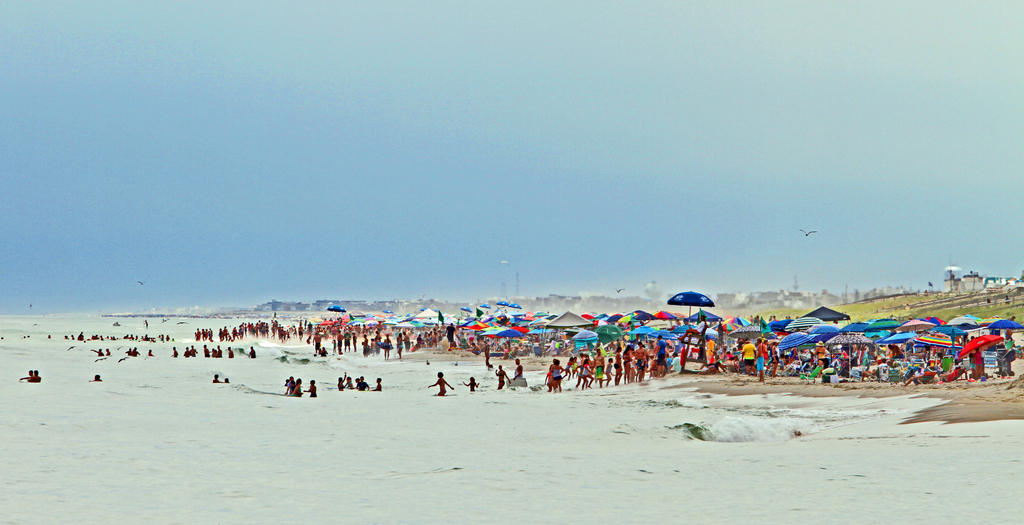 And this year the LBI Striped Bass Grand championship has made an exciting change to the format.

The winners will now be based on LBI's 3 out of 5 striped bass tournaments,

the LBI Cup
The HPVC Striper Shoot Out
The Sea Shell Striped Bass Derby
The Maximillian
The PBA.

You can fish 3, 4, or 5 of these contests and awards will go to your top 3 fish (1 per tournament). With format change, hopefully anglers will try to fish all 5 events...AND...can still participate if they are unable to fish 1 or 2 of the events!!

Sorry for the delay in reporting .  Over the weekend I ran three trips in two days. The ocean was a little sporty so we stayed in the bay.  Intel has it that the inlet is loaded with fish but I just could not safely fish it this weekend.  Saturday morning the Ernie Dellheim crew from worked hard for the blues.  Fish landed were 4 - 10 pounds and feisty.  For part of the trip I fished in close proximity to my good friend Capt. Bill of Mole’s Charters, who had better success than us boxing thee bass and releasing five others.  Nice job Bill!  Anyone that has watched George Poveromo on TV might know that George always talks about how “subtle differences” can make or break of fishing trip.  Not sure if Capt Bill was doing anything much different than I Saturday morning but Bill if you had a subtle difference, throw me a bone here buddy!  The morning trip also released a nice 20" fluke that fell to a dead stick bunker chunk on a 9/0 hook with a wire leader. Go figure, but it even gets better from there…..On the PM trip, the Pereni family was out and worked hard to put some fish on the deck as well as back in the water.  Well…. on the same fluke slaying set up used on the AM trip, they one upped the AM trip with a fat 6 pound fluke. Attached is a picture before it was released. I know where I’m fishing opening day of fluke season this week ;). Sunday I had a crew from Canada for a little fishing and eco-touring. Weeds were the word of the day but they did catch some fish and had a great time.  I am available Sunday and Monday, Memorial Day.  Just give me a call if you’re interested in booking one of those days. Screaming drags, Went bottom fishing today caught a nice amount of ling and flounder ...threw tons of nice seabass and black fish back hundreds...came back in and ran into the biggest school of bluefish ever ...top water explosions blue gators leaping out of the water and reels screamin ... Complete insanity!!! Look at that blue fish swallowed a 8" swim plug 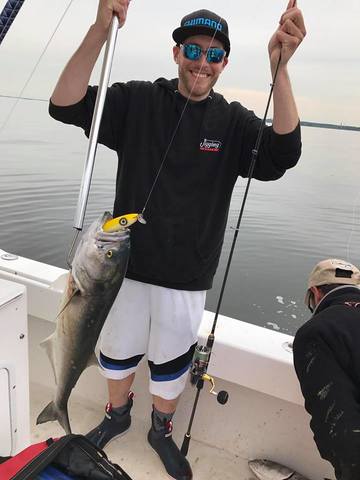 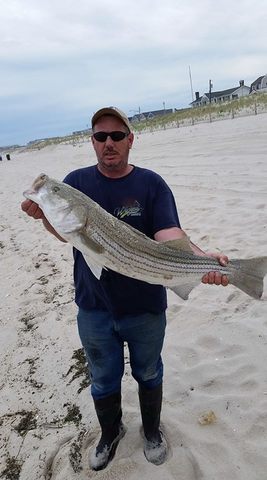 Selling a custom full enclosure made by Kwik Canvas AND a winter cover from Fisher for a 1900CC Maycraft w/factory tee top. Both were used for 2 seasons. Boat in in Florida now and I have no use for them.

Asking $500 for both of them. You figure out how to transport them. I can ship them at your cost but I don't know how much it may crease the windows.

If your within 100 miles of LBI NJ, pay me now and I can deliver them in September for a small fee. This timely story by Paul Fassa is both morbid and highly sunny at the same time:

According to a June 2014 article featured in The Independent (UK), a major study conducted by researchers at the Karolinska Institute in Sweden found that women who avoid sunbathing during the summer are twice as likely to die as those who sunbathe every day.

The epidemiological study followed 30,000 women for over 20 years and “showed that mortality was about double in women who avoided sun exposure compared to the highest exposure group.”

Researchers concluded that the conventional dogma, which advises avoiding the sun at all costs and slathering on sunscreen to minimize sun exposure, is doing more harm than actual good.

That’s because overall sun avoidance combined with wearing sunscreen effectively blocks the body’s ability to produce vitamin D3 from the sun’s UVB rays, which is by far the best form of vitamin D.

According to the Vitamin D Council, researchers at the University of Alabama at Birmingham recently reported that “lack of sun exposure may lead to cognitive decline over time.” It started in the open ocean off Maryland last summer and it's likely to conclude in a federal courtroom in Baltimore.

The battle over $2.8 million in prize money from the White Marlin Open fishing tournament went to trial Monday in U.S. District Court.

On the line for three New Jersey men is $2.3 million of the pot.

Then, the friends and fishing partners found out their catch might actually be worth millions.

In late August, the tournament announced that a Florida boat - the Kallianassa out of Naples, Fla. - may have violated tournament rules in the white marlin category. The boat caught the sole qualifying fish in the category.

The tournament suspended the $2.8 million payout to the Kallianassa's winning angler, Phillip Heasley, and filed legal action in a Maryland court seeking a judge to decide the outcome. The case was moved to federal court later in 2016.

Among the allegations are that Heasley and others on his boat failed polygraph examinations - a requirement for collecting a prize greater of $50,000 - and that the Kallianassa crew started fishing too early, and doctored a catch book on what time they caught the marlin.

Due to the way they entered the tournament, Kosztyu, Suschke, and Romeo could receive $2.3 million of the money, with the rest spread to other wining boats.

In a series of motions filed in the weeks leading up to the trial, exhibit lists include Youtube videos, GPS reports, emails, polygraph reports and cellphone pictures and videos.

In one court filing, Heasley's boat is described as having "a sophisticated video system" with three cameras, another still/video camera and a crew member had three GoPro cameras on the boat, and all the four men on the boat all had iPhones.

"Despite these facts, there are absolutely no videos, or photographs, of Defendant Heasley catching the winning fish," the filing said. It also said Heasley has produced only one photograph from an iPhone showing the winning fish, dead in a cooler about 35 to 39 minutes after fishing opened for the day.

Heasley, in filings, has maintained he followed the tournament rules.