Chan's first day at mime school went well -- until he was heading home.

"You know, 42, violence is so overrated ... And the penalty box is so cold and lonely."

Tuesday, May 03, 2016: Let it drip. Frogs and plants salute the skies above. And let the winds remain contained, as us under 15 mph. Lots of angler’s taking advantage of the fishing despite the moisture.

Both blues and bass are still in the house, per a couple reports I got.  Action has again slipped a bit north of LBI, but I’m also seeing some fresh hooking to our south. Keep ‘em coming. 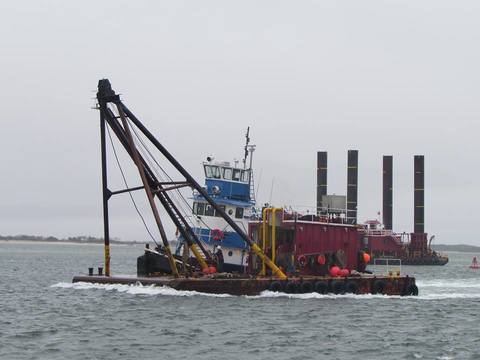 BE NICE, GUYS: A hugely inflammatory video has surfaced on Facebook, showing boat bassers loading up on stripers and then, seemingly, throwing dead bass back into the ocean. I gather it’s being done as a culling action.

I’m not going to go with names since there might be more to the story than meets the Facebook eye, as is often the case. However, a couple serious exchanges took place in the “Comments” section, pitting the keepers against the releasers.

It’s not out of fear that I stay neutral on this. I simply see and feel both sides.

I fully align with the idea of conserving plenty of fishes within the system. I’ve fought, often behind the scenes, to do just that. I’m for the fish.

The captain appears to be "culling" in the video, an illegal practice that results in…

At the same time, I see most states allowing commercial fishermen to keep tons of, in this case, stripers/rockfish. Why shouldn’t the recreational sector also be afforded the same take-home rights – without taking heat from their brethren in angling?

I go fully neutral when having faith that fishery management just might be onto something by using science to decide limits.

Sure, I repeatedly hear that fishery management doesn’t know what the hell they’re doing and should be gotten rid of. And what would that leave but fishermen on both the commercial and recreational side wiping out every fishery in sight -- all in the name of being able to manage fish stocks from a strictly anecdotal angle. I’ll even put it in plainer English: Left to our own devices, we’d wipe out every fishery out there – and in the end, blame the others guys. I’ve seen it.

As to keeping striped bass, it’s all in the eyes of the bassholder. The laws state what you’re allowed to keep, while others forces hype the aesthetically preferable approach, emphasizing catch-and-release.

One thing I’ve seen over the years is a far greater tendency for northern folks to catch-and-release, while down-south folks heavily trend toward keep-and-eat. It’s simply regional preferences. The only out-of-control place I’ve seen is Florida, where you’re looked upon as insane if you needlessly release a fish. I once got into a physical confrontation over my releasing tinker blues near Port Canaveral. I won a short few-punch fight but was placed on an unpublished shit-list thereabout.  I soon quit fishing those testy rocks.

As to that north/south thing, I’m somewhere in the middle -- which would geographically place me smack-dab on Long Beach Island.

Below: Guess which person on this boat I would be. SMOKE TRAILS: Many environo-folks have sent me an update on the NJ bill that just cleared the Senate Health, Human Services and Senior Citizens, seeking to extend the provisions of the state Smoke Free Air Act.

Per a release “The legislation would ban cigarette, cigar, pipe, and electronic device smoking in any state park or forest, county or municipal park, or state or municipal beach.”

That’s another way of saying just about everywhere adjacent to ocean waters and bayside parks would be smoke-free.

I notice it also includes “electronic” devices, which I thought were a compromise, agreeable to those both for and against public smoking.

“The prohibition of smoking at public parks and beaches would better preserve the natural assets of this state by reducing litter and increasing fire safety in those areas, while lessening exposure to secondhand tobacco smoke among the public,” the bill states.

The bill would allow a municipality or county to set aside 15% of a park or beach for a smoking area. Somehow golf courses are exempted. I guess more doctors smoke than we realize.

The bill now heads to the full Senate. No word on the Gov’s thoughts.

Should someone get caught puffing on hallowed no-smoking grounds, he/she will be ordered to cease-and-snuff, by “a person having control of an indoor public place or workplace or a public park or beach.”

Should you not stop-and-snuff upon being ordered to do so, you’ll face a fine of not less than $250 for the first offense, $500 for the second offense and $1,000 for each subsequent offense.

This leads to the angling angle. Pet the letter of this law, it would be illegal to surfcast and smoke. Fat chance of enforcement there. However – and this is why I hate Jersey’s morbidly obese law books – someone can surely use the law against someone they’re trying to get even with.  “I’d like to report my ex, I mean, some man on the beach is illegally smoking.” It could also be another outlet for PDs to roust unfavored souls.

In this small nation, laws against reading and driving are strictly enforced.

I got this fish Sunday afternoon in lbi. Had 9 bass total with 3 large and a dozen blues to 8 pounds. Chauncey & John were #fishing #lbi today. No fish but they did find a feisty seal on second Street in ship bottom Why doesn't s*** like this happen when I'm watching soccer???

Below is a scene I've seen on LBI too many times to count, mainly Holgate -- but also near virtually every beach buggy ramp on the Island. 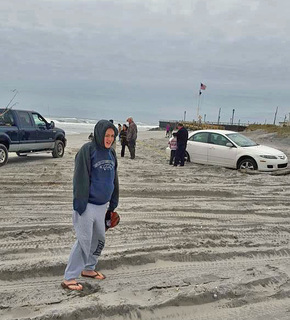 I would love to show fish pics on my page but this other stuff is just way to common in Brigantine NJ lately . Stupid is , as stupid does........ We can now add Mazda's to the list of "not sand friendly". If we keep up t this rate I heard the City is going to make so much money from fines that our taxes are going to go down next year .

(I can only dream of owning one of these beauties.) The Zebra is done and ready for its new home

Below: From Jersey Shore Hurricane News at http://jshn.org/

The Sea Girt and Axel Carlson reefs, situated 3.6 and 2 nautical miles off Sea Girt and Mantoloking, respectively, will each receive 930 cubic yards of concrete rubble from a seawall this month, according to a release from the New Jersey Division of Fish & Wildlife.

From the state release: Once the concrete is deployed it will serve as an attachment surface for mussels, barnacles, hydroids, anemones, stony coral and other invertebrates, which will quickly cover the structures with a living carpet, providing the base of a productive marine food chain. By summer, the new reef will be colonized by sea bass, tautog, scup, triggerfish and summer flounder. It will then become a favorite target of anglers coming out of the Manasquan Inlet.

The state, which holds permits for 13 artificial reefs in federal waters and two in state waters, encompassing 25 square miles of ocean floor, funds the program through excise taxes on recreational fishing gear and motor boat fuel.

Providing a habitat for a variety of marine organisms to grow along with food and habitat for fish and shellfish, the reefs are made of rocks, concrete and steel, and old ships and barges 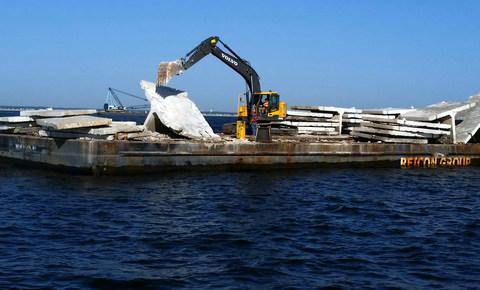 Nothing fancy needed - Single Hook ~ Bucktails - Rubber Jigs - Metal - Poppers Make for Safe Releases for the fish and your hands. Let's hear it for Mom!

"It was one of the first weekends I’d raced and somebody hit me in the back and ended up on top of me basically. The kart was sitting on my head and my mother was pretty freaked out by it. I’m like, ‘Mom, it’s okay. Don’t worry, I’m fine. Look at me.’ She was a mess. It was almost the end of my career, but luckily she let me keep going. She’s a great mom and I would love to call her from Kansas' victory lane with a special Mother’s Day present.”
-Martin Truex Jr. | READ MORE: http://ow.ly/4nnKRO ‪#‎MothersDay‬