The latest line in Chinese stylish hip waders has run into some unanticipated leakage problems ... 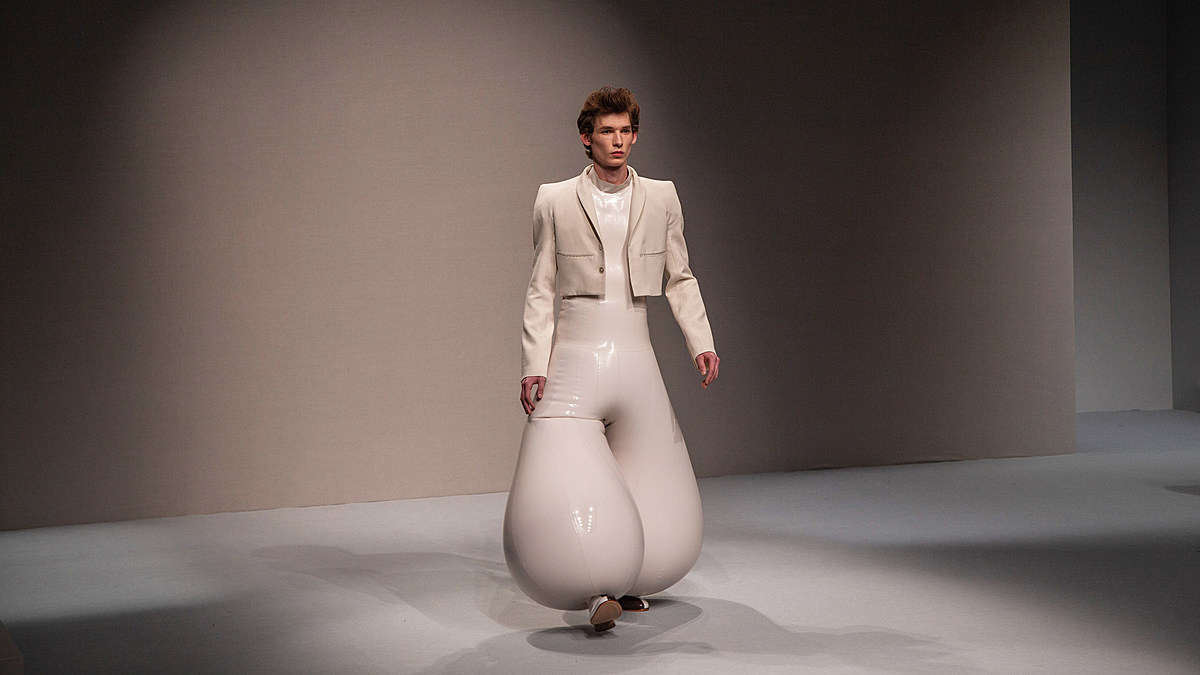 As the rush on masks and respirators reaches a COVID-19 frenzy, these are some of the last available products in many stores. (Methinks not everyone will get this.) 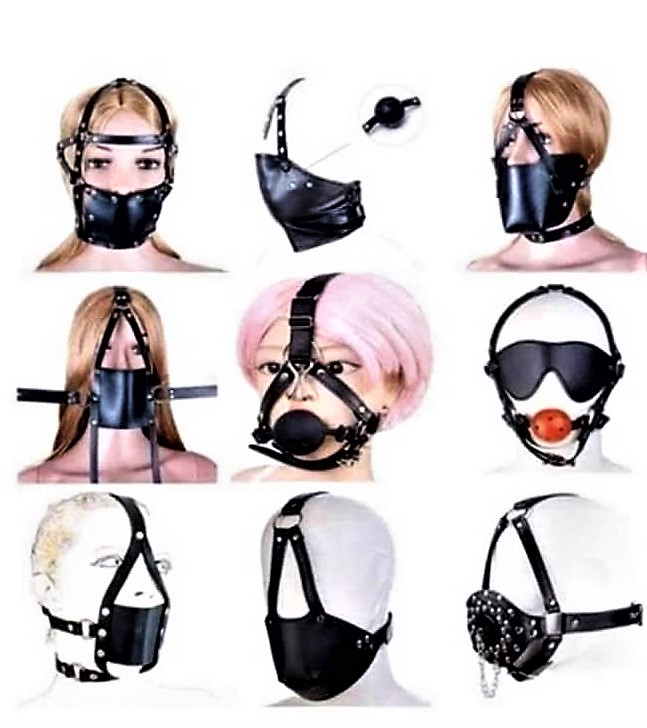 Tuesday, March 03, 2020: Ready for the big warm-up? Well, it won’t be a sweat-box out there but a steady inch-up toward above average, though there is a now a couple ripples set to move along the jet stream that could bring rainy if not chilly onshore conditions as we move toward record-breaking warmth later in the month.

A gal I know near the Great Lakes got 38 inches of snow in under 24 hours. "We had just been talking about never seeing a winter with so little snow. The fast melt-off is going to be hell, though." That's a good caution point to keep in mind for river dwellers downstream of those amazing lake-effect snows.

You've likely seen these recent Great Lakes late-winter shots but they're worth another gaspable gander: 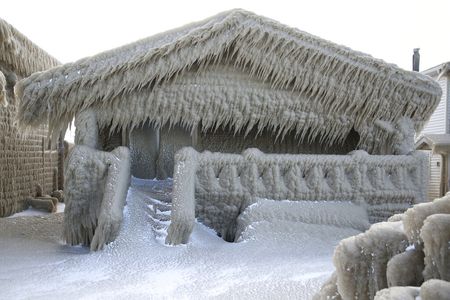 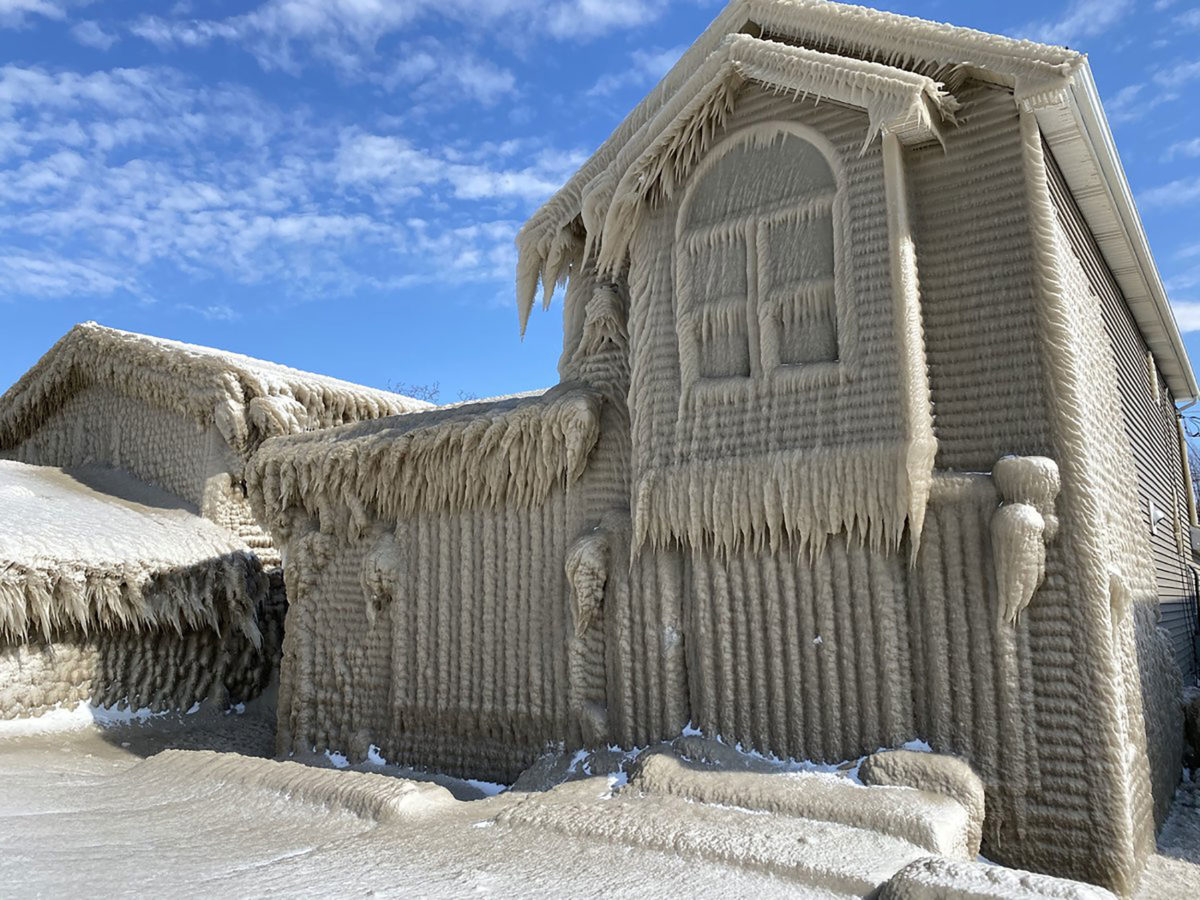 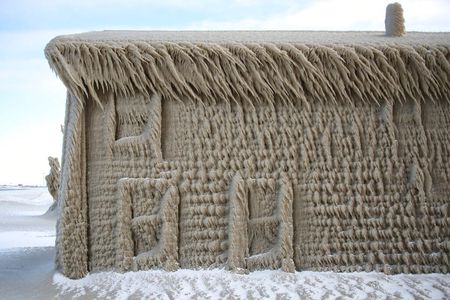 TRUE GRIT … FROM BAY TO BEACH: There’s a new beach replenishment angle playing out in Holgate, one that many folks have long suggested. Long Beach Township has gotten the go-ahead from the NJDEP to translocate (my word) 7,000 cubic feet of bayside sand from off bayside Pershing Avenue to an area known as Beach 3, eastward of Pershing. The material -- 325 truckloads – has been dubbed “quite clean.” As to the bay material being “clean,” there is a state standard that it must be comprised of 90 percent sand to be deemed such – and usable for beach fixes.

Efforts have long been made to transfer sand from shoaling bay areas to nearby eroding beachlines. This current transfer effort could lead to a replenishment trend that might be heavily applied to Holgate, along with many other areas of the state. Mariners have touted the effectiveness of using the sand from constantly shoaling bayside channels to fix eroded beaches, a win-win in their minds. However, this Holgate venture is further into the bay than any previous bay-to-beach replenishment project in NJ. The bay bottom can always harbor some mighty nasty stuff.

Long ago, I explored the bay “dredge spoils” used to build up the south side of Bonnet Island, the current Forsythe Refuge zone. Those spoils stunk of bay mud. They also had tons of sharp shells fragments and some decayed vegetation. It was far from beach fill quality, which was fine by me. I metal detected pounds of lead fishing sinkers, even digging up some lost-overboard silver coins, going back as far as the 1920s. I also found an Indian penny dated (barely legible) 1889. The reason those goodies made the journey from bay to land was the lack of any filtering of the spoils. The use of Little Egg Harbor sand in Holgate will likely require screening to weed out larger shells, not to mention many still-lived-in shells, like bivalves, mollusks and hermit crabs.

Déjà DEER ALL OVER AGAIN: I had reported that an SUV hit a deer on the Parkway – and burst into flames … the SUV that is. The deer? He wasn’t bursting into much of anything, short of the bright-light opening into deer afterlife. It lay in the roadway leading to some dangerous swerving of vehicles. I'm told the deer wasn't totally dead so there was no running out and pulling it onto the shoulder by its legs. Grabbing a thought-dead deer can itself prove fatal when the kicking commence ... toward one's head. Hunter fatalities have been reported when hunters aren't cautious around shot deer.

I had no sooner brought up the Parkway incident than I found myself being chastised by aggressive folks saying that flaming SUV v. Deer accident actually took place last year on the Pennsy Turnpike -- and to get my facts straight. Since I always take corrections very well (My ass I do!) I did some retaliatory research and came up with a truly eye-opening coincidence – if not more.

In fact, simply check out these two headlines:

It's almost too freaky to develop a theory over.

Per the Cat Country report: “This morning at around 9:30 AM on the Garden State Parkway, a vehicle struck a deer and caught fire. The incident occurred in Stafford Township just south of exit 63A on the southbound side. The vehicle moved to the right shoulder of the road, while the deer's remains stayed in the middle lane impeding traffic.”

I hope to have some time to do my due journalistic diligence and determine if the same type/year/model SUV was involved in both accidents. That could surely lead to a recall, especially in Deer Country. 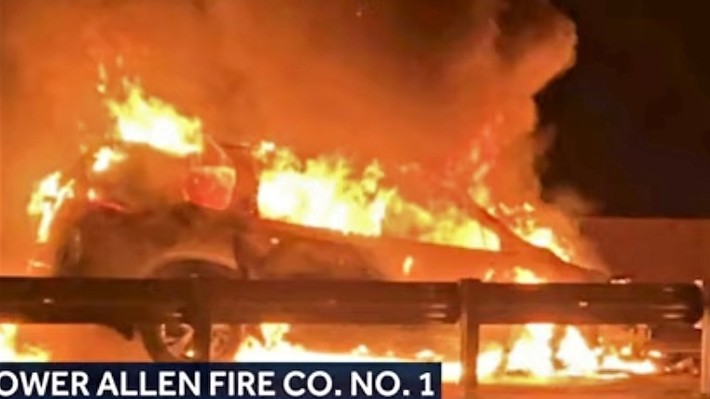 CPO’s Robert Henderson, Cody Meyer and Det. Ryan Harp assisted the CRO (Central Region Officers) and responded to Island Beach State Park for a report of waterfowl hunters shooting loons. The hunters were interviewed, and three loon carcasses were collected. The loon carcasses were transported to the pathology lab and examined by Dr. Nicole Lewis. A necropsy conducted by Dr. Lewis revealed that the loons were not shot but died as a result of internal hemorrhaging likely due to disease. Concerned that a disease could be spreading amongst the loon population in Barnegat Bay, CPO’s kept a watchful eye for any additional waterfowl carcasses. Thankfully no additional waterfowl carcasses were discovered.

CPO Dan Faith and Lt. Zane Batten were conducting a patrol in the Collings Lakes section of Buena Vista Twp., Atlantic County. CPO Faith observed a vehicle exiting a WMA during the hours of darkness. A field inspection ensued, and the operator of the motor vehicle was observed to be dressed in full camouflage. CPO Faith asked the operator if he was hunting and he replied “yes”. CPO Faith ask to see the operators hunting license. The hunter advised that he didn't have a license and hasn't bought one since the early 80's because he was protesting the license increase. The hunter’s shotgun was found to be loaded and uncased in the back seat of the vehicle. Three summonses were issued to the hunter: no license, loaded firearm in a motor vehicle, and hunt after legal hours.

On January 7th, 2020 CPO Ed Klitz, assisted by Lt. Brian Scott, inspected a Brielle-based commercial lobster vessel as it returned to port. After a thorough inspection, the CPOs discovered a cooler containing five tautog and a tote containing a very large American lobster. A review of the vessel’s permits indicated the vessel was not permitted to land tautog, and a closer look at the large lobster revealed that it was not only carrying eggs but also measured larger than the state legal size limit of 5 ¼ inches. Summonses were issued for the violations, and the case is scheduled to be heard in court in February.

Well winter isn't officially over yet, but we have posted our 2020 schedule online at www.missbarnegatlight.com . We have been working on some projects to keep her in tip top shape and will be heading to the yard in April to do the annual haul out and spruce up the hull.

We will start Memorial Day weekend with fluke and sea bass trips. Trips will sail Friday, Saturday and Sunday until June 19th, when we will start sailing daily.

Sunset cruises will be be every Saturday night from Memorial Day weekend through June 19th, when we will sail every night.

The "Happy Hour Cruises" will sail 530 to 630 PM every afternoon starting July 3rd. We will have nightly drink specials to start off your relaxing evening.

Ecotours back for 2020 sailing every Tuesday and Thursday in July and August. Join us for some hands-on education and fun on our local waters.

Canyon trips will start September 19th. Leaving at 8 AM and returning the next afternoon. These trips are every weekend through October.

Striped Bass will be every Friday, Saturday and Sunday starting November 6th.

URGENT NEED! We are in immediate need of Surgical face masks -" Face Shield, Color-White or Blue, Disposable, Material-Non Woven, Length-7 In., Width-3-3/4 In., For Use With Infection Control, FDA Compliant" for our seal caretakers. Seals do sneeze on us a lot when we are caring for them, and we need to protect our staff and volunteers. There is a shortage of these masks in all medical supply stores and sites. If you have any dust or surgical masks to donate, please call our office- 609-266-0538. Thanks! THE ONES WE NEED ARE ON OUR AMAZON WISH LIST

Great Bay EMS was dispatched earlier this afternoon to a residence in Mystic Islands for a reported structure fire. Firefighters assisted the homeowner who was complaining of shortness of breath from smoke inhalation. They then reported that they had 2 cats not breathing. Great Bay rolled 3 ambulances. First due took the respiratory patient. Second due performed CPR on the 2 cats using pet masks graciously donated. The third ambulance settup fire rehab. The respiratory patient was transported to Southern Ocean Medical Center. 1 of the 2 initial cats was successfully resuscitated. 11 more cats we're rescued by multiple fire agencies and given oxygen by our crews. Southern Ocean Animal Hospital responded with multiple personnel and a physician to help treat and ultimately take the cats. This was a unique scene and took alot of manpower to handle. Thank you to all agencies involved!

If I were to kiss a fish, it would be a winter flounder. Unfortunately, due to a host of reasons, including increases in water temperatures, we can kiss these once plentiful fish goodbye.

The National Hurricane Center has the lists of names for the 2020 through the 2024 seasons.