Tuesday, March 01, 2016: It’s worth repeating that the Weather Service starts spring on March 1, ending on June 1. Whatever the official season, winds always seem to abound from now through May. The blowing will be all too obvious this week, with gales – some containing snowflakes. Even though the forecast also shows lighter south winds later in the week, don’t believe it if you’re on LBI. It’s simply windier in these parts.

As to those snowflakes, I had mentioned them last week, after looking at a couple less-likely computerized forecast map projections – but knowing how things play out here this time of year. I was a bit surprised to see systems play out as expected. We’ll see the blow and not the snow. Those of you mainlandishly located might see some grass coverage. I likely don’t have to tell all ya’ll that the NJ Forest Fire Service, a goodly number of them I know, are doing their prescribed burns until roughly March 21. The state can extend the burn window into April if not enough underbrush can be scorched. The usual bugaboo is just what we’ll soon be getting: wind and rain … and snow. There is always a bit of head-butting between naturalists and the state when it comes to controlled burns. I’m on the fence. I realize they’re almost totally for the people and by the people … animals can take a hike. However, I also saw the horrific destruction of wildlife in the smoky wake of the Warren Grove Gunnery Range Fire. Near Pinewood Estates, I literally lost count of the dead box turtles – all of them in the black, so to speak. Hell, I never knew there were that many box turtles out there. I also counted five dead large snakes, including three threatened pine snakes. I found three small snakes: two ribbon snakes (surprisingly, near the water they frequent) and a smooth green snake. An awful loss. Unlike states to our warmer south, we really don’t have herptiles like we should. Yes, I’m a herpetologist of the highest order. 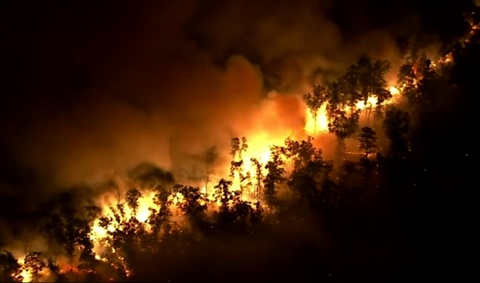 That said, I want the Forest Fire Service to get their burning done before the first wood frogs come out … by month’s end. Extensions bug me. 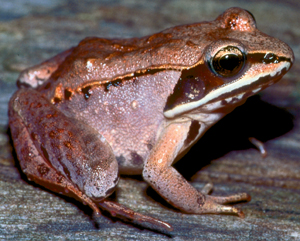 Trevor Daniels called me from the Mullica, and at the time I hadn't weighed in a fish so he texted me the first picture and headed in. He headed in, but there was sort of a race going on and Mathew beat Trevor thru the door by about fifteen minutes. In the end everyone came up happy, since Trevor's Mullica Monster pushed the scale almost to 24# and got a second Gift Certificate for over 20 pounds. That is a great fish and a great effort to get out and catch it.

I do believe that this is the best March 1st catch I ever heard of and if this size Bass is moving and feeding in the Mouth of the Mullica, it won't be long before we see one come out of Graveling point. I'm still looking for #2 and #3 as well as prizes for the first woman angler and the first Boy and Girl to make a catch. I won't be surprised to see more pictures and hand out more prizes today.

To everyone out there, I really want to congratulate Trevor and Mathew on a pair of great catches, and yes I realize that two Striped Bass were killed today, but Opening Day is what everyone is waiting for and would it really be Opening Day if all Striper Fishing was Catch and Release. I don't know how soon I'll get a chance to get on the water, but when I do I will be fishing for the chance to have earned a good dinner as well as the excitement of the chase. So if you do have an axe to grind take it up with those who break the fisheries laws and if you do not agree with them the public meeting for the New Jersey Marine Fisheries Council will be at the Galloway Library next Thursday March 3rd at 4 pm. Be there and voice your opinions or at the very least see the process which our regulations are made.

I'll Be There. And once again, Congratulations.

BRING OUT YOUR OLD: Dust off your fishing past – folks wanna see it.

The NJ Maritime Museum in Beach Haven Maritime Museum is poised to set up a surf fishing display. Seeing it’s a museum and all, the display needs to be filled with smells-like-old-stuff stuff. That’s where you step in. No, not because of your oldness odor but because of those olden things you might own.

As I see it, owners Deb and Jim are looking for items that all but ooze the area’s surfcasting past. Not to worry, the items would be there on a loaner basis. In the case of paperwork, it could simply be photocopied.

To kick things off, the museum already has a couple brass sand spikes. That rules out my many-dozens-or-so vintage brass sand spike collection. Of course, there is the one that’s engraved “Property of Zane Grey.” I’m just not sure where I put that dumb thing. Oh, well.

A focal point of the display will Van Campen Heilner's book, “The Call of the Surf,” which refers to LBI surf fishing "back in the day." Know of any other rare books that host words about fishing the LBI suds, as in way back?

As to what goes into a Jersey-ish surfcasting display, I see plugs as one eye-catching section. We’re all familiar with Bob Pond artificials; maybe not by name but his 1945 Atom Manufacturing Company’s wooden swimming lures are legendary. I enjoy  the way-back J. & H. Tackle Company, founded by John Gamsby and Howard Ladig in 1947.

Then there’s plug-making artistry of the Surf Tackle Company of NYC. 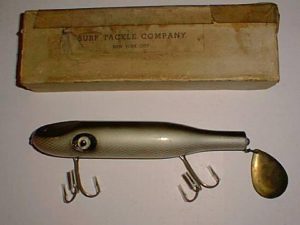 Of course. What would an olden display be without an original Stan Gibbs 1947 “Cast-a-Lure” prototypes. 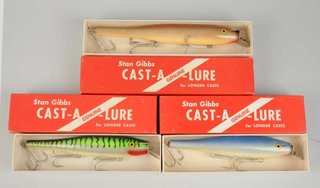 You get the plug idea. The more they’re attached to some LBI usage/history, the better they look.

Fanning out, a surfcasting display would come alive with paperwork and images that date back to who-knows-when.

I’m already looking for old newspaper clippings. Hopefully, reporters wrote of LBI surfcasting all the way back in the 1800s.

I'll see if Deb is interested in my exceedingly rare issues of the "Long Beach Island Derby News." 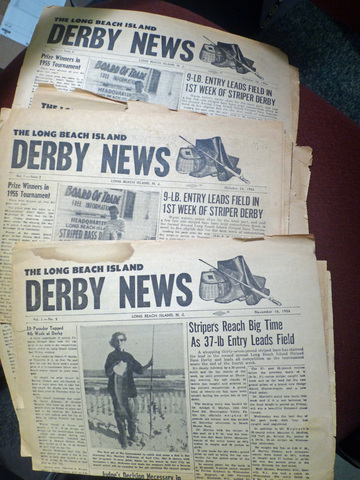 Photographs should abound. In fact, it’ll come down to which pics tell a story -- and then some. It is often the things in the background … or an accompanying family story ... that sets a photo above the rest.

Minutia from the early years of the Striped Bass Derby must make an appearance. I’ve heard that an angler or two have buttons and forms going back, nonstop, to the tourney’s beginnings. If anyone has all the derby/classic window decals on a buggy, I’ll help remove the entire window. I’ll also supply the Saran Wrap for the vacated window opening. 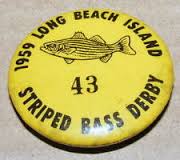 Below: A. Warner's 48-pound, 3-ounce striped bass caught in the 1963 Long Beach Island Surf Fishing Classic, then known as the Striped Bass Derby. 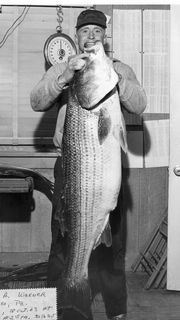 Rods and reels can be real historic, Island-wise. However, rods in great numbers might be a tad too space intensive, though how can there not be an LBI slit bamboo surf rod in the museum mix? Old bait-casting reels, with bakelite side plates and reel nobs, are small and offer a great throwback look. A photo of grandpap surfishing in Ship Bottom with a museum-displayed reel brings things to life. 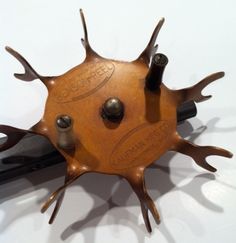 For me, anything Holgate-ish rocks. Surf Fishing thereabouts dates back to Tucker’s Island times, when Bond’s Beach was a mecca for fishing folks throughout the tri-state area. Much of the Island’s south end lands, purchased by the James Holgate family, were truly the land of surf fishing.

The mossy oak Roberts ranger. For when your sick of catching fish