When you finally get those email-ordered sheets with a "Rose Bloom" design ... 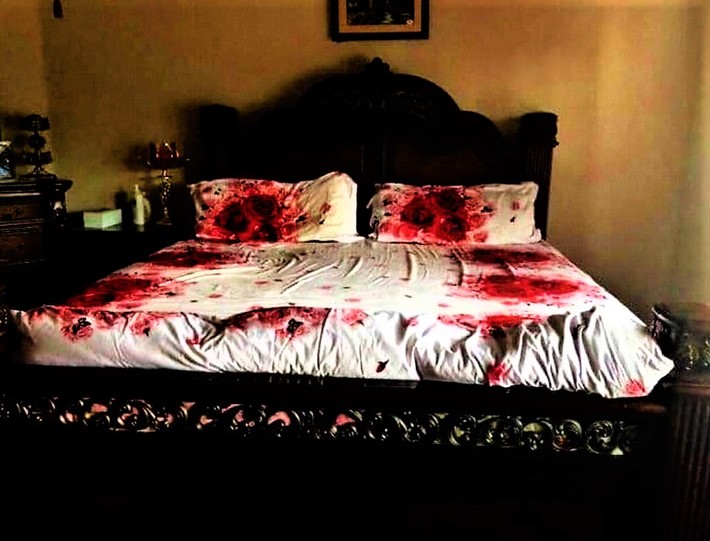 Winds should remain kindly enough to allow for loads of fluking activity -- and runs to the seemingly well-endowed canyons. When I get tuna steaks left off at my house you know the foreshore fishing is excessively decent, hosting footballs.

Thanks for the numerous shark catch reports. More insiders saying the water's fine -- get on in, so to speak.

I have to think that the steep near-beach drop-offs in water depths, caused by replenished beachlines, might be why we have so many gray suits in so close. Why-ever, I stand by my conviction that sharking is a viable summer sportfishing attraction, now that so many species have been taken off the table. Not that you can eat – or keep -- most of the species caught in close but those surfcasters catching the big brutes are leaving the beach quite pleased … albeit meatless.

I must mention that a few finicky folks feel the fight of surf sharks is mainly a tug of war, as opposed to the headbanging feel of big blues and some stripers. One fellow noted that a large ray gave him one of the better fights he’s ever had on light gear. “It was a lot more fight than some of the sharks,” he said, though he is a huge proponent of night fishing sharks. “ I haven’t broken the seven-foot (length) barrier yet … but I will.”

I’m getting odd feedback about the huge sand tiger taken in Beach Haven, mainly regarding the inconsiderate nearby crowd – ignoring a fully flustered lifeguard trying to hold people back for their own safety. 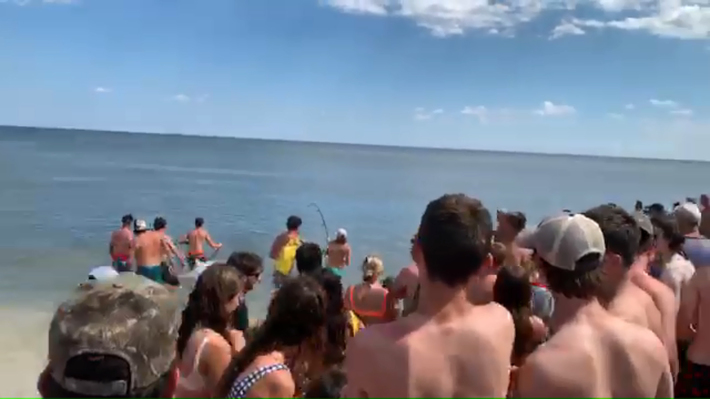 There has also been much mention of the fellow standing in knee-deep water at the business end of the big highly upset shark. One emailer: “Had that been a great white, he’d have been a (expletive) piece of bloody meat,” wrote a charter captain. 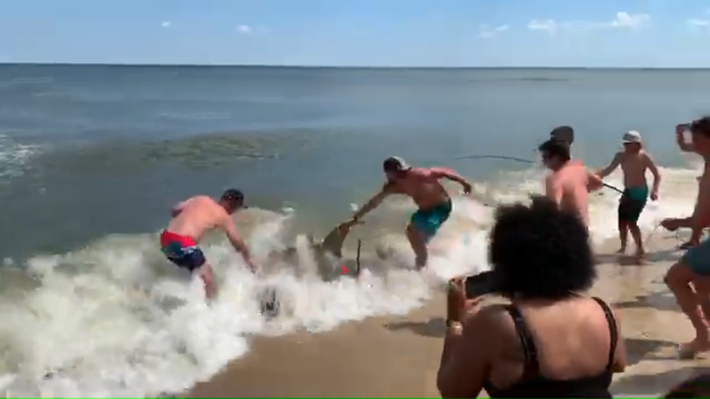 I have seen tell of many hooked and aggressive-by-nature sharks taking potshot bites at anything they can get their panicked jaws around. Sand tigers, being among the mildest-mannered of gray suits, are not so inclined. Had this one been so inclined ... ?

In my last blog – and herein included -- I showed a photo of an ugly foot injury from a quite-small “biter” bull shark. Imagine a similar clampdown from a six-foot biting breed of shark. It could easily prove fatal if the likes of the femoral artery is severed; within minutes, a person will bleed out even with professional pressure being applied. ER’s often can’t reattach a femoral artery before bleed-out.

Yes, I’m using scare tactics but since I’m kinda encouraging sharking I need to add bloody reality to landings and unhooking creature that can sever an artery if not an appendage.

And, yes, there is a possibility --  make that a likelihood -- of a easily PO'ed great white being surf caught. A bull shark is even worse.

While this is Florida, we could easily see a white. This photo sorta shows the "white" angle of the name. 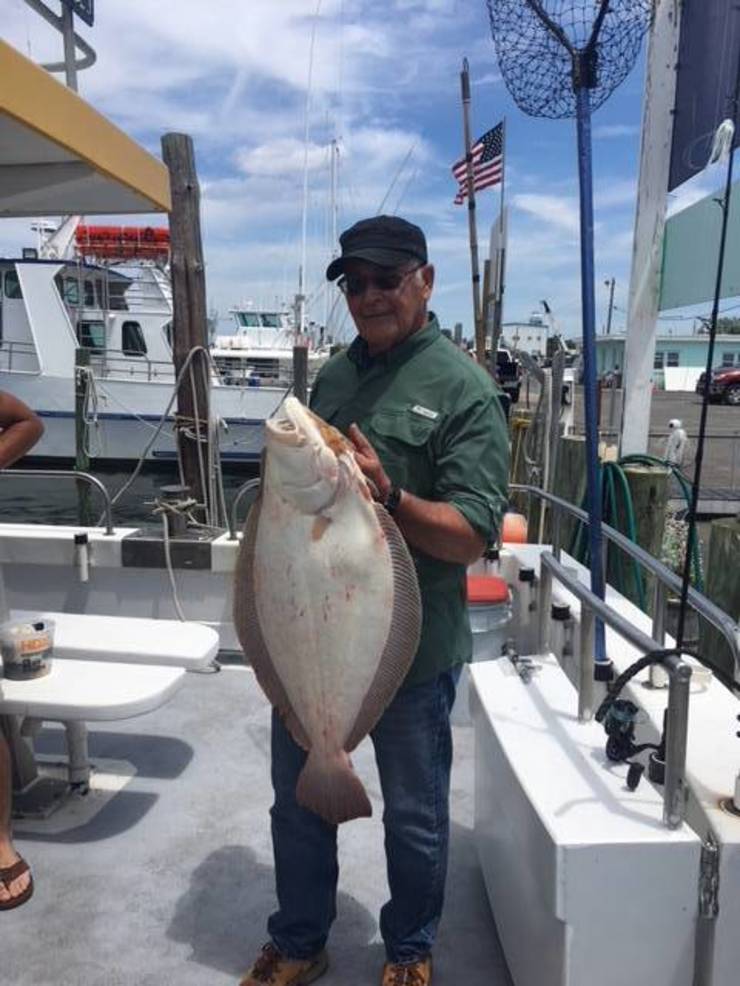 LONG BEACH ISLAND REGION - Perhaps the premier fishing event of all of New Jersey is fast approaching as the captain’s meeting for the Beach Haven Marlin and Tuna Club’s 50th Annual White Marlin Invitational will be held on Tuesday, July 23.

The WMIT runs until Saturday, July 27. Captains get to pick 2 of 4 days to fish from Wednesday the 24th through Saturday the 27th.  There are already over 20 boats pre-registered so this looks like a good year for the event.
Sign Up for E-News

Registration forms can be found on the website, www.TheWMIT.com. Questions can be e-mailed to wmit@bhmtc.com, or you can call Dave at (908) 963-5924

Not only is this the 50th year for the WMIT, but it is an Offshore World Championship qualifying event. It is also partnered with “Parker’s Army,” a worthwhile local charity whose mission is to raise funds to provide scholarships to high school student athletes, help fund area youth recreational programs, and donate to help in the fight to cure childhood cancer.

With the black sea bass season now closed for a while, our local head boats have turned to fluke.

The action has been improving for the “Miss Beach Haven” out of Beach Haven captained by Frank Camarda. Mate Max Rosenthal tells me that Mike boated the first limit of keeper fluke of the season. A look at a recent day’s catch includes keepers up to 4.2-pounds along with tons of dogfish, black sea bass, sea robins, and even a few weakfish. The big excitement was a 20-pound class cownose ray. On Thursday, June 27, a 5.25-pound fluke ruled the roost to go with a steady bite all morning long.

I got word from the “Carolyn Ann III” out of Barnegat Light that Hal Frommelt of Bayville landed their first doormat fluke. Beauty of a fish tipped the scales at 9.1-pound

The latest report from the Beach Haven Charter Fishing Association indicates that Captain Gary Dugan on the “Irish Jig” found nonstop action at one of the local reefs. A recent trip resulted in 6 nice fluke and 3 snapper blues for dinner along with many fluke just under the 18-inch limit. Captain John Lewis on the “Insatiable” has been finding action with short fluke, sand sharks, and small sea robins.

Captain Brett Taylor of “Reel Reaction Sportfishing” had a bay fluke trip and despite wind against tide boated close to 30 fluke including three keepers to 4.5-pounds. On another morning trip Captain Brett started in the inlet without much success and moved to the bay waters for 25 fluke to 6-pounds. His afternoon trip that same day produced over 40 fluke with four keepers. The S&S bucktail jig and custom teaser tipped with fresh baits worked the best.

Fisherman’s Headquarters in Ship Bottom reports the surf fishing on LBI is strong with good fluke action along with some nice kingfish. In addition, they are hearing of some exciting matchups with big rays and sharks.

Fish Heads adds that this is prime time fishing and the canyons are producing tuna, sharks, marlin, mahi, tilefish. They are getting more reports daily and it only seems to get better. Recently the big eye have made a strong showing and the yellowfin tuna bite for most boats has been steady.

Comments, questions, and fishing reports are welcome at www.jamesghutch1@aol.com

South Breeze in Beach Haven today. We had 2 great trips today, with Mario winning the pool in the morning with a 21 inch fluke, and Keith had the big one of the afternoon. Hoping tomorrow brings more lovely weather and anglers who would like to boat some fish! Questions? Give us a call! Hope to see you tomorrow

This mornings trip started out slow but ended up pretty good. The drift straightened out and the fluke started to bite.

Further Jax update: (3:30 pm, July 2) Those (Stafford Animal Control) trying to humanely rescue the likely exasperated pooch are again asking -- with a little more emphasis -- that everyone steer clear of the currently coned-off area of the refuge trails. Alarmingly, there are some interlopers getting too dang close to the action. Get this: Trail cams have captured the images of non animal control folks coming right up to the established food and water zone. That's real bad. Sundry people-scents left behind could convince Jax his retreat is becoming overpopulated with humans. The last thing Jax supporters should want to see is his moving off to who-knows-where.

Distantly related to the Jax tale: There is now a contiguous terrapin crossing-prevention fence along the entire north parameter of the Forsythe Cedar Bonnet Environmental Trail property (at Rte. 72) -- except at the roadway going into the refuge area. The low-slung fencing is surely enough to deter Cuaseway-crossing terrapins -- known to be poor jumpers and lousy fence climbers -- and might even act to mildly discourage a northward jaunt by Jax. Nice work, NJDOT. 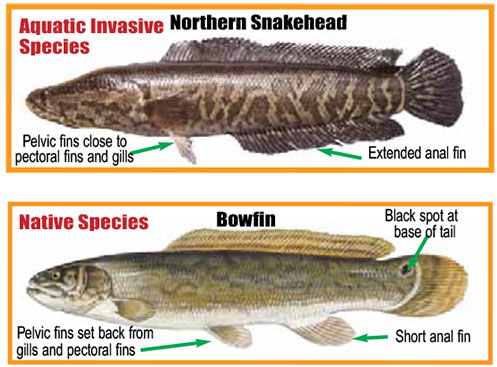