Tuesday, February 16, 2021: The historical march of winter storms toward our general area will not abate for at least another week 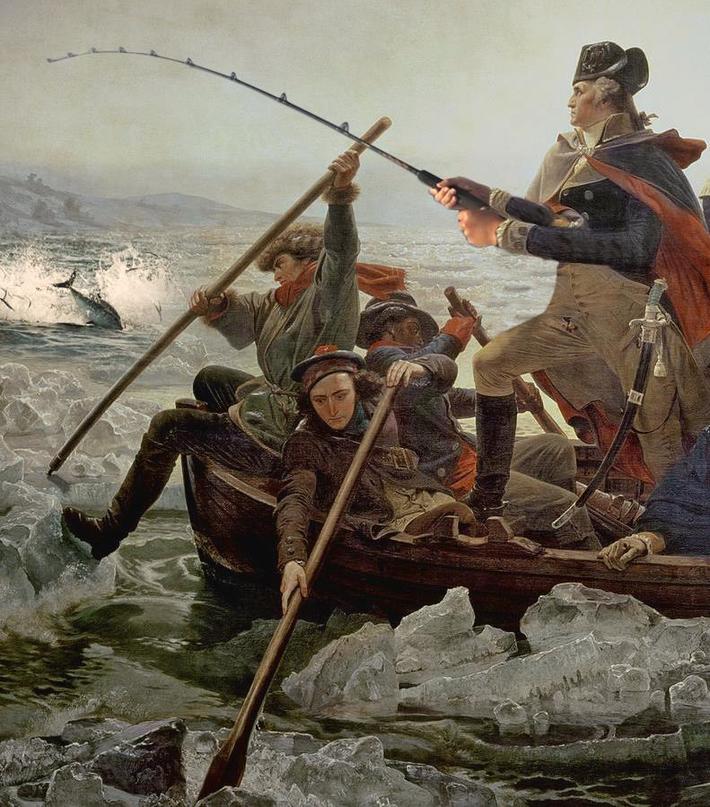 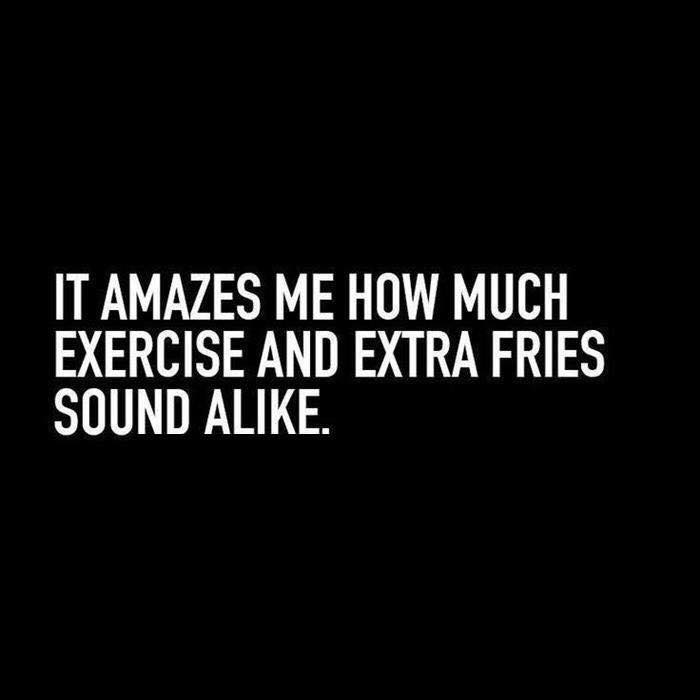 MUCHO THANKS-O: There's been a ton of well-deserved recognition being given folks who work behind the scenes and those so far on the frontlines they're also rarely seen. Thusly, a shout-out to the plow and salt folks who kept one of the worst ice storms in years off the roads, so to speak. Had they not worked meticulously throughout the night nobody would have been on the roads -- in the ditches, for sure, but not on the roads. And we might need them again in short order. 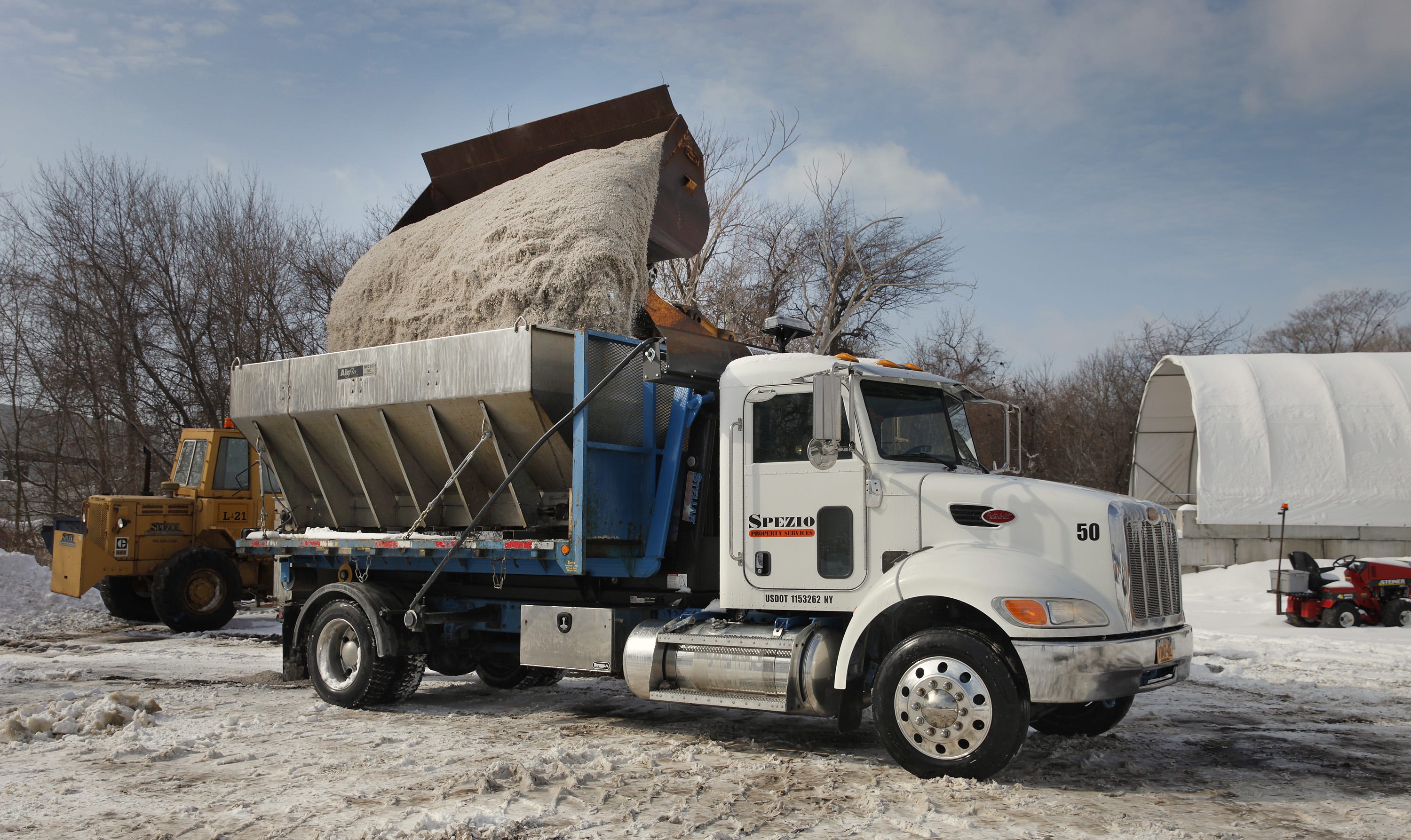 Tuesday, February 16, 2021: The historical march of winter storms toward our general area will not abate for at least another week. We’re on the lucky side of the 95 corridor when it comes to snowfalls, though our beaches are reeling from repeated northeast blows.

The Army Corps of Engineers did not consider the nor’easter to be a catastrophic event and won’t provide immediate assistance.

I know I’m repeating myself but erosion from northeast blows fill in very quickly, even to the point of accruing more sand than prior to the blow. That rapid return does not apply to morbidly eroded areas, like Holgate proper. Something will likely be done there by this spring, if only a mechanical push-about or even the trucking in of some quarry material. I hate the trucked in fill which is supposedly quick to “bleach out”

BLOG-OTE: For my weekly SandPaper column, I’m writing about the coyote trapping announced in Barnegat Light. 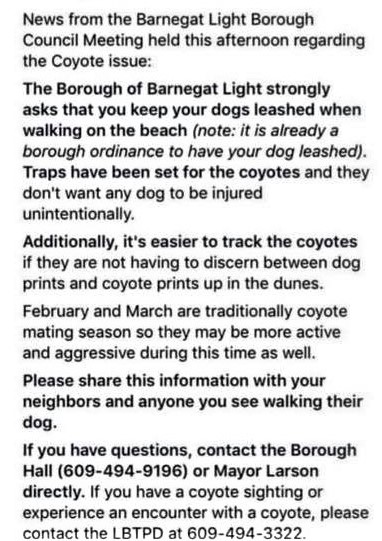 I’ve been abreast of the Island coyote presence since their initial arrival. In fact, I’ve very much enjoyed the almost constant flow of info on the ongoing whereabouts of Island coyotes.

I’m not at all surprised over BL Mayor Larsen’s announcement that the borough has hired a trapper for two weeks, beginning already. Coyote complaints, some frivolous, have tsunamied through town hall.

My desk has entertained many a call dripping venom over the hassles, both perceived and actual, regarding the wild canines of the north end. There have even been alleged attacks on domestic pets. I can’t count the number of “I could feel them watching me” comments.

As I thoroughly note in my column, cat people are the most miffed by coyotes in the 'hood, though owners of smaller dogs, needing to cringe at every bush sound while walking their charges, have grabbed my managing editor ear – and held it, sometimes for lengthy stretches.

While it might seem I’m a flagrant coyote hugger, I’m simply a wildlife appreciator by nature, though I’ll take coyotes over feral cats all day long.

In the same instant, I’m in compassionate lockstep with folks who feel their pets are members of their families easily equal to any two-leggers. 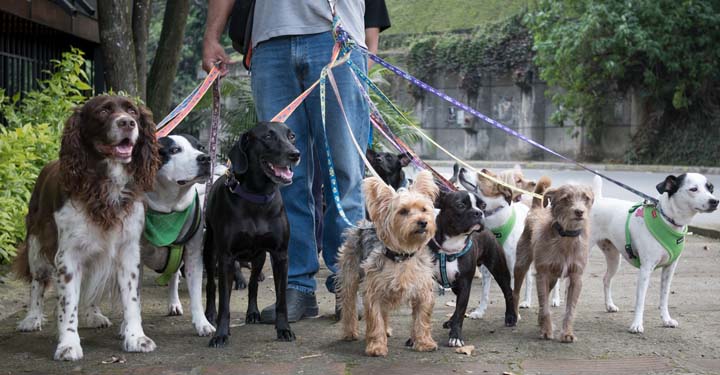 That intrusion of coyotes into the daily life of many Island pet owners does not create a conflict for me, only a sense that coexistence should prevail, which is also the mantra of all humane groups.

Entering into the coyote debate are bird people, as powerful a block of wildlifers as walks the great outdoors. Their hostility toward both outdoor roaming house cats and feral felines is unmistakable. They have the dead-bird data to back them. Loose cats kill astronomical numbers of birds. For that reason, avian appreciators have seen the coyote light, knowing the wild canids will help reduce what is seen as the greatest single animal threat to birds. You don’t want a concurrent gathering of the Cat Lovers Association and the Bird Adorers Group in the same building. 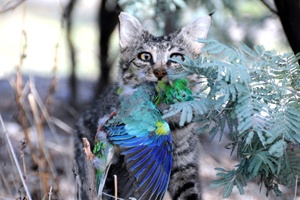 As noted, I’m more objective regarding coyotes than my writing might suggest. I even somewhat understand the attachment folks have with feeding feral cats. Where I part ways with feralists is their inexplicable unwillingness to have their non-pets get some of their own free-range medicine.

My weekly SP offering explains: “No surprise, the news of coyote clearing on LBI is being best received by nervous cat owners and, more so, feral cat aficionados. The latter group is an odd paradox, radiating a belief that feral cats are throwbacks to primitive feline times. “They’re out there free roaming, merely following their inherited instincts, stalking wildlife for sustenance,” I’ve been told. Makes a tad of sense, until …

Incongruously, once actual wildlife enters into it, like coyotes legitimately following their far better-established wild creature ways by feasting upon those alleged back-to-nature felines, feral catists cry for those barbaric predators to be trapped and dispatched. Wait, you lost me there. Cats gone wild … yes. Wildlife gone wild … call in the Marines. Hmmm.

Feral cat folks are often OK with having their non pets trapped, neutered and released. They’re not so compassionate about wild canines.

Even if there is a successful coyote dispatching effort by BL’s hired gun trapper, which will kill any caught coyote, intensive research indicates more yotes will quickly follow. In the words of the American Humane Society, “Research suggests that when aggressively controlled, coyotes can increase their reproductive rate by breeding at an earlier age and having larger litters, with a higher survival rate among the young. This allows coyote populations to quickly bounce back, even when as much as 70 percent of their numbers are removed.” The society urges, “Coyotes are here to stay—it's up to us to find ways of coexisting with them.”

Below: One of the geniuses wildlife is up against. 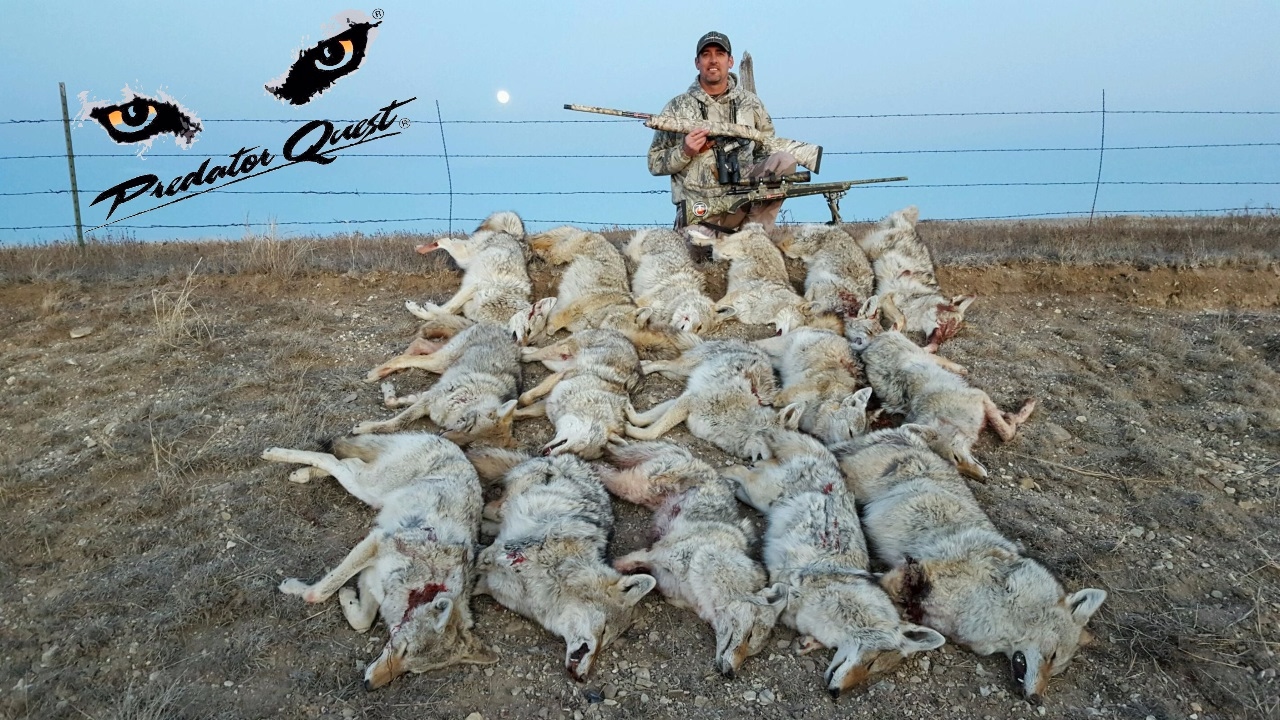 That begs the question of LBI maintaining an ongoing trapping effort, ad infinitum. It’s the old “Where will it end.” Things will soon get very critical down Holgate Forsythe Refuge way. There are not only coyote settled in there but quite likely a jumbo coywolf, or simply a regular coyote born with disproportionately large paws.

As a significant aside, last week I stopped to check out a roadkill female coyote on Route 72 Manahawkin. That was one skinny creature. It might indicate the holding capacity for coyotes in that area is being surpassed. How so? Forage becomes tougher and tougher to come by as superior coyotes grab the top territories. My guess is this coyote was hit while unadvisedly hanging around the highway looking for roadkill.

As I’ve written, coyote are very crafty road crossers, unless weak or throwing caution to the wind.

If coyote territories have filled to the gills on the mainland, the next step, literally, for territory-strapped mainland coyotes is bridging out to LBI. Such recruitment will easily compensate for any removals done via trapping.

As to the trapper, unnamed to date, he’ll be both snaring and photographing with trail cams. That suggest this is a much a snaring effort as coyote census taking. Animal control has said there are 11 coyotes on the Island. That’s a bit too exacting for my liking. Sufficed to say there’s more than a breadboxful.

I’m told our four-inch snowfall helped the trapper. That makes sense. His main chore is finding the paths most taken and setting up snares thereabouts. As you might eventually read in my weekly, snares are meant to strangle, once neck wrung. The problem is they can also snare other parts of the body, requiring (by law) a rapid dispatching by the trapper. On principal, I hate trappers with a bloody passion. However, many pest control folks who are often humane in their removals double as lethal interveners. I’ll even admit lethalness is occasionally called for but when it comes down to uppity homeowners wanting death-to-wildlife for merely being inconvenienced by indigenous creatures after moving into once-wild now developed areas … My ears are steaming even thinking about it.

In passing, my weekly column mentions foxes, of which LBI has surely a dozen or more. The snares now in use are set for their size heads. Obviously, the state park won’t mind some de-foxing to align with what is a highly admirable effort to encourage the nesting of shorebirds, some quite rare, around Lake Barnegat Light.

The obvious irony there is the fact that feral cats have marked the demise of many a chick. Not that foxes won’t grab a quick bite to eat at the expense of a plover. Coyotes, though, surely help the LBI bird nesting cause when the scales are evened out.

I have broken apart at least 50 separate coyote droppings – none from LBI -- and have never once found a bird feather. I’m not saying they never grab a flier, it’s simply not their thing. Yes, a coyote will absolutely take down a too-slow duck or such. It is happening in cities where park ponds are overflowing with quackers. Such takes by coyotes help the ecosystem by thinning out the quacker crappers.

Easily half of all mainland non-deer-influenced coyote droppings contain rodent hair, with hares a close second. Admittedly, when deer hair is present, it is not only overwhelmingly present but comprises the bulk of all the coyote feces in a given kill area – the carcasses most often coming about from roadkill. I have even done fecal backtracks to find the roadkill, usually dragged a goodly way from the highway.

In its simplest form, hazing is standing tall, firmly, and, if need be, noisily in the suspected presence of a coyote.

Per experts, a drive-off action is powerfully yelling, “Go away, coyote.” Maybe stamp a foot down as punctuation.

Keep in mind, coyotes are most often very cowardly in the presence of humans. Cougars on the other hand.

I threw that “cougar” angle in there for you cat folks to gloat over, sensing you’d love the notion of a big cat eating a canid. Nature can be cruel. Human nature? Don’t even go there. 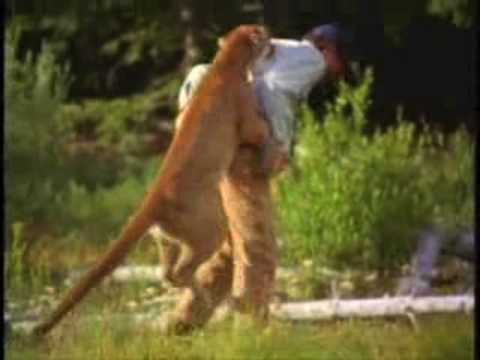 I’ll offer an improvement to the shout-away strategy of hazing coyotes through a simple touching up of the flung verbiage. Try using, “Go away, bear!” which tends to emerge from the lungs more forceful on concept alone. Such a bearish command will easily spook the fight clean out of a coyote, if only by vocal volume alone. It might even get a smarter ‘yote thinking, “Bear!? Oh, I’m outta here! It’s like I can’t even take a walk without worrying about being jumped by a bear!” There’s an irony, eh? 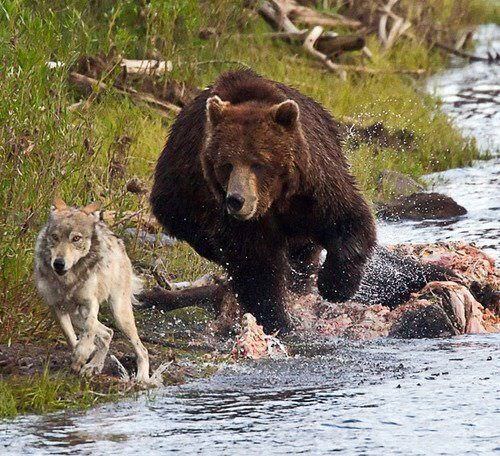 The Beach Have Marlin and Tuna Club, the home of the longest running white marlin tournament in the United States, has added a new tournament to its schedule of events.

The exciting addition is an all species tuna tournament and is scheduled for June 6-June12. Boat captains get to pick one of five days to fish. For the selected fish day boats can depart their inlet of choice any time after midnight and must weigh in at the club by 9pm..

Anglers can troll, chunk and / or Jig during the selected fish day..

Please join us for this exciting new tournament and given the fantastic early season tuna bite we have had for the past several years this is a great way to shake off cabin fever.

For additional information please refer to the tournament’s website “BHTunaOpen@bhmtc.com”, for registration, rules and calcuttas or call Bob Percopo at 732 996-8154 with any questions you may have

FOLKS WERE ASKING: The Division of Fish and Wildlife has passed on a statement from the Centers for Disease Control and Prevention assuring there is little if any chance of COVID-19 being contracted through wildlife.

“This is especially valuable for hunters, outdoor recreationists, or any member of the public who may interact or come in contact with wildlife,” offers the DFW.

This surely comes as a relief for underfunded Fish and Wildlife which would have been saddled with making sure any wildlife gathering of 25 or more were properly masked, with exceptions going out to ants, bees, wasps and, go figure, greenhead flies. Hey, if ever we would benefit from a tight masking it would be with greenheads.