This is exactly what can happen when things get boring in the office on rainy days ... Now who's going to clean this up? Tuesday, February 16, 2016: One of the surest ways to keep winter from leaving is to claim winter is over. But how can I not make such a proclamation when the maps and jet streams and wildlife and other things all point to not just milder weather arriving but even some freaky mild in the not-too-distant future. 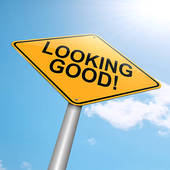 Personally, I thank my lucky rain stars that this rain has drenched deep-frozen ground. I’m geared for a slew of treasure hunting conditions about to arrive, though I didn’t need to lay off for very long due to freeze-out conditions.

Not that many folks are watching but the ocean is doing just fine. The latest storms have eaten the beaches here and there but nothing to alert the media over. It’s hard to believe but we’re quickly getting close to the dredge return time in Mid-March. Of course, if we’ve recently learned anything from Great Lakes its “We’ll believe it when we see it.” I have had a few emails asking if the Jonas damage was enough to require re-duning. Ask LBI town leaders and many will swear there was more than enough dune damage to require an emergency re-do or replenished dunes. I don’t think anyone can make viable claims that the beaches haven’t come back. Again, I’m talking about already replenished beaches.

I’ll alert that there are very strict criteria – based on computerized graphic overlays of the land – that must be met to trigger a full-blown rebuild response by the feds. At the same time, having the dredging and spraying equipment on-scene – as it should be into May – might spark some jerry-rig repairs, meaning the allotment of more money, via more begging by our DC senators and congressmen.

As expected, pipes are busting out all over, per police calls. However, I think we fared well, overall, though it’ll take until nonlocal property owners return for a look-see before the full pipe-break scope of damage is seen. 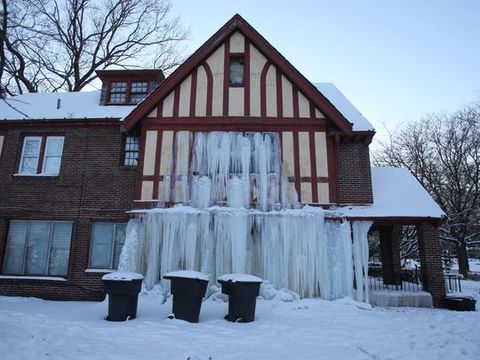 I was asked if anyone in this area offers lessons on making fishing plug. I think not, though it would be a night course I’d love to take. My only experience is hand-carving plugs from gorgeous, seasoned, blow-down cedar saplings collected near near Bass River. I know of only one small, forested area where the best-of-the-best, hardest-of-hardest cedar resides. No, all cedar is not all alike … by any stretch. The stuff I like is so hard it actually takes a high buff-polish, if keeping a plug natural. Anyway, if anyone knows of any plug-making classes, please let me know.

Old chair transformed into a couple plugs for the spring

FOXES, COONS AND POSSUMs … OH MY: I was reading about survivalist wildlife, which instinctively knows if you can’t get along in the face of humans you’re a dead duck. They’re sometime referred to as urban wildlife, though they’re closer to suburban wildlife.

Among the most humanified mammalian beasts are coyotes, bobcats, deer, opossums, raccoons, skunks, squirrels, rabbits, foxes, otters, and more rodents than you can shake a stick at. Cougar, bears and wolves are on the brink, living near, but not so much amid, the ubiquitous packs of humans. 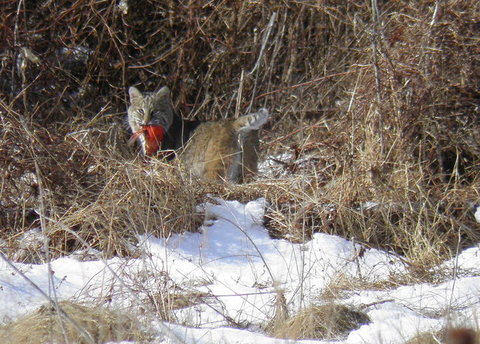 I related to that write-up via the slew of photos now showing foxes, often referred to a town foxes, eating out of the hands of humans. 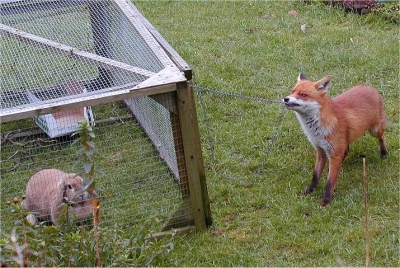 Along with wolves, foxes hale from the taxonomic family Canidae (canines). However, they’re not as closely related to our pooches as might be eexpected by their looks – and even their easily domesticized behavior.

While foxes have the canine look down pat, a slew of telltale physical traits place them in their assigned Vulpini (foxlike) tribe, as opposed to the Canini tribe, which contains wolves, at the DNA roots of our house pets. 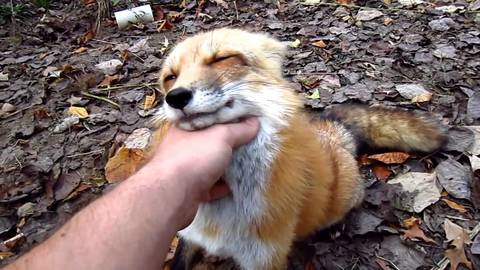 Admittedly, foxes raised by humans are a bit like dogs. A buddy of mine owns a female red fox and though shy of most folks she loves me. Still, when she snuggles up to me, offering her belly, there is something very rapid and, well, wildish even in her affectionate demeanor. She once excitedly nipped my hand and I realized she bares some seriously sharp, wildlife teeth. She is definitely not a dog.

In the wild, red foxes are fierce ... 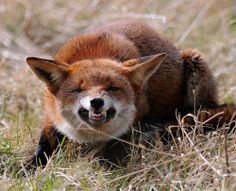 As to the seemingly growing pack of coastal foxes – LBI has way more than most people realize – they are hardly beloved by health department officials. They are a rabies threat – though, even more so, are bats. 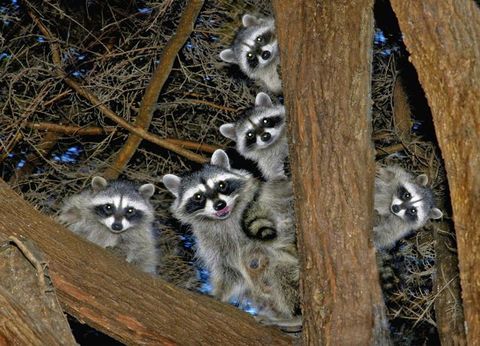 LBI is a prime example of man meets urban wildlife. Raccoons have gone gonzo on LBI, though animal controllers – the type you pay to de-vermin things – may have finally gotten the upper hand on an overflow of raccoons. Hopefully they got a “humane” upper hand.

No wildlife, even a coyote, messes with an angry raccoon. If you ever wonder why cats at a porch meal-bowl back down from coons ... 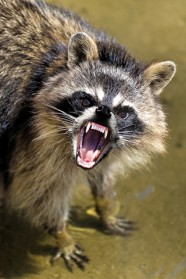 While last year’s bizarre irruption of raccoons was firstly blamed on a hard frozen bay during winter, I also heard theories they came drifting upon Sandy strewn flotsam. However, I give far more weight to their being forced to relocate from the odd reclamation effort on the southern end of Cedar Bonnet Island, work still be dramatically done as part of the new Causeway Project.

Yes, it is technically a reclamation. Supposedly, a very natural, sedge-like ecology and environment will reside there after all the heavy metal machinery has rearranged, a.k.a. reclaimed, the landscape.

Much of that sedge island was, indeed, put-upon by folks offing dredge spoils. I recall when it was a mud wasteland after those spoils were laid over the natural sedge meadows. At the time, I knew nothing about ecology so I thought all that spoils mud was a blast to play around with … in a treasure hunting vein. 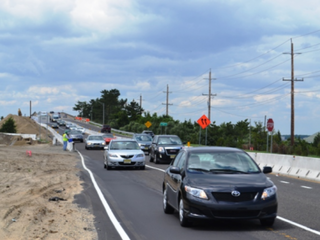 Why it's not a good idea to try the "Scary Snowman Prank" in New Jersey ...

"Time to buy fishing gear for spring ... Help me count."

"Whadda ya doin' after the fight, big boy?"

My abstract glance at a primordial, possibly Cretaceous, bay bottom. Acrylic/canvas. The winter is getting to me. 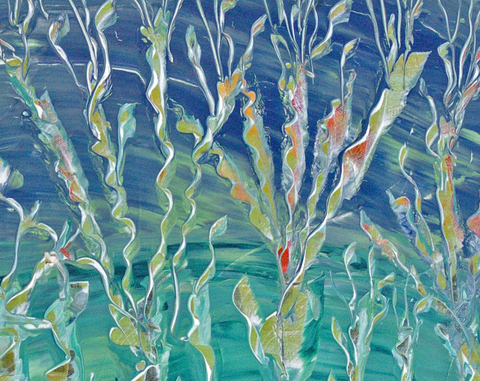 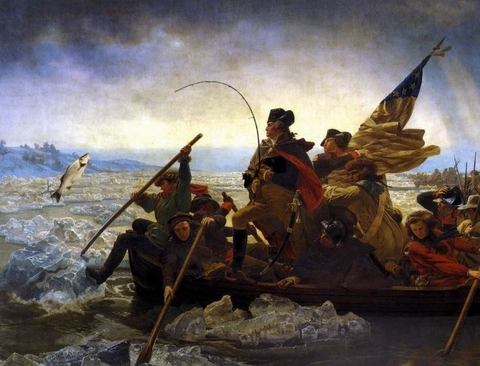 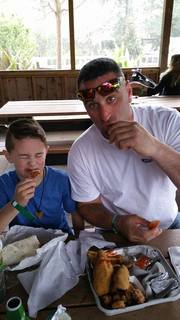 Odd how much the head of this yellowtail looks like a bluefish.

Talking of east Coast Blue marlin, This one was mistaken for a black marlin as we were on No 5 Ribbon During the lizard Island Black Marlin Classic and plenty going on. It was released as a 1000lb Plus fish Verified by Capt Heydon Bell on the vessel " Release " who watched it jump by his boat, and also mentioned it looked like a blue, I only Came across the Photo recently. Hmmm Have a close look at this one.

The day after I weighed the 836 lb on the Gold Coast I lost a much larger fish, Same spot same time of Day. The Gold Coast is up their around December January for some Big Blues, One Day One Day.

Where do you see milder air for next week? Elliot Abrams says a significant storm is possible next week. And you may be clobbered again.

Bull ... That warmer doesn't discount storms ... It discounts frigid temps.  I'll modify it a bit since I see unstable times ... but there is milder air via weather out of the west.