"Come on, Hon, how hard can it be to teach a kid to go down a sliding board. If you're that worried, just watch out the window ..."

Below: Hooked into a currentfish. Below: Even the dog be thinkin' "This is mid-December, dude?" Tuesday, December 15, 2015: The bright and mild days just keep on comin’. Today’s sun had a decent west blow beneath it. Should be good woods weather for me tomorrow with Thursday showing us some inch-deep rainfall.

We’ll see a quick chill for the weekend, though the Island won’t even get below freezing. What’s more, I now see more and more forecasters agreeing that is could be the warmest Christmas day on record … possibly by a long shot. Not just that, but next week could also experience weak winds, allowing boats to bolt out for black seabass, tog, porgies and any other sundry bottom fish, like cod and hake, that might show. I haven’t heard of any cod though I’m sure some are on scene.

Speaking of porgies, aka scup, they are making quite a wreck showing.

When I was majorly young, porgies were a first-line draw on the advertising boards of many a headboat. Among those boats I recall fishing atop the Black Whale, The Big Day and, up in Barnegat Light, a personal favorite of my dad’s, George and Jack Svelling’s Petrel II. My dad and his Manahawkin buddy Mel Bennett caught all the fish while I got green-faced seasick. It wasn’t until I began surfing the seasickness bug backed off, though I inexplicably had a hideous bout of just-kill-me-now seasickness going offshore aboard Lindsey Fuller’s June Bug not that many years back. Might it have been night-before partying? Fortunately, that beast hasn’t attacked me since.

Back to those porgies, it’s broken record time as I swear up and down that these are fish that absolutely should be cooked in the round, as in unfilleted. Ask any Asian epicurean and they’ll doubly confirm that point. What’s more, these tasty critters do not freeze all that well as fillets, due mainly to their thinness, which lends itself to freezer burn. Best imaginable way to serve porgy: whole and swimming (figuratively speaking) in a rich black bean and scallion sauce. 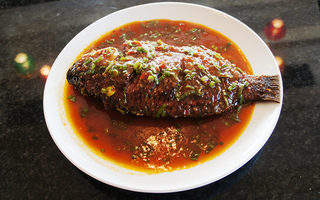 This Asian-inspired sauce is a combination of black bean-garlic sauce, scallion, rice vinegar and crushed red pepper. It’s a salty-spicy sauce to drizzle on sautéed fish or chicken, or use it as a dipping sauce for grilled vegetables. 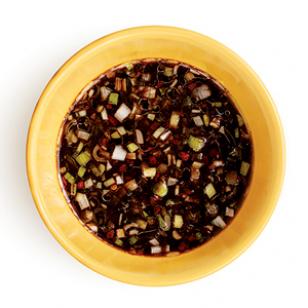 Gift idea: Give a subscription to

A little nautical this morning but they are chewing nice!