Tuesday, August 28, 2018: Despite the nasty heat, we remain in a relatively low-wind pattern; a close-up of famed shark bite/nip ..

A sure sign you're just not showing your pup enough quality time ...

Then there's way too much pet involvement, dude ...

Nothing dangerous about this prank, right?

JUST FUN FISHING TO ME: I have a quick follow-up to last week’s shark-bites-angler tale out of Surf City. Added incoming info suggests it might have either been a selfie gone wrong or a four-foot-ish brown shark taking umbrage with being dragged back toward the ocean for a proper and legal release. If so, such a release-based bite is far from a rarity. The latest shark-bite data – and all such bites are well followed -- proves that the free Willy phase of sharking is a notorious revenge-of-the-shark bite-back time. Experts have long warned anglers – with living proof available on YouTube – about the bloody mayhem that can occur when a shark landing is winding down, along with due diligence.

While releases gone amuck have led to shark teeth meeting man bone, the recent LBI bite-back saw no egregious bodily harm done to the angler, who knows angling quite well. Nothing bad befell the other three guys who took time to pose with the capture.

Even with this incident barely healed, I’ll openly admit to fully endorsing catch-selfie-release angling methodology, a la sharks. There’s just a gaping need for added vigilance during the “release” part. Thinking on the sharks’ behalves, a quick freeing is the only way to protect the lives and times of often-federally-protected, just-landed sharks. A shark’s insides are especially thankful.

Most folk don’t realize that even the most bullish sharks, when pulled onto land or on-deck, can suffer catastrophic internal organ damage. This is due to both their body-wrenching writhing and also a crushing top-body heaviness when on land. The quicker sharks are released, the quicker the gravitational weight of the world is relieved, and the water’s buoyancy performs its equalizing magic.

Even though a rapid interplay twixt angler and captured shark is the conservationally sound way to go, the accompanying bloodletting by anglers hints at a glitch in my catch/selfie/release Manntra. The faster a release is performed, the more piss and vinegar the shark still has at its turnabout disposal when being hauled toward the water. What’s more, when an distressed shark sniffs the wet sand, its spunk level explodes. Spunkiness and revengefulness seem to go hand-in-hand – maybe more like mouth-to-hand.

I’ll re-note that sharks have keen night vision, enhanced by electronic skin-surface sensors, akin to added sight. When coupled with a shark’s ability to see when out of the water, many a bitten soul is left rightfully suspecting, “I think that bastard swung around and bit me on purpose.”

Grabbing at solution straws, might it be advantageous for sharking surfcasters to bring along a tail rope? That would seemingly distance the angler from the shark’s biting end when hauling it waterward. By the same token, trying to then undo the tail rope, just as the shark goes a bit ballistic with the taste of freedom? I’m open for suggestions. Just keep in mind it is federally illegal to, say, bat-bop a shark on the head to create a safer release moment.

Here's the non-worrisome wound ... and some looks at the snappy Surf City shark ... and friends (via Michael M.) Sorry, but it looks like a fun brown shark hookup and release , vis-à-vis, s*** happens. 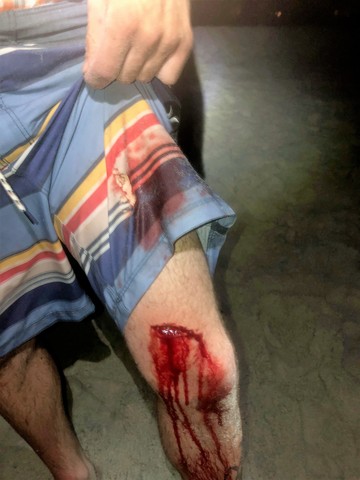 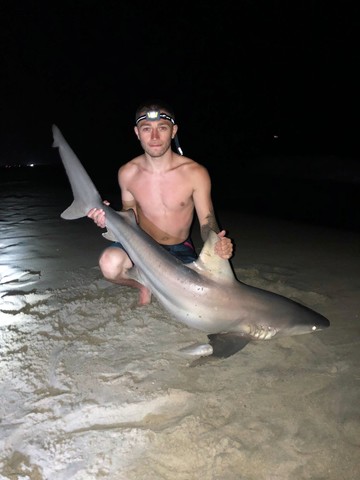 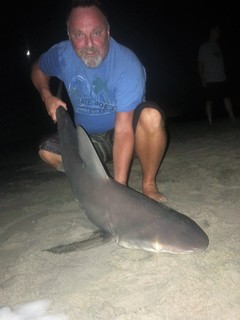 By the by, I stand behind my ongoing support of sharking, based on the fact that not all sharks are illegal to catch and, even more, the fishing overall has been so restricted by regs and bag-limit cutbacks that anglers must be allowed to fish freely on a catch-and-release basis, regardless of the targeted fish. While I'm highly supportive of commercial fishing, I still need to duly point out that commercial fishing entails massive by-catching -- and releasing -- of protected species. Why should recreationalists not be afforded the same privilege, especially when factoring in the high survival rate of their released fish? I'll likely here some rebuttal from enforcement types.

I must pass on that I'm getting some negative feedback about shark anglers prying open a shark's mouth for pics. Ditto for sitting on a landed shark. Truth be told, sharks are highly inclined to open wide in nature. However, sitting on a shark could easily doom larger sharks, already dealing with the crushing body weight when out of water. Yes, researcher pull huge great whites on-board for tagging but, guess what, they're one of my sources for explaining the suffocation dangers of a shark out of the water ... for too long.  They know the risks and minimize them. 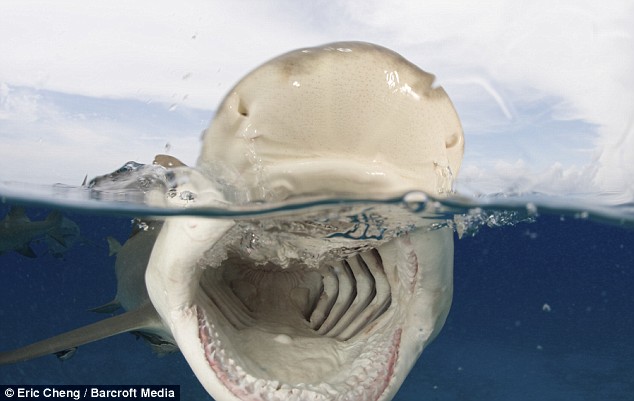 Tuesday, August 28, 2018: Despite the nasty heat, we remain in a relatively low-wind pattern. Sure, afternoons can kick up a fuss out of the south but after dark the winds shift more offshore/westly. That leaves a goodly number of fishing windows open, even for fluke drifting outside the inlets. These noncommittal skies will persist through the weekend. Get out and cash in on the niceness. Look for a late-summer cooldown next week, though winds should remain tame.

Blowfishing has blown up in west bay areas. Chum-based anglers are bagging them by the bucketful. Sorry but I have to semi-burn a general area by suggesting keeping the plant in sight. Some of the puffers are jumbo-sized, per Paul P.

A blowfish regular swears they’re unusually tasty this year. I absolutely believe certain fish can vary in taste – greatly in the case of bluefish; very little as far as striped bass go. Most consistent of all are fluke, while winter flounder flavor can be all over the board, sometimes bordering on muddyish. While my refined taste buds can’t taste it, I’m assured that blue claw crabs can also vary greatly in flavor. I can definitely taste significant flavor variance in snow crab legs, possibly based more on cooking method and length of time frozen. Shrimp flavors are so scattered you simply need to go with the flow of each individual tail taste. Can you tell I’ve got a hunger on here at work – and I'll be doing a 12-hour stint until midnight tonight.

There’s a bunch of sharking stuff below but I do want to mention some fine browns being caught, literally north to south on LBI. No sand tigers that I’ve heard of, even though we’re at the height of its nearshore season.

My weekly column, out tomorrow, speaks of spinner sharks in very close. These are very tough to tempt to hook, though I’m told they can go psycho when first hooked. They also have one of the strongest bites in all of sharkdom.

Rough pic of a Brant Beach spinner over the weekend ...

Red List Category & Criteria: Near Threatened (That was years ago. It is likely “threatened” by now.)

Because of the black-tipped fins, many anglers think the Spinner and the Blacktip are one and the same.The Spinner is more slender in shape and has a longer snout. The dorsal fin begins at a point just aft of the pectoral fin.

GAME QUALITIES: Good fighter on light tackle; often gets off the high, spinning jumps that give it its name.

International Commission for the Conservation of Atlantic Tunas (ICCAT)

The ICCAT finning ban requires full utilization (defined as retention by the fishing vessel of all parts of the shark excepting head, guts and skins, to the point of first landing) of entire shark catches. Fins should not total more than 5% of the weight of the sharks onboard. Does not specify if it is whole or dressed weight. 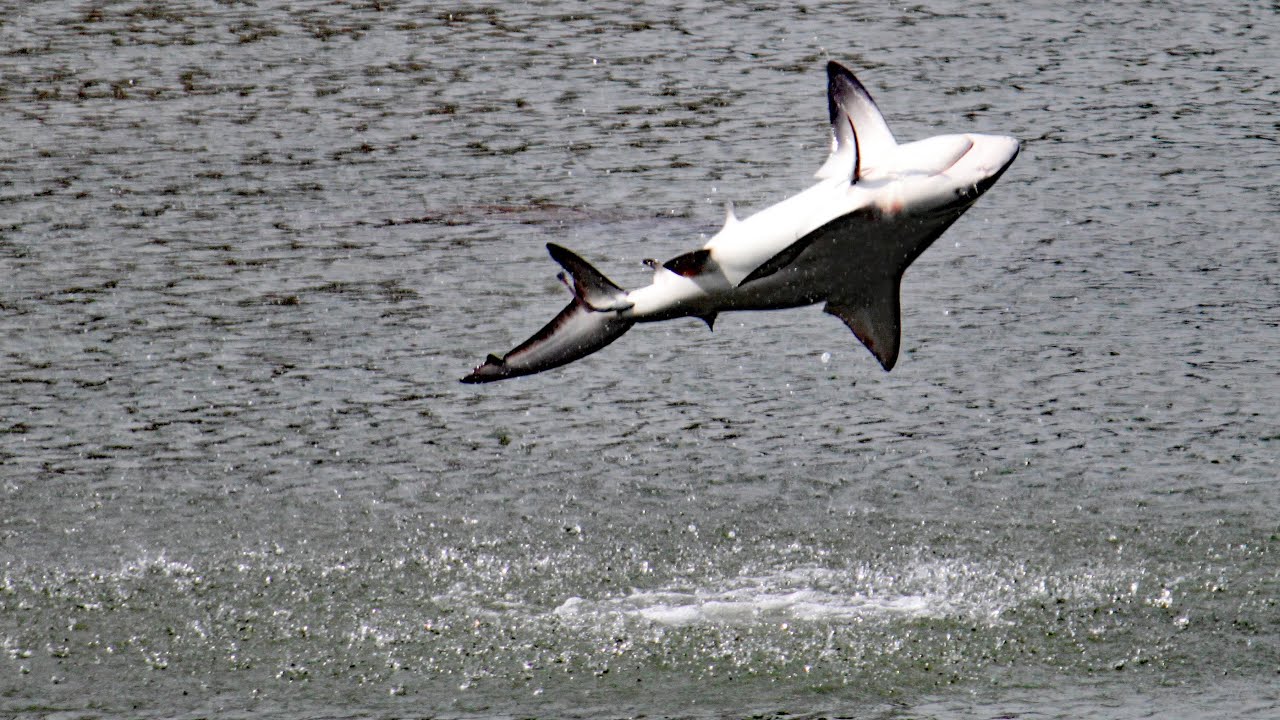 If variety is the spice of life, then the Debbie M was around 500,000 Scoville Heat Units (scale used to measure the spiciness / heat of peppers) this past week! My clients got into fluke and 1-5 lb. blues early in the week, then Saturday was an “off the beach” shark trip. Sunday, I put Joe T’s group on: sharks; bonito; and blues. Talk about variety, and that’s my specialty. Fluke are everywhere.  Still good numbers of them in the early season haunts, around the inlet, as well as around inshore structures. The inlet continues to be ground zero for summer bluefish with a splash of schoolie bass at times. The blues have been holding here because there is an abundance of sandeels and bay anchovies. Been like that all summer. Question: if a bay anchovy swims into the ocean isn’t it really an ocean anchovy? Know what I’m saying?

So, about that Saturday shark trip.  The DeCicco clan went 2 for about 10. It was one of those days. End result was a 6 to 7 ft. Dusky and a 5 ft. + brown. We hand a spinner shark on for three jumps, or should I say spins? Very cool to see a 5 ft. shark jump out of the water. And only about a mile and a half off the beach I might say. Speaking of shark’s jumping……during Sunday’s trip we witnessed sharks jumping out of the water several times as they actively worked over schools of bunker. It was a Nat Geo moment indeed seeing the sharks feeding. After landing 1 nice brown shark, we went on the troll a few miles off the beach. Trolling yielded 2 nice sushi grade bonito. We finished the trip with a couple of blues on poppers and BKDs at the inlet.

I’m now booking fall striper trips. Shoot me an e-mail or text, or call me if you want me to pencil you have a date you want.

While monarch (butterfly) caterpillars get all the ink, let's hear it for this Little Egg Harbor parsley-eating black swallowtail (to be) ... that posed for me.

I witnessed a shark struggle with his/her life being reeled in by a young surfcaster Friday.. The picture pose, unhooking, the whole 10 yards. The thing was brutalized . It attempted to get back into the water, but was restrained. Finally,  after all the phones were put away, did this animal regain it's watery home. Not sure if it will survive.