How watching American sports has influenced European soccer players. You've heard of the hidden-ball trick ... This is the hidden player trick.

Below: An IED ... Idiot Explosive Device, via a detonated air bag ... 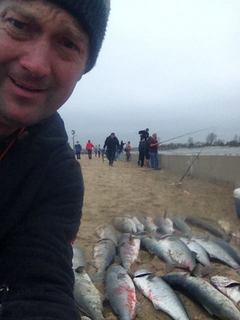 Tuesday, April 26, 2016: Today’s late-day T-storms are just the start of weather theatrics we really don’t need, including winds all over the compass, too-chilly daytime temps and spitty weather. It all makes for tough angling for the blues, bass, weakies, and drum we know are out there but best fished when it’s at least a tad suited for beast and man.

Further below is a segment on the dredging of Double Creek. I tried to get word on Oyster Creek but it is apparently not part of the channel dredging for this year.

I’ve checked almost daily to see if there is any update on the LEI/Holgate replen plan. OK, so maybe it’s more my type of plan. There are still some folks jockeying with the environmental demands of taking sand from the bottom of such a dynamic inlet. Believe me, I looked into the danger to fish and such and it’s bare minimal with the filtering system/screening used on the dredge pipes. I can make a solid case that the dredging in the inlet could draw in fish. It will be interesting to see if they go through with the LEI dredging and fish start to show up with bellies full of mantis shrimp, one of the primary crustaceans found on bottoms with high water flows.

Below: Its an mantis shrimp, juvenile. An LBI wash-up after recent blow. I put back in the water and it blinked a "thanks" at me. 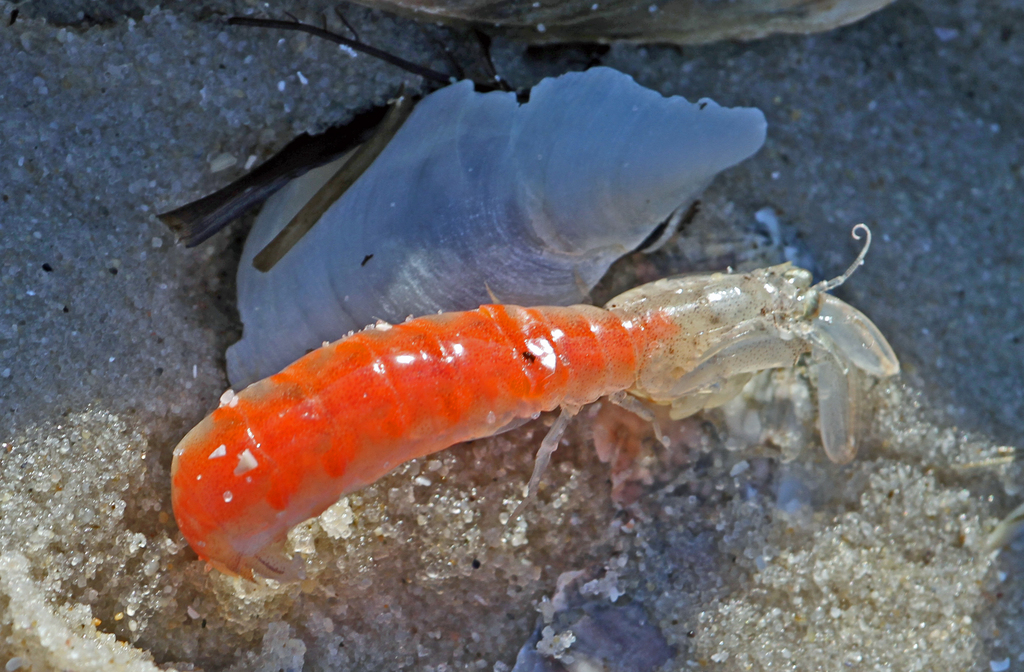 DOUBLE CREEK DREDGING DISTANT: For the countless mariners that use the still-shallow and continuing-to-shoal Double Creek channel, it’s once again hurry up and wait.

The “hurry up” part is getting your boat up on a plane so you have the best chance of trimming over the shallows of that troubled waterway.

The “wait” part comes via the latest update from the state, further putting off the mechanical deepening of the channel, along with other nearby channel areas. The dredging won’t begin until October of this year, going on through December. That means the channel is considered unnavigable at this time and won’t get markers this summer.

It was a goodly time back that we were first told of an approaching dredging project. Things then bottomed out, when considerations were duly given to the likes of summer flounder and eel grass beds.  Environmental issues ruled the day and waters, playing heavily on the minds of the NJDEP – and friends.

Understandably, summer dredge was rule out. At the same time, spring and fall weren’t looking all that cherry for sucking bottom muck. Winters? Forgetaboutit.

So now, in a case of going with the least-of-the-bad, an October suction start should allow for summer species to have sorta moved out, while winter species, like winter flounder, should be in flux, meaning they can hopefully hightail it from the bottom vacuuming. As to buried crabs and clams, well, they might be in for a wild ride. I’m checking on where they – and the so-called dredge spoils – might be transported, via pipes.

Below: Imagine having to deal with this sand circus to keep channels open.

The first phase of the dredging will be west Double Creek, then moving eastward. Everything sucked from there will travel a four-mile piping system, ending up onshore at Oyster Creek Generating Station. Hopefully not to quickly cover up green glowing rods. Thanks for the accommodations, nuclear folks.

Double Creek will be deepened to at least six below mean low water, with some areas being dredged to a seven-feet below MLW.

The dredging gets more interesting when the work gets closer to LBI. A goodly chunk of sucked-up bottom stuff is going to get placed in Barnegat Light State Park. It will be piped in low areas adjacent to the New South Jetty; south of the concrete walkway -- where erosion has been a bugger, already undermining the jetty and concrete decking.

As to the look, feel and smell of many cubic feet of bay bottom seasoning next to one of the more popular tourist spots in the state?  Hell, there will be winter and spring for rain to rinse off the clayish stuff. Then, the sun should bleach the sand to a sugary look.

I’ll go old-timer by noting that, back in the day, dredged goop was scattered about freely -- heavily piled on Cedar Bonnet Island and High Bar Harbor. I had the pleasure of sloshing around in it soon after it was placed. I was hot on the heels of any sucked up pirates’ treasure. Since I’m not living in a Loveladies oceanfront, you can take a wild guess at my success. As I recall, the relocated bay spoils weren’t all that bad, at least for a born mud-frolicker.

Other areas to be dredged next fall/winter include the channel behind Barnegat Light’s boat docks and boat launch area.

The story, in greater detail, can be found in this week's issue of The SandPaper.

Below: Photo by james brazel ... 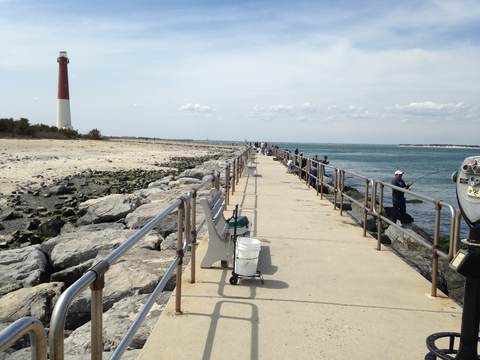 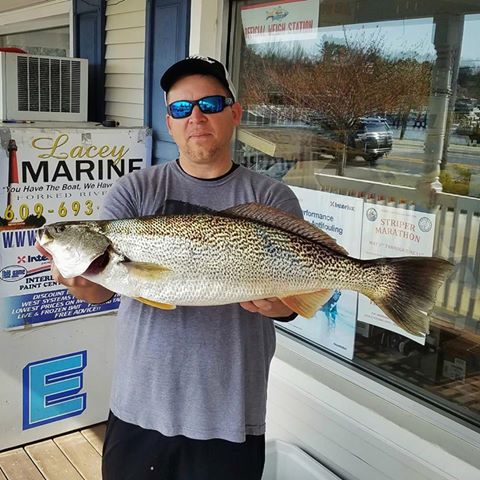 Below: Photo I took at this exact time of year, 2013. I wonder how big this buck is now. 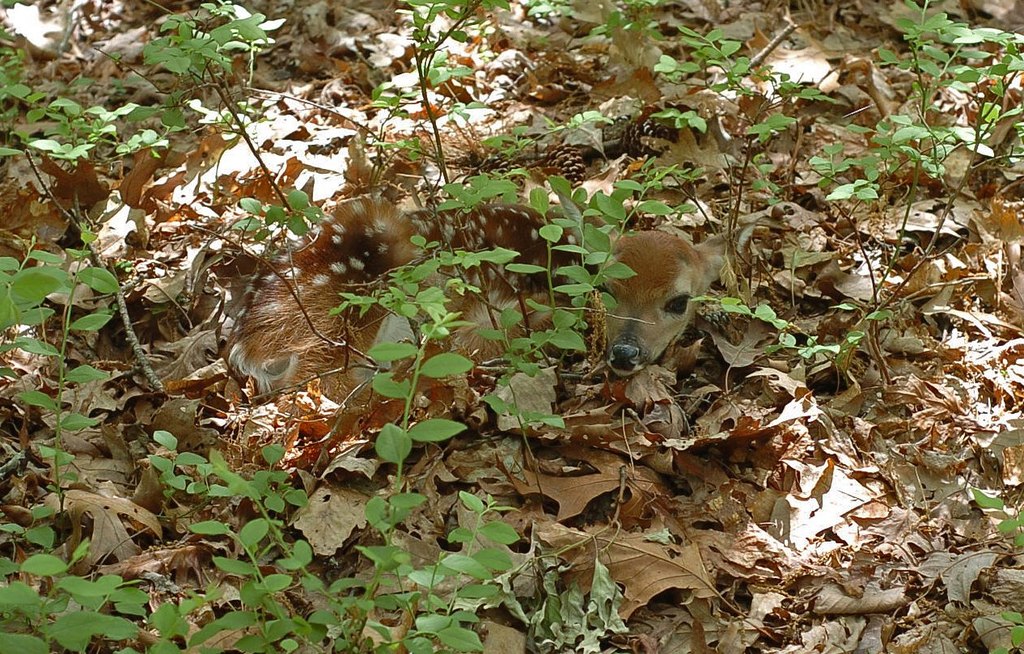 "New Jersey Blackfish: How to Catch the Next World Record Tautog"

21 lbs!!! Girth on mama female is ridiculous... almost round... Tried to release her but she didn't swim. Trying to revive here now in live well hoping she will come to... Will have some more pics b4 we try n release her again . Congrats to
Joe Zagorski on his new personal best and fish of a life time 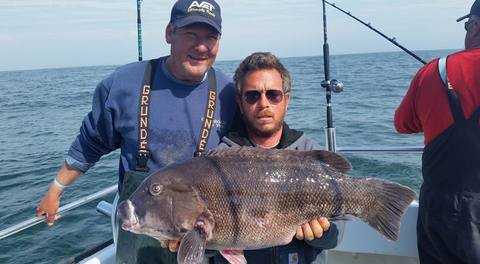 This is too amazing not to pass on  ... It's verified. Dr Michael Shannon saved Chris Trokey's life when he was born ... 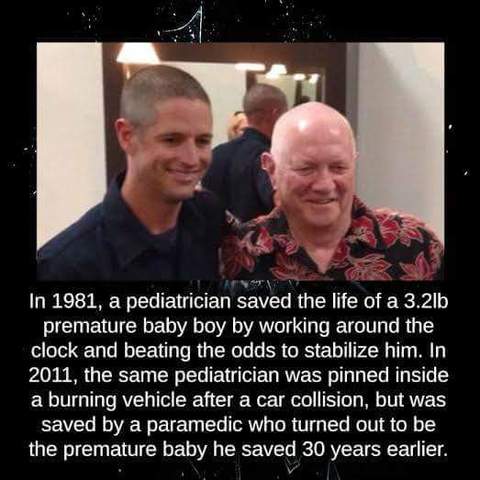