If you think it'll be hard explaining the ankle tattoo you got when you were younger ...

Below: The latest in the effort to stop silver carp: Tuesday, April 19, 2016: It makes me crazy to be stuck in-office for 12-hour Tuesdays. As Dylan might say, “Stuck inside an office with the newspaper blues again.”

I did get to read a slew of reports of decent bass fishing -- but even better tog fishing. See pics below.

I was also told of some very ugly snot-grass outbreaks, mainly on the west side of Barnegat Bay. It is so bad that folks going after shrimp or blue claw crabs can barely work through the crappy brown algae. The problem is that stuff spreads like wildfire and will surely end up heavily impacting eel grass beds on bayside LBI, especially down near High Bar Harbor.

Is it an outbreak based on too much of a nutrient load in the bay? Most likely. We have strict fertilizer laws in NJ but I just don’t think all that many folks, especially those who don’t live here all the time, give a rat’s ass. They need green grass or whimsical ornamental gardens for their own gratification or to entice renters. 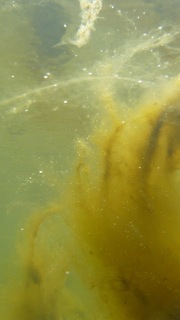 Below: At its catastrophic worst. On a better note, the blue crab count is insane for this early in the season, mainly west bay and into the back bay ditches. I have to think they’re there seeking sun-warmed waters. It will take the pros, like Andy T,. to get a more accurate read on why they’re so plentiful over there.

Below: Before and after. 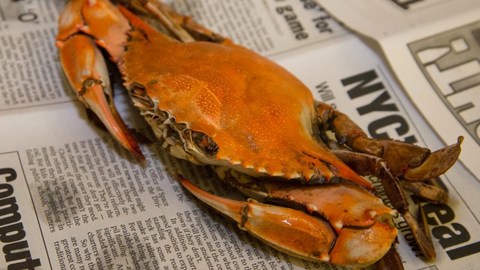 The bluefish, after a quick sweep-by, have quieted down. That means nothing in terms of what might be on the way. A buddy who caught a few to smoke, says they are lean but delicious. Both he and I agree that spring blues taste best. They long ago burnt off any bunker effects and are now fattening on grass shrimp and crabs … even the larger blues. Above: A perfect look at an all-head spring bluefish, via www.courierpostonline.com

Based on nothing more than law-of-averages, I’m betting we’ll be seeing a banner black drumfish spring. OK, so I’m also basing that on the drumfish already being caught and the ongoing fact that there is virtually no serious commercial harvesting of black drum. Of course, commercial shrimpers often knock the drumfish stocks something awful, despite efforts, oft insincere, to reduce bycatch in that highly-destructive fishery.

A GLOWING ECO-RATING: There’s something good to be said about Jersey. In fact, there might even be a load of above-average things to be said in recent years, as fair-weather residents move their whiney asses out of state and leave us a little breathing room.

A damn-decent plaudit was vicariously sent our NJ way, via WalletHub, a D.C.-based personal finance website. An in-depth study done by WalletHub analysts compared the 2016 eco-health of all the states, seeking a read on “the health of the current environment as well as the environmental impact of people’s daily habits.” See https://wallethub.com/edu/greenest-states/11987.

To find which states negatively rock the environment and which ones strive to roll with a cleaner flow, the analysts interpreted data, including, “Total Municipal Solid Waste per Capita” to “Energy Efficiency Score” to “Carbon Dioxide Emissions per Capita.”

While I have no idea what those things are, I’m betting they’re ways to determine every state’s environmental state-of-mind. Those states-of-mind were then rated from the greenest to dirtiest.

No, we didn’t win top-spot; numero uno honors went to greenie-heavy Vermont (1) and Washington (2). But, we shined forth in a highly honorable 10th place.

However, I feel motivated to critique the study since the WalletHub rating system failed to factor in our being 1) one of the smallest states, 2) sporting entire heavy-industry cities and 3) holding the highest population per square mile. When looking at the insanely uphill battle we must fight to reach an upper-grade green status, Vermont and Washington pale by comparison.

Yes, I’m being overly NJ-centric … but for good and clean reasons. I’m among the many Jerseyans who has chosen to fight the good eco-fight – for me dating back nearly half a century, to those not-so-sweet fish and dolphin-die-off days. The results of the in-state fix-the environment effort were actually a bit of a shocker, even to me. Things got better … then way better. Because of this, we’ve gotten cockier, which is a good thing. We now demand more.

With Earth Day surrounding us -- having become Earth Month -- it’s a time for back slapping over a job well done and also the perfect time to muster more environmental warriors for the battles to come, especially in the fight to clean up combined sewer overflow in the north lands. I suggest one way is to sign up at Alliance for a Living Ocean, at http://www.livingocean.org.

Below: I got to enjoy outdoor koi ponds in Hawaii. Around here, the otters enjoy them a little too much. 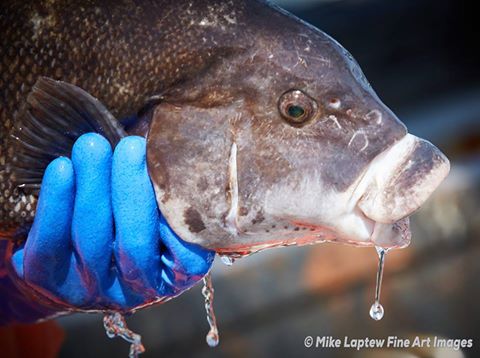 Jerry Postorino added 5 new photos — with Roger Housman and 5 others.

Fish Monger II (Manasquan) Tues 4/19 Blackfish Another Full Boat limit+++ (13 man) to 8lbs! Well what a day of blackfishing just about as good as its gets. Action from start to finish all around the boat... Pretty much one stop shopping w a few adjustments early limit and released another whole 10 man limit of keepers for another day... loads of life n once we got em going they were chomping like piranhas... tons of shorts even some double headers then came the roasters Blackfish Douglas Karkosza 16 keepers, Jersey Joe Mcneal with 14, Alex mvp with 11 Roger Housman with 10 everyone orl... total of 84 keepers ( 21 man limit worth) n a couple hundred shorts Keeping our 13 man boat limit of 52 and releasing the rest. Get em while u can Thanks Guys !!! 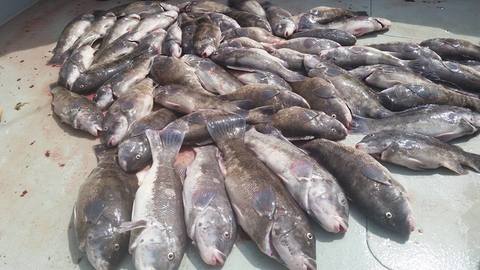 I was sent this photo of a 680-pound, world's largest rod-landed grouper ...a Goliath (Epinephelus itajara) caught off Fernandina Beach, Florida in 1961. Back then they were called jewfish. 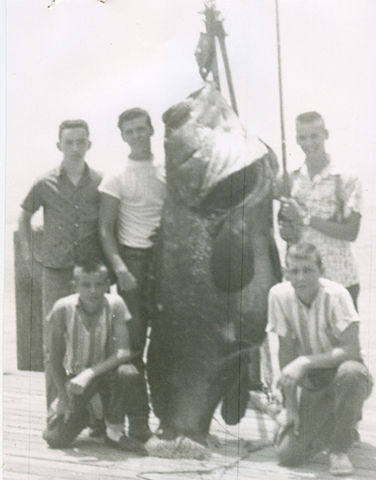 Bass angler Toby Lillard shared a video over the weekend of an unwelcomed surprise a friend had while fishing on Barkley Lake.

EDITOR’S NOTE: This video contains explicit language. Despite the unfortunate use of profane language, this is an important and educational video for both tournament and recreational anglers. We believe this will help teach anglers how to identify potential illegal activity on our fisheries in order to help maintain and protect the integrity of this great sport.

Angler Toby Lillard had a friend share a video after he discovered a 55-gallon drum filled with a limit of big largemouth bass on Barkley Lake. The drum had holes drilled in it and a makeshift door for quick, easy access to the fish which were attached to culling buoys.

Fishing tournament cheaters have been known to sink these drums beneath the water and fill them with fish they catch during the days leading up to the tournament. When the tournament starts, they’ll sneak back to the drum, retrieve the fish, put them in their livewells and weigh them in.

If you ever find yourself in a similar situation, we strongly suggest you immediately contact your local DNR and give them the exact location of the trap. Do not tamper with or empty the trap. This will allow the game wardens to set up a sting operation so they can catch and charge the ones responsible when they return to retrieve the fish.

Nantucket native dies after being trapped in mud

TRAGIC DEATH: Thomas R. Larrabee of Nantucket, who died Saturday night after being trapped overnight in mud, is seen in an undated family photo.


Whenever Hummock Pond on Nantucket was opened to drain and there was a chance the salt marsh might give up her long-buried secrets, Native American artifacts aficionado Thomas R. Larrabee transformed from a doting great-grandfather to the adventurous boy he used to be, born and raised on the island.

“He was like a kid. That’s all he had on his mind,” Larrabee’s son, Thomas J. Larrabee, said yesterday after his 81-year-old father died Saturday night, after he was trapped overnight in mud up to his chest while searching for arrowheads with his beloved Springer Spaniels, May and Lily.

“Both dogs were with him. They wouldn’t leave him. They were actually growling at people pulling him out of the mud,” said Larrabee, who helped with the rescue effort Saturday afternoon some 16 hours after the family reported him missing. “He couldn’t talk he was so hypothermic, but he was conscious and knew I was there. I’m glad I was able to say goodbye. The outpouring from the community over here is incredible. He’s touched so many lives on this island.

“My heart is bursting,” he said through tears. “He was my best friend, my mentor. ... He’s going to be so missed.”

Larrabee said May, who is 15, blind and deaf, was also mired in the muck, while the younger Lily was able to make it to drier ground. Though mud was found in May’s lungs, he said both dogs were fine after being checked out at Offshore Animal Hospital.

The elder Larrabee set out with May and Lily on Friday afternoon, but, his son said, “He forgot his phone and didn’t tell anyone where he was going. This is not uncommon for my dad.”


His father managed the Nantucket Conservation Foundation’s cranberry bog for 60 years until a stroke three years ago persuaded him to pass it on to his son, who is now preparing his own son to take over one day. He said the three generations were featured on the cover of last year’s Nantucket phone book.

“My dad always told  everybody he had cranberry juice in his veins,” Larrabee said. “As a teenager, I thought Nantucket was the hell of the world. Little did I know it was the complete opposite.

“My father loved his whole family. He’s that papa everybody wants,” he said. “He died doing what he loved and if I’m half as lucky a man as he was, I’ll be very lucky indeed.”