Thursday, September 17, 2015: Well, there may be no greater proof that it’s better in September than this September.

Below: "The most expensive GIF of all time ... if you have $5,800 to spare, and want to make a statement about the value of art in the digital age, you can have an extremely expensive GIF file delivered to you. In, eBay estimates, five business days." ... Please do not watch this unless you're serious about buying it one eBay. ..." per http://www.theatlantic.com.

Thursday, September 17, 2015: Well, there may be no greater proof that it’s better in September than this September. Of course, I’m talking weather. The arriving hot-ish days are positively going to keep surfcasting in the summer mode, meaning it’s a slow go.

Ocean temps this a.m. were into the upper 60s but will actually warm up via solar heating and light afternoon onshore winds.

The fact the winds are light and variable shows we are properly transitioning from a summer SE wind pattern to a W wind. Those W winds are far showier than any other prevailing wind, as we know when we feel the house rocking in the winter.  But let’s not go there yet … no need. The warmth is with us and will stay for weeks to come.

I have yet to catch a single fluke. It’s positively through a lack of trying. I have the jigs and the GULP and the squid and the Holgate frontbeach. What I don’t have is the gumption. Unlike boat fluking, where you drop a line or three, and sit back sipping a beverage and waiting for a rod to slowly bend, surfside fluking is a fairly high-intensity affair. Repeated casts and retrieves become your “drifts,” along with walking and more walking. One of the fun angles of seeking fluke in the suds is how hard they hit, totally unlike the dead-weight pick-up of a boat fluke. The flatties even fight way harder in the surf.

I’m just getting around to sending in my Bonus Striped Bass permit request forms. It entail mailing a printed out form, downloaded online, to the state folks at Nacote Creek. I’ve thinking of just hand delivering it down there. Maybe that’ll move me up the waiting list. Just kidding! The permits are issued in the order they’re received so hand delivering it would be just about the same as mailing it … without burning gas.

And how about gas priced dropping below $2.00!? I’m thinking about filling up all my five-gallon buckets with the stuff, just in case the prize goes crazy again. DOWN ON JETTIES: I want to offer up a theory that might rock the jetties upon which LBI surfcasters happily rely – and stand. 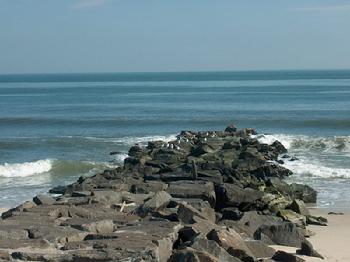 After carefully checking and rechecking prime fishing areas along the Eastern Seaboard, I’m getting this nagging feeling that jetties might actually screw up surf fishing.

What?! You scream from every surfcasting corner. And I don’t blame you … from an LBI-loving stance. After all, our Island surfcasting is anchored by utilizing those jetties inside out. However, our sense that those rocks actually attract gamefish might be deceiving. Sure, they draw in some gamefish, but, they just as likely repel even more gamefish. 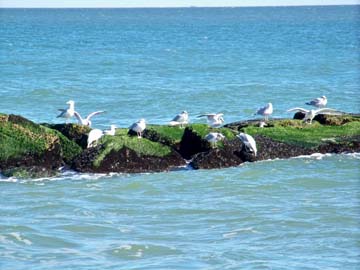 First of all, let me make it clear this is NOT another bid to gain acceptance of the beach replenishment project, which has already plowed under many a jetty. I’m no longer a member of the beach-replen cheerleading team. I did my flying splits in support of it and it’s time for me to quietly sit back and recognize that the replenishment is a done deal. To those who are now fighting to change the “tie-in” profile for the rest of the project, knock yourselves out. It’s a worthy cause and one I might join once the stats are in on whether such a design-tweak helps humanity – or can be done, financially speaking.

That said, my growing suspicion about jetties has come about by looking at the phenomenal fishing – often far above our daily angling action – taking place along unfettered stretches of beach. From New England to Florida, open stretches of beach rock … without rocks.

By the by, fishing piers and such are way different. They don’t put up an impervious wall the way jetties do. I’m also not even remotely talking about inlet jetties, i.e. true jetties, as opposed to the “groins” which we call jetties. Inlet are where bays and sounds meet the ocean, offering predatory creatures the feast of marine life within them. Inlet will always offer the best fishing imaginable.

I don’t expect you to immediately jump upon the “Jetties Suck!” bandwagon, nor am I willing to go quite that far myself. I’d just like you to think like a gamefish for a minute.

When not spawning, a gamefish’s sole purpose in life is to eat … and eat with the lowest possible output of energy. That economy-of-effort mandate is literally life and death for a creature. If you expend more energy than you’re taking in, you’re eventually dead meat. (Believe me, I’m going somewhere jetty-ish with this.)

For both pack feeders, like bluefish, and opportunistic grubbers, like bass, there is a marked method and rhythm to how to they hunt/forage. Regardless of the variations in those pursuing methods, there is no better place than a long open surf zone to dine with the least effort. The ultimate prey-stalking setup is miles and miles of open areas; to track down and pursue prey.

Below: Inlets are always epicenter for fishing. www.longbeachislandjournal.com While we have grown to love the concept of beachline structures for our own angling convenience, gamefish do not find jetties at all amusing, especially when placed every four human blocks. They make grabbing prey a high energy-output affair.

But, you retort: “I’ve seen bass and blues pinning bait to the rocks (jetties).”

What you’re seeing are one or two bass trying to make the most out of nabbing those holed up forage fish. Face it, if foraging is so damn ideal near jetties, why aren’t balls of bass stacked there, 24/7? It’s a decent place for a few rogue gamefish but the real feed is taking place along long unencumbered stretches of beachline, i.e. places like Island Beach State Park. Hey, I’m allowed to suggest this surely unpopular proposition since I’m a diehard LBI’er. I love fishing here. However, I’ll bet the farm that fishing was way better here before all the jetties were put in.

Reposting this blog ... it had posting issues the first time around ... https://jaymanntoday.ning.com/profiles/blogs/tuesday-september-15-2...

As the nights in Beach Haven start dropping into the low 50’s, the thoughts of the captains of the Beach Haven Charter Fishing Association begin to turn to fall fishing. Fluke season will be ending on September 26, but as the water temperatures cool, striped bass should be arriving soon. The offshore tuna trips should continue to produce well into November.

Captain Bob Gerkens had a bachelor party head offshore for tuna on his boat, the “Hot Tuna.” Nick Nastasi of Waretown was expecting a fluke fishing trip on a friend’s boat and was surprised to learn that a group of his friends had instead arranged for an offshore trip as his bachelor party. Captain Bob headed to a northern canyon and initially hit a few lobster pots that were holding Mahi.  Using light equipment the group boated 27 Mahi, a few of which were “gaffers,” before setting up for the evening troll.  Under the guidance of mate Dante Soriente, the troll resulted in Nick getting to successfully fight and boat a 190 pound bigeye tuna. A yellowfin was also caught on the troll.  Joining Nick on the bachelor party trip were Mike Thompson, Rickey Matthews, Steve Rupinski, and Mike Nastasi.

Captain Fran Verdi reports he still has a few open dates remaining on the “Francesca Marie” for inshore fluke trips before that season closes. As long as the current weather pattern holds, he expects the fishing to be the best of the summer. Undersized fluke continue to dominate, but some nice fluke approaching doormat size have been picked up recently on both the Little Egg and Garden State South reef sites.

Additional information on the captains and boats of the Beach Haven Charter Fishing Association can be found at www.bhcfa.net

A marine biologist who grew up in Norwood has been reported missing off the coast of Panama.

Keith Davis, 42, works as an observer for MRAG on fishing vessels around the world. He ensures that members of the fishing community are abiding international guidelines.

He was reported missing Thursday while off the coast of Panama. His family said he had been working on the Victoria No. 168 -- a Chinese vessel -- for about 22 days.

"We didn't find any suspicious event or any sight of him. We broadcast a distress alert to nearby ships during the search, and one of them reported back about the missing person," the vessel reported to the Coast Guard.

“He has a very large group of friends who are worried. He's been missing since Thursday, and they stopped searching for him after 72 hours. We want him home,” said Michelle Buonora, one of his many Massachusetts friends.

One family member said Davis recently emailed his father and told him he was "uncomfortable" on the boat.

Davis' friends said that perhaps most unnerving is listening to a song Davis wrote to honor three other colleagues -- all observers -- who also were missing at sea.

“And it's sad to listen to that song now,” Buonora said. “We want to bring him home.”

"We're all very upset about Keith's disappearance. He is a long standing and very well respected member of the international fisheries observer community. We are doing everything we can to support the search for Keith and the investigation into his disappearance," said Marcia Malone, MRAG project administrator.

Malone said some of their senior staff are headed to Panama and hope to board the vessel when it is expected to arrive at port on Thursday. Another epic sunrise Albie bite today. 10 fish landed on the rocks, another 5 or 6 lost at my feet, and a ton of hits and long runs.

So much bait around its crazy.

Time to put some epoxy on them I love synchronized swimming, especially when performed by peanut bunker