Thursday, September 06, 2018: How about the odd showing of banded rudderfish in Holgate

And to think former softball pitcher Allen Languish thought there would be no future need for his skills ...

While Elanor Lewinsky opted to incorporate her skateboarding skills into her competitive weightlifting regimen ...

Discretion is the ONLY part of valor ...

Thursday, September 06, 2018: How about the odd showing of banded rudderfish in Holgate as reported yesterday by Greg O'C. I saw more rudderfish caught today. I have to think this could indicate some other exotics might be the in the early fall beachfront species mix. I’d sure like to see one of those huge school of sheepsheads wander in close. They had some huge schools of them just to our north. Divers have seen massive numbers of them near structure. Anyone dive the Barnegat Inlet jetties recently? It seems they like inlets, though that is likely due to their moving out of their favored bayside haunts.

I see on other websites that there are some question about the edibility of rudderfish. While I learned from Japanese friends that virtually all fish can be made quite acceptably edible when cooked or seasoned just right – or eaten raw – rudderfish would likely be borderline even for Asians, per many an opinion. That said, Waldo at floridasportsman.com reports, “If you cleaned every ounce of red off of it and it is super fresh it is a fine fish to fry. It may not be on the same level as grouper or snook but easily serves as a meal.... older than a week or so the only way I eat them is smoked.”

Here’s a video on filleting rudderfish, though I’ve never seen one even remotely the size seen here. Maybe a different sub-species?

HOT-FOOTIN’ HOLGATE: I did a minor Holgate hike-out – as in a few thousand feet worth. It was just too hot for the long haul. The most I saw of a natural note was a sparrow hawk, moving at its typical blistering sky speed, talk about a bird that always has somewhere else to be.

Equally speedy in their own right were tons of tiger beetles running the wrack line on the peopled beachline just past the parking lot. I’ve studies these astounding beetles for going on 30 years now. I used to capture them for needle-end display. No more lethal captures for me. Photos can now do the job infinitely better via with multi-angle images, suitable for framing. It does require a quick holding of a netted specimen, most of which must be held with extreme care due to their savage pincers.

While the load of them I saw zipping the Holgate sands were mostly common species, I did glance a rarity or two. Unfortunately, I didn’t have the right lenses for closeups, not to mention I didn’t have a prayer of getting one to hold still. It’s not their lifestyle when it’s hot out. And the hotter it is the faster they move, very lizard-like. With September’s blazing hot start, I’m betting they’ll be around for a while, hopefully into cooler times when they hit the brakes a bit more often.

Below: A Holgate tiger in a footprint. For whatever reason, most of tigers I saw were near beachgoers going into the water. 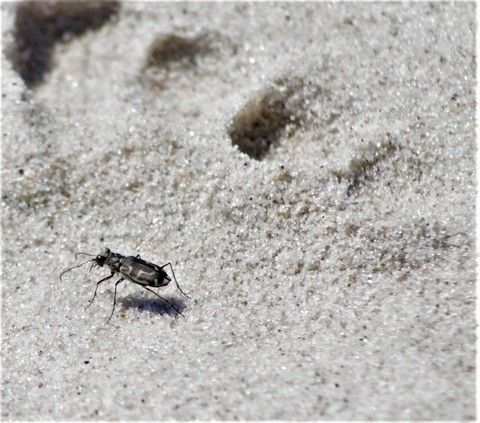 
The variety of fish in and outside the inlet continues to be amazing. For example, my last inlet / inshore trip was a short one. However short, in three hours we managed to land a dozen and a half blues on Mag Darters and BKDs and then

loaded the big guns, catching and releasing 2 brown sharks that were 5 foot +. You can see the action on my YouTube Channel here: Off the Beach Sharking Remember to subscribe to my channel so you will be alerted instantly of my new fishing video. I plan on doing many more this fall.  Southern speedsters are around, but you have to alert and put some time into finding them. Here is a pic of my bud Dave Werner with a very nice Spanish Mackerel. BTW, Spanish macs are top shelf sashimi J

Double digit short fluke, some small blues, a big sting ray, and the seasonal banded rudderfish rounded out our afternoon.

Holgate beach driving friends.... air way down. The beach is soft if you gotta stay high.

Labor Day weekend at the New Jersey shore is pretty much the traditional end of summer, but it certainly does not mean the end of summer fishing for the boats of the Beach Haven Charter Association. Rather, the captains are experiencing some of the best fluke fishing of the year as they fish out the final weeks of the fluke season.

To celebrate Labor Day weekend, the Senker Family and AVH Demolition jumped onboard the “Miss Liane” with Captain Ray Lopez for an offshore charter. By mid morning, the Senker’s son reeled in a 50 pound plus bluefin tuna. The bite didn’t as the eager anglers caught 5 mahi-mahi also. Another day the Crotty family joined Captain Ray for a day of fishing off Barnegat Light doing some bottom fishing. Throughout the day 8 year old Conor caught a keeper fluke for his family and along with numerous black sea bass.

On the boat “Starfish” with Captain Carl Sheppard and mate Marlyn Graham there has been some good fishing for bonita within 2 miles of the beach. They trolled their favorite lures at different depths to score on bonita ranging from 6-8 pounds. The fish have been swimming in with the snapper bluefish along with the mackerel. The water is warm enough for the wildcards from the south.

A FISHY LOOK BACK: My new favorite curl-up-with book is the 600-page “Tuckerton: A Newspaper History, 1852-1917,” compiled and edited by Steve Dodson, published by the Tuckerton Historical Society. It is an utterly mesmerizing somewhat journalistic look-back at the innermost lives and times of backbay folks, focusing most on the area from Tuckerton to Barnegat, though often looking over at “Long Beach,” better known as Long Beach Island. Dodson has managed to pull riveting reads from issues of The New Jersey Courier, Pioneer Newspaper of Ocean County. I hope to regularly pull throwback items from the book.

Exploring only a small section of the book, I came across these fishing-related reads. It’s hard to imagine so many sheepshead once roamed here. August 14, 1873: “Our bay seems unusually full of weakfish or sea-trout and sheepshead. A boat’s crew … caught ninety in a short time, a day or two ago. … Those fish are quite large, we saw one that measured two feet and  four inches in length. We saw sheepshead fish by the thousands few days ago. Feeding and leisurely swimming on or near the bottom of one of the deep channels in our bay.”

November 19,1874, West Creek: “Capt. Wm. Gaskill of Tuckerton caught the past summer, from about the 15th of June to the last of August, with hook and line, 548 sheepshead, averaging 7 lbs. in weight, each. … The Captain quit fishing for about two weeks before the season closed.” 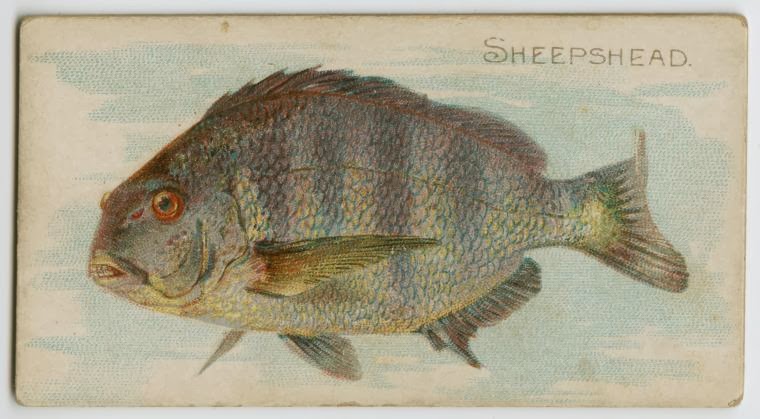 (I know the “gunard” were our sea robins but what the hell were “devil fish” and “sand pipers” – the latter of a fish variety. I might guess at devil fish being oyster crackers, or maybe stargazers. Sand pipers, thinking in terms of size, might cover panfish, like croakers, kingfish or spot -- though spot, aka Lafayette, were highly famed back then, a nickname like sand piper is highly unlikely. -- j-mann)

August 31, 1876, West Creek: “Now the blue fish that were want to sport in Barnegat Bay, have drifted down to beach and bay in vast quantities, so much so, that boat loads have been caught and thrown away during the past week. Markets at Beach Haven and Atlantic City were glutted with sheepshead and blue fish …”

“… The blue fish have averaged 8lbs. George Cox, of West Creek, caught forty-four blue fish in a day last week which weighed 327 pounds. Capt. Alonzo Kelly took a party of gentlemen from Philadelphia, Mr. List and brother, Mr Knight and Isaac Jones, outside the beach, after the fish. They bagged 50 blue fish, the aggregate weight of which was 400 pounds.

“Mr. Jones of the party caught a Spanish mackerel which weighed 14 lbs., the largest ever caught along the coast.” 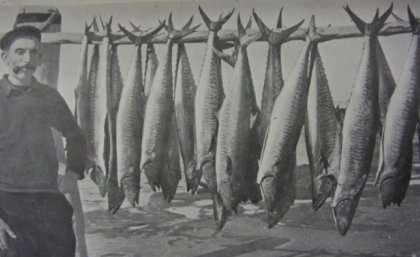 There are a slew of other fishing, oystering, clamming, hunting references in the book.

“Tuckerton: A Newspaper History, 1852-1917,” is available through the Tuckerton Historical Society for $40. It will also be available at The Tuckerton Seaport. All proceeds go to the historic society.