Thursday, November 21, 2019: Returning to fishing realm, we have exceptional weather for surfcasting ...

This week's "Why uncles shouldn't be allowed to babysit." 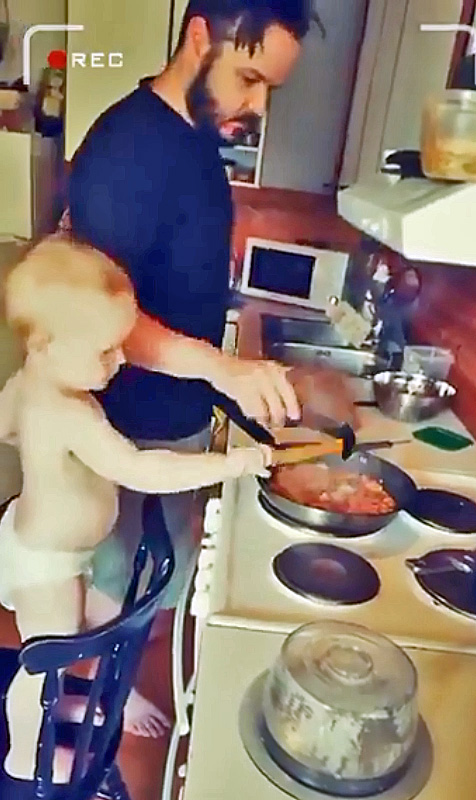 Thursday, November 21, 2019: Returning to fishing realm, we have exceptional weather for surfcasting along with boat bassing. Winds will get crankier. Tomorrow wind will be west to 25-mph gusts. It will be downright mild tomorrow. Far more seasonable by Saturday, when rains will move in for the evening.

Now to the fun forecast: We will see a lengthy stint of highly fishable conditions clear into next week. This is not to say there won't be some drips and dips in evening temps. Overall, it'll be typical fall fishing conditions. Also, watch for the first showing of some of those milder temps that should extend, off and on, into December.

We might eventually see some swells from soon-to-be Hurricane Sebastian.

Bob Beideman
Most came early in the day. All slots and a few just over 28”. Not to rough. The sun was out. It wasn’t cold and they caught fish. Good day. Here's the info on the upcoming ICW-NJ dredging, as seen in my weekly column at

NEWS-ABOUT: The long-partially-neglected intracoastal waterway (ICW) is now being federally dredged from Cape May to hereabouts. Scheduled for 450 days, the process will start at the far south end of the state, not necessarily working straight northward, concentrating on the more shoaled areas. The ICW in our zone is shoaled to heck and back, particularly just south of Little Egg Inlet – though the channel off Holgate is hardly smooth sailing, sailing vessels being a prime user of the ICW.

The lengthy channel dredging work, covering 60 miles or so, is being done by our own Barnegat Bay Dredging Co., which has the perfect-size equipment for the somewhat delicate ICW channel deepening. It will be dredged to a minimum of 6 nautical feet. OK, so maybe there’s technically no such thing as a nautical foot, though a nautical mile is 6,076.12 feet while a normal dry mile is 5,280 feet, so if you’re real good at math …

As to the placement of what will surely be a solid load of dredged material/sediment, I’m told it will first go to a place called Seven Mile Island. Yep, that has me head scratching along with you, as in “Where the hell?” I’ll try to find out its whereabouts, along with what it’s 7 miles from. I’m not sure where locally dredged material will go.

As to the Corps position on the placement of dredged don’t-call-them-spoils, those fed folks are thinking in positive ecosystem terms. In recent years, dredging and sediment placement activities have been used to, in ACE’s words, “help restore the coastal system and bolster system resilience.” Some of that sediment has gone toward supporting shorelines and marshes near Mordecai Island off bayside Beach Haven. “USACE continues to work with partners to dredge critical shoals while building habitat and restoring marsh on NJDFW lands,” reads its website.

For me, this rather far-reaching dredging job comes a bit out of the blue, though I’m sure the Corps put it out to bid a goodly time back. Usually, even the smallest of bayside dredgings garners a load of what might be called nitpicking attention, what green/blue environmental folks call due diligence – then make a Google rush to make sure they know what that even means.

Traditionally, every potential impact posed by a bay bottom stirring is micro studied into the wee hours, before being passed on for public perusal, reaction and comment. The lack of any state level or grassroots input hints that this project reflects a DC we-say-so supremacy. The entire ICW comes under federal jurisdiction. Also, the ongoing ICW operation and maintenance policy dates back to 1939. This grandfathered angle could further prevent Trenton or enviro groups from having a ton of say, or sway, over any of the dredging’s eco-impacts.

The NJ Department of Transportation, which manages the state’s portion of the ICW, is currently bouncing any ICW dredging questions back to the U.S. Coast Guard and the Army Corps of Engineers. The USCG is involved since, by law, it needs a reliable ICW channel to fulfill its Homeland Security requirements, and to conduct search and rescue operations.

For many a boater and bayperson, this deepening news will be very well received. The famed waterway, used by myriad mariners making intracoastal jaunts southward through Jersey’s bay waters, has long been in dire straits from shoaling. Mariner website captainjohn.org notes, “The NJ-ICW is known for its shallow waters, shoaling, winds, and tidal changes. If your boat has a draft of 4' or less, you will be fine. If your draft is 4' 6" it is often touch bottom and go.”

Another boating site, offshoreblue.com, advises, “(ICW) Channel depths are the proverbial fly in the ointment! Every effort is made to maintain a controlling depth of 6’ throughout the waterway, but due to continuous shoaling, depths of 3’ MLW may be found especially in the areas south of Barnegat Bay.”

One might question whether every effort is being made to maintain decent channel depths since the upcoming dredging will be the first such “effort” in these parts, dating back to who-knows-when times.

I know many a sailor – since sailboats greatly favor the ICW – who point to the ICW-NJ in Southern Ocean and Eastern Burlington counties as among the worst areas within the so-called Great Loop. Great what?

Per NOAA, “The Great Loop is a continuous waterway that recreational mariners can travel that includes part of the Atlantic, Gulf Intracoastal Waterways, the Great Lakes, Canadian Heritage Canals, and the inland rivers of America's heartland. Anyone who completes the journey is then named an official Looper.”

The Great Loop has been steadily gaining in popularity, with even the likes of kayakers and standup paddleboarders giving all or parts of it a go. Generally, the Great Loop is taken on by shallow-draft vessels, both motorized and wind-powered. It’s not an easy passage. One Looper captain said, “You gotta be loopy to try it.” Not surprisingly, among his list of loopy areas is NJ-ICW waters. Maybe not for long.

I write about science and nature, stargazing and eclipses. 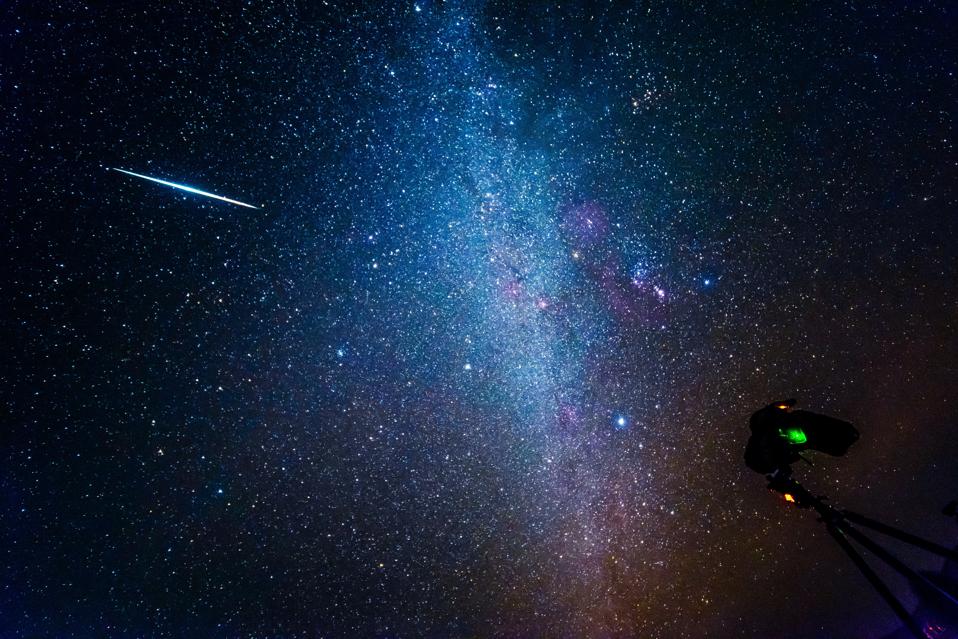 A brief and potentially spectacular meteor storm may see 400 shooting stars light up the night sky on Thursday, November 21, 2019. According to experts, the obscure and usually minor Alpha Monocerotid meteor shower could produce a rare “meteor outburst” with a duration of as little as 15 minutes and as long as 40 minutes.

Observers in Europe, Africa, South America and in the eastern part of the US will likely get the best view if predictions prove correct.

Here’s why, as well as exactly where, when and how to see the Alpha Monocerotid meteor outburst. Just hope for clear skies ...

What is the Alpha Monocerotid meteor shower?

All meteor showers are caused by comets, which leave dust trails that Earth smashes into on its orbit around the Sun. Most of them occur annually, and the comet that causes them is known to astronomers. However, the Alpha Monocerotid meteor shower is different. Astronomer do not know its origin, though it’s suspected to be a long-period comet that orbits the Sun around once every 500 years. There exists a narrow dust trails that Earth almost never encounters, but when it does, a meteor outbursts can occur. Astronomers know that Earth has encountered this stream before, and each time it’s produced a powerful meteor shower event:

It’s that “meteor outburst” of 1995 that November 21’s outburst looks set to most closely resemble.

Why is there going to be an Alpha Monocerotid ‘meteor outburst?’

The source for this prediction is a paper called “Likely Alpha Monocerotids (AMO#246) outburst on the morning of Nov...” on MeteorNews by Peter Jenniskens, a senior research scientist with the SETI Institute and NASA's Ames Research Center, and Esko Lyytinen of the Finnish Fireball Network. However, Bill Cooke at the NASA Meteoroid Environment Office has published an article in response that’s a little more pessimistic.

When to look for the Alpha Monocerotid ‘meteor outburst’

That translates to these times on Thursday and Friday for a sample of well-situated population centers in those regions (you should convert for your exact location and time-zone and check the time of local sunrise). I’ve left out locations west of Denver because the meteor outburst will take place below the horizon.

Dave DeGennaro
Back Bay Adventures
732.330.5674 cell
phillyfishingshow.com
We have an awesome stretch of W/NW winds coming from now through Monday if the forecast remains the same. This is the best wind. Flattens out the ocean and stimulates the fishing. Combine that with 40 to 50 degree air temps and this looks to be a classic bass fishing weekend. We might have to run north to catch 'em, but that's what we've been doing every week. Number one rule: Fish where the fish are. We are ready
to cast, jig, or troll. There is a big mix of fish from 20 inches to 20 pounds.
Sailing Open Boat or Charter:
Saturday Nov 23 and Mon Nov 25, 6AM to 2PM, $200 person, 4 people max, all fish are shared.
Also sailing Sun Dec 1 and Mon Dec 2. That will wrap it up for the Hi Flier this year.
Thank you everyone for another great season. I hope you and your families have a wonderful holiday season!
Dave
******************************************

. Talkin story about surfing in the ‘60s with my dad, what an amazing guy!

Boat With Hydraulic Suspension Reduces Seasickness
This suspension boat can help to eliminate seasickness. (Follow Tech That Matters for more).
It's called Nauti-Craft and it reduces the roll of the ocean using two hydraulic suspension systems that keep the boat steady during motion.
This is made possible by removing the boat's hull from the vessel's deck and the superstructure to decrease the vibration by up to 75 percent.
The system also betters the speed in rougher conditions, therefore, cutting costs by improving fuel efficiency. Nauti-Craft vessels come with a control panel that monitors the vessel and controls its inputs.
What do you think? 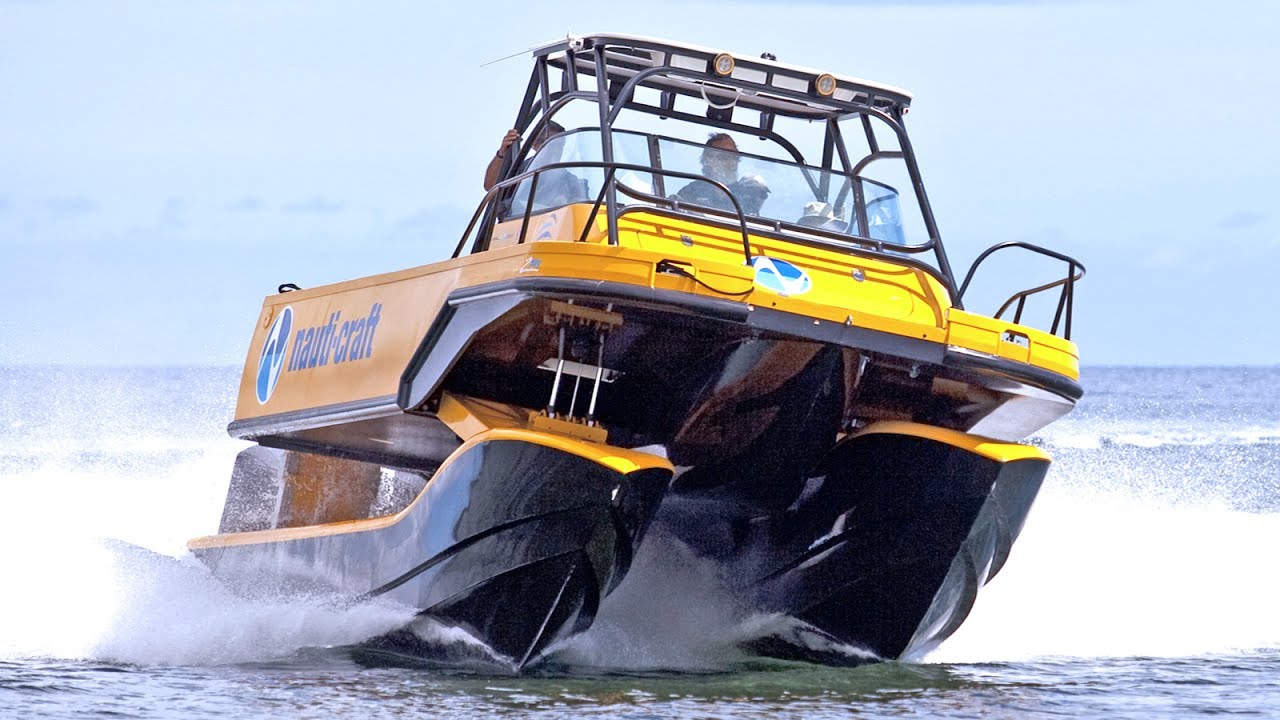 
Last week Environmental Police Officers from DEM’s Division of Law Enforcement responded to Point Judith to assist our federal partners from NOAA with a commercial fisheries boarding. Officers boarded an offshore lobster boat that had been fishing in federal waters to inspect its catch. During the inspection 116 undersized and 4 V-notched lobsters were discovered. Since this was a federal violation charges will be filed by NOAA’s Office of Law Enforcement. The undersized and V-notched lobsters were returned to the water alive.