Thursday, November 10, 2016: It gets no brighter. The air has been scrubbed clean via a very light rain and brisk northwest winds.

When a bird wants to freak-out a buddy ... Check out the look of the second magpie.

So, this hot chick accidentally saunters into a gay bar ...

Thursday, November 10, 2016: It gets no brighter. The air has been scrubbed clean via a very light rain and brisk northwest winds. With temps in the 50s and 60s for days to come, we’re onto a batch of near normalcy. The winds will stay west and get gusty now and again, through early next week. There will surely be a number of boat bassing opportunities with a.m. winds being the lightest. The surf waters have become a bit muddled. While the slight turbidity isn’t visually pleasing, it should make for improved plugging and bait-chucking conditions for surfcasters.

We need something to get the bass ball rolling. I still harbor this wavering hope that we’ll see big-ass bass before what should be waves of schoolies roll in – and stay on-scene clear through Dec. If you’re one of those folks who like to add a bass to Thanksgiving dinner, the chances seem good, providing you prefer a just-keeper sized striper (or two). Think clam baits – maybe even fished off a pompano rig – for 28-inchers. Striped bass doesn’t freeze all that well. I’ve often done it and short of using the thawed meat to make great fish cakes or even a casserole, it’s never the best look or taste when served whole fillets -- for those seafood lovers at the dinner table.

Below: This Martha Steward serving is interesting to me because those fillets are obviously from a much larger bass. 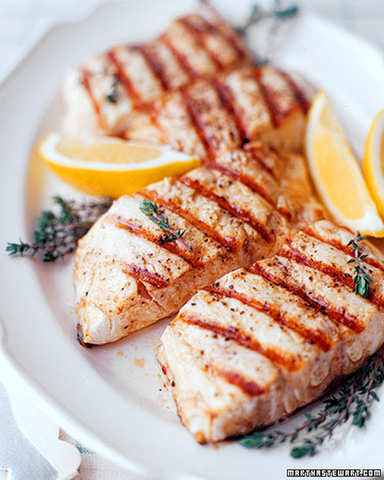 I bring up that “seafood lover” thing since it’s often a bit of a surprise, when hosting a Thanksgiving gathering, how quickly any seafood time(s) run out. I once bought 250 clams to a 10-person dinner – figuring I’d leave the surplus with them. Ha! They were all gone within 30 minutes, I kid you not. Yep, an average of 25 clams per mouth … poof. 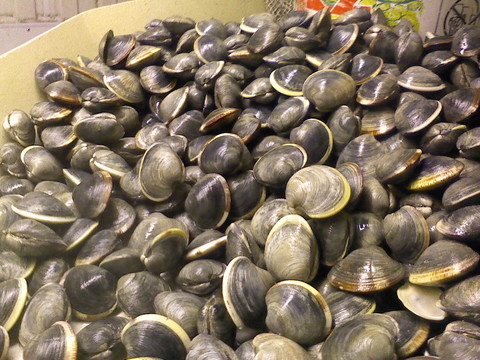 Very common question: How long do fresh clams last in the fridge?

I see absurd answers like "24 to 48 hours." Where do people get bogus data like that?! Live clams will last for well over a week ... easily. I'm not saying to do it, but I've stocked up on occasion -- and lost track of some in the fridge. I swear one bagful I found had to have been over 10 days. I steamed them; they all opened ... and were delicious. Again, I'm not suggesting using that time-frame as a rule -- the rule is always what opens -- but throwing away fresh clams because they're older than 48 hours? Nonsense. I will add that supermarket clams might already be a week or so in-transit -- or not kept chilled enough. They might be on their last legs.

IMPORTANT: The above opinion is based on clams meant for steaming, chowder or other cooking usages. Half-shell clams are always a crap-shoot. If going half-shell, your eyes and, most of all, the nose should show the way -- to mouth or trash. From jobs I've had at fisheries, the smell test is always the tell-tale test of all seafood professionals. And you don't have to have a trained nose to detect if a seafood product is off.

Just in case you're into it, the tissue of fish holds a chemical known as triethylamine oxide, aka (CH3)3NO. While that might sound bad, it's odorless and life-essential. However, when loosed through exposure to air, like when a fish is cleaned or filleted, it breaks down into derivative forms of NH3, what we know as ammonia.

That doesn't mean bad fish has a distinct ammonia smell -- or that it's good to use for window cleaning. It's the concurrent breakdown of other organic matter that climbs aboard the highly-diffusive ammonia smell.

During the few clamming days I’ve had this fall, I’ve noticed a good bycatch showing of NJ bloodworms. These are the exact same Glycera dibranchiate, the famed NE worms exported for fishing. They just run smaller. I’ll do a video to show some. I’m hoping local worms will be the ticket for dinner-worthy schoolie bass.

I don’t know if there are still kingfish in the surf. Now there’s some fillets that don’t go any further than yours truly. OK, so maybe a close friend or two can have a little taste.

I appreciate the goodly number of responses I got (emails and posts) regarding the lack of bass this year – and last … and the year before that. There is a slight majority voting for the replenishment being to blame – though the Electoral College has decided it’s the increased availability of bunker just off the beach.

Down below I mention the not-far-off arrival of schoolie stripers. That showing should be good in the surf. We’ll see. I’m into them so I’ll be close to any action, north and south.

I was told by sharpies that the night bite action is picking up on the north end. If there’s a 50-pounder to be had, it’ll either be night or predawn, which isn’t night. Ask all-nighter folks. Predawn can show long before daylight, first marked by stars fading.

Tom Rizzo: Hi Jay! Being a fisherman who has always had an affinity for the north end, especially what had once been the bar on 12th. street, I'd like to comment on what I've seen in the water. To start with, the bar is gone. There is a small one a few blocks away, but nothing like the structure that once existed between 8th. and 15th. streets. Now, it is mostly a flat plane. Equally as bad as the filling in and leveling of the area, the huge bed of clams is gone. Where once, there were always clams for the fish and other life to feed on, there is almost nothing to attract fish. When I scuba dived on nice summer low tides, I saw Kingfish, Stripers, Snapper Blues and baitfish swimming over, and around a bottom littered with clam shells being washed over the shallows by the water's movement. Gone are the roving clumps of mussels too. As you have experienced, anyone could cast far enough to have a chance at those fish biting a bait. Now, unless there are baitfish close to shore, or pushed in by Bass or Blues, there is almost nothing to attract Bass and Blues. Is the new south jetty to blame? I'd say that was one of the problems, but cannot discount pollution either. I'm not a scientist, but am a fisherman who's fished what was once a great area, and have seen it's demise. I also don't think we can put too much emphasis on this or last spring's run of large Bluefish as being proof that there is plenty of food in the water for fish to feed on. Those Blues were ready to eat anything, and for some reason, have visited the island's spring surf, in a big way, for the last two years. I would have a hard time believing they were there due to the presence of lots of bait in the water or in the sands. A part of me wonders if they've been closer to shore because there was, at least, something for them to eat. Was there nothing in the waters a few miles off the beach, bringing the close in run of blues to the surf zone? Basically, the north end all the way to Harvey Cedars is a flat beach with nothing to draw fish in to cruise for food. Where are those Sand Eels!

Today. Passing on a fun wildlife spotting in Long Beach Township (street in the 90s): A large woodchuck/beaver toss-up creature running across the beach and into the ocean. I'll wager it was a rare nutria ... a somewhat invasive super-rodent species; great swimmers. I'm running with that odd ID since nutria have been seen on LBI's bayside sedge islands for the past decade. What's more, a nutria (or two) had been spotted in the bay adjacent to were this one was seen by the caller. (Anyone else see it? Please get a pic or give me a call.)

Below: An example ... not the one seen. I have to go look for the local one. 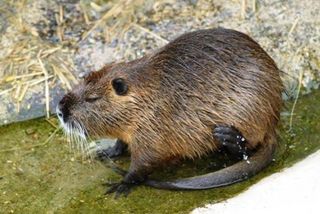