Another look at the 70-pound landlocked striper courtesy of Field & Stream. Check out the bizarre butterball build on this fish! http://www.fieldandstream.com/articles/fishing/2013/03/world-record... Below: Uncle Will''s Pancake House, Beach Haven. (Which successfully sandbagged against the water ...) 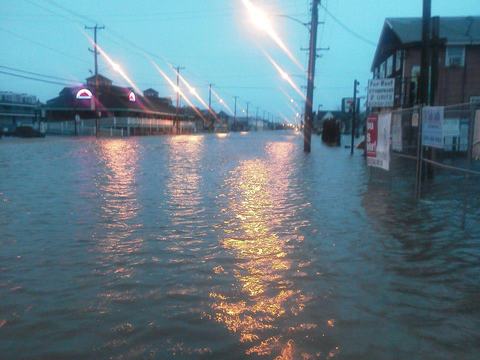 Thursday, March 07, 2013: Storm Saturn stuff: More and more meteorologists are admitting Saturn was a bitch to peg. Truth be told, they, themselves, might have also been caught up in the post-Superstorm syndrome, attributing a tad more potential to a fairly normal storm. They were surely erring on the side of safety, though you might have a hard time convincing folks in D.C., who took off an entire “weather emergency” day from a jammed political schedule. It ended up DC got a spritz and some gustiness – nothing they hadn't seen and felt from Capitol Hill. Above: Deb Whitcraft photo. Dock Road, Beach Haven. (Make sure to get your donations into the NJ Martime Museum  http://www.gofundme.com/NJMaritimeMuseum?utm_medium=wdgt, or go to its website at http://www.museumofnjmh.org/) 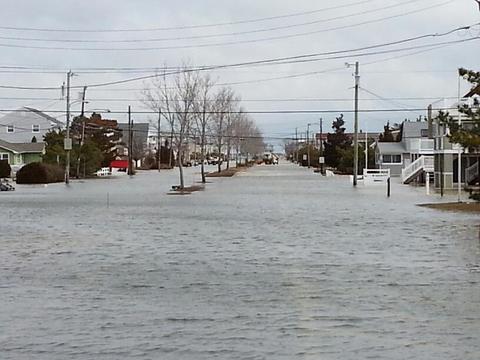 I had the luxury of going more on my past experience – anecdotal data. I wasn’t concerned with getting lambasted if I were to miscall and allow a major impact to go unprognosticated. I easily resisted seeing Saturn as anything more than a fairly typical winter storm, which is taking nothing from it. Even a run-of-the-mill winter storm is a nasty-ass, flood-producing meanie. It takes some utter ugly impacts to elevate a winter storm upward – to epic levels.

Today there were flood waters on the Boulevard, all the way across the road in some places. That is the hallmark of moderate flooding.

Note: Please remember that the “severe flooding” term should be reserved for flood waters literally impacting structures – and not merely structures adjacent to typical low spots. They flood with every T-storm.

I have no doubt that Storm Saturn was the most social media-ized weather system to date. Just in my Facebook range alone, I was informed, real-time, about every puddle that formed and every gust that rocked the rafters. All that input is great from a media angle. One minor (flooding) problem was the ways too many folks were over inclined to add high drama to more middling happenings. Many of those do not have a perspective on what major/serious flooding looks like. Advice: Save some drama room, so to speak. When a bona fide big one hits, you’ll all but snicker at what you formerly had thought of as severe.

There is an interesting manifestation of Saturn that brings Sandy back into focus, namely the complex and varied number of – for lack of better term – circumstances that must perfectly align to nurture the likes of a 100-year storm.

Personally, I remain sold on an essential flood element being the pre-stacking of water, bayside, prior to a big storm hitting. Admittedly, a large enough storm can stack tides its own tide -- within its own timeframe. That was the signature move of the Great March Storm, ’62.

Another huge flood factor, one that placed Sandy in a league of her own, is the direction of assault. The Superstorm bulldozed straight in from the ocean, driving a true storm surge ahead of her. As the term properly implies, a storm surge is a one-time wall of water literally being pushed just ahead of an arriving storm. Sandy was incorrectly saddled with two or three “storm surges,” a different one attached to each high tide. Technically, that’s impossible. You get one storm surge, per landfall. In some rare cases, a storm moves back out to sea and makes landfall again. Even then, just one official landfall storm surge.  That truly devastating series of tidal surges that came along with Sandy was just that, tide-driven rushes of water, attached to regularly scheduled high tides.

I even heard TV talk of “storm surges” with Saturn. Tweren’t none. She was out at sea, essentially moving away from land – though wound tighter than that proverbial cat in a rocking chair factory.  No direct hits, i.e. landfalls.