Thursday, July 11, 2019: We’re in the muck, h&h (hot and humid) wise. However drier air and lower winds are right around the T-storm corner

This captain is in total control of this seemingly insane move -- during a surfing contest much less. As to those in the boat with him, they will likely have something to say to him afterwards ... as they can be seen holding on for dear life. See the entire video. 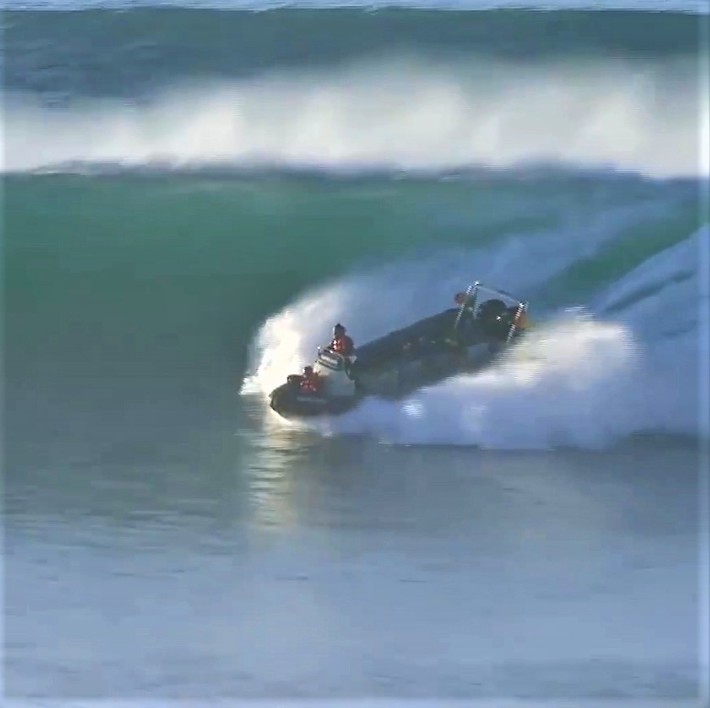 Young buck stops by to see why this beach is so popular ... 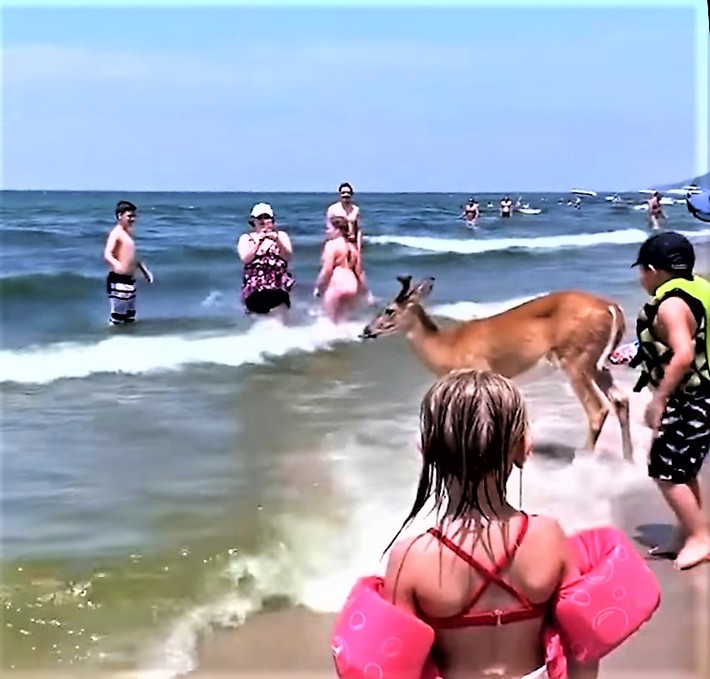 Thursday, July 11, 2019: We’re in the muck, h&h (hot and humid) wise. However drier air and lower winds are right around the T-storm corner. And it has been a rather dramatic thunderstorm season to date. That might take a short break for the last of the week but the sky is set up to keep the sudden boomers rocking the Casbah (bar and grill).

Sorry if it reads like a broken record but the number of kingfish being caught continues on a tear. As delicious as they are, they’re seldom targeted by commercial vessels, though their numbers are constantly wracked by bycatch from shrimpers. I won’t get into the bycatch mania except to say it will end no time soon, so we live with it.

Got this email: “Tried kingfish as shark bait and it works great.” The emailer also said the brown shark action has fallen off, though he hasn’t been skunked for many a moon.

Full moon July 16 so we should see some good shedder crab hunting. Yes, you can hunt them – at night using rechargeable beams. Look for them flush against bottom structure or intermingled with sea grasses.

Fluking has fallen; not off the table but on harder times. That doesn’t mean there aren’t a ton of them to target, they just might be taking feeding breaks -- or are selectively feeding, which Rutgers scientists have proven can happen. This weekend will once again see massive fluking pressure. Here’s hoping everyone keeps it clean and legal, size-wise. Release shorts as if they represent the future of the fishery. Regulation changing times come about all too soon.

Another smooth puffer made Barnegat Bay, though it was found as a washed up, DOA. It was just a few pounds. No signs of trauma. One thing that didn’t do in the fish was elevated bay water temps, even though they’re well into the 80s. These blowfish are amazingly tough that way. They tolerate toxins and lethal algae blooms way better than most, thus their burgeoning populations down south.

Small technicality that effects very few out there: Spear fishermen must have saltwater fishing license. It’s no biggy. Simply go to the NJ Saltwater Angler Registry at  https://www.nj.gov/dep/saltwaterregistry.

Congrats to the state/governor for passing a regulation allowing disabled vets to drive the beaches without buggy permits. Great thing … enough said. Welcome my patriotic friends and “Semper fi” to many of you. Now to look into fishing events doing the same.

SHARKLY STUFF: There was a recent hubbub over a shark sighting – and accompanying water clearing by lifeguards – down Ocean City (NJ) way. It was real. There are some sketchy photos of the shark, plying sudsy shallow waters, either taking predatory advantage of crabs in the rough water or possibly injured.

From the photo glance I got at the dorsal, it’s almost positively a four-foot brown shark, harmless as the day is long. However, I fully understand the guards clearing the water, under the one-in-100 chance it’s a nutso bull shark, a species negatively known for coming into shallows for an energetic bite-around, snapping at most anything that moves, including human appendages should they be available for a taste test.

During shark week, this expert re-tabulated his read on his research bull sharks. Look closely at the leg grab.

Look closely to see the calf caress by the attacking bull. Then the aftermath. As to why the reporter was smiling ... 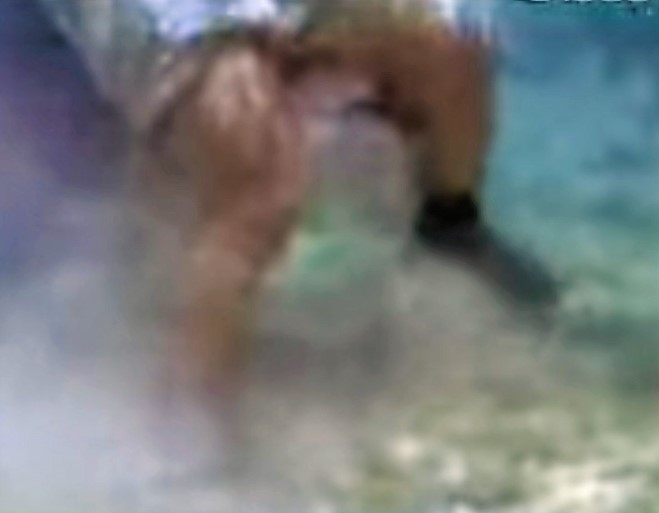 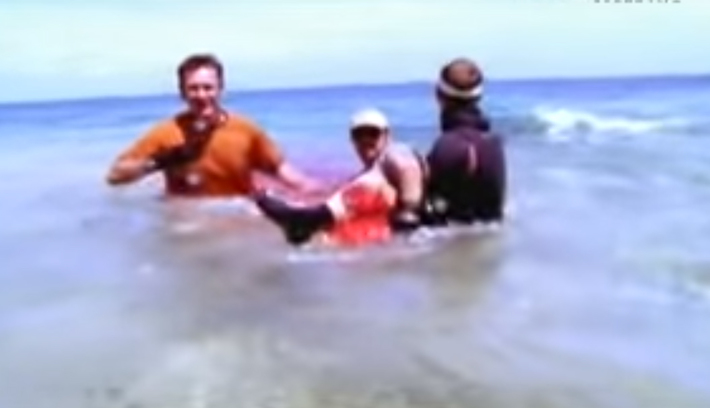 Giving bad credit where due, bull sharks are astoundingly fast and agile when it comes to instantaneously snapping at most anything it thinks might be even remotely edible. It’s a motto: "Bite everything and see what’s edible.”

As to the Ocean City sighting, I’ll re-reiterate that brown sharks are listed among most harmless of any of the larger sharks. They’re commonly targeted by shark-watching dive companies. That said, a wounded animal of almost any sort can lash out in an out-of-character way. There are also cases of animals losing it psychologically and lashing out, like a lovable-turned-homicidal killer whale did at a Florida theme park. Then there are numerous cases of show elephants one day just losing it and stomping every human ant within stomping distance. But I greatly digress.

As shark numbers mushroom – though it’s one of those slower growing mushrooms – sharks sightings in swimming waters will greatly increase. It’s therefore wise to exit the water should that immortal in-water word ring out “Shark!” – yelled for even a half-dead two-foot dogfish nosing about on the surface. Since smaller kids don’t always respond quickly enough to “Shark!” – often going with the “Oh, wow. Where?” maybe try “Ice cream!” Of course, you’ll always have that slow-processing skeptic who remains put in the water, all, “And why should I even be afraid of ice cream!?” Bull sharks count on those folks.

Another look as the brown shark ... and from whence it gets its name -- while being known technically as a sandbar shark.

Dave DeGennaro
Back Bay Adventures
732.330.5674 cell
phillyfishingshow.com
We ran offshore to the southern canyons on the Fourth of July with Dr Fred Leahy of Fanwood and my co-Capt Nick DeGennaro. We were rewarded with six yellowfin tuna, four of which were very small so we released them, and a 20 and 35 pounder for the ice. We also released two 70 lb class white marlin, one for Dr Fred and one for Nick. Two mahi and a big jack off of a lobster pot on light spinning gear. We finished up with a golden tilefish and a blueline tilefish on the drift. All in all, a productive day.
On Friday I had Wes Jensen from Phoenix, Arizona on board for a mixed bag of spinner sharks, bonita, blues, and Spanish Mackerel. The sharks we caught on the snag and drop on some bunker pods we ran into on the way to Barnegat Ridge. The bonita we trolled at the Ridge. The blues and Spanish mackerel were inshore casting lures. Good mixed bag.
Capt Nick DeGennaro doing battle with our first white marlin on a 30 class AVET LX and Trevala Rod: https://www.youtube.com/watch?v=FvDnvhrDiLw
Here's Capt Nick DeGennaro finishing up a 35 pound yellowfin tuna that hit a Zuchini Chatter Side Tracker Bar:https://youtu.be/vCvv7PihVAs
We have a perfect weather window coming up through the weekend and beyond. Storms are clearing out and calm seas are forecasted through Monday. We will be running Open Boat or Charter for Tuna: Saturday July 13 and Monday July 15 2AM to 2PM. $350 person. 4 people max. All fish are shared. We will be chunking, jigging, trolling, and casting.
Calling me on the phone is the best as I will be on the water more than the computer. If you are calling me on Saturday or Sunday, keep in mind I will be offshore and out of cell phone range until the afternoon when we return. Leave a message or call me then.
Pics:
Capt Nick DeGennaro with a 35 lb yellowfin tuna that hit a Chatter Side Tracker Bar

Carl Hartmann shared a photo to the group: American Angler.

Go and get them boys and girls. King fish seem to be everywhere

@riley_cooper22 had a fun afternoon with gmom and pop pop. A bucket full of blowfish!

Big Seabass this morning! We had 5 total keeper seabass up to 2.5 lbs but it was the fluke that took the pool money
Come fishing with us tomorrow you may wind up with a nice bag to take home for dinner

Cody caught this 20” 3.88lbs fluke off the beach today using white gulp. He was fishing on the surf this morning under Connor Smilon’s guidance. Way to go Cody!

First time out on a boat (8hr Bottom Fishing) and he wins the pool.

All smiles , life is short u gotta live ,,watching note book not sure this is a good idea

Tim Brindley out of BL had pulls with literally hundreds of pounds of ... sea robins? WTF!?

This is the star of the swamp. #northernsnakehead fishing #summer #southjersey