Thursday, January 30, 2014: Holgate’ Rip gets no freakier. It’s a sight unseen for many moons – as in decade moons. The break-up of the bay ice is showing like it does up in the Tundra. The break-up might  be a sign the ultra-bitterness is over? Hey, the bay might have an instinct when it comes to end times for polar vortexes.

The west side of Holgate is downright freaky. Check it out:  https://www.youtube.com/watch?v=Qp8usA8txHk&feature=youtu.be Did make an odd find on the Holgate beach. A few gorgeous smelt had washed in. These were the huge winter smelt, common to Massachusetts winters but very rare hereabouts. Looking a bit like a toss-up between a mega-spearing and a smallish herring, these very tasty buggers like the cold. They’re big enough to fish for in New England. The ones I found today could have been caught on hook and line. A couple of them were still a wee bit alive so I chucked them back in. They just floated. I then thought I should get a photo but they were too far out. I think more might be coming in. Believe it or not, they might have been stunned by huge chunks of ice crushing around in the waves just off the beach. How weird is that for an NJ winter. And I do have videos of that. See https://www.youtube.com/watch?v=ECXL3m8Z7xA&feature=youtu.be. 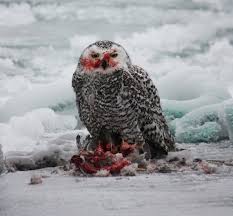 Saw a Snowy owl annihilate a black duck near the back cut – over on Not Tuckers Island, across the cut. First time I had ever seen one in action. It glided in, no wing action, and “Bam!”. Seeya ducky. The huge owl – and they are getting almost overlarge in Holgate – then flew the fairly heavy prey back over to the vegetated dunes of Holgate. Those owls are one strong-ass bird. It adds veracity to that e-photo of an unknown type of owl grabbing then flying off with a live cat.

By the by, if you’re thinking of buggying the front beaches, don’t. The snowed over beaches are not only loose and sinky but frozen over there but not over. You’ll be driving along and bust through the frozen sand and into the loose stuff. Bad news. Until you can fully see the sand again, either stay off the beach or get quickly to the wet sand near the ocean. Even when on that wet sand, you have to get back across the beach and up an exit. Tough sledding.

$25 at the door without reservation

Interesting. I'm surprised no icebergs have ever been seen in these latitudes with a winter as cold as this. I remember 1976/77 that one was historic. And after all, the Titanic hit one at 41. Well.

How exactly do you prepare a smelt for consumption?