Thursday, January 01, 2015: May you have a happy new year … though I’m not promising anything, mind you. Hell, just imagine having an entire year of nonstop “happy?” Where would you put it all? Your face could break from smiling all the time. Just sayin’. Which brings up the proverbial New Year’s resolution thing. What’s with that? A year changes and just like that folks suddenly want to reinvent themselves, often without thinking it through. It’s like the concept of making a better mouse trap, not recognizing that all a better mouse trap leads to are smarter mice in the future. I will admit that I unerringly make a granite-hard resolution every single New Year’s Day. This year is no exception; as of midnight I’ve resolved to hereafter and with great faithfulness break the habit of writing “2014” on all checks and documents, upgrading to “2015.” Hey, it’s better than resolving to become a kinder and gentle person in 2105 – until that jackass in an SUV cut you off this morning and your resolution runs for its life in the face of shouted words lacking any semblance to kind and gentle. Maybe next year, right? 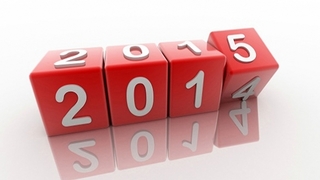 BUGGY BANTER: The beaches have been catching vehicles like flypaper. The sand is deep and loose of late. Yesterday there were three bog downs in less than two hours in Holgate. In the holiday spirit, I pulled out a couple barely-stuck folks. A smaller, all-wheel-drive SUV-ish vehicle was hopelessly mired, fully bellied down on its chassis. More of a car than a SUV, there was absolutely nowhere on the vehicle to attach a tow rope – without risking yanking off either the entire front or back end of the vehicle. After some persuading, the owner grasped the notion that a $250 professional tow fee would be infinitely less money than having something go catastrophically wrong during my trying a power pullout. Get this: A few years back, a truck buggyist nice-guyed a stuck vehicle using a tow rope. He ended up pulling the bumper clean off the stuck vehicle. Shortly thereafter, he got what amounted to a bill from the lawyer of the guy who had been stuck, suing for compensation. Gospel truth. It happened on LBI. Yes, he paid it … mainly because he had to leave for Florida and didn’t have the time to fight it. I didn’t hear how much it cost. Brutal.

Because of that incident, I now first ask some strategic questions when offering to TRY pulling someone out. “Hey, if something goes wrong, you’re not going to hold me responsible right? Promise? Cross your heart and hope to, uh, get the shit kicked out of you if you try??? With my dashcams going, I have real-time proof of such a gentlemen’s agreement. Also, that potential snafu is exactly why I recommend to both buggyists and stuck people to opt for using tow companies, i.e. do as I say not as I do – something I can say an awful a lot.

Below: The worsening overwash area of Holgate. 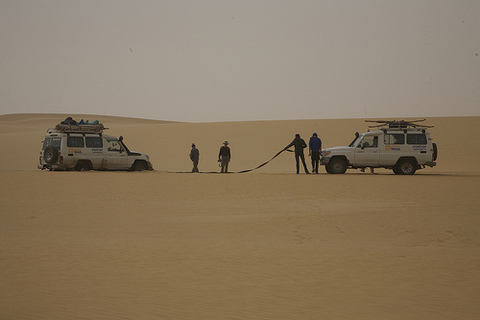 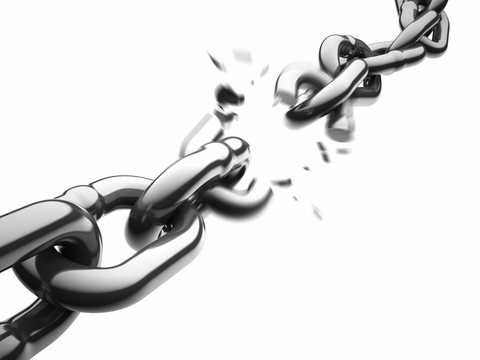 By the by, I use a wide, yellow geotextile strap for power-pulling. It’s easy to see as it goes taunt and has tons of strength. Most importantly, it does not go deadly should it suddenly break. A chain reaching its limit and snapping can do hideous bodily harm to both vehicles and any nearby humans. I’ve never see that happen but the horror stories I’ve heard are enough to keep me using textile straps during power pulls. Chains and steel cables aren’t nearly as dangerous during a slow manual or machine winching processes -- or during come-along pulls. 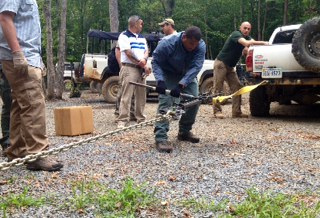 Obviously, I’m a lot more at ease with truck-on-truck pullouts, using the tow hooks attached to both vehicles. I’m also interested in trying my brand new five-ton come-along winch. That method is far-and-away the safest and surest – albeit somewhat slow – way to extract even a fully ogged down vehicle. Here’s a video I made last year using a come-along. 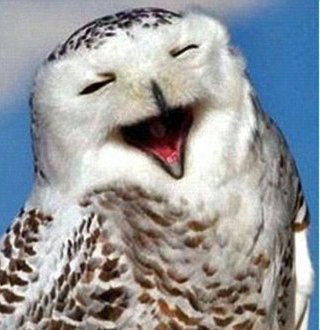 I take loads of videos and photos. Many shots seem as if I'm intruding on nature. Not so. I often use my video cam to take still photos, using its reach-out capacity. When I'm seemingly right on top of scenes -- and birds -- the final looks I publish are fully deceiving. Here's a quick peek at one of my videocam's look/see capacity. Sorry for the blur at the beginning.