Below: Compliments of the North Dakota Tourism Council's "Things to do in January" booklet.

Thursday/Friday, December 10/11, 2015: The ocean has been showing pure glass in the a.m. This is what boaters are hoping for over the next few days of freaky mildness.

Winds will go from south (Friday) to SW over the weekend. The sea temps have actually gone up; Mid-50s if you can believe that. The air temps are even freakier. El Nino may or may not be the official cause of this weirdness (see below).

I had been predicting the mildness but wasn’t seeing temps nearing 70. The thing is the big patterns (jet streams and such) are even more firmly entrenched now than when I was doing my earlier forecasts -- and predicting a way-late start to winter ... in ever. Yes ... if ever. The surf fishing pressure is very light – to say the least. One angler per LBI mile is understatedly “light.” That emans there are plenty enough skate to go around. Again, it’s rare to do a bait session without wings showing up at line’s end. How anyone can mistake the underside of a skate for an “angel” look is beyond me but I’ve heard it referred to as such. OK, so maybe some sort of weird angel. 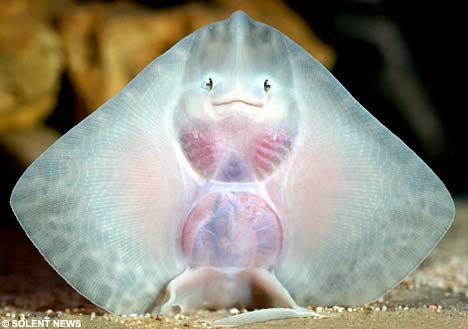 Remember the song lyrics: "The thigh bone's connected to the face bone ..."? Me either. Still, ya gotta love the he-men of soccer.

Here's a weird one for you, as in Weird Ocean County. This is out of Manahawkin. You know the world has crop circles and sundry odd geological formations. But, we have the mystery of the just-discovered (by me) Manahawkin Marsh Scribblings. Below are aerial photos of them, in the marshes just north of the famed Road to Nowhere. Perhaps it isn't "nowhere" to the extraterrestrials who have used our marshes to message other interplanetary travelers to the inhabitable nature of Earth. These ARE NOT retouched.Make sure to click on the pics to see a closer view.Many are well over a football field long. By the by, some folks think these are mosquito ditches. "Mosquito ditches" is exactly what the government wants you to think these cosmic Earth-based extraterrestrial space messages are all about, located solely in the marshes of Manahawkin. They were first code-named "mosquito ditches" by the earliest government researchers, upon pondering photographs taken by air balloon in the late 1800s, long before the easily-seen straight-lined mosquito ditches were built half a century later. The straight-line ditches were meant to give the impression man-made mosquito control efforts also created the interplanetary hieroglyphics. Where's your heads people?! By the by, "X-Files" returns this January with both David Duchovny and Gillian Anderson re-inhabiting their roles as iconic FBI Agents FOX MULDER and DANA SCULLY. Last year we were rudely introduced to the Polar Vortex. This year it might be the Arctic Oscillation (AO), which could be making a far larger splash, locally, than El Nino -- though the later is still a major player by my thinking. You'll read differently below but the that read of what could provoke the question of what came first El Nino or a sequestered AO?

... Mike Halpert, deputy director, NOAA’s Climate Prediction Center, told reporters that the amounts of tropical rainfall associated with El Nino so far across the east-central Pacific and all the way to eastern part of the Pacific have been less than what was seen in other strong El Nino years like 1997-98.

“There is significant difference between this event and (19)97 as well as 19(82). We’re not quite sure why that is,” Halpert said.

“If you look at the ocean temperatures, we know it’s warmer in the western part of the Pacific than it was during these other strong events but it’s actually a little cooler in the eastern part,” he said. “I think the reason why, at least at this point, the patterns have not been as strong has to do with the fact that the eastern part of the basin is warm – it comes out as the third warmest - but is significantly cooler than what we saw during (19)97 and (19)82 as well. ”

Halpert also said El Nino couldn’t be blamed on several weather trends of late, including storms and heavy rain that have hit the West Coast, record heat in Florida or the unusual warm conditions in the Northeast that are expected to see temperatures reach 60 degrees in New York City this week. There also has been a lack of snow across the region, including no measurable white stuff in Buffalo – breaking a 116 year record, according to The Associated Press.

Rather than El Nino, Halpert said the heat-wave of sorts in the Northeast can be blamed on the Arctic Oscillation (AO), which influences the number of arctic air masses that penetrate into the South and nor’easters on the East Coast. This time around, a positive Arctic Oscillation along with a strengthened polar vortex have shifted the jet streams to the north and trapped the cold air in the polar regions since early November.

Related: What does El Nino mean for travelers?

“While it has certainly been mild across the country, it’s not really something we would attribute to El Nino,” he told reporters. “The AO is probably playing a bigger role this time.”

But for Californians desperate for water, Halpert cautioned that the El Nino-inspired weather should be coming soon.

“People are wondering where the rain is. Don’t panic,” he told FoxNews.com. “The time when we are really looking for the rain is after the 1st of the year. We still expect January to March to be wetter than average throughout the whole state.”

I'm looking at this call with great interest since all I've been doing is taking sundry surface reports from loads of weather computers and aligning them with historic patterns back in the days when similar El Nino’s were in place.

Interestingly, the weather prior to the intense monitoring of El Nino is now being studied to determine whether an El Nino might have been in place – based on that weather. That is helping estimate (very) long-term patterns of El Nino to see if the likes of climate change are effecting historic patterns of both El Nino and La Nina.

That begs the question of whether climate change could be intensifying El Nino, as might be happening this year – emphasis on the “might be happening.” This insane micro-managing of global climate – and equally insane predictions of what is coming – is counterproductive to properly battling the ugly abuse of our atmosphere. Such mismanagement employs (and markets) scare tactics more than devising healthy noninvasive remediation – and possibly cures -- to what ails our skies, seas and lands. Returning to the upcoming winter, the rigidity of the Jet Stream assures odd non-winteriness well into January. By the same token, all it takes is one massive winter storm to drive the Jet Stream southward and possibly lead to its assuming a more normal winter “dip” pattern. Again, nothing like that is on the horizon based not only on short-term forecast but looking back , historically, to when the other similar El Nino was in place.

With the New Jersey boat show season fast approaching, there's good news coming out of Trenton for those looking to make a purchase in 2016.

On December 9, 2015, New Jersey Governor Chris Christie signed a new law that cuts the sales tax on boats sold in New Jersey by 50%.

Guess where this guy is going?
Philadelphia City Hall !!!!! For an exhibit in honor of the Society of American Mosaic Artist Convention in Philadelphia.

Thank you to the jurors of the Creative Art Council of Philadelphia!
And again...thank you to all of my friends and family that inspire and encourage me.

Well two of us caught our limits and two of us struggled a little bit. With
Thomas Siciliano,
Thomas Ramagosa, and
Kyren Dooley.

The girl's got it. We got on an amazing bite of small bass on Sunday. Caught dozens from keepers to little guys and Ginger was on them from start to finish! Her first wide open bite with birds wheeling, bass busting and great light tackle fun. She was even bringing them into the boat, unhooking and releasing them herself. Pretty soon I can just stay home and she can take the boat and do it all by herself. 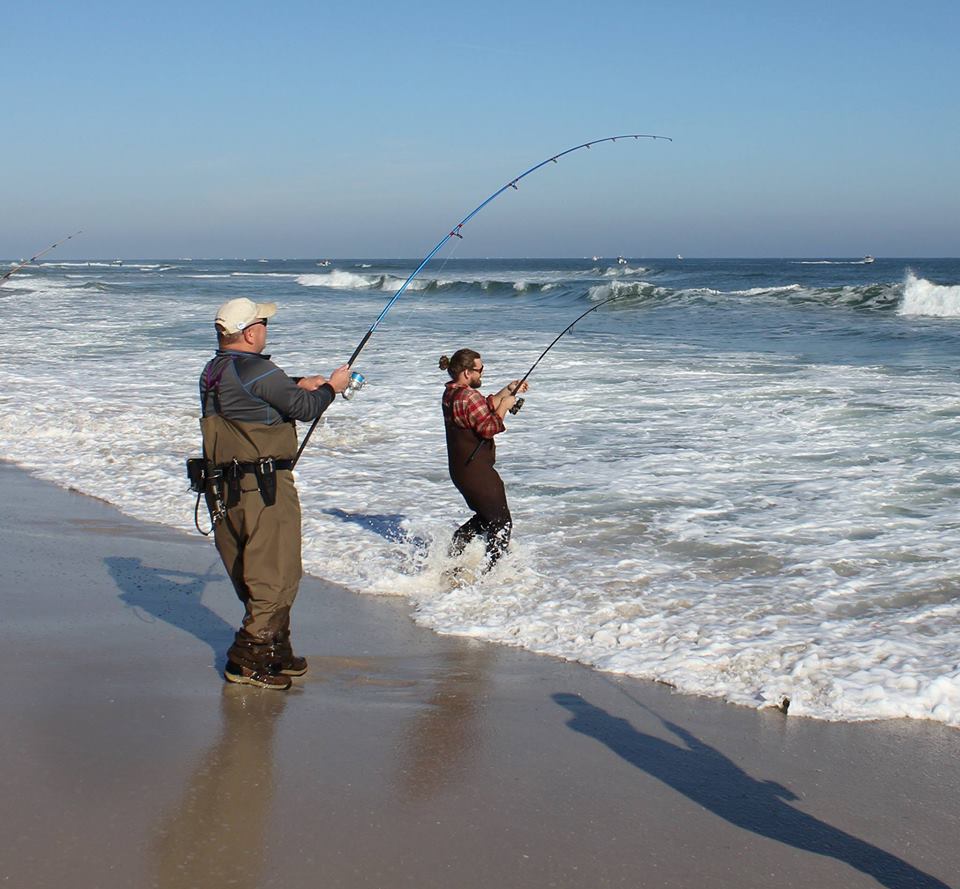 We just launched our new line of fishing shirts and sweatshirts: Psyquatic is our brand name. Our first two designs are just off the press and ready for Christmas. Choose between our Striped Bass or our Psyquatic logo designs. Available in 5 sizes, Medium to 3XL. Short sleeve, long sleeve, and sweatshirts. All quality garments and knockout graphics that are worth a look at:
www.psyquatic.com

They will also be on display at our table at the Barnegat High School Fishing Flea Market this Saturday, December 12 from 9AM to 1PM.

Another way to find custom plugs, or get into contact with those who  make them, is fishing flea market. And dang if we don't have a fine one this coming weekend.  I would strongly suggest homing in on Barnegat High School Fishing Flea Market, Dec. 12

Angling for a holiday gift for the fisherman in the family? Check out the Barnegat High School Fishing Club’s 7th Annual Fisherman’s Flea Market on Saturday, Dec. 12, from 9 a.m. to 1 p.m.

The event, held at the high school, features new, used, custom and antique items such as rods, reels, lures and more.

Admission is $4. Children 12 and younger are admitted free of charge. All proceeds benefit the high school’s fishing club, comprised of students in grades 9 through 12.

Door prizes – lures, tackle, rods/reels, headboat passes – will be awarded every half hour.  Those interested must be present to win.

“We always get great support from local anglers, businesses and our community,” noted club adviser Brett Taylor. “Last year we packed the house, and were able to give away $1,000 in scholarships to students of the club, (and) help offset the costs of the club’s fishing trips. … So please come out and support the students of the fishing club.

“Plus, it is a great time to stock up on fishing gifts before the holidays.”

Traveling from North Jersey (heading South on the GSP): Stay on Garden State Parkway and take exit 67 Barnegat.  Bear right onto Lighthouse Drive and come to the stoplight (WAWA will be on your right).  Make a right at the light onto West Bay Avenue and at the 3rd light make a left onto Barnegat Blvd.  Follow Barnegat Blvd (you will pass the Collins school/Brackman school on your right) and make a left at the 2nd light onto Bengal Blvd.  Follow Bengal Blvd and make right into Barnegat High School – follow the signs.

Traveling from South Jersey (heading North on the GSP):

Stay on Garden State Parkway and take exit 67 Barnegat.  Make a right onto West Bay Avenue and at the 2nd light make a left onto Barnegat Blvd.  Follow Barnegat Blvd (you will pass the Collins school/Russel Brackman school on your right) and make a left at the 2nd light onto Bengal Blvd.  Follow Bengal Blvd and make right into Barnegat High School – follow signs.

The Barnegat High School Fishing Club gets ready for their trip aboard the Carolynn Ann III..

The mid 1990's saw NO snowfall. How do I know this ? My daughter rarely got to go sledding when she was a child. Nothing unusual here. There was one winter when we had the equivalent average temperature of  Richmond, Virginia. I remember Accu Weather talking about it. Now today, I hear the insanity of some talking head stating climate change is slowing down the Earth's rotation.