Below: Every one of these ducklings was rescued, per the longer version of this video.

Thursday, February 25, 2016: The not-nice weather is taking its good old time exiting. I did some serious woods time today, digging … and seeing a coyote walk on a seldom used dirt road less than 50 feet away. Coyotes look pretty bulky this time of year, well coated, as opposed to the mighty scraggly look of spring.

For treasure folks, I had a slow day though I did find a couple very nice possibly Murano, Venetians of even African beads. They were from a necklace so there should have been more but I dug slowly and couldn’t find the graduated beads that went with them. I might sift-box the site tomorrow. While they still make beads like these, I know the ones I found today date back over 100 years. That makes them cooler ... and energized. 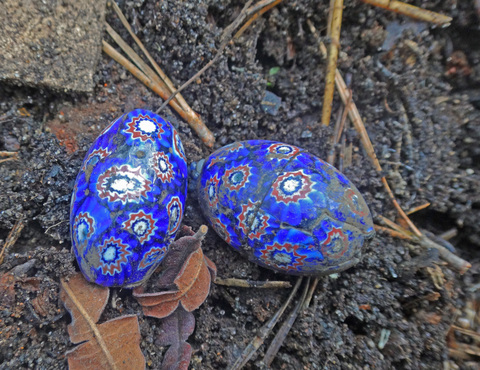 I also dug this ... one of many I've found over the years. It's lead. I'll let you guess. Hint: Hunters will know immediately. 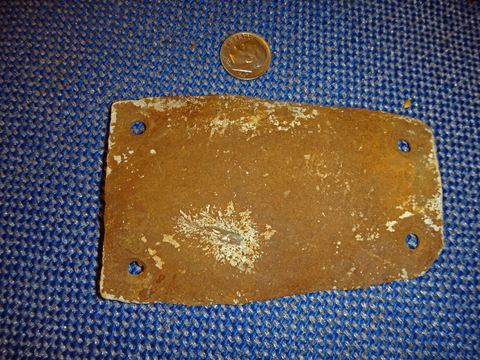 It's going to be a fine weekend for winter visitors -- mild but way windy. We'll see some serious blowout tides for clamming on Saturday. We'll be on the waning side of Monday's full moon so the tides won't be overly impactful but the SCA with gale gusts is going to blow the bay way out. Low on Saturday is late afternoon so clamming window will be excellent, beginning at 2 pm.

I've gotten a lot of feedback on the possibility of Little Egg Inlet sand actually being used to replenish LBI beaches. Almost all the comments are positive. There are some folks who somehow think that the sand in the inlet will be off-color. That, of course, is nonsense, especially when considering the odd coloration -- and texture -- of some of the sand being pumped in from the ocean borrow sites.

Any sand from inside Little Egg -- including/especially the shoal areas -- will be such a match to existing LBI sand that you won't be able to differentiate it from in situ (in place) sand.

That said -- and knowing full well that beggars can't be bitchy -- I am worried that getting too deep into spring might disrupt arriving (and departing) migrators. However, unlike clams and such, finfish should easily be able to sidestep (so to speak) the dredging pipes, which actually go downward far more than laterally.

Not that it matters one bit, but my treasure side can't help but realize there could be some serious  goodies sucked in from the bay. Right now, the sand sucking is well out there, yes, it found the munitions but they were purposely dumped off the beach a thought-significant distance. Sand taken from the shoals, or inside Little Egg Inlet, will positively be loaded with as much as 200 years of history. Yes, there could be Hardy Boys-like "gold doubloons and pieces of eight." If nothing else, think about how many fishing sinkers will be deposited on the beach. Me and my metal detector will be able to retire. That's a joke, son.

By way of trivia. Old manifests used to dub eight peso pieces (pieces of eight) as PS or P8. Soon, the two were combined for convenience.  The look that resulted is from whence cometh our dollar sign: $. Yes, there is also the US version of the dollar sign origin but it falters under historic review. The peso/8 concept predates the dollar, significantly. I recently came into possession of this fascinating piece of paper history. It fits in well with the recent Holgate/Tucker's Island buzz.
It's a May, 1939, letter to "Captain Everett Salmons" of Tuckerton from Colonel F.B. Wilby, of the then-Corps of Engineers, Division of Engineers. Significantly, it comes via the War Department -- which, to me, is historically telling. The country was about to go to war. Within months of this letter a presidential order would demand a doubling of the size of our Navy and enact a "peacetime" draft.

The letter is the denial of Capt. Salmons' requested action regarding Beach Haven Inlet. I see the denial being based more on a building war-preparation federal budget than the suggested cost-to-benefit ratio. It's not a stretch to then surmise that WWII is why the south end of LBI is the way it is ... the last unfettered inlet on the Eastern Seaboard. 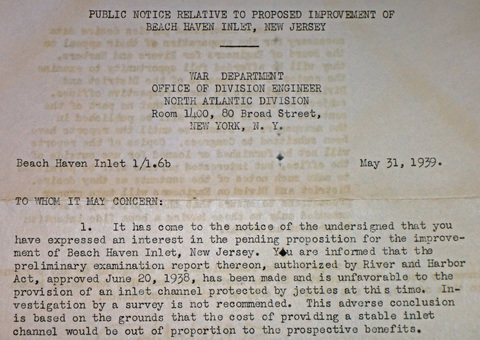 Here's the rest of the letter. Nothing of import. 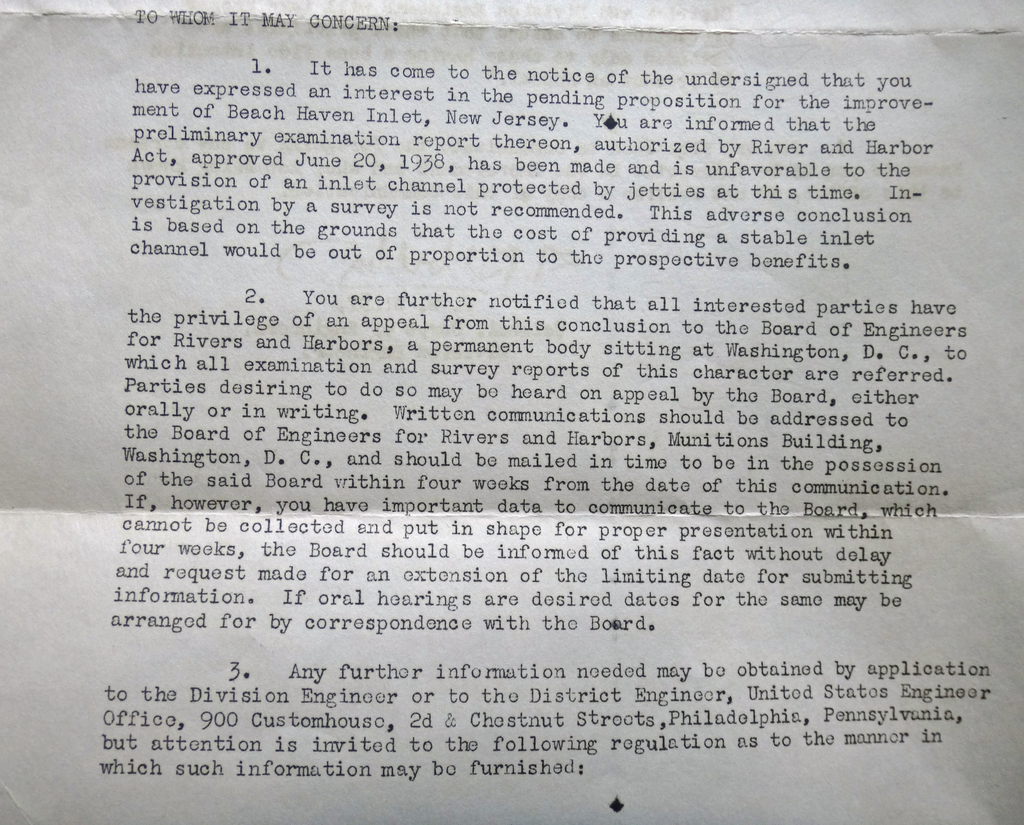 Hutch's latest ... Make sure to click in on it.


Close up look at the blended color Semper Fleye. 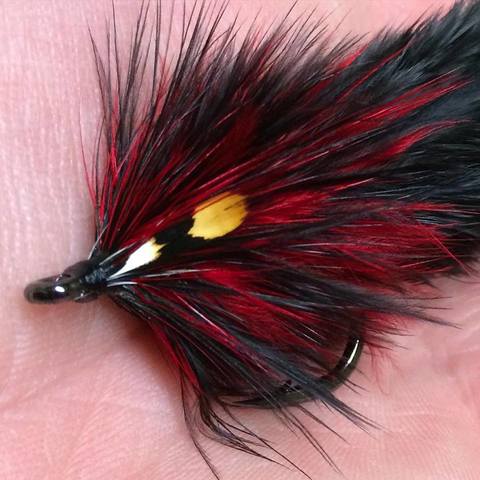 DONE!!!! original where my heart was and only thing being changed is the shel position to replicate the form of the a , OVER!!!! DING DING DING LOL

Guess who's spawning in a bay near you? 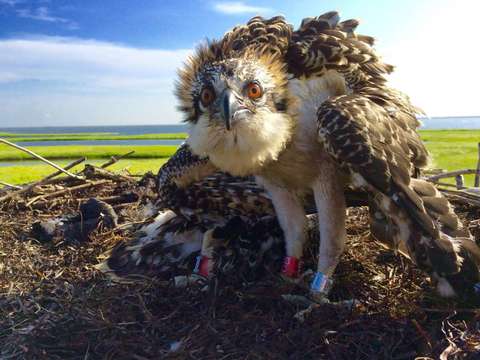 DOWN THE SHORE  A BLOG BY JUSTIN AUCIELLO

Highlights of the 2015 Osprey Report, which provides the number of nesting pairs, active nests, and nest productivity for the raptors throughout New Jersey, include 534 active osprey nests (up from 420 in 2014) and nearly 600 pairs (up from 567 in 2014).

Of those, 423 known-outcome nests fledged, or produced birds able to fly, an average of 1.74 young per active nest, and nearly 80% of the population was surveyed. The surveyors found 31 new nests.

"A sample of each major colony is checked and nest outcome data are used to determine how well our ospreys are faring," said CWF Habitat Manager Ben Wurst. "In general, New Jersey ospreys are doing quite well, continuing a trend that began five years ago."

Only 50 osprey pairs remained in the state during the early 1970s.

From the Meadowlands south to Cape May and west along the Delaware Bay, 432 young were banded by volunteers and staff with United States Geological Survey leg bands for future tracking, according to the report.

“Ospreys are an important indicator of the health of our coastal ecosystems, so it is important to track the health of their population. Their continuing recovery is a very promising sign for our estuaries and the fish and other wildlife that depend on clean water to survive,” said CWF Executive Director David Wheeler.

“Today, no visit to a coastal waterfront would be the same without the magnificent sighting of an osprey soaring above or crashing down to the water’s surface for a fish," he said.

The Friends of Island Beach State Park organization is currently fundraising to replace its osprey cam in the state park. Click here for more information.