Thursday, February 09, 2017: If it was perfectly predictable, it wouldn’t be called whether … uh, better make that weather.

When it really pays to be a lousy shot. For non-sports types ... he's shooting at wrong basket.

Latest addition of "He seemed so much smarter at the pet store": Thursday, February 09, 2017: If it was perfectly predictable, it wouldn’t be called whether … uh, better make that weather.

A zig here and a zag there and we get off easy … if easy is what you’re looking for in a low-snow way. I always put in a sympathetic plug for the folks trying to pay off that truck-front plow. Hey, don’t rage on me for simply passively siding with low/no snow thinking. I have no power over the heavens, at least not like the skiing and school-going types who pray for snow. Maybe they should volunteer at church a bit more.

One of the main snow killers this go’round was the tenacity of the rain before the turnover to white. I showed a solid .48 inches of rain, which would translate into about six or so inches of snow. At the same time, the intensification of the storm over the ocean didn’t play out quite as predicted, missing its prime over-ocean detonation point – to our local advantage. Face it, the beaches sure wouldn't have liked another gouging ... nor would the public works folks.

I again get to buttress my now monotonous point regarding how quickly storm systems have been moving through our area, going back as far as 20 years now. I have no doubt there is something bigger in play with this one-and-done storm tendency. If I were to venture guess, it has to do with an interplay between the rapid intensification of storm systems, due to the energy intake from the warmer ocean-surface waters, and the enhanced rotation common to such an intensification. The atmosphere, through the west-to-east Coriolis effect, now more rapidly transports the highly-energized system, westward.

While having nontropical systems move through our area more rapidly might sound like a good thing, in the long run it has drought written all over it.

A swing and a miss for me was my prediction/expectation that we had seen the last cold of the winter. While I stick with a very mild late winter and spring, this odd storm will usher in nasty-ass wind-chills tonight and tomorrow.  Here’s hoping we got enough snow to protect those too-early flower blossoms, though most early-flowering bulbs are bad-asses, nail tough Hollanders. 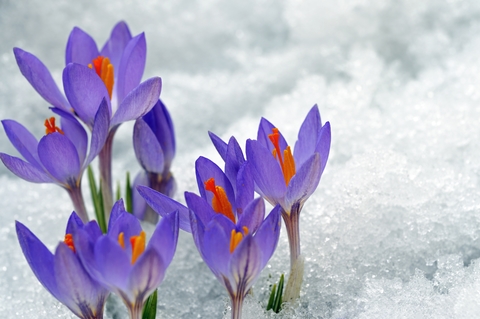 I had noted how early we'd be hearing thunder this spring but I wasn't expecting the winter storm type rumbles we heard this a.m.

Following its Gilroy Garlic Fries success, McDonald’s of the Bay Area is testing another regional favorite: a Crab Sandwich.

Believed to be a first for a fast-food chain, the sandwich features snow crab blended with seasoned mayonnaise and diced celery, served with tomato slices and romaine lettuce atop a toasted sourdough bun that’s been brushed with herb butter.

“We wanted to test our own take on the beloved crab sandwich,” Nick Vergis, McDonald’s Co-op President for the Greater Bay Area, said in a statement. “We’re excited for our customers to try it and share their feedback.”

McDonald’s regional favorites campaign is a nationwide one, with company managers testing dishes and ingredients they think will sell in various locations. For example, a Pesto Mozzarella Melt was put on the menu in Southern California and a bratwurst promotion was offered in Wisconsin.

If the Crab Sandwich passes muster with customers, it could be sold in 250 McDonald’s in the greater Bay Area later this year.

The NJ Department of Environmental Protection's Division of Fish and Wildlife will host three unique, hands-on outdoor programs this spring and summer that are designed to introduce adults and youth to the natural beauty and wildlife of Barnegat Bay.

First, the Division of Fish and Wildlife will conduct a free 2-day Hooked on Fishing-Not on Drugs (HOFNOD) training April 28-30 in Waretown (Ocean County).

HOFNOD is a great way to introduce youth to fishing and their local waters and other natural resources while supporting positive outdoor recreation activities and life skills. The program can be used by most organizations.

For more information or to register for this program, visit www.njfishandwildlife.com/news/2017/hofnod_train04-17.htm on the Division's website.

In addition, the Division of Fish and Wildlife and its partners are offering for teens three exciting summer programs based at the Sedge Island Natural Resource Education Center, located off Island Beach State Park in Barnegat Bay.

These unique, educational and fun programs include fishing, research and field experiences in a beautiful location.

For information, please visit www.njfishandwildlife.com/sedge_summer17.htm on the Division's website.

Finally, the Division of Fish and Wildlife, in partnership with the Conserve Wildlife Foundation of New Jersey, is offering a 3-day 2-night locavore program for adults interested in learning what's edible in and around Barnegat Bay.

The program will be held on August 11-13 at the Sedge House, a renovated ducking hunting lodge with 7-bunk rooms where participants will live a conservationist lifestyle.

Participants will spend time identifying and harvesting edible plants, algae, digging clams, netting crabs, and fishing, all while learning about the salt marsh ecosystem, conservation, and renewable resources. For more information view the page and/or flyer linked below:
* www.njfishandwildlife.com/news/2017/baytobowl17.htm
* www.njfishandwildlife.com/pdf/education/baytobowl_flyer17.pdf