Thursday, August 21, 2014: (See proposed ASMFC striped bass regs below)  Gorgeous again. Oh, we’re being spoiled. Of course, more than few of you are in-office or on-site meaning we’re really not cashing in on the near perfection. I will break away to take in some late-day jetty casting. I haven’t been slaying them but I’ve been getting in a nice dip. You know the water is just fine when I take a swim.

The fluking remains torrid for many. I had two reports of folks maximizing their allowable catches. Wow.

Phone call buddy said, “This is the first time in years that I limited out.” His largest was a sweet. five-pounder. This same angler does NOT believe in combined bags within his boat, something illegal, though … . He had two other folks who were well below their bags but all he did when he caught another fluke was cull it out – or release it. That’s admirable, at least to me. I will note that he got his doormat after he had reached his limit. H then traded it out for a smaller model in the live well. “It swam away just fine.” I can see that. Fluke are actually survival bulldogs if not mishandled. I once caught one in Holgate, threw it on the beach as I fished  a bit more, and later went to wipe the sand off it at the water’s edge (Holgate cut) and the damn thing took off. I saluted it.

I saw a very fine photo (shown here) of one of the small groupers now being taken on hook-and-line in Barnegat Inlet and also from the docks near Morrison’s. This one was clearly a snowy grouper. I’m guessin’ that’s seven or eight that have been caught over the past few weeks. They’re all small, though one was maybe 10 to 12 inches long, per the angler. His sounded like a gag grouper – or, similarly, a grey snapper. A number of these groupers were simply described to me, since all have been caught and released. Juvenile grouper are one of those fish that look the exact same (shape) from young to old, though the coloration of the young is ultra-vivid, as seen in the pic. 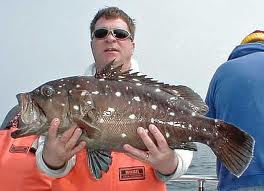 The most amazing fish for looking exactly the same from hatching through old age is the northern kingfish. I’ve seined them one-inch long and they’re the spit’n’image of a five-incher, 15-incher, etc.  For fun, this time of year you can nighttime spotlighting in shallow bay waters and see tons of tiny kingfish, which lie perfectly still on the bottom.

Speaking of night spotting. I’m a bit of a flashlight/spotlight aficionado and the advances in these essential lights are amazing. LED models that fit in the palm of the hand are easily bright enough to night spot in shallow water. Some of the larger models (normal flashlight size) are now brighter than the huge handheld spotlights I used to use. Hell, there are now headlamps that can shoot a tight beam over 300 yards – three football fields. Oh, you might not want to look directly into those beams. One flashlight I have has a beam that actually can melt plastic at ten inches away. I kid you not. https://www.youtube.com/watch?v=0v29-KEhiAg

Another one. This thing is a beast:

Bluefish are out there but primarily targetable around Barnegat Inlet. I’m not getting many bluefish report from Little Egg Harbor; however, those waters are holding some jumbo croakers. I know I wrote this before but a fellow (builder) up from North Carolina – and still fishing up here – said he has never seen croakers so big – and croaker fishing is big in NC. I rate their meat as good, not great. They’re still very fun fare, especially when breaded (spiced crumbs) and sautéed or deep fired. Fresh chunks can make very decent bait for bass and blues. Strips are above-average fluke baits.

Artwork below: THE DINNER BELL - Striped Bass by Mark Susinno 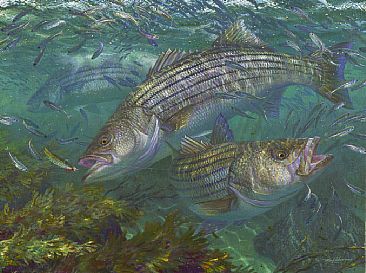 Striped bass, also known as rockfish in some areas, is not currently overfished; however the ASMFC is proposing a suite of three optional cutbacks in the recreational and commercial harvest based on concerns the female spawning stock biomass is falling below a benchmark level.

The ASMFC draft addendum containing these proposed cutbacks will be discussed at public meetings scheduled this month and next along the U.S. Atlantic coast range of this fish and including Chesapeake Bay

The draft addendum proposes new fishing mortality (F) reference points, as recommended by the 2013 benchmark stock assessment, and associated management measures to reduce F to a level at or below the proposed target within one or three years.  It responds to results of the 2013 Atlantic striped bass benchmark assessment indicating  F in 2012 was above the proposed F target, and female spawning stock biomass (SSB) has been steadily declining below the target since 2006. This means even though the stock is not overfished and overfishing is not occurring, SSB is approaching its overfished threshold and stock projections show SSB will likely fall below the threshold in the coming years. In addition, a similar decline has been observed in total harvest.  In response to these factors, the Draft Addendum proposes management options to reduce fishing mortality to the target level.

Check out this insane sharkiness ...

TBT some pix from a tournament on brigantine June 1985. I caught a 36"bluefish that weighed about 10 lbs, skinny spring fish. the tourney only counts length so it was the biggest fish. It held to the last tourney of the year and a walk on caught a 36 1/2" blue. there went my $1000.00 bux.

Would like to say congratulations to all the Jr Mates on their completion of the 2014 BHCFA Jr Mates Program and say thank you to all the Captains for their time and dedication to the program and to the Jr Mates and their future in sport fi
...
See More

— with George Gilbert and 9 others.

Wishing the best to our co-worker Billy Mcmullan this week as he goes in to kick cancer's ass. We love you Billy.

Hey there buddy! Some yellowfins and a bigeye last night.

One short fluke and a 10 min battle with a ray. Beautiful day at the beach : )

The National Fisheries Institute responded critically to arecommendation from Consumer Reports that tells pregnant women to avoid canned. The suggestion is a direct counter to the FDA's recent decision to set a minimum seafood consumption standard for pregnant women, women of child-bearing age and young children.

According to the NFI, Consumer Reports' analysis flubs the facts surrounding safe seafood consumption and is a detriment in promoting the many health benefits that seafood brings when it is included as part of a regular diet.

Following is the NFI's full response:

Consumer Reports is set to publish a recommendation that pregnant women avoid all canned tuna, advice that flies in the face of more than a decade of independent, peer-reviewed, published science that resulted in the Food and Drug Administration (FDA) updating its advice to pregnant women to eat more fish, including canned tuna, to realize the health benefits for baby and mother.

NFI warned on June 25 that Consumer Reports was gearing up for another tuna story and it’s disappointing, but not surprising, that the group has produced yet another tuna tale with a disproportionate focus on mercury and out-of-step nutrition recommendations.

With hyperbolic scare-stories rife with misinformation, Consumer Reports continues to marginalize itself and ends up at odds with the larger group of legitimate nutrition and public health experts.  More evidence CR should stick with advice that doesn't’t have the potential to harm unborn babies: reviews of stereo equipment, their core competency.

Though we urged CR to do a thorough, balanced and science-based job, that obviously did not happen. Minimal research would have presented reporters literally hundreds of independent seafood studies from the FDA to the World Health Organization that clearly demonstrate the net benefit gained from eating seafood, like tuna.

While it’s convenient and doesn't’t take much thought or understanding, publishing a “report” that ultimately harms the health of pregnant women and children is irresponsible.

If you are interested in this report, please keep these notes in mind and feel free use the National Fisheries Institute as a resource.