Thursday, August 20, 2015: Once we get through muggy and potentially T-stormy weather ...

"And if you look out your side window, you'll see the aircraft seemingly exploding ..." 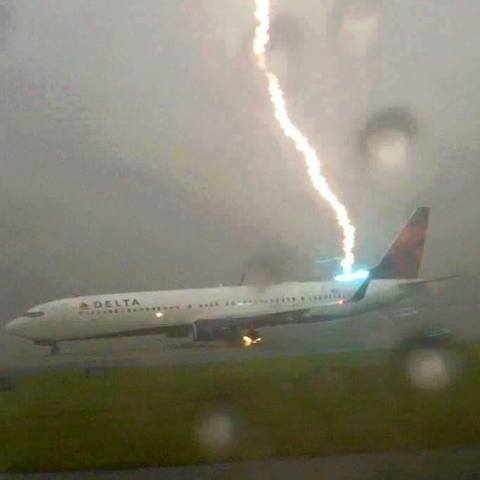 Sorry, I'm not if sure there's a size limit on these ... or if they're endangered. When in doubt ... throw it out.

Thursday, August 20, 2015: Once we get through muggy and potentially T-stormy weather through Friday, we get into a light north wind pattern that could knock HHH (hazy, hot, human) temps down a bit. Then we go into a period of normalish temps and non-eventful winds for much of next week, with some cool night temps.

It should be noted that some tricky storm systems off the coast will likely be far enough out to miss us but it’s always tricky when lows are that nearby. If nothing else, I see some medium-period groundswells making the surf a tough go. Also, there will be some NE winds hard enough to add to the surf. Anyone heading offshore needs to closely watch the maritime and oceanic weather maps.

I know I’m now writing this daily but the black drumfish count in the bay is remarkable. I bring it up as a bit of an invitation of hit some bayside street ends (perfect for kids) and throw out some bait. Ask the nearest tackle shop to set you up to fish for these panfish-sized drum. Polly's on the Dock

Make your reservations now for our third Crab Smash . This Friday and Saturday @pollyonthedock Polly's Dock

Email from  a buddy of mine:

"If you are interested, I heard from one of the local commercial crabbers that things have made a turn for the better. I remember you wrote about this earlier in the summer. It was bad. But he said it came all of a sudden and the little crabs shedded out. All No. 2s, but they are there now. I took Archie and my nephews out Sat and we did pretty good too."

Below: I'd love to think every deer is Bambi-ish and harmless ... but it just ain't so. When overpopulated, deer are an eco-system ruiner of the highest order, more so than most other species. Due to their size and ability to impact vegetation -- and other creatures in the ecosystem -- too many of them can lower the boom on eco-balance.

Along with being the purveyors of disease-carrying ticks, they can get downright aggressive toward other creatures. I have seen deer intentionally hoof endangered pine snakes to death.

On the human front, the vehicle strikes of deer -- or accidents where motorist swerve to avoid them -- have reached epidemic proportions. Hey, I'm the first to place wildlife over humanity but it doesn't do the deer any good to be maimed by a vehicles to then crawl to the side of the road to slowly die.

I do want to debunk the notion that over-populated deer starve to death in winter. Absurd. They can survive off winterized plants and grasses if need be. What's more, nearly 75 percent of all NJ deer now live within walking distance of humanity, which means they have nonindigenous grasses and shrubberies to down throughout the year.

I should also mention that green groups and animal-friendly organizations fully agree that too many deer are a very bad thing, ecologically. While they hate the concept of hunting, their "birth control" methods just don't work.

Below: This ancient lithograph shows deer have long gone after snakes: 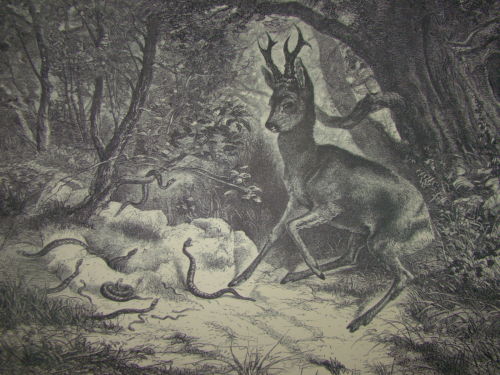 Below: Deer attacks family pet ... I realize this is "nature" but it shows these aren't the kindliest creature on four hooves. 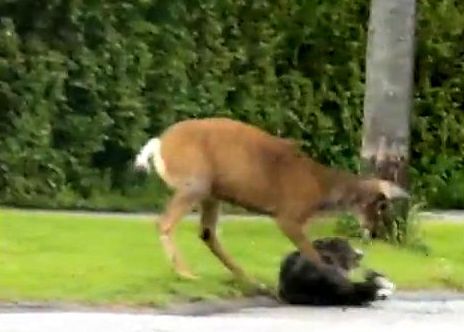 Animal experts in one Bergen County town say hunting is needed to cull a deer population that has reached "critical proportion."

Stripers Forever is carrying the fight to save wild striped bass into Massachusetts as we believe it to be the pivotal state in the game fish regulatory process. We have an active Political Action Committee (PAC) fund, and bills have been drafted, sponsored and filed for consideration. Stripers Forever volunteers and our professional lobbyist will work with the legislature to gain support for these bills. We'll also continue to meet with the administration as well as regulators in the promotion of game status for wild striped bass. We believe our message is right and strong and we will eventually prevail.

But let’s be clear: winning this fight takes PAC money! Massachusetts is our current focus and winning here is an important step toward universal game fish status.

In 2012 Stripers Forever established a separate political action committee (PAC) fund for Massachusetts. This fund is currently being used to make direct contributions to candidates who have the most potential to legislatively advance our conservation goals. PAC contributions are recognized and appreciated by legislators as credible proof of our dedication to conserving wild striped bass and are the most effective political options available to us in our legislative efforts. Our message is being heard, but we can do even more with your support.

Massachusetts is a critical state in the fight to conserve wild striped bass. When we succeed here, we will have tipped the balance in favor of game fish status coast-wide. But if we are to be successful in building a coalition of state senators and representatives from across the state that can carry the day and save striped bass, we need your financial help.

Stripers Forever is an all-volunteer organization, and membership is free, but effective legislative advocacy is not. Please consider making a special contribution to our Massachusetts PAC so that our voice will be heard loud and clear in Massachusetts and eventually coast-wide.

Please make your check payable to:
“Stripers Forever Political Action Committee” and mail it to:

If you have any questions, please email or call Dean Clark, MA Co-Chair, Stripers Forever: seaflycapecod@gmail.com or cell: 508-769-9765

Thank you for your support.

The boats of the Beach Haven Charter Fishing Association are experiencing a steady improvement in the local summer flounder action. The inshore wrecks and reefs are providing increased numbers of keeper almost daily.

Captain John Lewis reports that his new boat, “Insatiable,” is performing well and was booked solid last week. He is seeing daily improvement in the inshore fluke fishing and was especially impressed with young Max Capatides boating a 23-inch beauty.

Captain George Finck of “Sparetime Charters” has also been finding some nice fluke. He had the Beth Catania family out on the reef fishing, and their day was topped with a 24-inch flattie.

Captain Ray Lopez had a group made up of Bob Hass, Miss Fran, and Bill out for a day of fluke fishing on the “Miss Liane.”. Despite catching a wide variety of fish off Island Beach State Park, they were unable to land any keepers. Another day he had father and son Andrew and Maxwell Goldman out to several inshore canyons looking for tuna. Despite a beautiful day and plenty of signs of life, they were unable to hook up. Even the lobster pots seemed devoid of mahi-mahi. Maxwell did land a nice sized bluefish on one of the flat lines.

Captain Jimmy Zavacky had a banner day on the “Reel Determined recently with a total of 10 keepers. Another day his party caught 5 keepers with mackerel strips being the hot bait. On Sunday he had the Cocillano family who fished a half day trip and caught 4 keepers to 25-inches. At one point they landed three keepers within 5 minutes, all on Gulp.

The captains of the BHCFA participated in a memorial event last Sunday at the Little Egg Reef in honor of Captain John Koegler who passed away last winter. Flowers were placed on the water, and Captain John’s family was impressed with the love and respect shown toward John. His name will live on as the Junior Mates annual fishing trip will now be known as the John Koegler Memorial Fishing Tournament.

Been catching lots of tropical fish seining off LBI lately. This is a striped burrfish.. also catching baby spotfin butterfly fish, blue angel fish, lookdowns and sea horses. Trying to catch a lion fish heard they are also around. 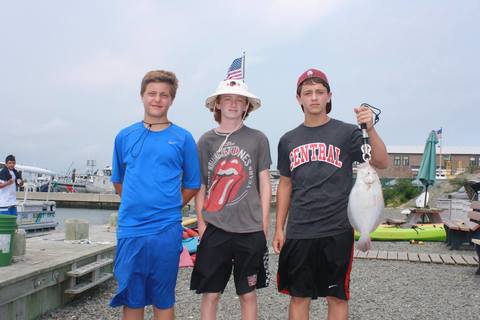 I had Sonya Matthews of Flemington, NJ along with her son Christian, and his friends Kevin Giles and Ben IIvenna on a 4hr Bay & Inlet charter. We had a little bit windier and tougher conditions than the day before which impacted our drifts. The foursome still managed over 20 fish, but only 1 keeper (19 in). This was Ben's first-ever keeper fluke. Nice job! And they got a special treat because it was USCG day at station Barnegat Light.

successful finishing yesterday on our last day of summer!!

Almost that magic time, mullet will be flooding the surf soon!

I believe in the power of an almighty God who is both just and terrible in his wrath: America’s least favorite gathering of startup dorks on MDMA is swarming with a plague of nightmarish, biting bugs.


Meet the "Shit Queen of Burning Man," Commander of 1,400 Porta-Potties

If you ask most Burning Man attendees what the annual MDMA and enlightenment mecca is about,…Read more valleywag.​gawker.​com


From the official Burning Man blog:

You may have seen the bug rumors on the internet. We are here to tell you that they are all true. Well maybe not all of the rumors, but the bugs are real. They’re everywhere. They bite. They crawl all over you. They get up and in you.

Twin Peaks, who’s leading the construction of the Center Café, was talking about how bad they are when she jumped a little and pulled her t-shirt away from her body. A good-sized green bug fell to the ground. It had crawled into her bra.

Metal Shop Heather wears a welding mask most of the day. Bugs have crawled up inside her visor and nestled around her eyes. Cammy and Stinger needed some help from the medical team to deal with the infestation; Stinger’s back was covered with nasty red welts from the bites.

What’s worse: being covered by crawling, gnawing bugs, or camping in the desert with someone named “Stinger”? It gets worse. The bugs are unstoppable:

What’s going on? We don’t know. We don’t know how the little critters survive in the heat and the sun. All we know is that if you pick up some wood, you’re likely to uncover hundreds or thousands of the things.

I’ll answer that question with this series of tweets depicting the Biblical horror of anyone who visits Burning Man 2015:

It’s going to take a lot mescaline to cancel this out.