Below: For humans, bad things happen when your only exit strategy is to try running on air. 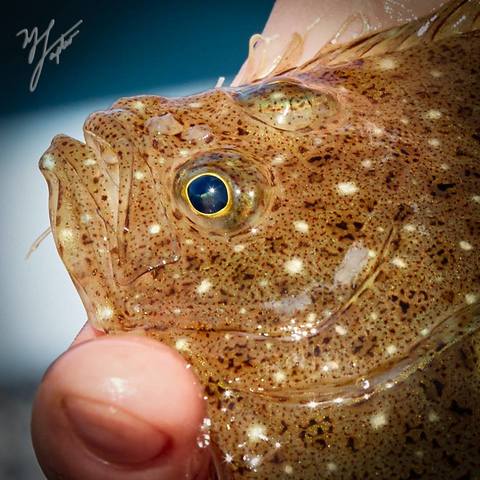 Thursday, April 28, 2016: It’s one of those half-and-half days, Dang decent morning and now spits aplenty. The rain shouldn’t be enough to knock serious anglers off their mark, especially with the frenzy fishing for bluefish – which will get even fair-weather types raingearing up and rushing toward the inlets and, to a lesser degree, the beachfronts.  I’m doing beachfront.

I got my first “insane” reports -- as in “the fishing has been insane.”

The insanity has all been bluefish-based, though I once-and-again get word of an occasional very sweet bass. One photo I saw was 27 pounds (kept) and another was even larger (released). Oh, there have been many other bass taken by boat, the two mentioned above were surprise catches during bluefishing sessions. 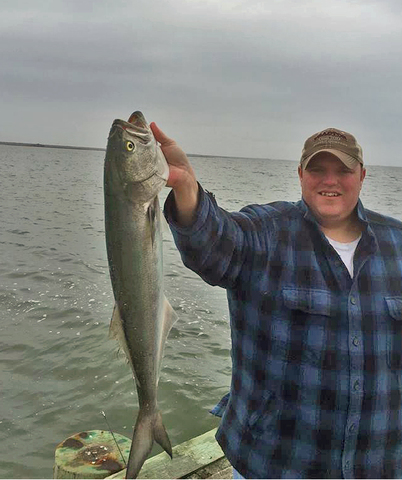 As is always the case when bluefish are head-banging every whichaways, everyone swear they have the perfect plug, jighead or technique. And they do - for the bluefish moment. I have overloaded bags of ratty plugs I sacrifice to the blues. All the hooks have pushed down barbs for easy removal --- from MY skin.

HOW MANY/WHERE?: I'm wondering about shad fishing. I'd like to try it over in the Delaware, so I checked the regulations -- and got a good bit confused.

Firstly, there is a 6-fish bag limit ... shad of any size. That sounds fine until I read further along in the regs and saw, "Not more than 3 American shad in Del. Bay, River & tributaries. OK, that sounds kinda strict but still quite understandable. But, then, the final part of the regs reads, "No American shad in all other waters." WTF!? Where exactly does that 6-fish bag limit apply? Note especially the 3-fish limit applies to Delaware River and "tributaries." WASTE NOT, SPEAK NOT: I knew it would happen but I’ve gotten no fewer than half a dozen whines – rightful in at least a couple cases --- about poor keep etiquette with the big blues. I was emailed three separate photos of slews of blues lying around with little effort being made to hold their freshens in for cleaning. 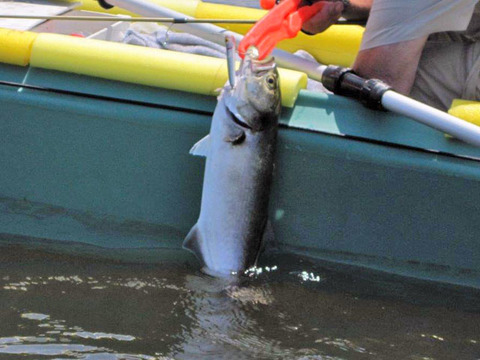 It was a second-hand report that had a heavy-keeperage angler saying he actually had no use for all the fish he was keeping and was going to give them away back home -- or use them for fertilizer.

Growing up, bluefish racks were often used as fertilizer. That’s not at all that common any more. However, the old “I’ll give them to my neighbors” thing hasn’t waned at all. The thing is, I know that only so many neighbors want big blues, especially uncleaned. 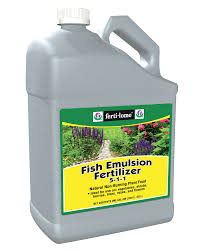 In the very same breath – and no it’s not a counterintuitive breath – I say keep as many blues as you have good usages for – up to the legal bag limit of 15 fish, daily. In fact, my making bluefish jerky and/or smoking actually uses a lot of fish for not that much final product – though what a delicious final product. 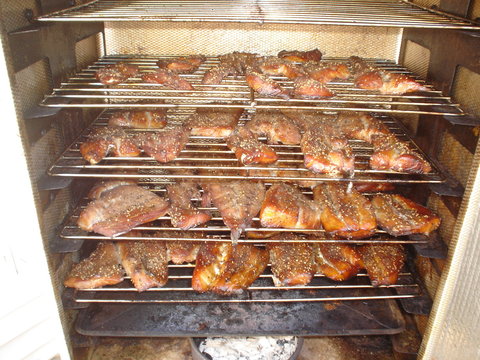 My ongoing word of warning regarding recourse when it comes to abusers is to not go at it alone -- say, by walking up and pointing out a thought-abuse to the thought-abuser. I learned long ago that bad things can happen, i.e. positively don't mess with angling Asian ladies. 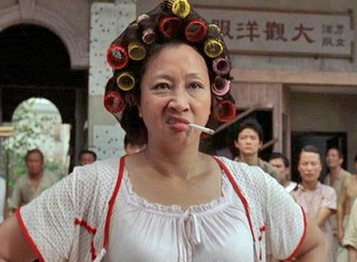 Of course, there are times to ask a bag-limit abusive Asian angling gal if she might want a few more fish -- and dinner tomorrow night. 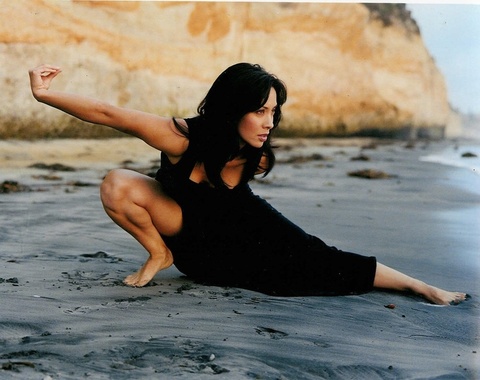 Anyway, simply contact authorities if the situation is flagrantly abusive. Better yet, just move off to find a more peaceful state of mind. Remember that 15 chopper bluefish on the ground looks like an insane amount but it’s absolutely legal, providing the catcher so much as hints he has a use for them. Fish thrown into the woods is when even I step in ... and have in the past. That’s called wanton waste and it’s not tolerated in any state -- unless shrimpers do it. Only somewhat related, getting on and off LBI has become a bleepin’ nightmare for fishing folks in a hurry to get here (congestion much of the a.m.) or to get back home (congestion late afternoon) to begin filleting. 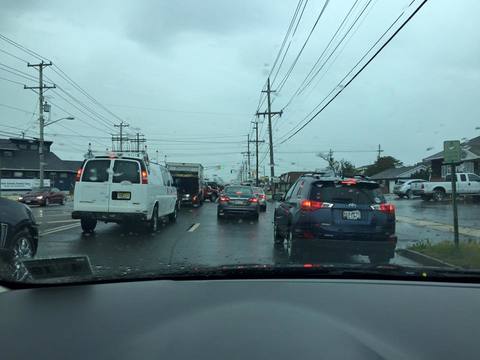 I have two writers making calls to the NJDOT to find out WTF. Obviously, the issue is the slow, single-lane traffic each way over the New Causeway. That said, we had officially been told that the new summer traffic pattern should already be in place. It better not be. I don’t know that Route 72 has ever seen a backup to Medford Lakes but it could come to that with just single lanes come summer. Don’t worry, that is not happening.

Of course, to drive by the work zones, it’s obvious that there are spanking new lanes itching to open. Once freed up for the flow, they’ll offer two-way traffic, east and west.

For now, I’ve heard tell of 20 to nearly 30 minute delays. How long does that feel when you’re getting texts that the bluefishing is “insane”? 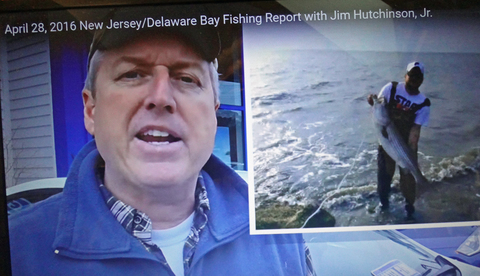 Went a little long in this week's video forecast - but hell, there's a lot going on with our 50th Anniversary and 50-pound bass showing on the Delaware for the celebration party, not to mention invading swarms of hungry bluefish and a good weakfish bite in Central Jersey.

Sydney U. with a 55.6 lb striper from the Delaware bay .. Photo from Fin-Atics in Ocean City, NJ

Many striped bass are now spawned out and heading back into the lower bay area. Several anglers have been catching large striped bass or rockfish.  The fish are skinnier and you can tell they have spawned already.  Yesterday a fifty five pound striped bass was caught in the Delaware Bay on the Jersey side with bunker chunks, reported the shop Fin-Atics in Ocean City, New Jersey.   A fifteen year old named Sudney U. landed the fish.  We don’t know the exact location.  Doesn’t matter those fish are on the move again anyway.  That fish would have bested the current state record held by Ben Smith.  There are some big fish in our waters, you just have to put in the time.  Some boys up north over the weekend landed a lot of large striped bass.  The commercial boys hear Bowers Beach are filling their boxes for market.  The action is out there and some of the fish are big.  I would not be surprised to see the state record broken again this year.  Last year it was broken but the angler did not realize it until it was too late to have the fish checked.  Old Inlet reported a keeper striped bass landed in the surf over the weekend.  The shirt striper action is on fire which is still fun in the surf. Rich King. Fish On!! 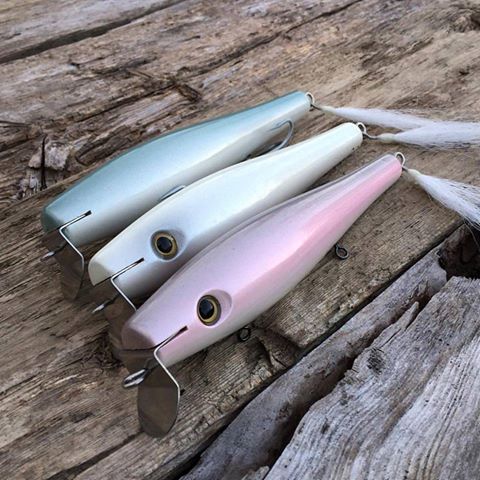 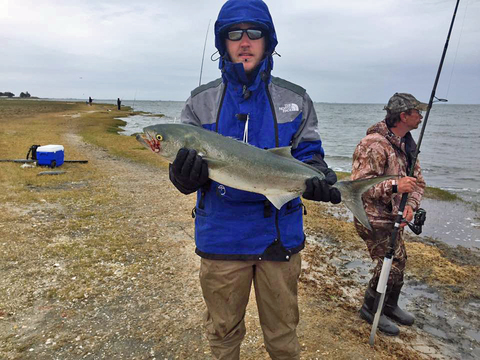 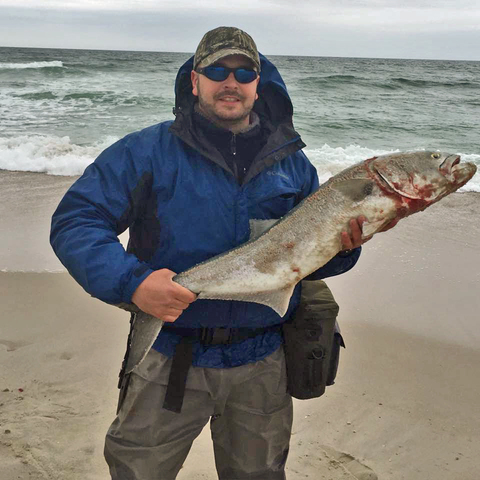 Now this marriage has future written all over it. 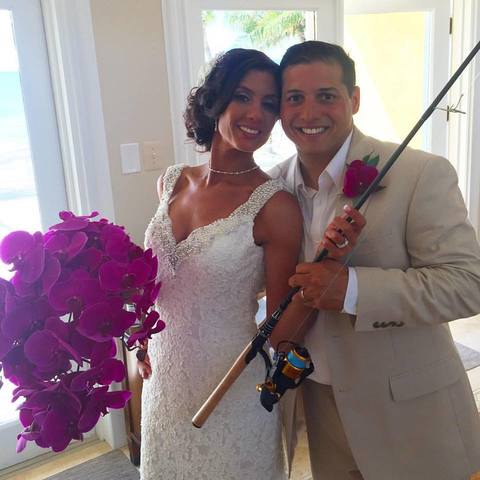 Fish Oil Plus Antidepressants May Be One-Two Punch for Depression


Researchers reviewed the findings of eight clinical trials worldwide, as well as other evidence, and concluded that the supplements appear to help battle depression in people already on medication.


“Omega-3 fish oil—in combination with antidepressants—had a statistically significant effect over a placebo,” said study leader Jerome Sarris. He is head of the ARCADIA Mental Health Research Group at the University of Melbourne in Australia.


“The difference for patients taking both antidepressants and omega-3, compared to a placebo, was highly significant,” Sarris said in a university news release. “This is an exciting finding because here we have a safe, evidence-based approach that could be considered a mainstream treatment,” he explained.”Many studies have shown omega-3s are very good for general brain health and improving mood, but this is the first analysis of studies that looks at using them in combination with antidepressant medication,” Sarris said.


Doctors may be reluctant to prescribe dietary supplements in combination with antidepressants due to a lack of scientific evidence and concerns about safety. But, Sarris noted, the researchers found no major safety concerns in combining the two therapies.


However, the study authors stressed that patients should always talk with their health care provider before taking dietary supplements. In addition, people need to be aware that these supplements can differ in quality.


“We’re not telling people to rush out and buy buckets of supplements. Always speak to your medical professional before changing or initiating a treatment,” Sarris said.


One expert in the United States believes the findings might be of use to patients.


“A large number of individuals with depression do not reach remission with one or two trials of medication,” added Fornari. He directs child and adolescent psychiatry at Cohen Children’s Medical Center in New Hyde Park, N.Y.


“This may enhance the recovery of individuals who do not respond to antidepressants alone,” he said. However, Fornari agreed with the authors that “individuals are cautioned to consult with their medical professional before proceeding.”


The study was published April 26 in the American Journal of Psychiatry.


The U.S. Food and Drug Administration has more on dietary supplements.