As you depart LBI, PLEASE be intensely aware of the Causeway construction set-up right after you’re done crossing the second trestle bridge, westbound. That’s the Bonnet Island Bridge and those just-placed concrete dividers are just about sitting in the fast-lane, by my visual reckoning. You can see where they’ve already been hit. Worsening the potential danger there is the pinball effect. One car hits the divider then gets bounced over into the slow lane. So even if you’re driving in the slow lane, slowly, you might suddenly have another vehicle essentially sitting in your lap. That can really ruin an otherwise nice weekend. PLEASE (!) do not hit that bridge while accelerating to 60 mph-plus, as many folks are accustomed to doing – and many are still trying to do, not realizing there is now a wall-way in the way.

I’d like to send a shot of gratitude to the head of the Causeway project for an above-and-beyond effort to protect the terrapins being impacted by the initial work to build  a new Causeway – and upgrade the old one. I see some orange waterside fencing to dissuade terrapins from coming ashore where the heavy equipment is in full swing. There are also those seemingly facile – but nonetheless effective – “Turtle Crossing” signs on the stretch east of the Big Bridge. While there isn’t room for vehicular swerving should a terrapin cross the road, it at least heightens motorist awareness. It should be realized that even without the new bridge work that Causeway zone has long been an insanely hazardous crossing point for slow-moving anythings.

That said, I’m sorta stunned that I haven’t seen any signage marking slower speeds within the construction zone, short of those “Give Us a Brake” postings.

By the by, those seemingly innocently suggestive signs can be ball busters when factoring in the brutal fact that motoring violations within a construction mean double fines and potentially double points.

But back to that original warning about how hairy those concrete dividers can be. As we speak, Causeway speed freaks are all but discounting the highly modified road layout on the Causeway. “Screw it,” they say, and are hell-bent to get up to a 65 mph and higher cruising speed. It’s quickly becoming a circus out there, made way worse by those gas pedal goons.  Yes, I have total sympathy with the legions asking why in bloody hell the state is starting such disruptive work as the busiest time of the Shore year commences. Regardless, it doesn’t help to accelerate as a form of retribution for the work. What’s more, you ain’t seen nothin’ yet. There are more traffic pattern tweaks and changes coming -- followed by flagmen and last-second redirects of vehicles already slip-slidin’ down slope of the Big Bridge, heading to the Island. It could get crashy. 2 Bigeye and over 50 plus yellowfin today.

Our very own Bob Massa with 2 of his keepers caught today. I will be enjoying a fillet Bob was kind enough to share.
Bob will be giving free fishing classes at the shop every Sunday from 6-7pm in the parking lot. Bring a beach chair.
Learn what's bitin, how to catch em or how to improve your technique.
Classes start June 30th. Rain or shine. 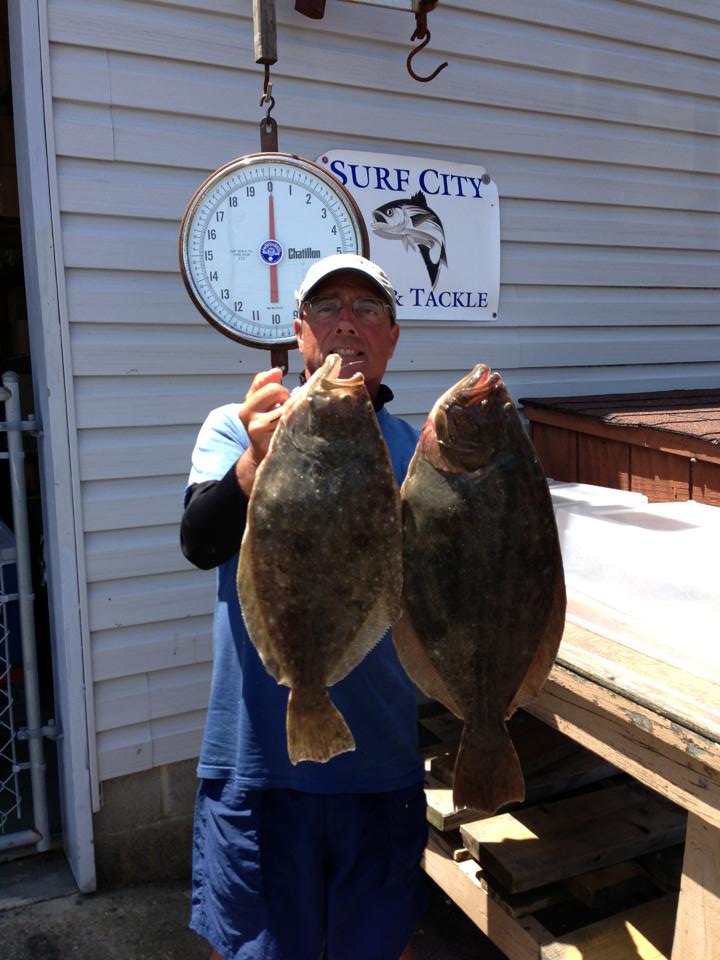 The BHCFA began its Junior Mates Educational Program on Thursday, June 20. This 9-week program is designed to teach the skills a young man or woman needs to be a mate on a charger boat. All youngsters 13 and above are eligible for the course. Although one class has been held, interested teenagers can still sign up for this year’s course. Information can be found at the BHCFAS’s website atwww.fishbeachhaven.com or by calling Captain John Koegler at 609-290-3349.

I concentrated on fluke in the back bay this week.  Between an ocean upwelling dropping the ocean water temperature to the upper 50s and the bay being off color, the bite slowed.  This morning’s trip with the Voorhees family from NY State yielded several keeper fluke with the biggest one going 21”.  That nice flattie was landed by 12 year-old Jason Narde and was the first fluke he ever caught.  Way to go Jason!  The so called “super moon” gave the crabs super lock jaw, or would that be lock claw J as they are doubling up and shedding.

Although I have been fishing Barnegat Bay and the near shore waters outside of Barnegat Inlet for over 30 years, this year I am proudly celebrating my 10th anniversary of Lighthouse Sportfishing.

The weather finally cut us a break toward the end of the week, and gave us a couple of absolutely beautiful days to probe the back bay for summer fluke. In fact it was almost too nice, with no breeze and power drifting needed to keep covering ground. Slime weed is a bit of a problem right now, but the fluke are there for those that persist in fishing through it. Jim and Gene Karamen, along with Jim's daughter Christina and husband Vince, were out for their annual summer fluke trip on Friday with the catch topped by Jim's 21" flattie that inhaled one of our custom teasers. George Selph came out again yesterday, landing a summer mix of fluke to 22", bluefish, a nice fat weakfish in the 5-6# class, and two cownose rays in the 25-30# class on ultralight tackle.

I wouldn't call the fishing red hot, but there's enough action to keep everyone engaged and rewarded back at the dock with fat bags of fresh fish dinners. We'll probably stick with the back bay fluke fishing for the next couple of weeks, unless the weakfish start showing up widely enough that we can target them specifically.

With June 2013 being one of the wettest June’s on record, the captains of the Beach Haven Charter Fishing Association are looking forward to a surge in the area fishing now that the sun is making itself known again.

Captain John Koegler had a family out fishing recently on a trip which was a combination Father’s Day and birthday present from wife Anna. At first the bite on black sea bass was a slow one that lasted about two hours. Suddenly, the bite turned on as all anglers on board started bringing doubleheader after doubleheader to the surface on every drop. Anna herself caught the largest sea bass of the trip. The trip resulted in enough fish fillets for several meals.

Captain Fran Verdi on the “Francesca Marie” reports black sea bass fishing has been good one day and slow the next day. Mondays trip it was slow with keepers but there was a lot of action on small fish. On Tuesday’s four-hour trip he hit five wrecks. He picked fish for the first hour and had nice action for three hours with a box full of keepers.