(Below: One of Alfie S's wondrous plugging creations -- 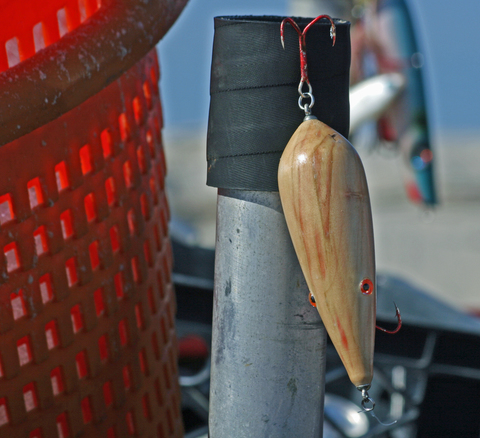 Saturday: Such a day, per The Pretenders and me.

I got in a nice chunka outback time, doing my usual digging and even getting in some minor tracking, after coming upon some juvenile coyote tracks. I followed them maybe a half mile instantly realizing the young canid was bee-lining somewhere, fast. It was most likely heading back to home turf, possibly after a night of following its nose after foodstuff. It’s easy to see the difference between the straight and narrow path of homeward bound Canis latrans (coyote) and the haphazard weaving of one that is foraging, with its many stops, sniffs and ground scratches. It’s also possible to sometimes ID the sex of a foraging/exploring coyote based on the type marking it leave; sprayed by males and puddled by females.

Per usual, I headed back to the Island to end the day on the south end. What a surprise to find the place utterly packed with walkers and drivers. It was as crowded as it gets down there in the off-season. Most were behaved. And they weren’t all birders. In fact, only a few had the typical birder regalia. Most were just making the beachside walk.

We’re back to just one owl. I don’t know if that’s because of the cruising crowd or the recent arriving snowls moving on. Many birder’s have noticed the Holgate snowls will periodically take off to do some down time over on people-free Little Beach toward Brigantine. They’ll then fly back to LBI when they get lonely. 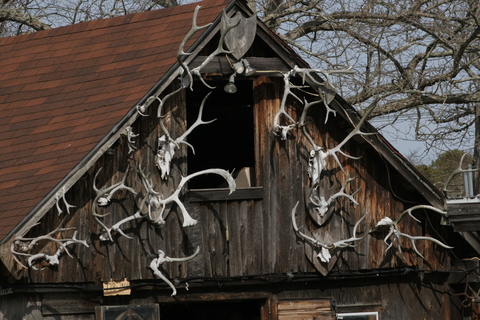 Sunday: Not real pretty out there but the ocean is clean and easily fished. It has calmed a lot from yesterday. The water temp is 43 degrees as of 11 a.m.

Nick H report (yesterday) : Fishing report... had two hits, lost one short striper in the wash while trying to turn the GoPro on... shame on me! Water was clean with lots of current pushing north along the beach. A nice day for December fishing.

Annual question: How late into winter can you catch striped bass? Oddly, I have no solid answer. This mildish winter (to date) I know for sure there are some surfside bass to be had, right until next year, i.e. Jan 1. As to bassing in January, the mystery deepens -- not only because of the frigidity factor but, more so, the extreme lack of fishing effort. IBSP has far more winter bassing activity and shows bass into January and even beyond.

On LBI, myself and a scan few other who frequent the frozen-over beachfront will occasionally make a few highly noncommittal casts; not nearly enough to offer a real indication of whether or not there are any schoolies in the frigid suds. I will point out that the surf zone around Nebraska Avenue has traditionally held the best showing of hanger-on stripers. 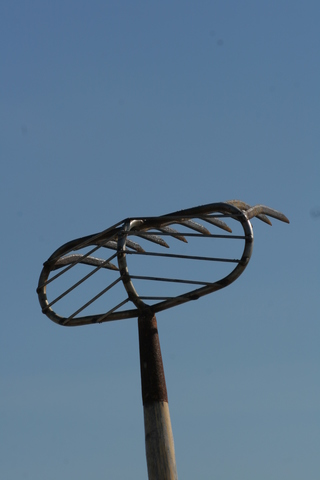 One thing I’m sure of is that stripers freely feed in icy water – and seemingly aggressively so. I base that on a goodly number of highly successful days I’ve had ice fishing bass at Collins Cove in the Mullica.

I began wondered if the Mullica ice-fishing bass were possibly more aggressive because of warmer water near the bottom of the cove, feasibly due to warmer groundwater percolating upward. It should be remembered that not that far underground, the earth holds a steady and quite moderate temp. That is the prime component of geothermal energy, which heats and cools the nearby Stockton College.

As with many scientific theories, that geothermal one looks good on paper but can’t hold water in my bassing case. I have dropped professional thermometer equipment to the bottom of Collin Cove and the water temp in the deepest spots has not been that much warmer than the hard-frozen surface water. That’s not to say it wasn’t somewhat warmer, just not a sauna by any stretch. Tidal and geological currents in the river were the main theory killers. The brisk flow prevents any upwardly percolating water from significantly affecting bottom temperature. That said, when I jigged atop hardwater at “The Cove,” I would take striper hits that were fierce. The following fights were also heated, with drags coming into play. The line was all over the ice hole, so to speak. In fact, it was sometime necessary to put the rod tip – and then some -- into the hole to keep the line from abrading on the ice, mainly the rough ice on the underside of the ice cover.

The largest ice bass for me were few keeper-sized models, though the law back then prevented any bass keepings within Collins Cove since it was west of the Parkway and closed to keeping any and all bass, regardless of dimensions.

I often tell the story of a black fellow who I was happily ice fishing with when he got into a massive bass – using my jigging method, I might add. I saw the full-blown fight and after quite the fight the fish’s huge head. The noggin was way too large to get through the perch hole. I opted to hand drill a second hole next to the inadequate opening. I was then going to carefully break the wall between the two, creating a larger opening. The angler had a heavy rod and line. There was likely enough time to drill even a third hole if needed. But up runs this well-beveraged fellow wearing a genuine coonskin cap and a wielding a five-foot heavily horsepowered ice auger. Even in a subzero state of mind, we all pretty well knew that an auger spinning at 200 rpm is not the best mechanism to have anywhere near a taught piece of monofilament line.  That auger instantly grabbed the line. While none of us were overly shocked at the bird’s nest that formed on the drill, that bass musta got whipped upward like no other bass in history. It got off but is still telling its kids about that ride. 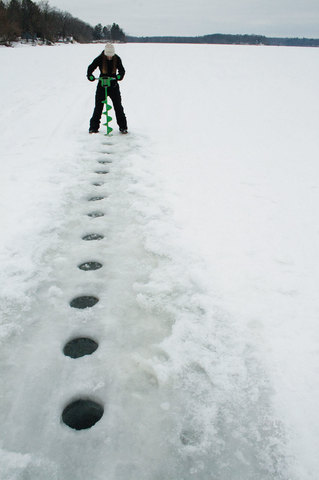 Anyway, that ice fishing for bass simply points to the fact that bass not only feed in frigid water but are far from sluggish. Also, the first bass of spring are seldom if ever emaciated, like bluefish, meaning they must do some serious dining throughout the winter. Just sayin’.

KILLING COLD, FOR FISH: You might have read about some die-offs of bass due to water no colder than the low 40s. That rarely has anything to do with unbearable water coldness. In fact, most cold-water die-offs are not due to hypothermic response but an entirely different biomechanical process. Take it from someone who kept saltwater aquariums for years on end: fish suffer from a horrible bodily shortfall when it comes to rapidly regulating their internal body temperatures. They simply can’t adapt to sudden water temp changes – for hotter or cooler.

I even tried to study the reason behind the failure of fish to internally adjust to rapid temperature changes. Although the failure of internal organs makes total organic sense, there are still no clear indicators why fish, as a paraphyletic group, suffer such terminal collapses far worse than most other creatures.

Sufficed to say, most fish from our region can gradually adjust to the wintriest of water temps. But, remove the gradual, and fish are goners. That is most obvious, in an ugly way, during nuclear power plant shut downs. 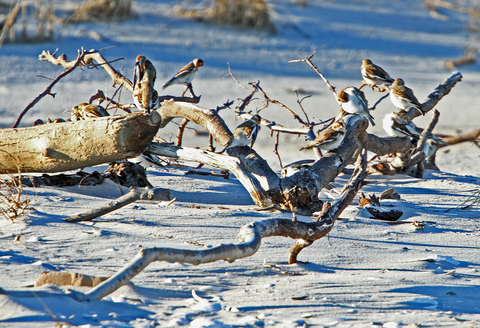 Stockton College is a public, undergraduate college of arts and sciences located the Pine Lands of Southern New Jersey.

The main academic building complex consists of 14 wings connected by an enclosed gallery containing approximately 440,000 square feet of floor space. The original buildings were designed and built prior to the energy shortages of the 1970s and thus were not as energy efficient as they might be. By 1990, the Heating, Ventilating and Air Conditioning (HVAC) units were reaching the end of their useful life, and a feasibility study was undertaken.