Well, I got off the striper snide in a big way today. Not big as in large but big as in numbers. I got me four bass overall, all in the 28 to 32 inch zone. I lost a  couple more. All thanks to Spray Beach, a low tide and a couple jetties holding some decent water around them – and obviously holding some bass to boot.

The thing is I might not have known there was a bit of a bass bonanza if I had defiantly stuck to my popper and swimmer guns. I had been throwing surface plugs a good chunk of the hard west wind day and hadn’t drawn so much as a striper sneeze at them. Then, somewhat last-resortish, I threw a sand-eel Fin-S on a battered Spro jighead, with white hair and a few strands of rainbow Flashabou. The first cast, as the jig got near the rocks, I thought I had hung up in the jetty. Nope, a feisty 29-incher. A second skinnier fish, about the same length hit at the exact same next-to-the-rocks area. Brought that one back to the truck for a quick photo -- and to put on another Fin-S.

Despite casting a goodly distance out, I didn’t get a touch except near-in. I don’t know if the bass were following the jig in and hitting when it raised up at the rocks or whether they were feeding flush against the jetty. I’m guessing the later.

I had two landed fish and two lost fish at the first jetty, moved to the next jetty north and two more bass landed (on the rocks) and another one I thought was bigger lost as I was trying to walk it in. It might have been inching toward 34 inches.

It felt real good – especially with fish at that size, fighting like crazy, as opposed to larger bass -- and their bull-doggedly charging straight out to sea, before doing the parallel pull thing when they lose their west-to-east energy.

Go Royals -- or Giants. Fun watchin' one way or the other.

Sunday, October 26, 2014: A.M. stuff: (Check back later today) It has been month after month – count ‘em – since the ocean has been this flat. We’re seeing a short stint of Lake Atlantic conditions along the beach. Of course, when you boat even a short ways from the beach, the brisk west winds will convert the sea’s surface from feathery to victory at sea-ish, as participants in the Sea Shell’s Striped Bass Derby are rapidly realizing. That rapid changeover from smooth to snotty proves how quickly things can change from beach to bounty. 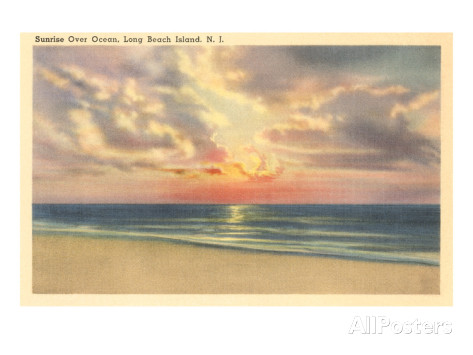 Predictably, the beachfront surf fishing pressure is also as brisk as it has been in those same “many months.” Loads of buggies and walk-ons, mid-Island. While I had hoped for an ocean calm-down, this flatness might be overkill, making it easy for fish to see plugs and even baits. It's surely time to make sure you keep your hands scent-free when putting  on artificials, clam gobs and bunker chunks. And don't think for an instant a bass can't smell hand stink on oily bunker donuts. A fish's entire existence is based on smell. A little bit of hand soap, shaving cream, aftershave, petroleum, even tackle box eau de plastic will drive a curious fish from bait. While I only got a mid-Island, post-church look at this morning’s surf anglers, I saw no thumbs up when I shouted out, “What ya catchin’.” One guy replied, “Some nice rays,” referring not to sting rays but the flawless rays of sunlight today.

It’s surely a SPF9 day out there. Remember, ultraviolet rays are year-round skin attackers. In fact, off-season sun barrages may be worse than summer because most folks forget to lather up before facing them, head on  – for hours on end, often staring into the teeth of the sun for even longer periods than during the smart-thinking summer times.

Regarding off-season sun, I also like to reference my snowboarding buddies, who come back from freezing mountain adventures looking like they just had a Caribbean tanning session – except for the “raccoon eyes” from goggles.

Yesterday I fished on my boat for 8 hours and caught 25 tog, a sea bass and a small blue. My friend Sean caught about twice as many tog as I did. We got back to my dock at dark and after unloading the boat and cleaning it up, I exercised for 1/2 hour, took a shower and went for dinner. I then went jetty fishing for 2 1/2 hours and caught 3 stripers to 30".
How many young guns can do stuff like that? John Michael? Perhaps if it was hunting, Carmine Angel? Needs 12 hours of beauty sleep each night.,Sean Smida?Has a kid and an expectant wife to care for, Jeff Crilly? Would get too tired carrying the 13 rods he normally brings with him. Lou DeRosa? Does not fish often but when he does he is canyon round., Cj Ratshin? Wind might blow him off the jetty., Ray Kerico? Conscientious objector to exercise., Robert Berger? Mom won't let him until he is 25., Kyren Dooley? Not quite a young gun anymore but he is probably still fishing in the mudhole anyway.

One fish last night. Not big, but I caught it on one of my custom plastic lures. 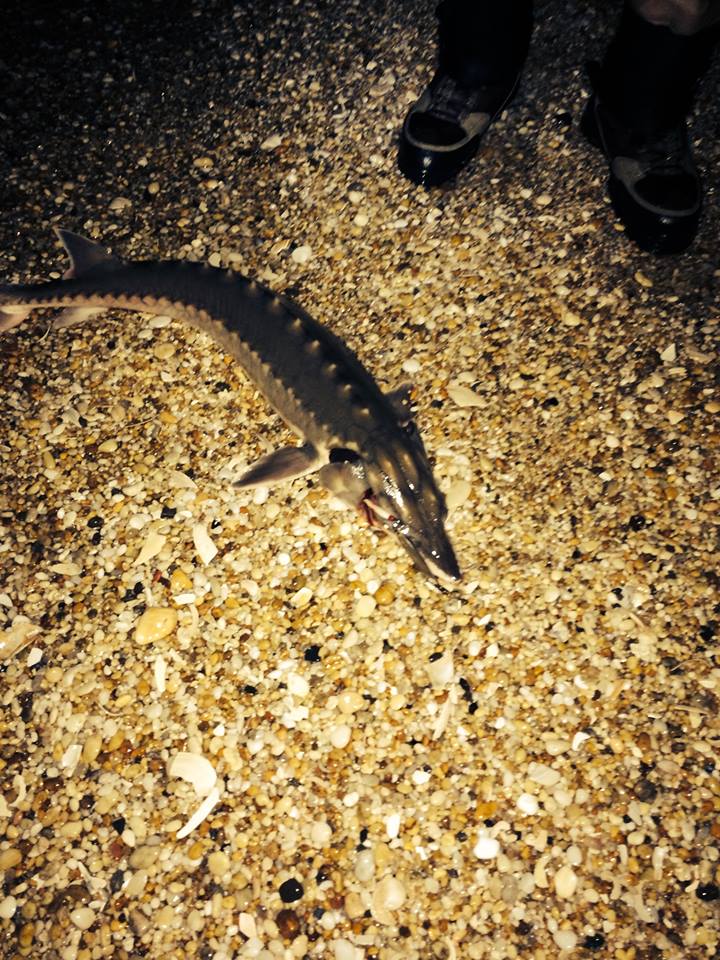 I was balking over going out for Halloween this year, then Keisha and her, uh, mount stopped by and asked if I wanted to tag along. Consider me tagged. 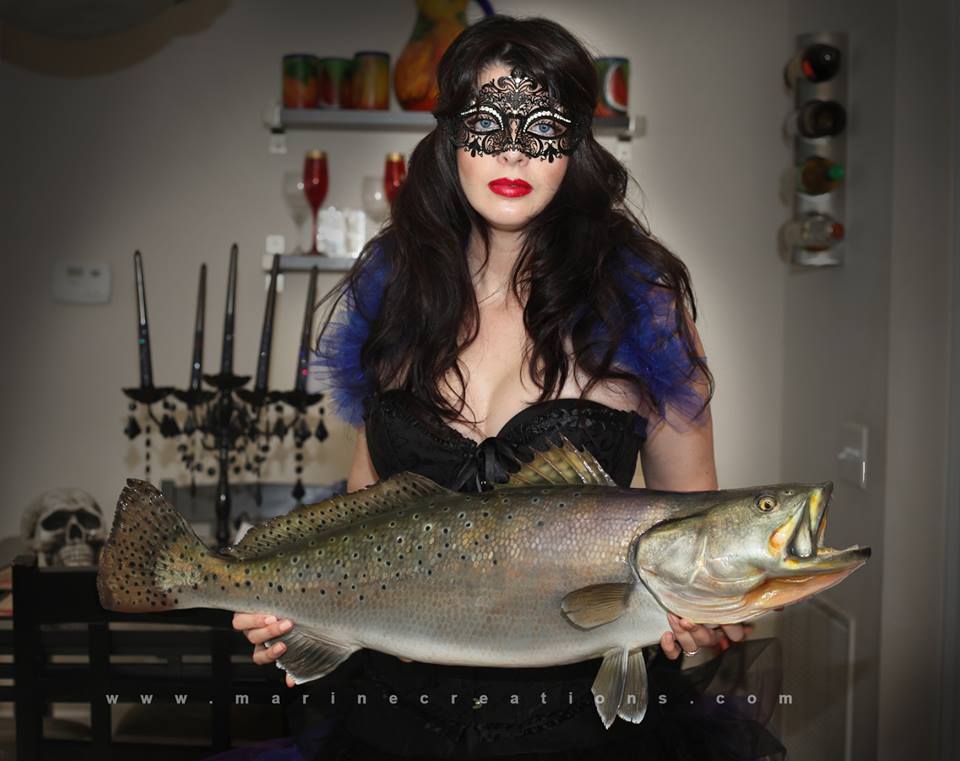 Attack of the mutant ghost crabs ... Keep fingers away!!! Show of hands: All in favor of simply skipping winter this year and keeping what we’ve seen this weekend. I thought so -- though there sure are a ton of winter-huggers out there. While long-range weather prognosticating makes dice throwing look like a sure-call, I have been the lone voice who saw some very mild fall periods. In fact, if you recall, a month back I was writing about the very unusual bubbles/domes of warm air moving into the middle of the nation – coming up from the Gulf, then slowly migrating eastward, our way. The third one of those in a row is now happening. We could see a day of record-breaking warmth this coming week.

Below: An example of an influx of Gulf air working its way northward -- and eventually eastward. 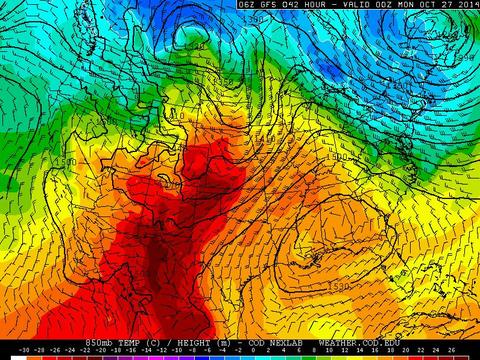 At the same sultry time, most true experts (I’m not one) have tugged the percentages stings and, in unison, are seeing polar vortexes stacked on the horizon, approaching in a pattern that brought us vicious cold spells last winter and even into spring.

Since my vote doesn't count, I will go anti-expert and confidently see a slew of possible alternative winter sky patterns. I wouldn’t be surprised to see some record warmth at times this winter. However, even I must toe the frozen line, unable to deny the possibility of some spells of bitter, near record, cold. 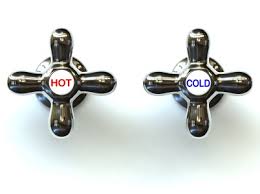 No, I’m not covering all the bases. I’m instead predicting highly-changeable -- and highly-impactful – ranges of temps and weather, i.e. vacillations that will drive parents crazy trying to dress their kids for school. 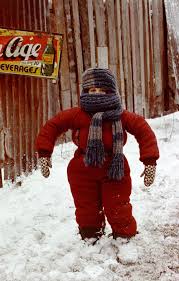 As to here and now, there’s no doubt we’re in the mildness – and that truly spells suckedness for stripering. Yes, I notice that a few bass have been caught this weekend, with a couple heading to the LBI Surf Fishing Classic. One of those bass came from an area that is tough to reach, proving the lengths some anglers are going to for a striper. 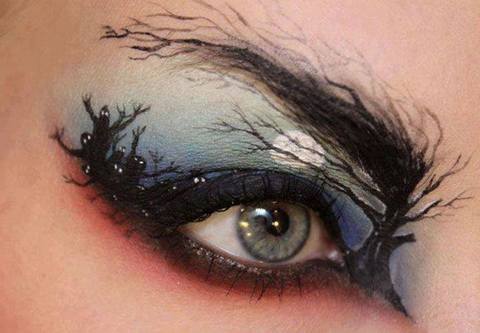 These weren't the only folk diving in yesterday:

in the ocean, October 25th 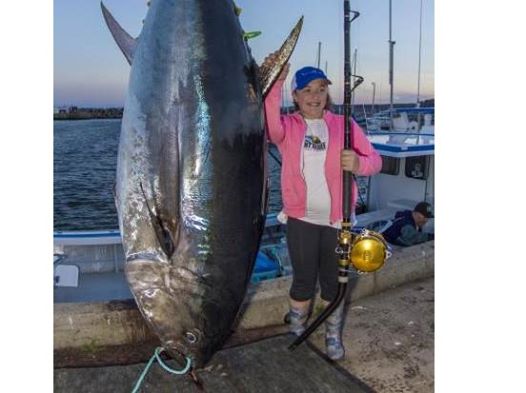