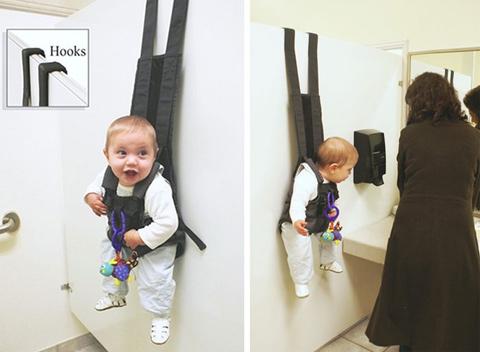 And moms a bit lazy about keeping floors dust-free ... (These are real items for sale) 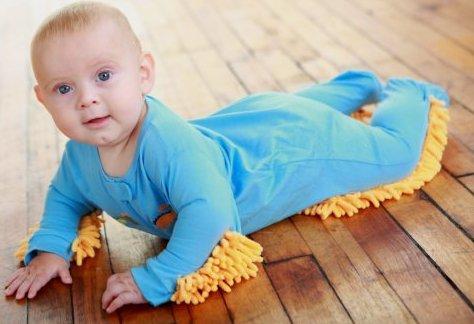 Below: I've been writing about the fear of clowns -- and how many folks have it. I've also been warned that you don't want to joke around about them. I snickered. Then, while digging a nearby dump today, I uncovered this odd bugger. In 50 years of digging, I never once dug a clown. Now, no sooner do I joke about them than this appears. Seems friendly enough ... but he sleeps outside. I wake up to find him in bed with me ... Damn, that scares me just kidding about it. Sunday, October 23, 2016: The wind ruled the day but lost its oomph by sunset. Though winds have lowered for now, there will be serious blowout tides through tomorrow, as winds pick up again. Tie-up vessels with large high/low swings in mind.

Boat bassing could rock for a short early-a.m. stint tomorrow ... if winds offer windows of opportunity. I base that on the striper success had by a few folks who got out on the water today.

The wind-smoothed ocean is going to allow the big bunker to ball up within sight of the beach. Yes, I have to mention that frustrating surfcasting fact.

There will be a brisk side-ass and southeast winds by Thursday that could break up the baitballs and encourage bass to cruise closer to the beach. Hey, it could happen.

Not a load of big blues to date--  except for the Classic 8.96, semi-slammer caught Barnegat Light on a Ava Jig by Marcella Friedman.

BUGGYIST MUST-HAVES: It always begins with a tire pressure gauge. It's number one because a tire pressure gauge is what should be utilized before even going onto the beach. It is obviously mandatory when airing down. But even if you keep you’re tires low, like me, it’s hugely important to regularly check in on the PSI. It can tip you off a slow leak of air, something that it very common when valves, even capped valves, are in a sandy environment.

I prefer a one-piece gauge over a hose gauge. I've had leakage problems with every hosed gauge I've had. Both are good, though. 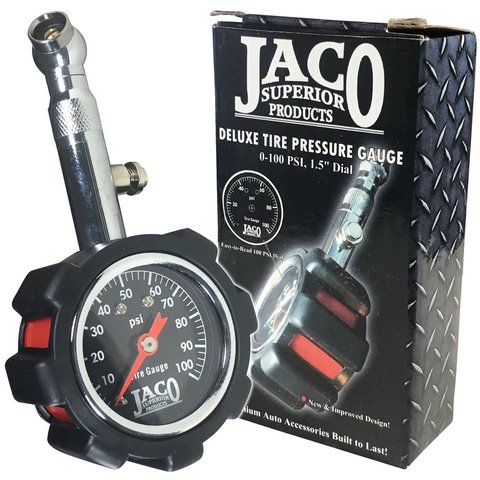 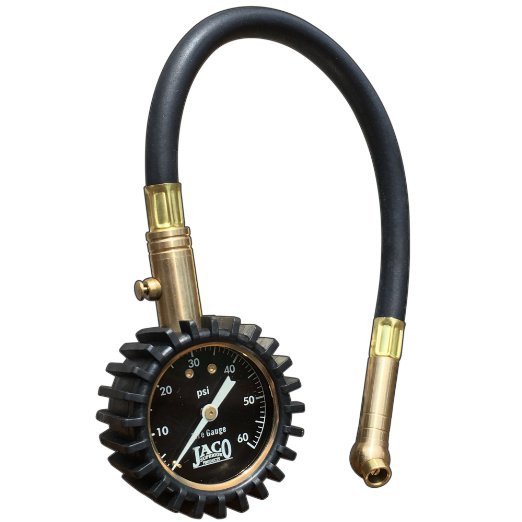 A single grain of sand inside a valve can ever-so-slowly weep out precious pressurized air. Failing to detect a leak -- be it after you've aired down or aired up, post-beach -- can lead to the hideous wake-up sight of a tire flatter than a crushed road toad. Once a modern tire is totally deflated, it is often beyond just a simple air-up. The airtight bead between tire and wheel will likely have been broken. When that happens, you can pump in air until the compressor starts smoking and nary a breath will remain inside. The only hope is to jack up the vehicle and doubly hope that the tire resets. If not, it’s a total tire change time – and there’s not going to be a NASCAR pit crew to get you back on the road in under 13 seconds. Then you pay to have the other tire fixed. Again, all because of a grain of sand, or a slow leak that a regular pressure check might have detected.

Now that you’ve aired down -- and gauged the tire pressure -- it drive-on time. That ushers in the next piece of equipment: your vehicles panel gauge. Believe me, this seeming no-brainer can be a biggy. Always check to make sure you're in 4WDH, for "High." You accidentally go on a torn up entrance in 2WD, you can bog straight down like you fell into a tar pit. Even when you suddenly realize your misstep and shift into 4WD -- and regardless of how loudly you call yourself an idiot -- the bogdown damage is often done. You're barely started -- and you're digging out.

Note: There is never a beach need for 4WDL, for "low." 4WDL digs tires in so fast, it’ll instantly and deeply sink them.

OK, now that you’re finally beaching it -- tires nicely deflated and in 4WD -- here’s hoping you don't have to use the next pieces of indispensable buggy equipment: shovels. Note well: shovels plural.

It seems such a sophomoric piece of obviously essential equipment yet it's somehow nearly impossible for even better 4WD'ers to remember packing. I would say that nine out of 10 bog-downs involve vehicles that are highly shovel deficient. I always marvel when a vehicle is sunken half way up the door and the owner reaches in and pulls out an army trenching tool. "Yeh, that'll dig ya out, dude."

SHOVEL 101: All shovels are not created equally when it comes to digging out a badly bogged down vehicle. While a long-handled round-point shovel is a decent sand mover, it pales when compared to the standard square point shovel. But, congrats on at least having a round-point shovel.

When thinking square-end shovel, a so-called coal-scoop shovel (steel) rules the dig-out arsenal. It is not only sturdy but it customarily has a short handle. It not only stores easier but allows close-quarter digging -- without smashing any nearby fellow diggers, a pitfall of all long-handled digging devices. I have been on the receiving end of a long shovel handle. It hurts. Tip: If you have a long-handled shovel for the buggy, cut down the handle. You can use the cut-off piece as an ash-wood protection device. Just sayin'.

By having a couple/numerous shovels handy, it won’t be just you doing the dig-out -- or you having to wait around for one guy to dig things out. Yes, another think I’ve learned the hard way.

ONLY A MAYBE PIECE OF EQUIPMENT: If opting to keep a towing devise on-board your buggy, choose wisely – both the device and the advisability of using the tow method. It's wrought with hazards ... especially when left in inexperienced hands.

I have both a rope and strap, rated to 10,000 pounds. I forgo chains ... after seeing one break during a pull-out in the Pines. It lead to a load of stitches for a younger gal’s forehead. For the same metallic reasoning, I seldom use straps/ropes with metal hooks for hitching. A knot tie is easily as sound as a metal hook. I will note that a rope/strap knot can get very tight after a pull. I keep a large screwdriver as a de-knotting aid. I've also simply cut a rope/strap to free it. Just remember to melt the cut end.

Oh, you should also have a box cutter(s) in your buggy. It has a ton of different uses, even above a good knife blade. 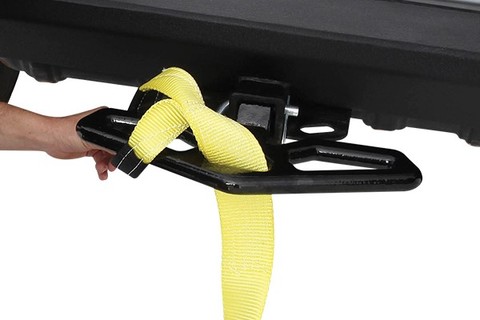 JACK IT UP -- ONLY IF ABSOLUTELY NECESSARY: The only time to resort to using a jack is if a tire is kaput -- like after accidentally running over a buried beam with a huge bolt sticking up. This I know. A jack-up can also useful if a bogged down vehicle is resting so heavily on its frame that only lifting will allow the shoveling of hard to reach sand. A common need for a jack-up is the above-mentioned flat tire, which has come off the wheel on the beach. Many a buggyist knows of what I speak.

Warning: Jacking up a vehicle on the beach can be remarkably dangerous, due to extreme instability. It should only be used as a last resort.

While all vehicles have a tire jack, it’s useless if you don’t know where it is -- or how to use it. Standing by your sand-stuck truck nervously reading the Owner’s Manuel on how to find the jack is pretty pathetic. I also mention that the jacks now found in even tougher trucks are beyond pathetic. They’re frickin’ toys!

Not that many folks will go this far when buggying, but a floor jack and accompanying support board is the way I go. There are also jacks made for off-roading. I’m currently looking at exhaust-inflated air jacks. I like the looks of them but don’t want to recommend one until I try it in hostile sand conditions. So if you see my in Holgate with a huge orange bag holding up the aside of my Chevy it is likely only a test.

PS: Saving one of the most essential pieces of buggying equipment until last, you should always have at least two (or more) top-quality, fully-powered flashlights. They can help shed light on a bad situation. They can also act as an emergency signaling device. Nowadays, both handheld and head-mounted "torches" can be insanely bright. Go for brightness, since most can be down-lit for a softer beam. I prefer the ones that can be easily charged via a lighter socket or off a computer.

Virtually all municipalities that offer permits require you have most of the above items before you qualify for a permit.

Now that's how you kick off the fall! Grinding it out through the wind and putting our time in. Not another boat in sight. 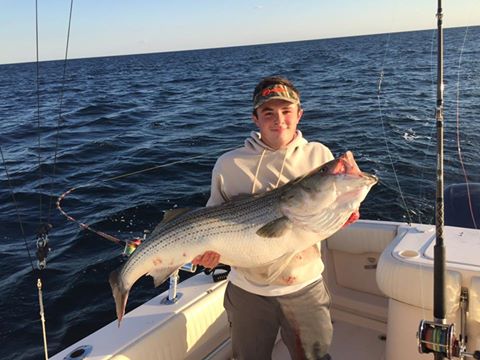 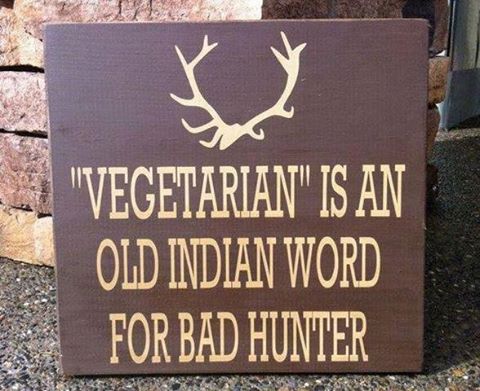 Hey everyone, moving forward the vast majority of my fishing photos will be published to my business page as Instagram has finally allowed us to sync pages rather than personal profiles. That being said, please like and followApex Anglers here on FB and @apexanglers on IG if you are interested in keeping up with our catches. Every engagement helps, here is a snapshot since the change! Likes and shares on our content are greatly appreciated to help expand our reach even further. I have worked tirelessly over the years to keep this going, and I say it all the time, but I can't wait to see what the future holds and I cannot thank you all enough for the constant support!

Thanks again Jay for those great tips on How Not To Bog Your Vehicle Down On The Beach........very important, IMO.