Sunday, November 20, 2016: Batten down the hatches and lean the surfcasting rods on the spikes ...

Below: BL jetty. Some rockhoppers refused to accept a large swell had popped up overnight. 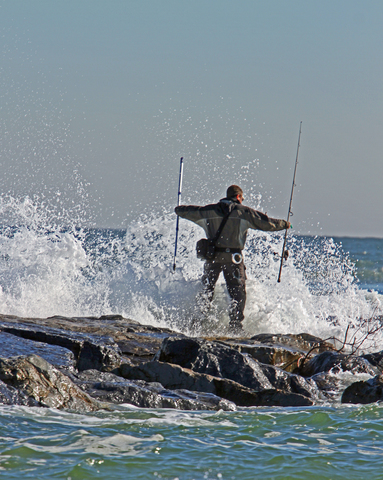 Those Asian gals can be hardcore anglers. Here one takes to a handline to fish tog among the jetty rocks. Can you imagine a 10-pound blackfish grabbing hold/ Below: Tell me this doesn't get you wasabi-brained just seeing it.

Danny Mears Caught in the USA 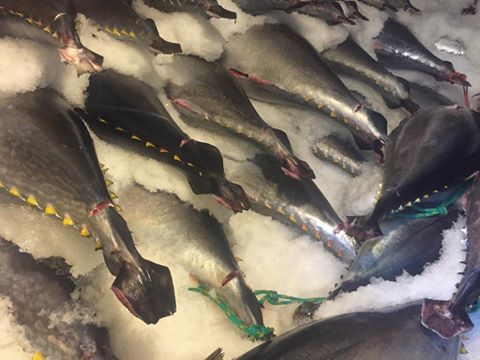 Had the pleasure to fish with George Cox a few days ago on opening Tog day. Had a blast and had a good steady pick of fish the whole trip! I tried out the tog jigs everyone raves about and holy crap now I know why!!! They flat out killed the tog and get bit 3 times faster than any tog rig. 2 oz had fish to 9 lbs what a blast they are to use. I highly suggest picking some up and giving them a try! Kyle Kyle Heyman even had to jump on board after he saw what they can do!! 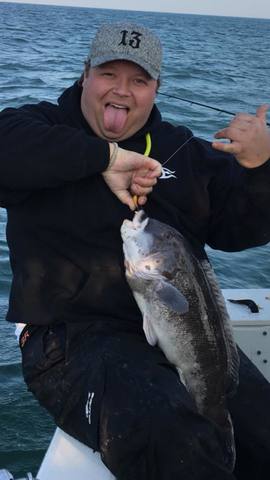 Sunday, November 20, 2016: Batten down the hatches and lean the surfcasting rods on the spikes instead of mounting them in the spike. With winds gusting to over 40, it’s sometimes best to simply rest a surf rod lower to the sand so the wind doesn’t play around, whipping an upright rod around to where you can’t tell a hit from a wind whacking.

I spent all yesterday going from the Barnegat Inlet jetty to Holgate, cruising the beach almost from one end of the Island to the other. 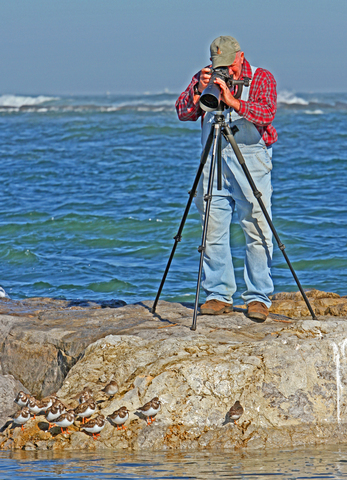 My drive-along was slowed by tales of wondrous fishing things … from the frickin day before. “Ya shoulda been here yesterday.”

You might have noticed by the Classic weigh-in board that we had quite the bass and bluefish spurt on Friday. Since it’s now a thing of the past, I can note the prime hooking zones were Spray Beach and Beach Haven. I was overwashed with tales of huge mats of surface bunker, splashing gamefish, divebombing gannet and whales. It made me glad for those who were there … and pissed at myself – having been off Island for the one day so far this fall that lit up with fish, the way it should, regularly, this time of year.

Below: Maybe not quite this crazy ... 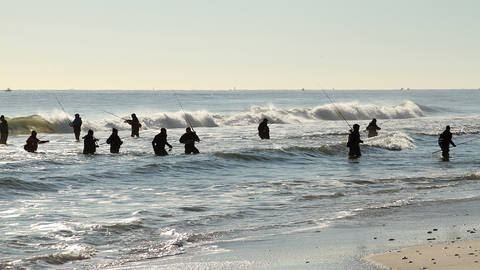 Along with the fish that hit the Classic scales – see www.lbift.com -- a goodly number of non-tourney fish hit the sand during a couple/few-hour spurts.

Stripping line to beat the band were huge blues, many/most of which were caught and released. I was also told by a couple witnesses that some very fine bass were landed, photographed and let go, to swim another day. I’ve long said LBI’ers have one of the most dedicated catch/photo/release philosophies anywhere, easily on par with New Englanders.

A few folks got their thanksgiving seafood item, via eater-size striped bass, though holding Friday’s filets in a fresh state until Thursday is beyond good taste … and might exceed ptomaine safety limits. Freezing bass and then going casserole or fishcakes with the thawed meat still makes a remarkably well-received dinner addition. I’ll guarantee there will be far less seafood leftovers compared to the turkey remains. Bluefish always has to be eaten ASAP. No exceptions. 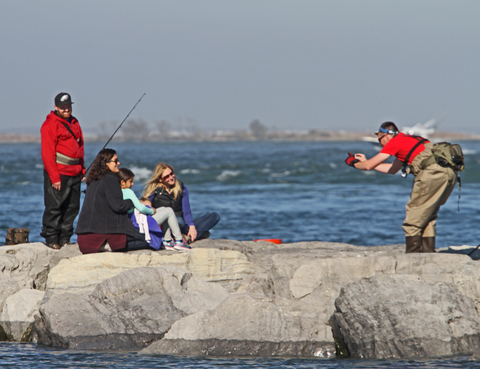 SATURDAY DROOP: With those one-and-done good fishing times spoken about, yesterday was the polar opposite, due in some part to an overnight groundswell translating in waves up to five feet. (See below for my rambling on the sudden waves we’ve been seeing.) Add those waves to the still-radical moon tides and it was really tough to fish the frontbeach, as I found out.

Yesterday’s the take of fish was hardly the talk of the walk. I saw nothing caught – though, as noted, many folks were still psyched from the fish showing from the day before. It didn’t hurt the mood to have 65 air temps and light winds.

Weather talk is often little more than stating the obvious – and that’s obvious when I say today is as cold as it has been since last winter/spring. Add in a couple west wind gusts to near 50 and it’s no surprise yesterday’s angler-packed beaches are all but barren by comparison today. It sure seems a fine day to hunker down, grab a hot beverage and watch a combo of NASCAR and football. I’ll try that … but still end up out and about. I need some woods time.

Days to come will be both cold and west of wind. Unless some bait-related flair-ups take place close to the beach, things will likely revert to a snail’s pace striper bite. I’m still going to get a Thanksgiving bass. I’m digging blood worms, buying some Wildeye shads and GULP plastic eels – all known to entice smaller bass.

This is the third sneaker wave-whacking in a month.

But the true winner for waveriders are groundswells, generated from more distant weather systems, including hurricanes when in season. Not only do groundswells tend to nicely line-up when breaking as waves – meaning they break with the refraction waveriders covet – but they’re more powerful. We’ve seen that power with the recent groundswells, especially in Holgate, where the beaches have taken a beating more commonly seen during coastal storm

Having six decades of wave experience under my now dry belt, I’ll knowingly note that the recent showing of groundswells is rare. However, I’ve seen the trend toward more groundswells going back as far as 20 years.

You might not believe it if you read my blogs, but I’m not sold on every dang earthly thing even remotely out of the ordinary being related to climate change. But, I have to scientifically wonder if the fully-proven warming of ocean surface temps, especially in the Atlantic, might not be powering oceanic storm systems that have formerly been knocked down by cooler ocean temps. A sure sign of storm-enhancing ocean temps are more frequent groundswells, as storms (especially in the fall) power-up once out over the ocean water.

While interest in such swells might seem confined to waveriders, surfcasters and, to a lesser degree boaters, I mentioned above they can ravage beaches, impacting one and all.

Making things more complex this year – and likely throughout winter – is the drought pattern we’re experiencing. Significant droughts are not just localized quirks. They often represent larger changes in weather patterns, even on a national scale. Might the storms moving out and blowing up over the ocean be a sign of rainmaking low pressure systems being cycled off into the ocean -- systems that would have otherwise rained down upon us? I should note that the Southeast is in far worse drought shape than us. As you know, they often are the first to get moisture from storms that then move toward us.

A theory worth entertaining?: The warmer ocean and its storm empowering abilities might draw storms out to sea, storms that would usually hug the coast. This is not to say big-ass storms won’t still wrack the coastline, but long-term reduction is the number of coast-hugging storms might be seen over he next decade or two. 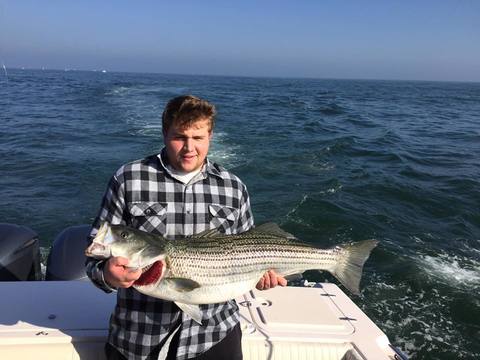 Daniel DiPasquale  Took the gamble down south today to hunt down some bigger fish and it payed off big time! Put our time in and pulled some real nice fish. Still amazed at how fast these fish move, chased this particular body from Asbury Park last Sunday all the way down to Atlantic City today. An epic week of fishing for sure, have met some great people and shared some awesome times with friends and family. One of the very very few reasons why I love the Fall!

I think Jake became a man today. It was chilly out on the sandbars and he handled it like a pro. Tons of bait and bass, but a tough bite.
— with Jake Ruczynski.