Sunday, November 06, 2016 Late-day update (full daily blog below): Headed to Holgate where the turbidity from the replen ...

Late-day update (full daily blog below): Headed to Holgate where the turbidity from the nearby beach replenishment has given the water an awkward looking tint ... not unlike sewer water. Sorry, but that's the shade. However, the water is not in any way polluted, just dingy.

As I note down below, the turbidity might actually help the bass bite a bit ... though not for me. I threw my arm off and registered zero on the bass Richter Scale. I was going to stay after dark, as a load of sunset anglers arrived, but it was getting downright nippy out there ... and besides I wanted to take in some NASCAR. Fat chance. I think NASCAR should schedule races in any areas suffering from a drought. The race will immediately bring rain.

As to no fish, no biggy for me. They're actually annoyances; all work intensive to bring in, then all slimy ...

Joe Handley Jr
Yes sir. I only kept three as I was thinking most were probably big females. Didn't want to take too many breeders out of the gene pool. Lost one right in the wash that was a giant...easy 17-18". Biggest one I've seen in years. Yeah Jay, every hole north of the causeway had them in it. I had hooks that were way too big otherwise I could of filled a bucket. Going for lunch, picking up the correct rigs, and heading back out. Small bits of clam were the ticket, and hold the rod. Bites were extremely light. Fish were cold to the touch so I assume they are very lethargic. 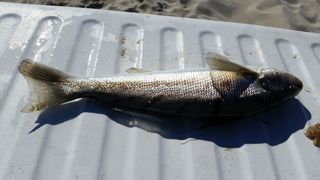 Here's yet another one of those what-are-you-thinking things I run into. I was trying to come off the beach and this vehicle had simply parked -- blocking entrance/exit to/from the beach. Oh, there was nobody in it - or even in sight. They had apparently moseyed elsewhere. Any buggyist will tell you it's a bit of a bitch backing down these new long ramps, trying to make sure no beachgoers (and pets) are using them right about then. I eventually just moved on. I scrambled the photo so no plate info can't be seen. I'm guessing the driver just didn't see the "Buggy" sign. 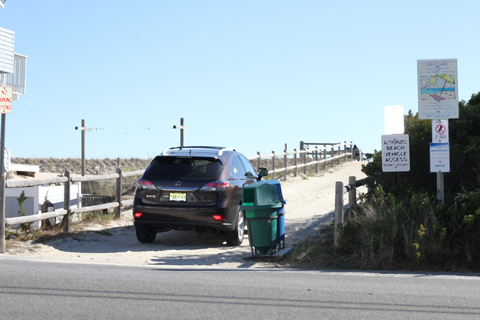 "Was out 3 of the last 4 days and every day felt like Election Day, decisions, decision. Do I go outside and run the beach looking for bass or do I stay inside? Thursday we did a little bit of both.  Running past Seaside we could not find any bass or bunker for that matter. Got some great looks at dolphins though. Coming inside we moved around a lot to find the bass. Using live bait we were able to land four schoolies. Attached is a picture of Ryan Miller with one of them. Saturday it was returning fisherman Terry Jumper and his friend Guy. Fishing around the inlet we were constantly rocked from the parade of boats heading out. The inlet is not this crazy during the summer! For an hour and a half after sunrise there was just boat after boat heading out and making a left to run up the beach. Looks like the State will being getting a lot of money from boaters with the new gas tax. Well, based on Thursday’s results we decided to stay inside unless intel told us otherwise. Good thing we did, there was not much of a bite and most boats got skunked.  And the Debbie M is not like most boats J The crew worked hard for two bass. Sunday, I had the Story crew out for a short trip to do some nature viewing and a little fishing. I started off going up some saltmarsh creeks. I was hoping we would spot a Bald Eagle since they are around now, but we did not. Flushed up a bunch of buffleheads and black ducks along with a marsh hawk. With time left in the trip we switched over to fishing and Sue Story landed her first striper on the first drift. The crew landed 3 bass with little effort.

On the nature side of things: Barnegat Bay is starting to welcome its winter visitors; ducks, loons, and cormorants. At a time of year when most may think of things migrating south for the winter we are the south for many species of birds like buffleheads, mergansers, and scaup. The bay is alive 365.

Note: It gets late early now … Sunset is an hour earlier. I hate it, though it does feel so re-birth like when we get that hour back in spring. Sunday, November 06, 2016: Instead of backing off, the winds found some new high-pressure energy. It is brink out there this a.m. – and doesn’t seem to be baking off ad I head out for some plugging.

The ocean is so clean for much of the island that it’ll take sheer luck and perseverance to sucker in a striper of any size. Think sunset and after dark.

For a change, the far south end of LBI offers a decent chance at keeper and even Classic bass. I’m not sure why, but the water there has been sorta turbid. A not-bad thing when opposed to the crystal clear everywhere else on LBI.

I’m also basing that on a 31-incher taken yesterday afternoon out by an angler who said he usually fishes the north end. He was using a larger bottle popper – this a touch of pencil popper to its shape.

Then I saw this at lbift.com: 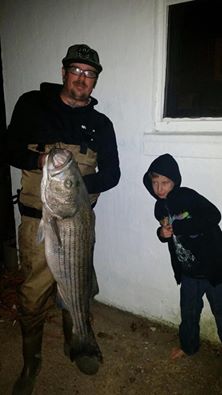 Hey, it’s been quite some time since the far south end has been in the spotlight. And I’m not “burning a site” since the area is 2.2 miles long. And I got my fish far from the end. Just keep in mind that the area is heavy with beachwalkers. Steer well clear of them if buggying the beach … though I met a couple guys walking all the way to end with rods in hand.

I know I’m stretching the point a bit – since the hooking has been so downright dreadful it’s had to make out a bite pattern -- but it sure seems plugs are holding their own against bait this fall. I might attribute that to the fact a plug simply covers more ground than bait pinned to the bottom.

When fish are as scattered as they are now, it doesn’t hurt to go humping the boonies after them (plugging, especially popping) -- as opposed to sitting in a stand and waiting for them to come to you. Wait, I think I just mixed two or more scenarios there. But you get the concept.

Relating to when I used to do a lot of boat bassing in the fall, we’d hump about on a troll until we got some return fire on likes of umbrellas. Then, we’d cut the engine and commence to jigging. I bring that up since plugging around can light on a hot spot, leading to chunk chucking. Folks like me would I’d rather walk point and then let others take over with the heavy stuff … like bunker heads and even eels. At least I think folks still fish eels in the suds.

This has become a bit rare: This is rarer still: 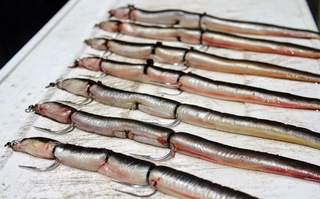 All because the likes of these have become so advanced ... 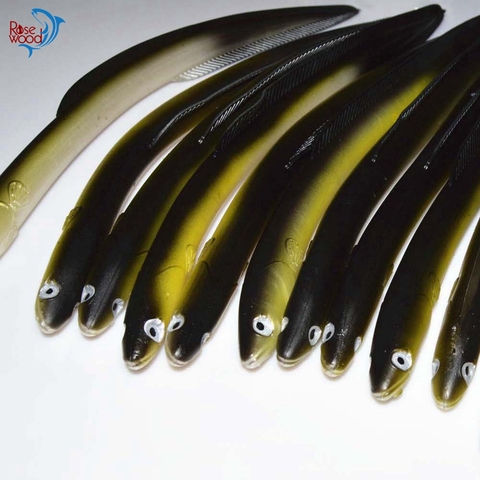 Clear water plugging like this requires a slowest-of-all retrieve, though it does help to throw in small spurts of speed, which can spark trailing gamefish into action I can’t count the number of bass and bluefish attacks my plugs have taken when allowed it to sit dead in the water after a speed spurt.

One of the best surfcasters I’ve even known would even spike a rod after casting out a larger surface-swimming plug – conditions allowing, i.e. straight west wind. He’d then walk away and sip some of his perpetual coffee, eventually walking back over to get the plug moving again -- and … bam! He talked of times he’d have his motionless plug blasted before he even got back to his beverage. He’d have to run over to the rod … bait-fishing like. I’m way to AD/HD for that, though I always throw in that occasional ten-second pause, especially when poppering.

By the by, I'm still not seeing bunkie pods like we should have by now. Rainfish reign. Spearing are still around, mixed in with rainfish. Also, there remains a remarkable showing of (striped) hardhead minnows -- s***heads to some folks. 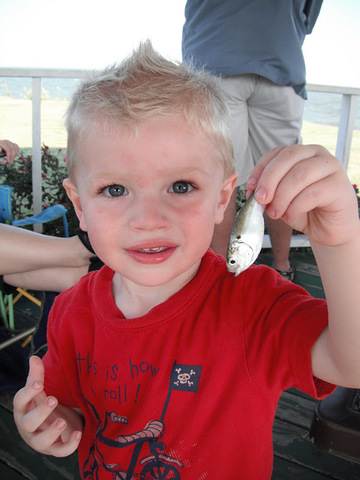