It's the season of the evening games, right? Selling at Walmart.

Sunday, May 26, 2019: It’s tough trying to glean a fluke fishing pattern after only the first few days of the season -- so I’ll only insinuate that we’ve begun in a small way. Oh, there are plenty of flatties but experts I know – who live for this meat fish – have recorded as high as a dozen-to-one throwback-to-keeper ration. I had one Great Bay angler who said he lost count … with nary a single take-home.

The LBI surf momentarily has a much higher keeper rate, though you can go with nary a fish for long stints.

For some inexplicable reason, I do disproportionally well fishing for fluke in the suds, likely due to my emphasis on adding life to my jig when it reaches within ten feet of the shore. In the last few feet, I concentrate on seductive jumps or a sidearm bottom-crawl action. Also, I rely on a conventional reel on a slow rod – apparently, it’s politically dicey to call it a stiff rod.

One of the better surf fluke anglers I’ve ever seen, the late great Uncle Gus of Ship Bottom, would sometimes only flick his bait out, underhanded. He wasn’t into casting it way out and dragging it back into the in-close hit zone. I still cast further out thinking I might increase my flattie odds by drawing in a couple famed “followers” from out in deeper water. Still, it’s on that trough upslope – sometimes right on the shorebreak waves – that the fun usually begins when surf fluking.

Put one in the boat this morning

With short fluke prevailing, I’m obligated to assume my harangue posture, lecturing about the high mortality rate of improperly handled and poorly released throwback fluke. Yes, I’m the same soul that absolutely ridicules the out-there suggestion that over half of all striped bass don’t survive catch-and-release. That’s nonsensically high. Ten percent tops with stripers. However, fluke are whole other delicate animal. I sincerely fear a 30 percent mortality rate on a crazed mega-fishing weekend like this one. Many an underexperienced angler catches many an undersized fish – and fail miserably at performing a survivable release. Then, there are a slew of fishermen who literally get pissed off at so many small fish … and taking it out on the shorties, getting more and more careless with each successive unhooking and throwback.

Far-and-away the worst insta-killer of fluke is being humanly pressed too hard on that tiny packet of innards toward the gills. It’s the prime grab point when trying to control a slippery, flap-inclined flattie. Pressing the innards to just a moderate degree and the fish is dead meat – but will swim off despite being doomed. Even flipping an unhooked fluke high into the air when releasing can jar it into a discombobulated and vulnerable condition. It’s easy pickings for predators, which are often drawn to a flotilla of fluking boat knowing easy eats are being thrown in, almost like chum. Just about anything that can take a piece of a wounded fluke does so. Bass eat them whole; bluefish tear them asunder; crabs gang gouge their bodies; cormorant ravage them; seals seal their fate, etc.

Despite summer flounder being yet another non-hurting fishery – the biomass is massive – due respect must be shown … legally. I have heard of anglers being ticketed by Fish and Wildlife for careless releasing of fluke. Not sure if that’s true but if it gets you to release with more care, I’ll run with it.

Bassing is off a bit, though it could very well be the instant emphasis places of fluking. A couple cow bass came out of the LBI surf. See below. On a whole, the beaches were so insanely packed in many places to where surfcasting wasn’t even a viable option. As to boat fishing, I heard very little of a striper nature on the radio. Small stripers were being caught off the submerged portion of the North Jetty.

Blue fishing was fair to good – though phasing down … unless we get another school coming up from the south. Cocktail-size prevailed, with some slammer running the beachfront.

Loads of skates; suddenly more than usual. Sandsharks (dogfish) also taking a bite out of bait.

Blackdrum not showing well at all, despite those amazing takes in Delaware Bay.

Despite the crowds, this captain found a cove worth of solitude west of IBSP ... 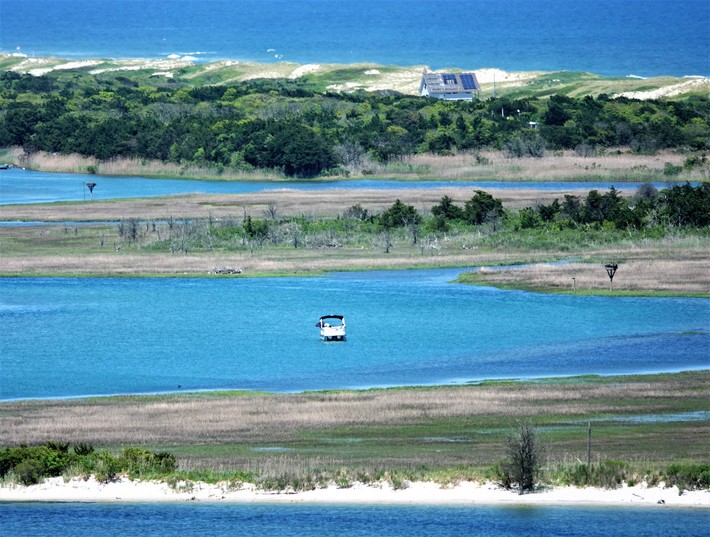 This catch was an NJ state record for a couple years; taken in Holgate on metal. It was beat out by a boat-caught fish. No fair. My one glimpse of glory with IGFA -- and look at what they put down as a location. Where?! 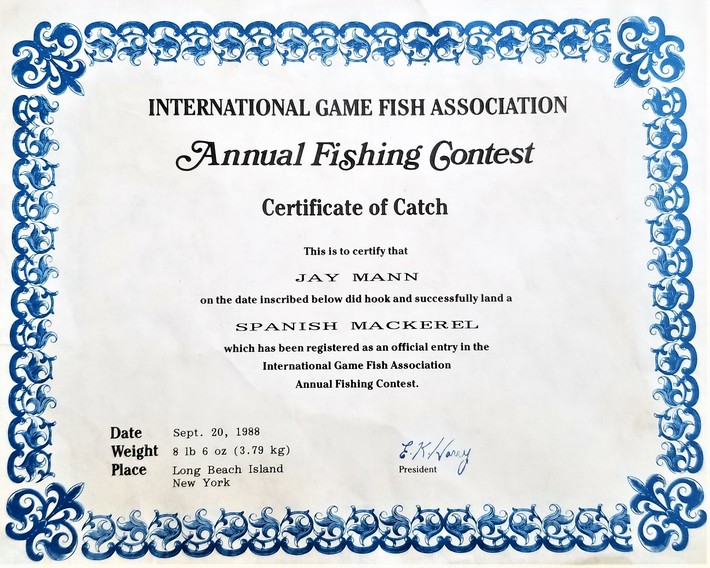 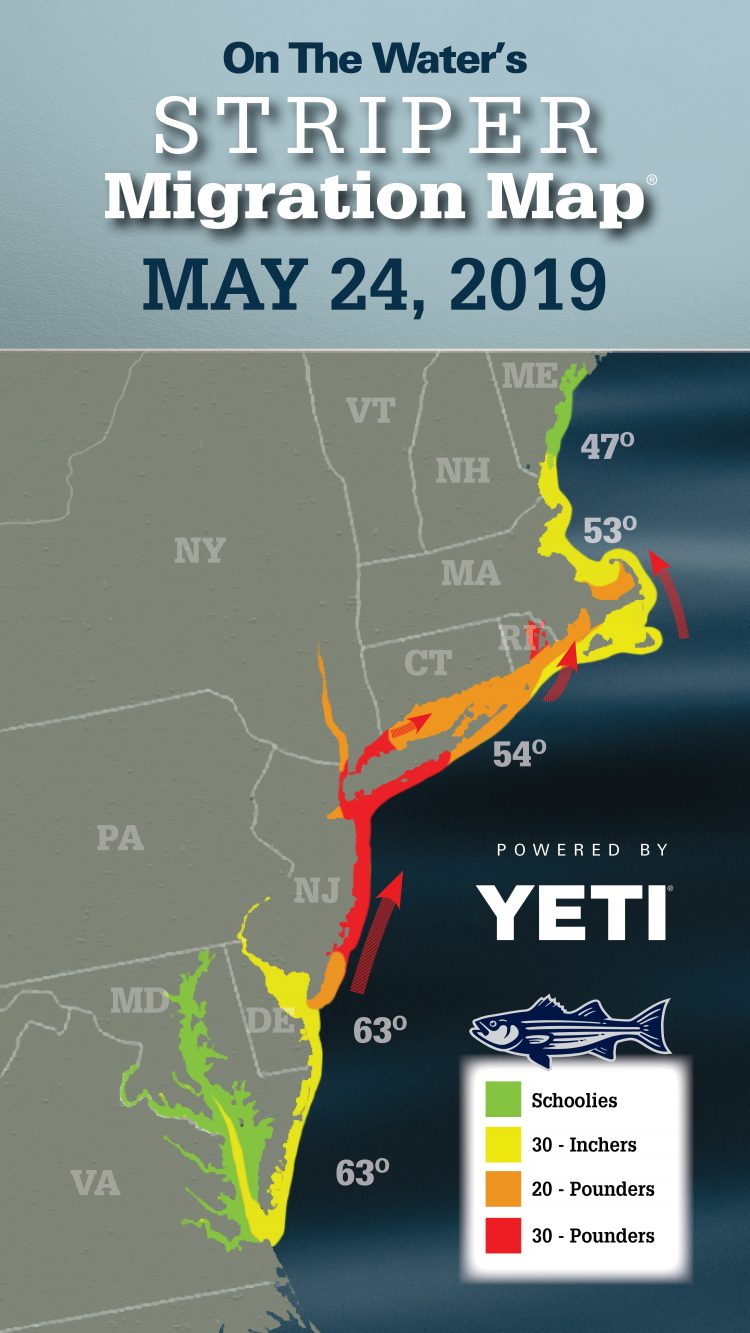 G got his personal best striper today!! 45 pounds on the hand scale!! Heading to the LBI Cup weigh-in now. We’ll see what happens... 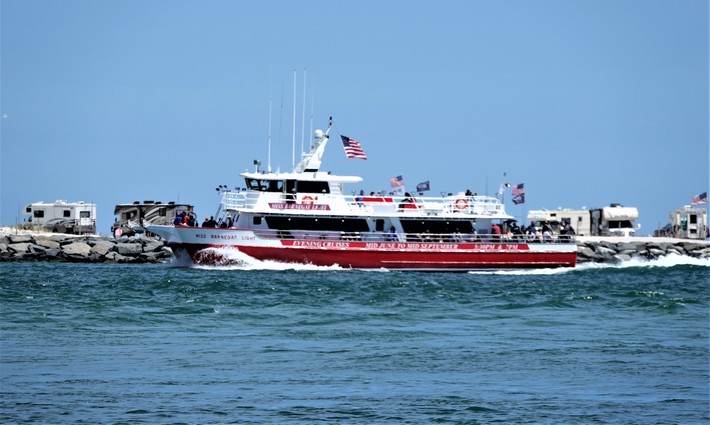 Ran our first trip today. Lots of wind had us adjust the plan especially since there were a good amount of bluefish by our inlet. Spent time there jigging some fish. Went out in search of fluke and sea bass, but the wind made fishing very difficult. Back out again tomorrow. If we have a shot at some bluefish we will take it before searching for some fluke and sea bass.

Some sea bass and fluke in the boxes today. Handful of fluke seems like they are their usual selves not biting well with colder water. Did see some nice sea bass. 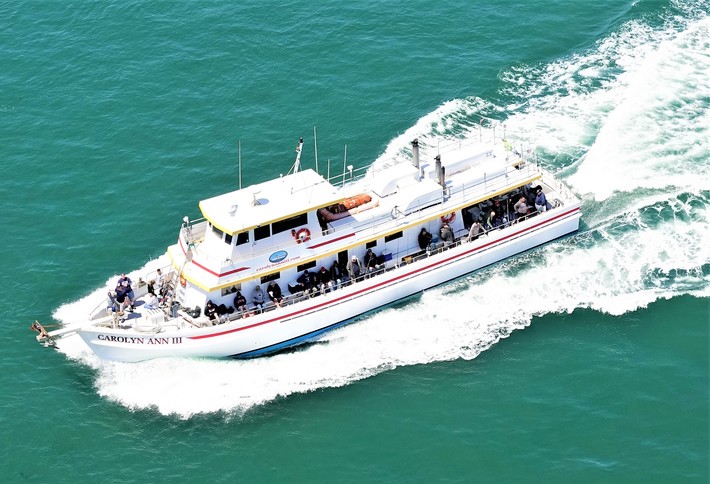 (Above: My photo today as below cam in  ... 5/25/19)
What a beautiful day on the ocean! Doesn't get any better then today. Fishing was a bit slow on some wrecks and others produced some nice Seabass and ling. No limits but almost everyone caught fish. Pool winner was about 4 lbs. caught by Ted Soo of West Ampton NJ. It was great to see the kids out fishing. Bring them out! The weather is finally great, don't wait. See you tomorrow!!

First Fluke trip of the year. Had a fun day on Great Bay with Dad and Victor Jr!!!
Victor was high hook with 11 fish and 1 keeper!! I added a keeper.