Sunday, June 23, 2019: That was one sweet weekend -- but must talk about awful wreck in Ship Bottom

I did a little seated oyster shucking down Tuckerton Creek way ... (Friday) 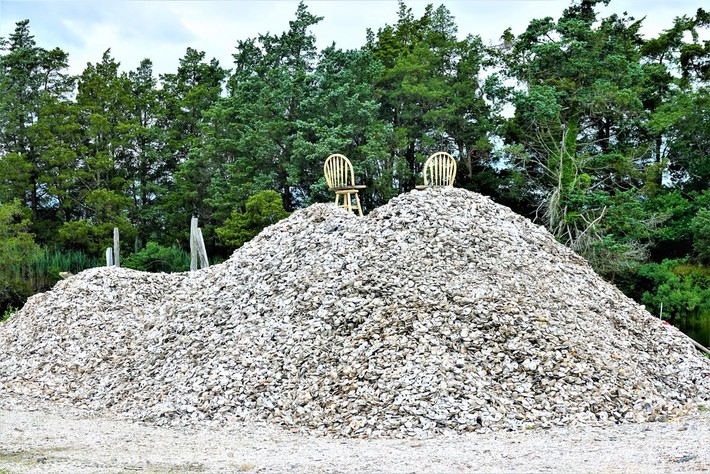 Sunday, June 23, 2019: That was one sweet weekend, even if the winds weren’t playing all that nice yesterday. There’s more than just fishability to take into consideration when rating Island days.All told, it rated high up on the fun weekend scale.

Today's die-down of the westerlies – before shifting to light southerlies – allowed for some good to very good fluking, along with some wreck fishing.

We’re drifting into a stint of hot to way-hot conditions. Winds shouldn’t be all that troubling, but T-storms will take on a very summerish mood, i.e. popping up whenever things go 3H -- hazy, hot and humid.

I got into the surf for a quick cool-down during beach volleyball today. The temps are already quite mild for still early in the summer. Some folks called it 70s while my thin skin was feeling upper 60s, tops.

With the upcoming heatwave, we’ll surely see waters in the 70s for the upcoming holiday weekends. With July 4th falling on a Thursday, both the before and after weekends can pass as holidayish. More than a few folks intend on squeezing work holidays out of both.

Between headboats and open charters, there are plenty of opportunities to find some boat fishing. Check the SandPaper – and Google -- for boats and times.

INTO THE DARKNESS: I’m not big on covering traffic accidents but the fatal crash in Ship Bottom Saturday morning begs me to make an exception. It was ugly and inexplicable.

I’m getting reports about it from many directions, including official sources (off the record). The indisputable angle is the driver/victim’s speed and deadly erratic driving. Multiple police forces were alerted to a Toyota sedan traveling southbound on the Boulevard at over 100 mph. There was apparently a radar reading of 110 mph taken in Harvey Cedars.

When the vehicle reached the mandatory exit from the Boulevard (Ship Bottom) for southbound traffic (onto Eight Street, outgoing Causeway at Oscar Huber) the driver instead shifted over into the usual northbound lanes, driving against the traffic flow. He continued the wrong way through the “circle.” Witnesses in the area of 7-11 vicinity confirmed the driver’s speeds were still high.

Returning to southbound Boulevard lanes, the Toyota driver then sped toward the traffic signal at 11th Street and the Boulevard, where a Roselle trash truck and a pickup truck were stopped at the red light. He struck both vehicles at breakneck speeds, seemingly hitting the garbage truck worst. There are indications the sedan then flipped across and over the bed of the pickup. Pieces of the wreckage were strewn for half a block.

Nearby residents said there was a loud squeal of brakes prior to the crash. That could mean there was at least some braking effort by the driver, though the force of the crash indicated it was far too little far too late.

The shaken drivers of the impacted trucks exited their vehicles, with the pickup’s driver becoming sick in a nearby parking lot.

“On June 22, 2019 at approximately 6:00am, Ship Bottom Police was advised by officers in another jurisdiction of an erratic driver in a four door Toyota that had passed them in excess of 100mph on Long Beach Blvd. That officer and officers from another jurisdiction turned around to maintain observations of the Toyota at a safe distance as it continued into Ship Bottom. There was no vehicle pursuit, whatsoever.

“The Toyota entered Ship Bottom and became involved in a motor vehicle accident at the intersection of Long Beach Blvd and 11th Street.

“Preliminary investigation revealed the driver of the Toyota, a 60 year old male from Conshohocken, PA was traveling at an extreme rate of speed and impacted a Roselle Garbage Truck and a Ford pickup. Both vehicles impacted were stopped at the red traffic signal at the intersection, with the dump truck in the right lane and pickup in the left.

“The driver of the Toyota was transported to SOMC where he was pronounced deceased.”

AFTERTHOUGHT: I’m a highly compassionate person and truly feel pity for the friends and family of the deceased, along with the officers who were on the scene only seconds after the crash. Even under the slight chance this was medical emergency -- and the insanely speeding driver was trying to rush himself to the hospital (one suggestion among many) --  this entire scene spooks and angers the hell out of me. Face it, those vehicles stopped at that traffic light could just as easily have been filled with families coming on the Island. In fact, think of all our family and friends that stop at that light. It was purely happenstance that trucks, able to take the insane impact, were there at that moment. I don’t want to even ponder any pedestrians that might have been crossing the Boulevard at any point along the driver’s multi-mile high-speed path. Again, I feel awful for those close to the victim but more for what he has put them through – through no fault of their own.

If this was an intentional act -- and it might be hard to prove actual intent -- I see this as an indiscriminate attack with a deadly weapon; the reckless use of deadly force akin to shooting blindly into a crowd. If, as popular consensus suggests, it was a suicide run, it was equally murderous. Even if it was just a case of a hyper-crazed or alcohol-driven joyride, it still had death written all over it.

Obviously, the complex legal interpretation of what happened at the crash scene will likely offer exacting details of the accident itself, though that information is not always shared with the public.

Everything I’m opining on is based on my read of the 100-mph-plus actions leading up to the fatal impact. I guarantee there is no excuse for the public endangerment that transpired.

Only small blues and fluke for us today, but we pulled our crab pots on the way in and got 31 nice keepers!! We’ll take it!

Stripers and blues on the morning run! Spanish mackerel, bonito and blues for the afternoon run!

Today's Beach Report from Beach Haven.
Thank you to "Shorty Long and the Jersey Horns" for starting out their first set with the "Star Spangled Banner". They were at the Shell and could he heard clearly on the beach. One of the best bands on LBI!!
Water a bit chilly but nice and clear. Happily, water rescue was not needed today.
Next weekend Sheila should be back to beach reporting.
Best of all Kenny's coming home!!!

Today we started off with a stiff West/North West breeze and a lot of grass. Chris, picured here with his solid 20 inch keeper fluke, stayed patient and managed to scoop this keeper on the second to last drift, on the incoming tide. Nice going Chris! Hope to see you and your friends again in the next few weeks! We are fishing tomorrow morning in the bay so if you want to catch some fish while you are in Beach Haven, fishing with us is the way to go!!! Give us a call!

So far so good

Starting Monday June 24th, Surf City Farmers Market will start for the summer, with having one every Monday morning!

Earth's Magnetic Pole Is Wandering and Geologists Don’t Know Why 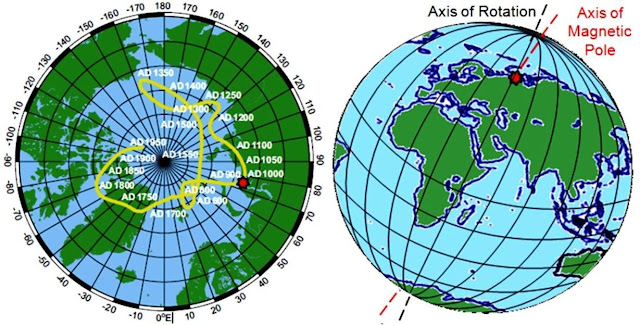 The planet’s magnetic field is up to mischief again and geologists are pretty dumbfounded.

Earth’s magnetic poles can wander several kilometers every year, however, the north pole's movement has become increasingly stranger in recent years. For reasons that are currently unclear, the magnetic north pole seems to be increasingly slipping away from Canada and towards Siberia at an erratic rate, according to a news report in Nature.

Something strange is going on at the top of the world. Earth’s north magnetic pole has been skittering away from Canada and towards Siberia, driven by liquid iron sloshing within the planet’s core. The magnetic pole is moving so quickly that it has forced the world’s geomagnetism experts into a rare move.

On 15 January, they are set to update the World Magnetic Model, which describes the planet’s magnetic field and underlies all modern navigation, from the systems that steer ships at sea to Google Maps on smartphones.
The most recent version of the model came out in 2015 and was supposed to last until 2020 — but the magnetic field is changing so rapidly that researchers have to fix the model now. “The error is increasing all the time,” says Arnaud Chulliat, a geomagnetist at the University of Colorado Boulder and the National Oceanic and Atmospheric Administration’s (NOAA’s) National Centers for Environmental Information.

The problem lies partly with the moving pole and partly with other shifts deep within the planet. Liquid churning in Earth’s core generates most of the magnetic field, which varies over time as the deep flows change. In 2016, for instance, part of the magnetic field temporarily accelerated deep under northern South America and the eastern Pacific Ocean. Satellites such as the European Space Agency’s Swarm mission tracked the shift.

By early 2018, the World Magnetic Model was in trouble. Researchers from NOAA and the British Geological Survey in Edinburgh had been doing their annual check of how well the model was capturing all the variations in Earth’s magnetic field. They realized that it was so inaccurate that it was about to exceed the acceptable limit for navigational errors.

“That was an interesting situation we found ourselves in,” says Chulliat. “What’s happening?” The answer is twofold, he reported last month at a meeting of the American Geophysical Union in Washington DC.

First, that 2016 geomagnetic pulse beneath South America came at the worst possible time, just after the 2015 update to the World Magnetic Model. This meant that the magnetic field had lurched just after the latest update, in ways that planners had not anticipated.
Second, the motion of the north magnetic pole made the problem worse. The pole wanders in unpredictable ways that have fascinated explorers and scientists since James Clark Ross first measured it in 1831 in the Canadian Arctic. In the mid-1990s it picked up speed, from around 15 kilometres per year to around 55 kilometres per year. By 2001, it had entered the Arctic Ocean — where, in 2007, a team including Chulliat landed an aeroplane on the sea ice in an attempt to locate the pole.

In 2018, the pole crossed the International Date Line into the Eastern Hemisphere. It is currently making a beeline for Siberia.

The geometry of Earth’s magnetic field magnifies the model’s errors in places where the field is changing quickly, such as the North Pole. “The fact that the pole is going fast makes this region more prone to large errors,” says Chulliat.

To fix the World Magnetic Model, he and his colleagues fed it three years of recent data, which included the 2016 geomagnetic pulse. The new version should remain accurate, he says, until the next regularly scheduled update in 2020.

In the meantime, scientists are working to understand why the magnetic field is changing so dramatically. Geomagnetic pulses, like the one that happened in 2016, might be traced back to ‘hydromagnetic’ waves arising from deep in the core1. And the fast motion of the north magnetic pole could be linked to a high-speed jet of liquid iron beneath Canada2.


The jet seems to be smearing out and weakening the magnetic field beneath Canada, Phil Livermore, a geomagnetist at the University of Leeds, UK, said at the American Geophysical Union meeting. And that means that Canada is essentially losing a magnetic tug-of-war with Siberia.

“The location of the north magnetic pole appears to be governed by two large-scale patches of magnetic field, one beneath Canada and one beneath Siberia,” Livermore says. “The Siberian patch is winning the competition.”

Which means that the world’s geomagnetists will have a lot to keep them busy for the foreseeable future.