Sunday, July 14, 2019: It’s becoming the summer of the panfish – and it’s made up of the tastiest of the little buggers to boot. 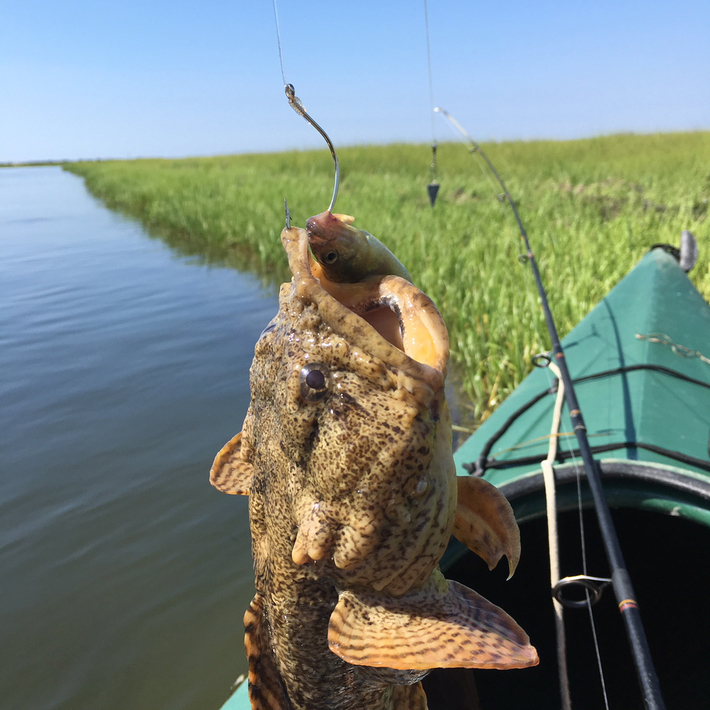 Sunday, July 14, 2019: It’s becoming the summer of the panfish – and it’s made up of the tastiest of the little buggers to boot.

As kingfish continue to present themselves better than they have in many decades, the bayside blowfish presence has exploded. Chum-issuing anglers are taking them by the 50 count. These are spawned out fish. Two folks told me they have never caught so many. Young’uns must not have been around during the blowfish plague years back in the 1960s.  And I’ll confirm here and now that you didn’t even need bait back then – only a gold hook and a good eye; you could mug them.

Buddy Paul P. had a puffer story to tell. He motored out to a bay area he knew was loaded with blowfish. He got ready to loose some chum – and realized he had left his chum bucket way back on the dock. He hadn’t forgotten the chum itself so went MacGyver by emptying his flare bag, cut strategic holes in it, filled it with tasty goop, weighed it down with sinkers and threw it overboard. “I didn’t really expect it to work,” he told me at church. Not only did it work, he took “nonstop” blowfish. His jerry-rigged bucket is now his go-to chum bag. As to the flares …

Every year I get asked where one can buy blowfish tails. I never have an answer, even when I tell them I’ve heard puffers sold as “squab.” I don’t think there’s a commercial way to harvest them from the bay, where commercial seining regs in the summer are kinda strict. Best bet is to find some fishin’ folks who are caching them to excess and see if they’ll give you some. Remember: You can’t buy or sell them.

Was told an interesting crabbing tale. A buddy using both bunker and kingfish racks couldn’t believe the crab preference for the kingfish – and he kept switching things up to make sure the favoritism was real. It was. Keep those kingfish remains for the blue claws.

Less exotic but noteworthy is the huge oystercracker toadfish (see below) taken in the back bay. Anybody who grew up on LBI recalls walking the bayside mud flats at low tide and turning over debris. Any piece of larger junk would always have an oystercracker holed up beneath it. Probably still true nowadays. Wait for a blowout tide and give it a try. They have a dorsal fin that’s supposedly toxic.

There are enough houndfish out there to warrant a rundown mention. This highly overgrown type of needlefish can get many feet long. The longest recorded houndfish was 4.9 ft; the heaviest (different fish) was 14.0 pounds. Those now being caught in Jersey in the summer are quite large. The largest one I have ever seen was when spotting at night off High Bar Harbor. It was an easy four feet long. Needlefish get stunned by the light beam in the dark and just sit there … until touched. Then it’s water explosion time.

Below: Caught July 4th about midnight in eelgrass near the bulkhead at W 76th St. Harvey Cedars by Tricia & Erin Doris. 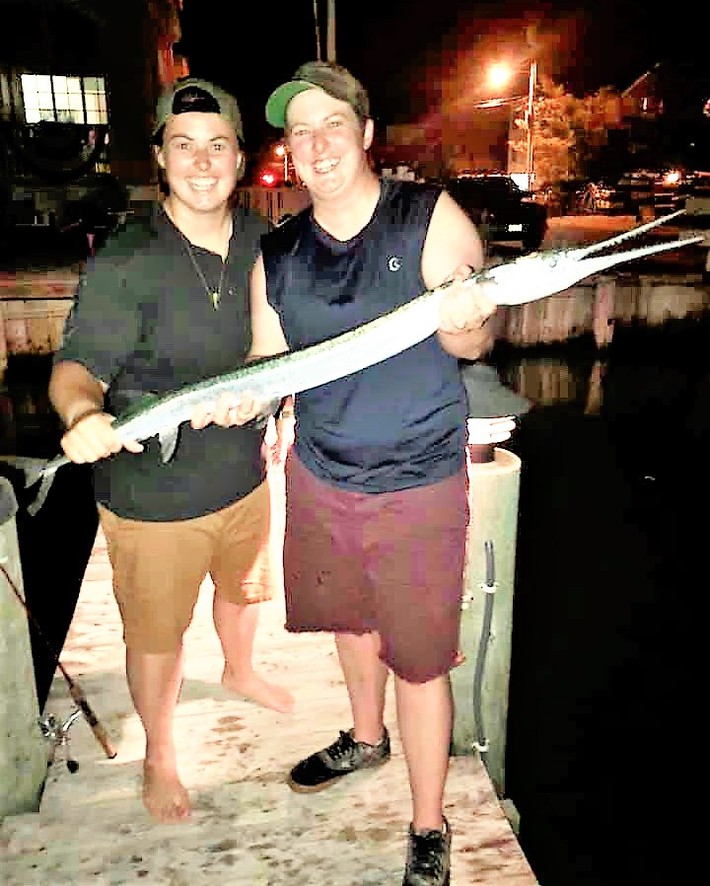 Houndfish is yet another semi exotic species coming our way rather out of the blue. A few decades back, a single houndfish might have been frontpage fishing news. Just this summer, I’ve gotten over a dozen reports of them being caught -- ocean, bay and inlets. Such hookups place houndfish on the angling radar – in a good way. To our south they’re sometimes thought of as nuisance fish. Not here. They’re wild to catch and, uh, good eating.

Don’t listen to me on that last one. Although I see a couple recipes for them, I have no way of knowing -- firsthand -- if they’re palatable. Visually detracting from their flavor (huh?) is their having markedly green bones, a turn off for diners in some societies, like ours. I’m predicting they must be a bit bony -- I mean, anything with green bones surely likes to show them off, right?

Had one plugging success report consisting of two striped bass taken on smaller swimming plugs tossed in the early a.m., north end. One was a keeper but released. Fellow has never kept a striped bass – and he has taken oh so many. That constant-release syndrome is not unusual in NJ. I often bring that up when complaints come in about bass being kept.

As is so often the case, you mention that something has gone mysteriously missing and it shows up in schools of spades. Massive cow-nosed ray schools are skirting our beachline, in one felled swoop. Sightings have come in from bathers and lifeguards along most of LBI. They’ll likely hang around in the surf providing they find enough tasty crabs, including sand crabs/fleas. Those stingray schools are unpopularly inclined to make highly destructive forays into the bay, where they go after small shellfish, including those being farmed. They uncover the clams by using combined wing power to stir the bottom and expose the buried bivalves. Down in the Chesapeake, where they can be a massive pain, they leave behind veritable craters where clam beds once rested.

Below: Check out the size of this oystercracker (toadfish) caught from a kayak by Keven Tedesco. I've been around them for eons but not this size. I'm guessing Keven was drifting near a sedge island overhang, where they lurk in the dark. Smaller version of this toadfish can be found at ow tide by turing over debris in the mud. Don't mess with them as they have a nasty possible toxic dorsal. It's one of the few things I've never been stung by.

I knew this reminder/warning was coming:

If you think about it, this is a kick to the groin of surfcasters. The three most common near-beach species cannot be targeted, namely the sandbar (brown), sand tiger and (great) white sharks.

Out at sea, boat fishermen can rig for a slew of can-keep sharks, like spinners, threshers, makos, bulls, blues and many others. Admittedly, there are also a huge assortment of off-limits sharks out there. The difference is you can still honestly target keepable sharks without incurring Big Brother's wrath. Shark anglers on the open sea can say they're gearing and chunking for gray suits that can legally be retained. That said, there is now the stricter-than-ever law that protected sharks cannot be brought onto a vessel, even if only for photos and such. NB: “Release any prohibited shark immediately, without removing it from the water.”

Back to beach fishing, the odds are kinda low that you’re out there at night baiting big for the unlikely likes of, say, a keepable bull shark, for which the state record remains vacant -- which hints at how many of them we get. I guess it can be said there's the off chance of a surfcaster nabbing a nurse, spinner, blue, whitetip, porbeagle, thresher or (hey, why not) a shortfin mako. The odds of that?

With the sharking heat being turned up by authorities, I highly recommend NOT offering shark photos on social media or in shops. Yes, this is Mister Send-Me-Your-Pics speaking. I just have a feeling the citations could fly, possibly based purely on after-the-fact photo information on the likes of Facebook.

Videos of landed and posed protected sharks, sent to TV outlets, will cost you, guaranteed. That highly-televised landing of the Beach Haven sand tiger shark is likely/partially behind the enforcement uptick, though my paranoia also has authorities reading my columns -- where I praise catch-and-release shark fishing as being a mild compensation for all the other species that have been removed from our surfcasting grasp through regulations.

All this said, there is no way to say surf fishermen bearing heavy gear and wire line aren’t simply out there seeking to finally fill the state record bull shark slot. Should another protected species come biting? Then, it’s absolutely imperative to do a quick and careful in-water unhooking. There is even a slight window of photo-taking opportunity when unhooking a shark in the shallows.

As to illegally hauling a hookup onto the beach, it’s your call. But, I’ll repeat that there’s a high likelihood that this announcement is also an enforcement warning. What’s more – and here’s where I have to step lightly to maintain important friendships – there are many shark-huggers out there who are equipped to expose violators by using cell phones adept at capturing the moment, even at night.

Oh, and please don’t bring up the fact we rarely if ever see Fish and Wildlife officers when fishing. In the case of intensified enforcement, in-office Fish and Wildlife personnel can keep a computer eye out for those social media photo offerings showing obvious violations. Also, lookouts seem to be everywhere ...

The last two days were ok , not a lot of fish but some anglers caught dinner. If the drift would pick up we know so would the fishing. Beauitful time on the water with a lot of marine life around. Hope to see you on board!!

Never caught one of these before.

And just like that, we have a new heavy fish on the season. Hitting the scale just a tad below six pounds, Kevin and Diane boated 3 nice keepers between them, after Kevin had boated a nice seabass yesterday. Him and I were just talking about the sandwiches that seabass made when he hooked into the monster fluke of the day, weighing in at just under 6 pounds, to be shortly followed on the same drift by another hefty 21.5 inch, 3.75 pound fluke. The weight between the 3 fish was 11.5 pounds. A hefty bag to take home for dinner! For those of you who bring their own gear, bucktails and gulp were what hooked those larger sized fluke today.